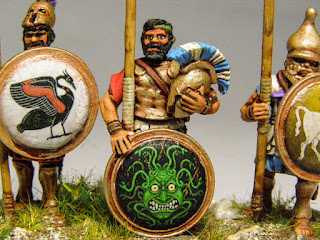 I have been busy painting Ancients since my last post. This time it is the turn of Phalanx's and Hoplites!  As usual I jump around with different time periods like a time traveller, paint brush in hand. 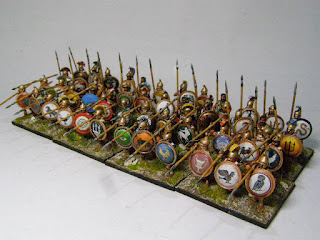 I have had small collection of Thebans, Spartans and Athenians in various states of incompleteness for several years.  I thought it was about time I emptied those boxes with figures still on sprues. 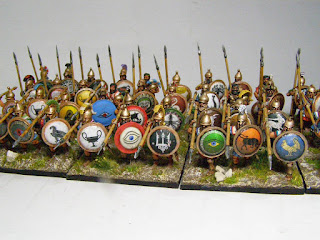 The Athenians are especially colourful, the men being responsible for equipping themselves and bearing the cost.  With this freedom, the wealthier citizens no doubt took the opportunity to make themselves stand out from their fellows. 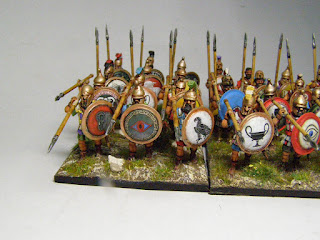 Just recently I became aware of how much unpainted lead and plastic I had stored away awaiting their time for painting.  I realised that I spend too much time painting and not enough time completing units.  I decided to try to speed things up with the Army Painter washes and just experiment..  I have used the 3 shade 'triad' method for a number of years over a black undercoat.  This time I opted instead to go for a white undercoat and do things differently. 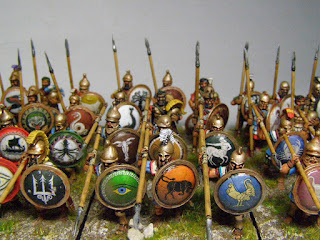 I painted a fairly light shade of all of the basic colours and then applied the Army Painter washes over the top, taking care not to overpower colours that really needed lighter washes, or even dark washes of their own colour (such as the blues).  This proved very successful, and helped things to speed along.  What I found happened was that this method gave me a little more time to focus on colour choices and patterns on the linen armour and take some care with details. 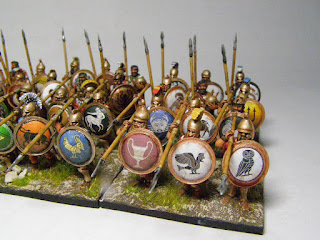 I was unsure about the Foundry bronze colours that I used as they look quite light, and I wondered if the bronze should be of a deeper reddish hue.   It is possible that it was, but I read that great care and pride was taken in polishing armour to get it to shine.  With slaves on hand to clean and polish and short campaigns, I would have thought that a clean bright finish would be quite realistic.
A wash with Army Painter 'Flesh Wash' over skin and bronze armour at the same time provided a nice reddish brown lowlight prior to highlighting. 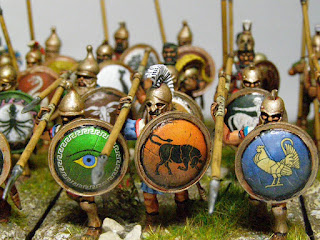 Shield designs (thank goodness for decals!) are by Little Big Man Studios.  Mine were the best part of 10 years old and appeared to have adhered to the plastic sheet.  I found I had to pull the entire sheet off and then cut around the sticky transparent design.  Trying to peel off the cut out design simply was not going to happen.  I suffered sevearal losses with the decals.  I shall know now to try to use decals soon after purchase (ie. not leave it a decade!). 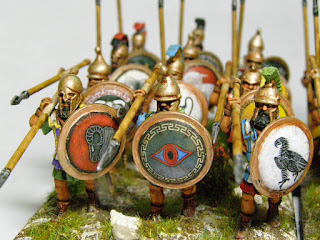 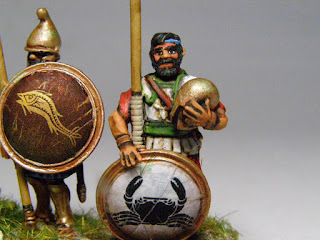 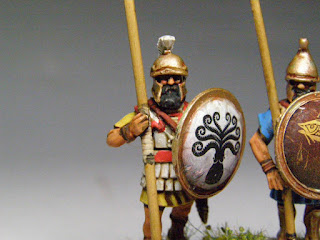 The troops have lots of character about them and a certain presence.  I really enjoyed painting them, though was glad to finish the box!  I split them into 3 groups to paint completely or it would have seemed hard work to do them all in one go. 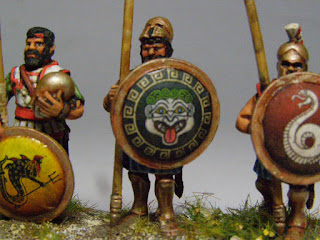 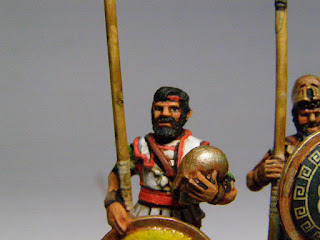 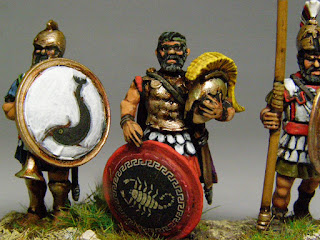 The only criticism that I do have is the number of bareheaded figures.  They look nice for sure, but when some of the men are in full fighting order, it can look a little odd for other men to be taking their ease with their helmets off.  There is sadly no choice to use armoured heads instead.  You get what is in the box and the choice isn't there.  A bit of a contrast to the multitude of options usually found in a box of Perry Miniature figures. 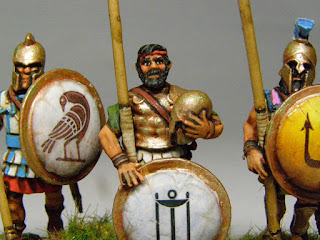 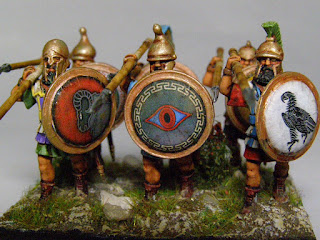 The troops do have a look of momentum about them. 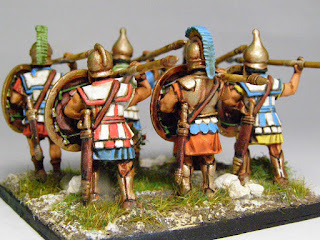 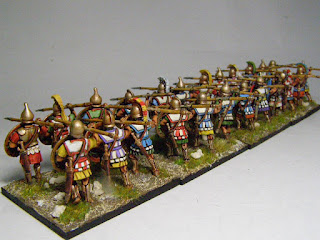 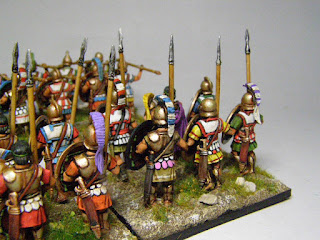 A few more photos to finish off.  I took quite a number of photos as I'm also doing a short photography course and wanted to try some settings on these figures and use these as examples of work on the course (combining my hobby with coursework!).
The first photo on the blog of the Hoplite with Medusa shield and the photo below have both had some processing work to get rid of static grass left inadvertently on figures and also improving light and contrast of the image. 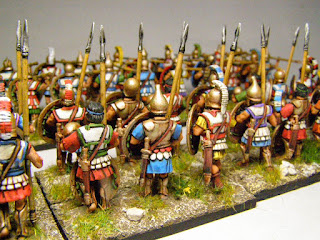 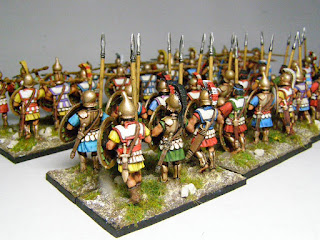 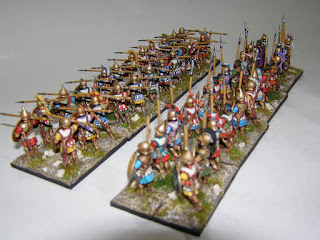 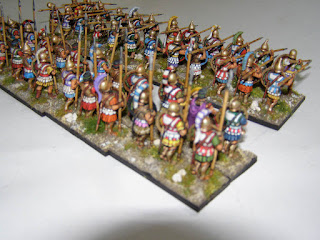 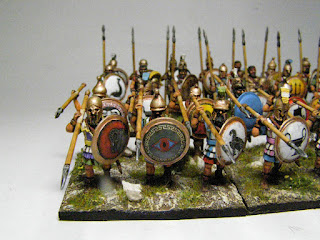 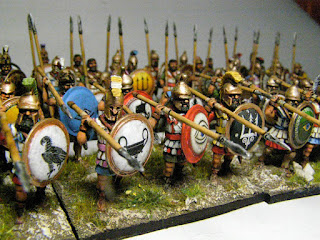 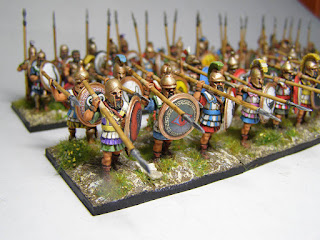 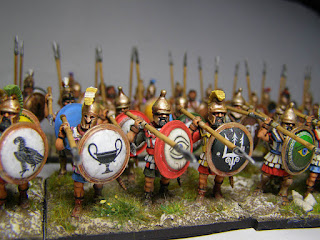 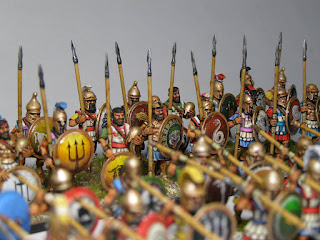