A long Awaited Return for Napoleon

Well it wasn't exactly the 100 days, probably more likely 30 years to the year!  This was how long it was since I last played a Napoleonic game at home.    I shall now tell a tale of wargaming which might appear familiar to some and odd to others - those who might be more efficient with the time management and painting than I.  My paragraphs will be interspersed with the main feature photos to break up my essay! 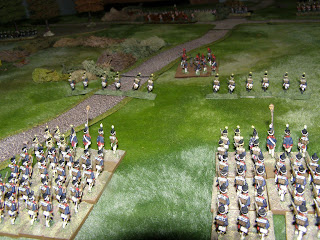 In truth I have been involved in one Napoleonic game since 1988 but that was at a wargaming 'centre' about 15 years ago (a cold shed in East Anglia), and was the worst wargaming experience I have ever had with the most argumentative, rudest set of people that I have ever come across in the hobby - something that has made me VERY careful of who I spend my valuable time with since).  I digress...

Many times over the years I have started Napoleonic armies. In the mid 1980's Airfix and Esci troops were the thing and as a teenager I consumed all the books I could borrow from the school library about Waterloo.  At the same time Esci brought out their amazing Waterloo battle set which was incredibly good timing - I still remember seeing the box in Cheltenham Model Shop and being absolutely bowled over by it. I was one happy guy going home with that! 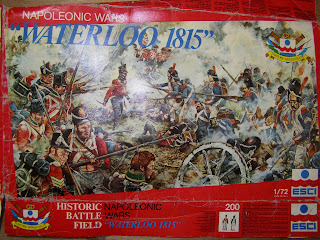 Many conversions followed with trimmed Brown Bess's to make Baker rifles for my modified 95th Rifles, cut down shakos with glue and rolled loo roll to convert Esci Scots Greys into Life Guards - lots of fairly rough and ready conversions but it looked ok(!) as a teenager.

The rules were those which I had devised myself and were very basic but it was fun and many hours were had playing with hundreds of Napoleonic troops on the boards set up over a 'bar football' game which must have creaked under the weight.  The most amazing thing was all of the troops were based on individual pieces of card - so it took flipping AGES to take a turn!  How things have changed as lessons were learned since then.

Well, Ian was my regularly gaming opponent back then and still is now.  On the discovery of the 'Keep Wargaming' shop in Devizes a small collection of 25mm Minifigs began to gather I also had some Prince August moulds (only sold this year) and I managed to build a few units up but didn't get to play with them. 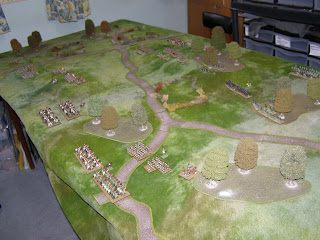 Alas, I joined the regular army in 1988 and away I went for a few years.  Wargaming didn't happen again for a few years until I got a regular post and had my own room to do my hobbies again.  This time it was mostly 25mm ECW using Forlorn Hope rules.  Regular wargaming didn't happen again until more recent years (probably about the time I started this blog).  Several years could happen between games for a couple of decades, but then rules were pretty poor and only Fire and Fury and 'They Died for Glory' were inspirational and these were later 19th Century rules. 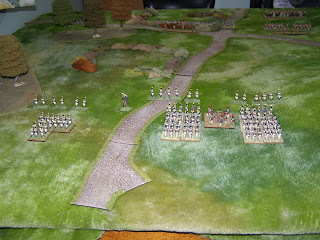 In the early 1990's Ian sold his 15mm collection of Napoleonics to me.  I thought I would do something with them. For some reason I based them in 50 man units and tried to use the Barry Edwards set of rules which I hated. So Napoleonics was put back on the back burner again.  Ten years ago I got General de Brigade which looked good and so started a 28mm collection. This proved hard work to paint.  I switched to 18mm AB, painted one unit, and found this even harder!  They are such detailed figures that I really felt I had to put all the lace on so I did - but it took a long time and the rewards did not match the time taken.  I bought the Perry's 28mm Waterloo French Infantry - in greatcoats.  These painted better but I still only wanted to paint 4 men at any one time...whereas normally I would paint up to 24 men for other periods!  So I painted any other period except Napoleonics.  Napoleonics became the period to start 'next year'. 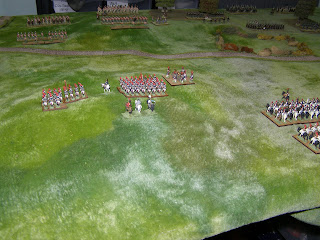 I still read the Napoleonic books and watched Sharpe and the interest has always been there.  I have more recently become more aware of the passage of time and also of ground scale.  The realisation that I would probably never paint all of the units of Waterloo and also that having a board big in 28mm would mean it being enormous! And also unplayable in an evening - even over a weekend - or even a week!  So I made the decision to switch to 6mm.  This would mean I could play those battles of the Peninsula and have 3 miles of battlefield scaled down - enough to satisfy the meglomaniac in me who wants to use whole armies and see how whole battles unfolded. 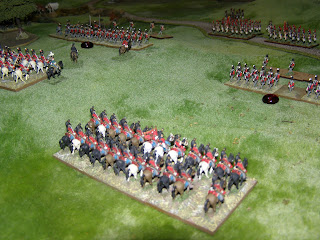 So I decide that those old 15mm Minifigs had to go on Ebay.  I got them out and started to price them up.  As I lined them up they started to form units and formations and by the time I finished calculating I realised that I had the makings of a very playable army indeed!  By some reorganising I could make double the number of units that I had and easily put on 4 brigades a side (give or take a few missing command stands as will be seen on some photos). 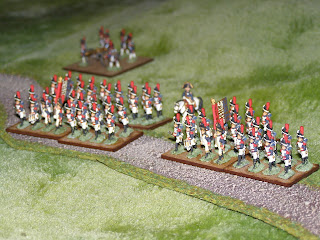 So here we are...my 15mm army is now seeing action for the first time in its existence since being painted up nearly 30 years ago by Ian.  I have rebased them in the last few weeks (work in progress!) and new flags will follow.  I am a bit of a figure snob in 28mm and really like the best figures but in 15mm these figures are not covered in excessive sculpting detail and in fact, in close order, they look really very nice indeed. Minifigs may not be fashionable anymore but en-masse these look great on the table...and their range is huge! 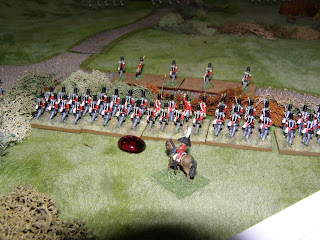 So the gaps will be filled in...other units will join them and whole scenarios will be played out - not whole battles but the major actions - the attack of the Imperial Guard, The battle for Placenoit etc and these old figures will take their place with their newer colleagues. 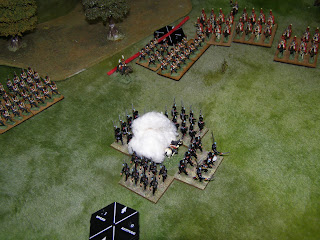 I used Black Powder and their Napoleonic supplements for this first game - all heavily modified by our own in-house amendments and what a game it was.  My British left flank was rolled up as my cavalry and then my Brunswickers started to break.  It was an outstanding game.  It has taken 30 years to get them on the table but there will be a lot more hot work for them ahead and soon! 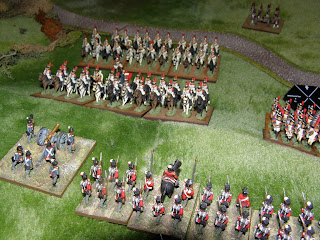 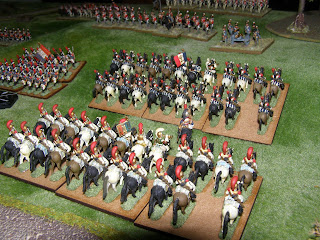 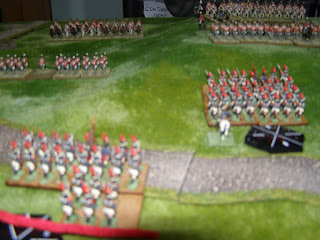 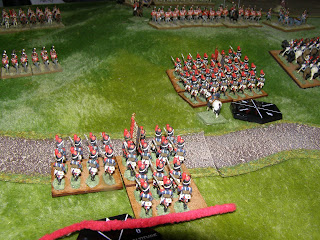 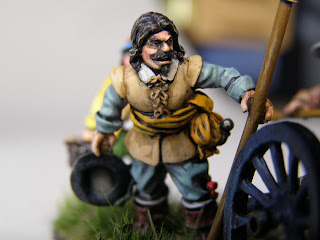 Progress has been immensely pleasing in the last month or so with completed units and models joining their comrades at a great pace.  It is often the inspiration from finishing a unit which acts as the spur to get the next batch of unpainted lead moving through the painting desk. 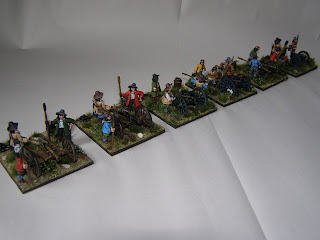 I have completed these guns and crews in just two weeks.  This is incredibly fast for me.  I painted and based 3 models in about 5 days and then 2 more models in another 5 days.  It was nice to get models out which I had undercoated a few years ago and put aside and finally get some paint on them! 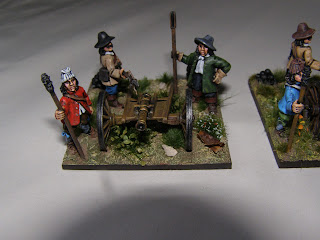 These models are from Bicorne miniatures and are mixture of 'Galloper' guns and Falconets.  Actually two of the Galloper guns are very old Minifigs pieces which I had retired.  They had been painted in a gaudy red and looked dreadful.  However I noticed that size-wise they fitted very well with the Bicorne models, so I would see how a darker hue would look. 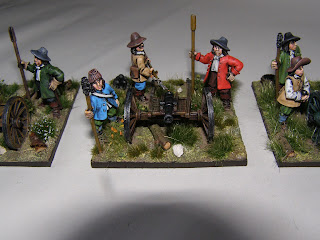 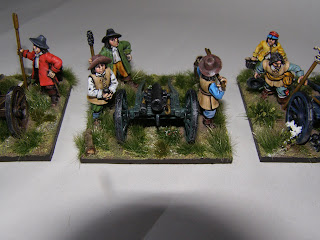 The two central models in the pics above and below are the Minifigs Galloper guns, suitably worn from travelling on poor English roads.  I'm really pleased how they have turned out. Now manned by an able Bicorne crew they are worthy of taking their places in the gun lines (or in hedgerows, placed by Sir William Waller, ready to ambush the Royalist vanguards in the lanes of the West Country!). 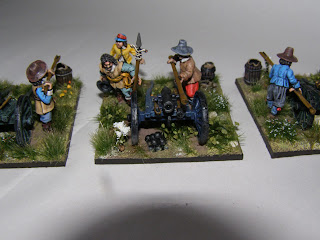 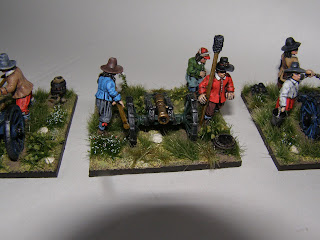 Paints were a combination of Foundry Triads, Vallejo, Miniature Paints, and even Flames of War.  I am using Foundry Paints probably for 75% of my painting these days. 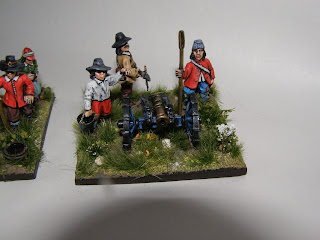 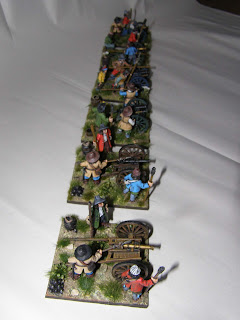 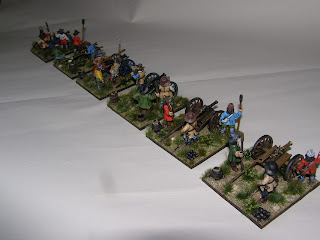 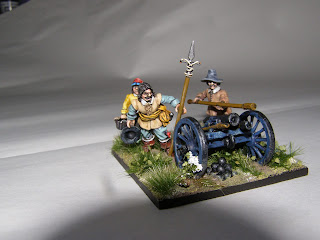 There are some real characters amongst the gun crews but I think the Parliamentarian officer above is one of my favourites. 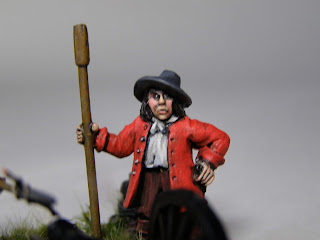 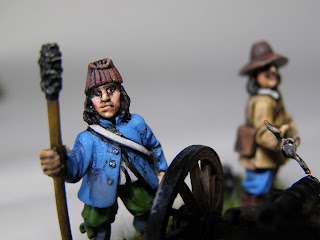 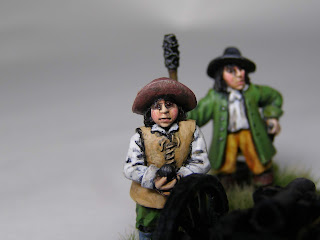 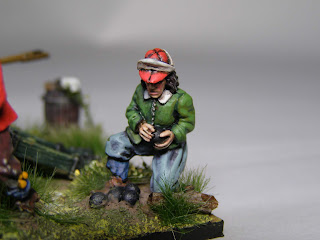 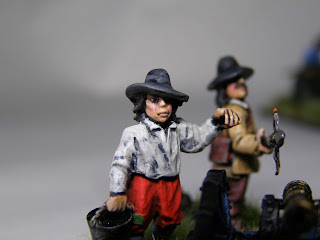 I have just received a much needed set of reinforcements for Waller's army which are just waiting for some paint to go on.  I have been side-tracked by an unexpected project though.  More to follow!
Posted by Jason at 17:36 17 comments: