After Action Report - A Romans and Britons Encounter Battle 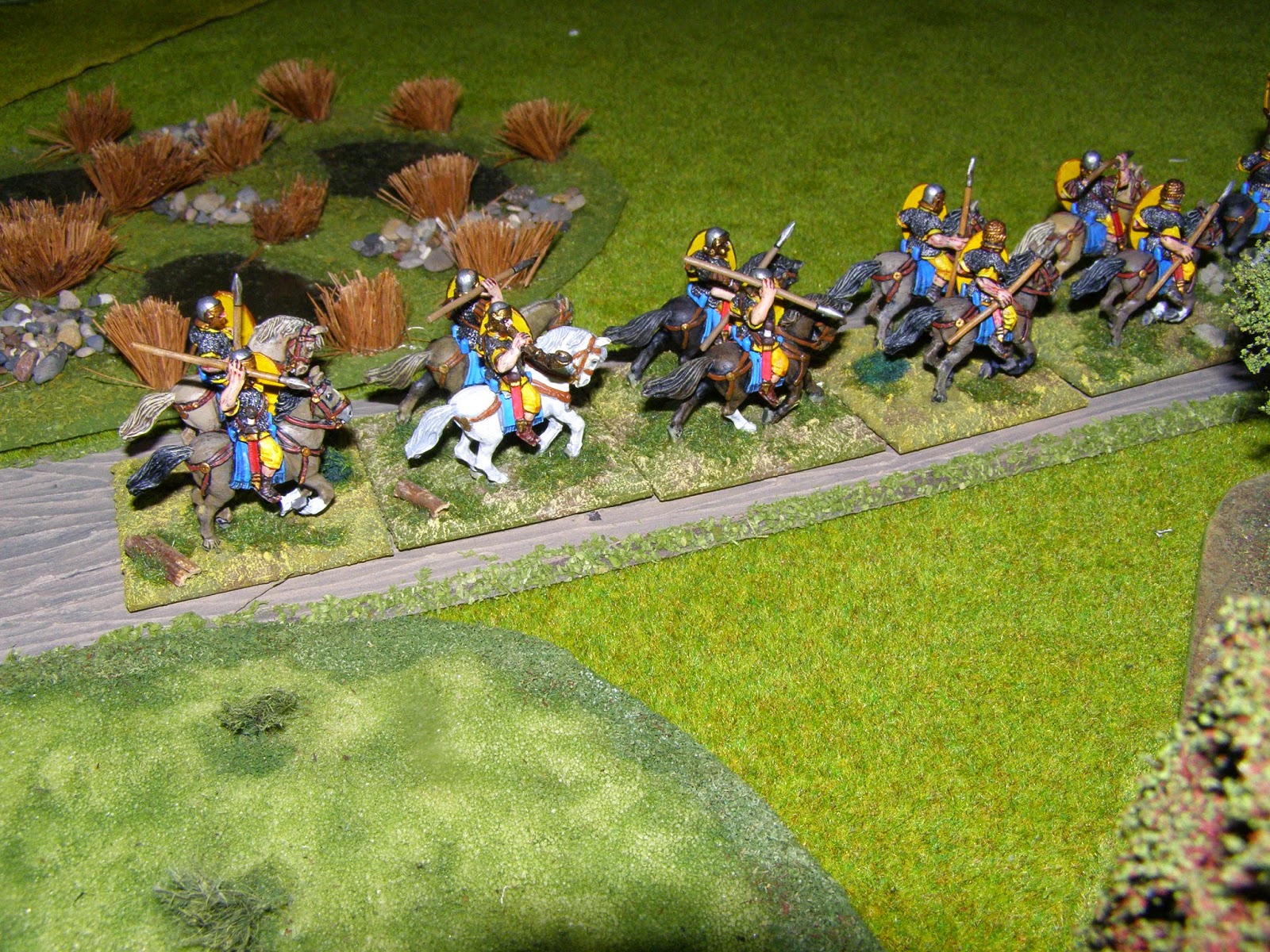 The figures came out again for another ancients battle at the weekend.  Unusually we have stuck with the same period of history for a 5th month in a row!  Both Ian, my regular opponent, and I are reading the same historical books at the same time.  The Penguin classics of 'The Gallic Wars' and 'The Civil Wars' have proved very inspirational.  The Caesarian Armies are still coming along and nearing completion so the Imperial Romans came out again - and that's no bad thing either!

We decided to go for an encounter battle.  The objective being the destruction of the opposing enemy army.  The key features of the battlefield gravitated towards the centre which encouraged swift movement (always helpful when time is limited!). 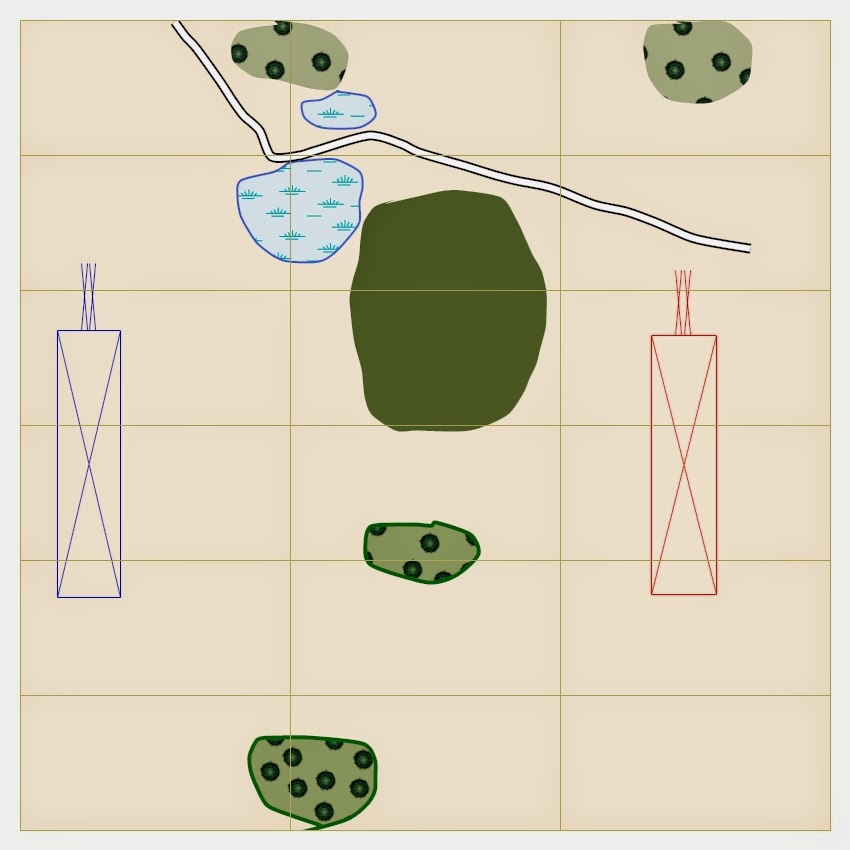 I'm using a mapping software programme for this map - I'm pleased to have discovered how to save it to my pictures file (note to self - select 'export' to blog pictures file and save as JPEG!). However, I cannot fathom out how to label the map yet with this software so I shall save that treat for another time.

The large green blob is the key feature - a large hill.  There is a road running from East to North bypassing the hill and between two areas of marshland.  Woods are dotted about.

It will suffice to say that the British Tribes are situated to the West (Blue) and the Romans are to the East (Red).  Infantry Divisional symbols are shown but the armies broke down into 3 x brigades each side (forming the division).  Cavalry, Chariots and Scorpions also added to the discomfort of the foot-sloggers.

Ian and I both diced for command ratings.  Ian's Roman General was an excellent 9 with both Brigade Commanders a sound 8.

We diced to see who went first and the Romans won 6-1.  My dice seemed to have been cursed by the Roman priests! 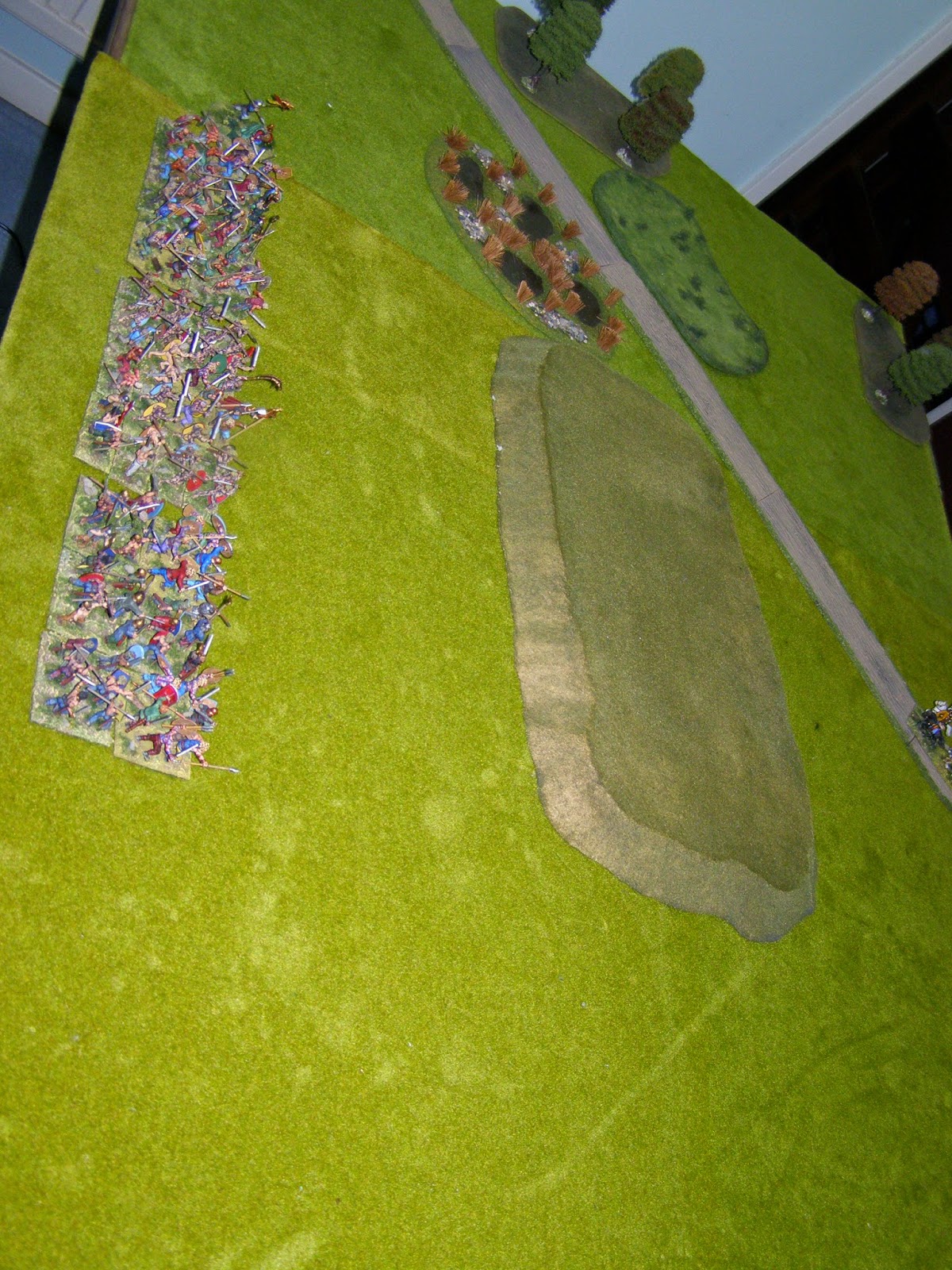 This photo can hopefully be orientated to the map.  Note the hill, road and marshes to the North.  My Britons have deployed to the west. 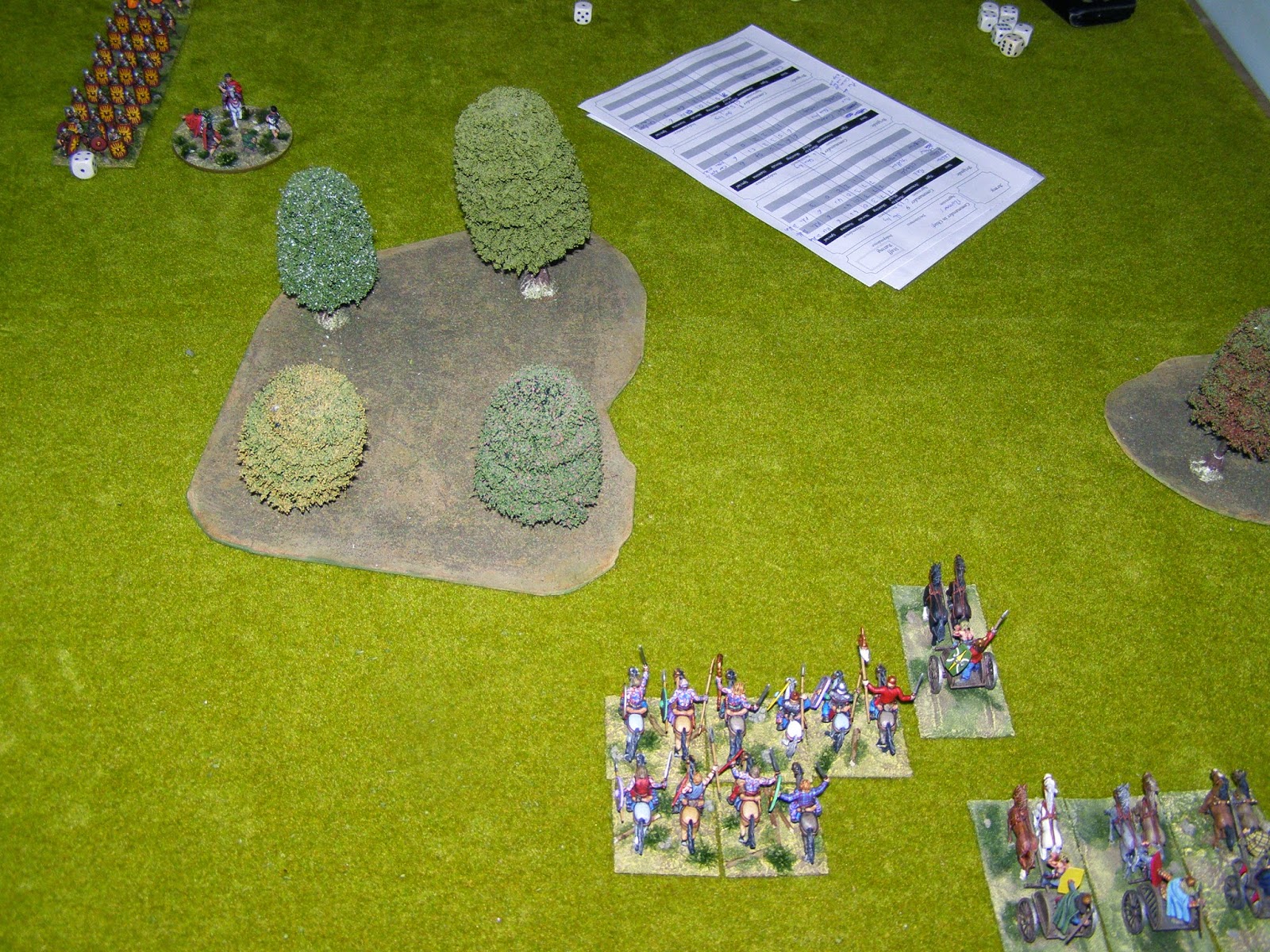 We used Hail Caesar rules for this game.  I have plans to use 'To the Strongest' for my current painting project (10mm Caesarians) (one Legion nearly painted already- hurrah!)

Game Turn One saw the Romans make a general advance.  The Britons started to suffer straight away from their poor command ratings and my orders didn't reach any of my troops - so no movement for me!

Game Turn Two saw the Romans advancing all across the board.  This was looking bad for me already! I managed to deploy my chariots and cavalry on my right wing.  I saw Ian deploying his cavalry down the road at the North of the board but I didn't want to be distracted by them.  My mobile brigade deployed at the southern end and aimed for the Roman Auxiliary Brigade.  I needed to hit his lighter units before his Legionaries deploying in the centre did the real damage. 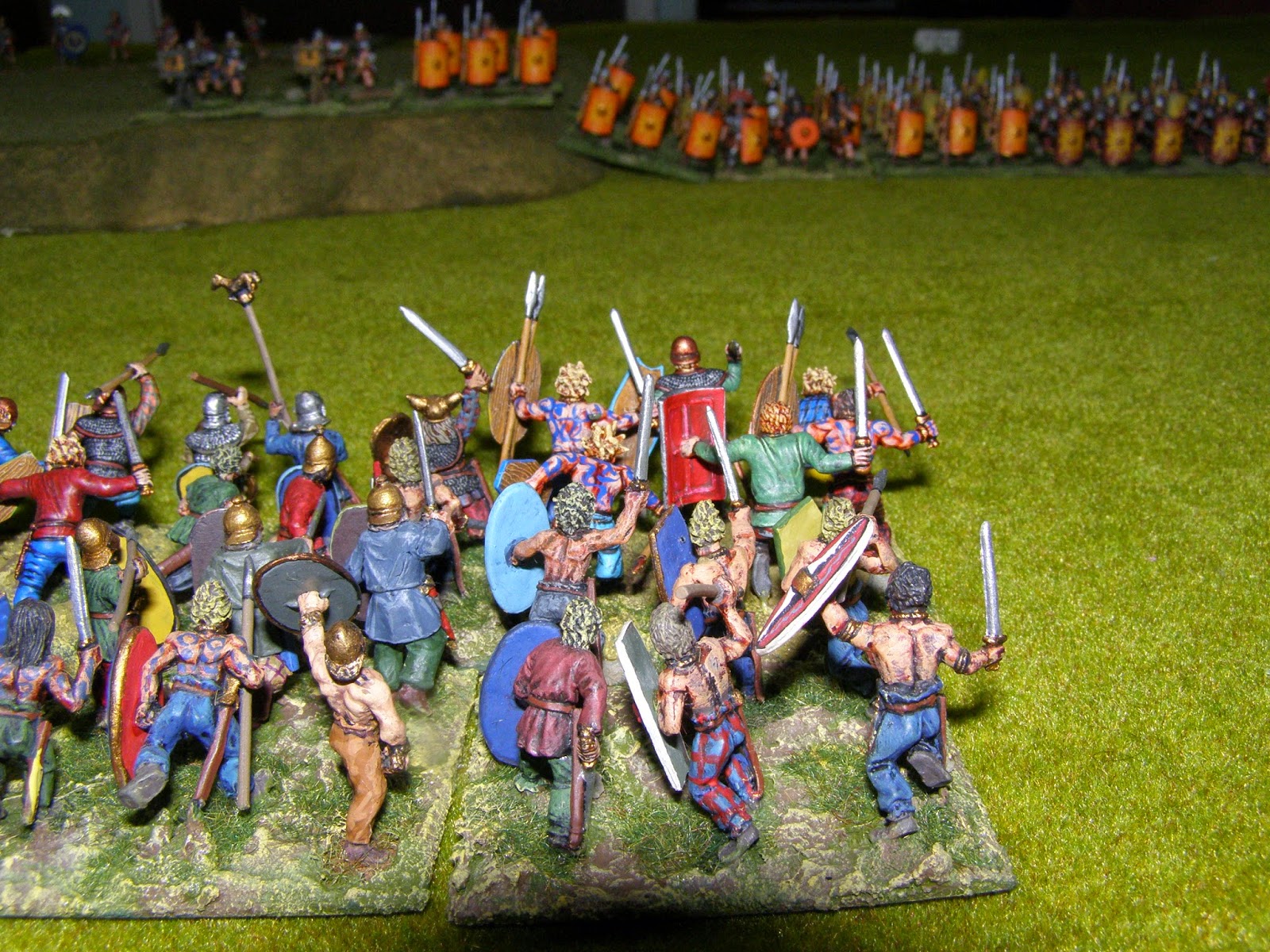 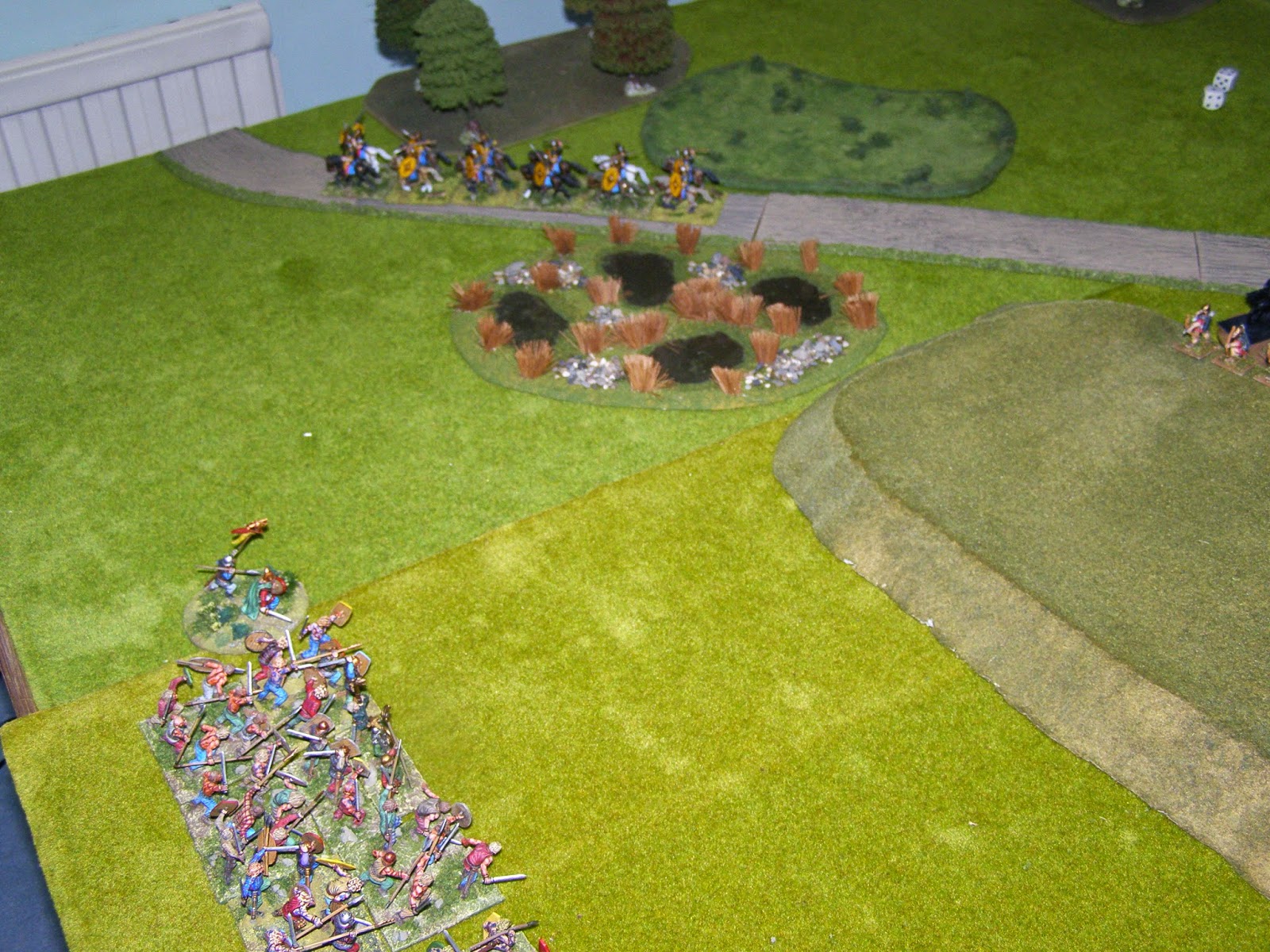 Game Turn Three saw the Romans drawing ever closer and I was only just getting on to the board with my tribal infantry. You can see Ian's cavalry taking a wide sweep to the North on the road.  I really want to take that hill and not be diverted by cavalry from my objective.  Ian was deploying skirmishing archers and Scorpions onto the hill on this game turn.  Even the Legion had secured the southern end of the hill - a worrying development.  My tribesmen had ignored their orders for too long and it looked like I was going to get boxed in. 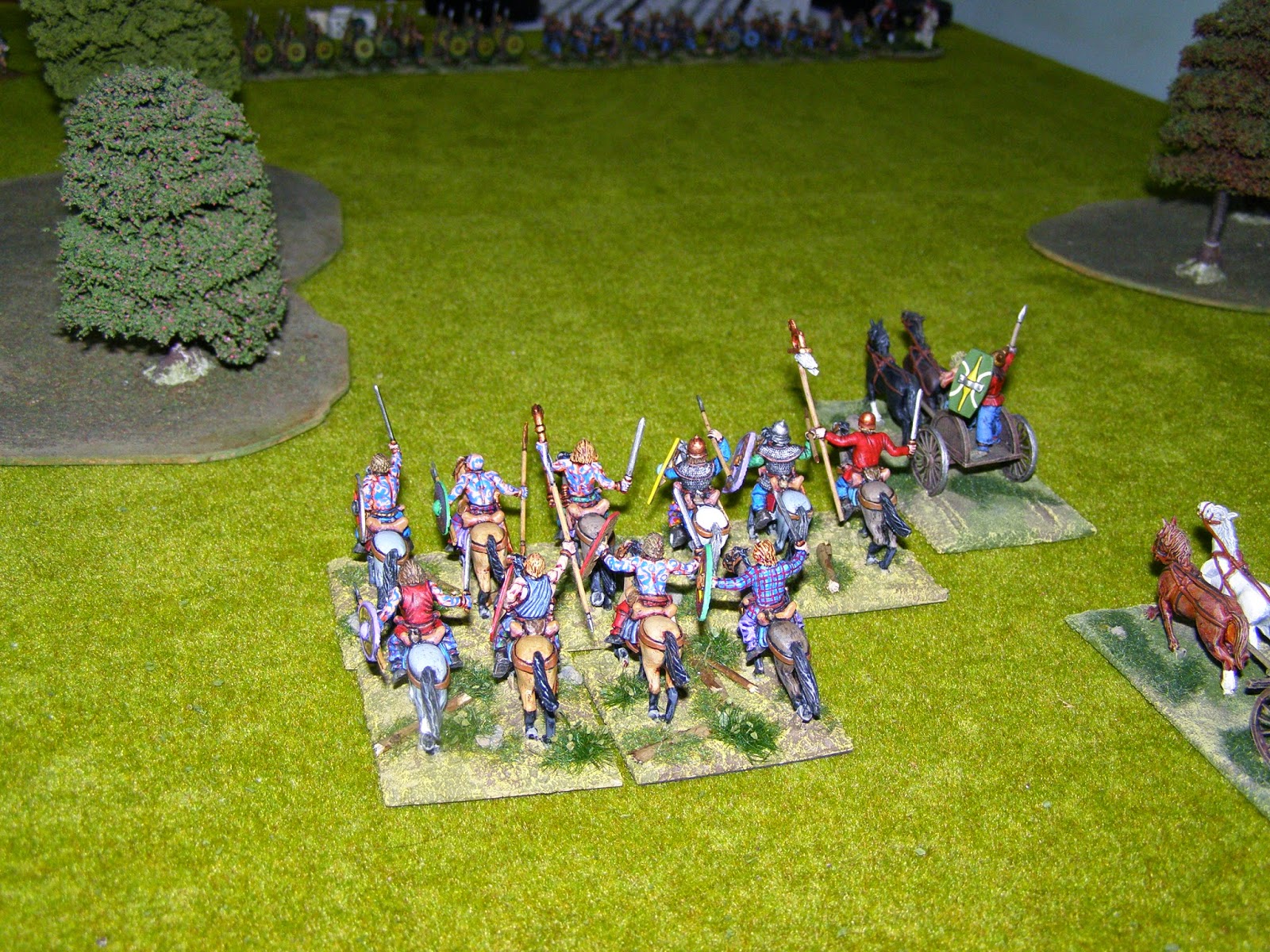 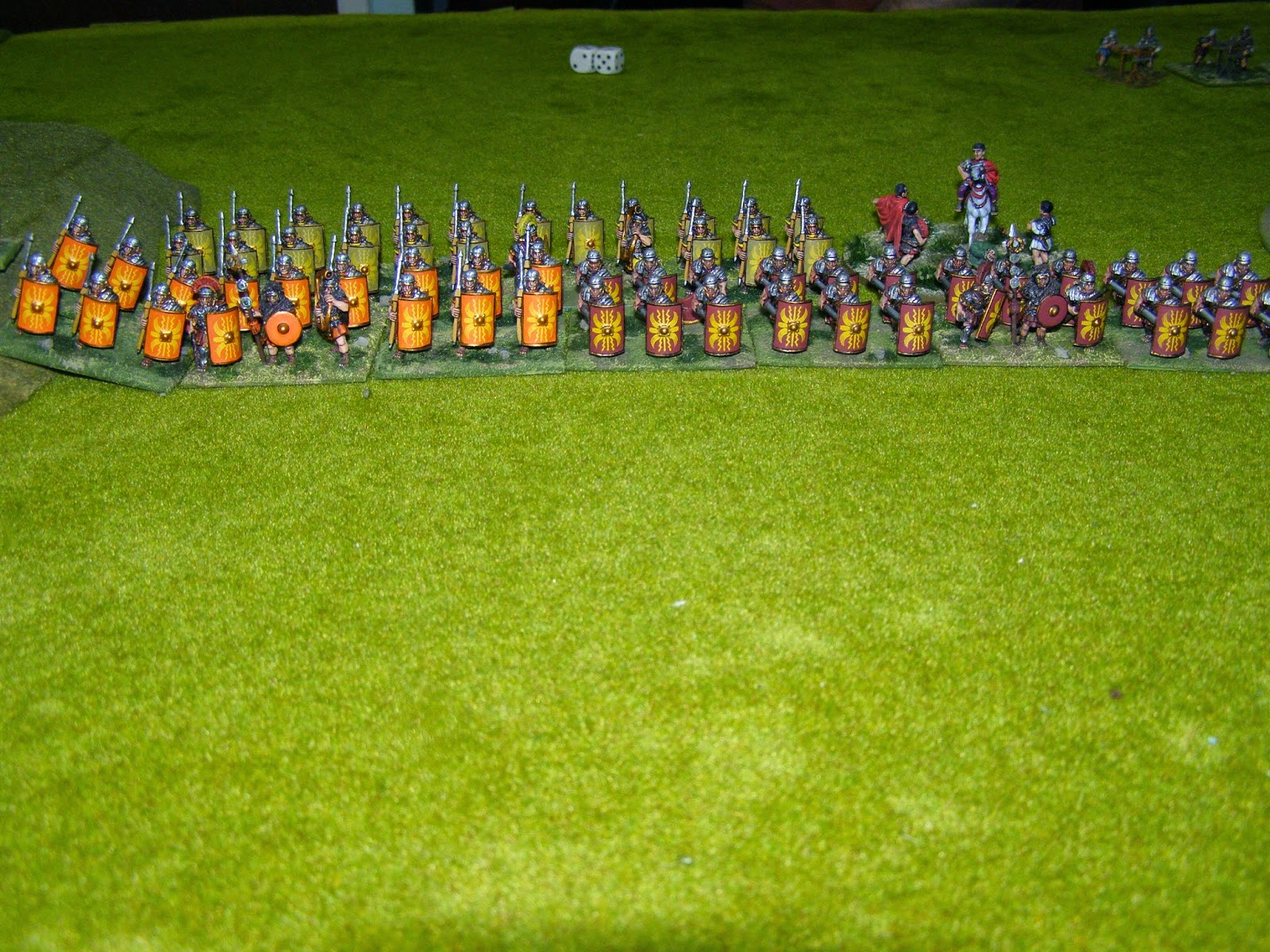 Drawing in towards my centre. A solid mass of Legionaries 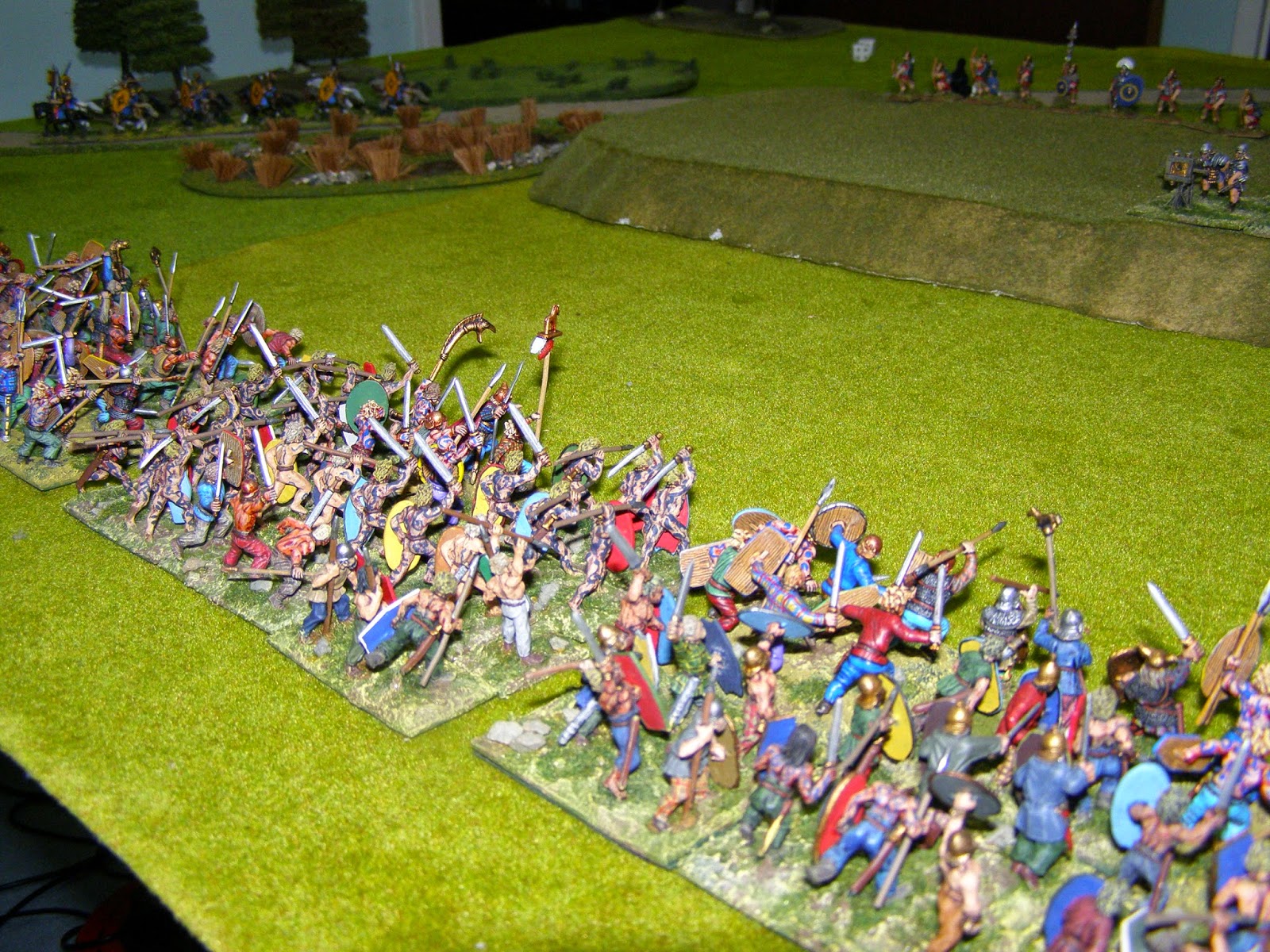 My British tribesmen.  Looking scary but refusing orders to advance! 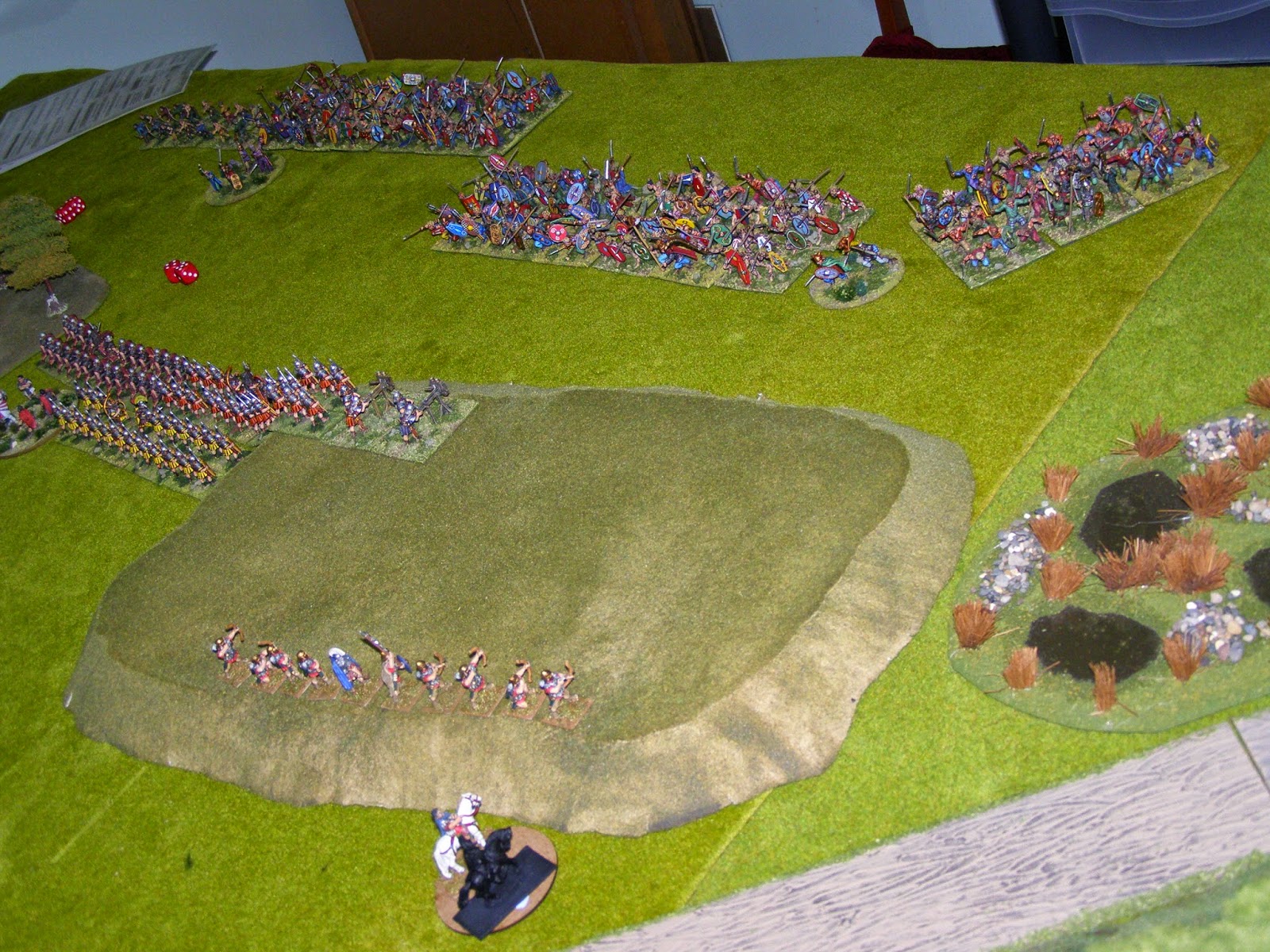 A view from behind the Roman lines - note one of the British tribes angled against the threat of the cavalry.  Please ignore the undercoated in black Roman General.  We needed another commander and this one is still not finished! 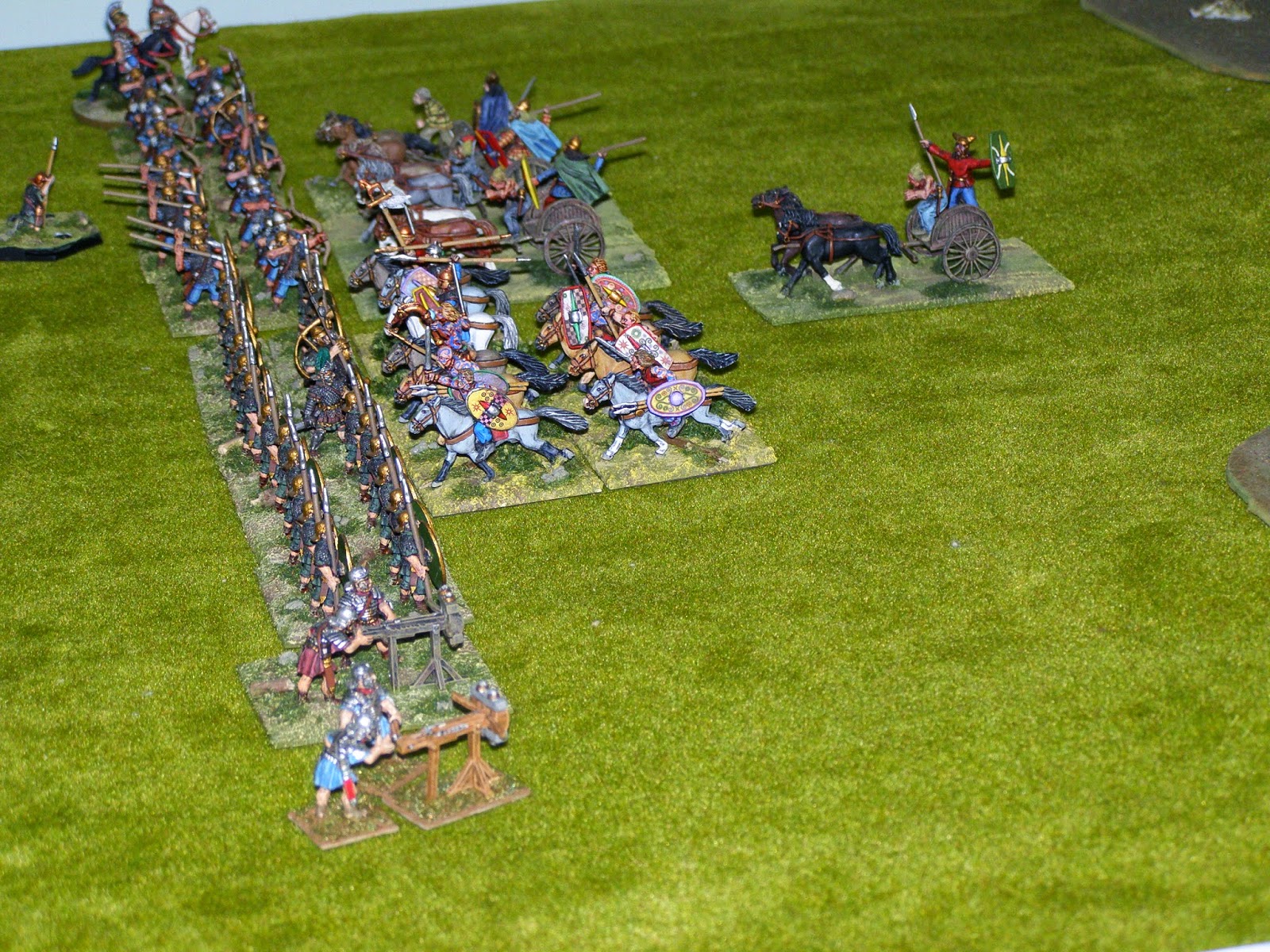 At least something's moving for the Britons!  A triple move charge crashes into the Auxiliaries

The British cavalry push back the opposing Auxiliary unit and follows-up!  First melee success to the Britons!  After the initial inactivity from poor command rolls this was an unexpected success!

Game Turn Four saw the Romans mostly static put putting pila and scorpion bolts down range.  The British cavalry force beat back the Roman Auxiliaries again, who go off the table and are thus broken as a unit.  Things are looking up! 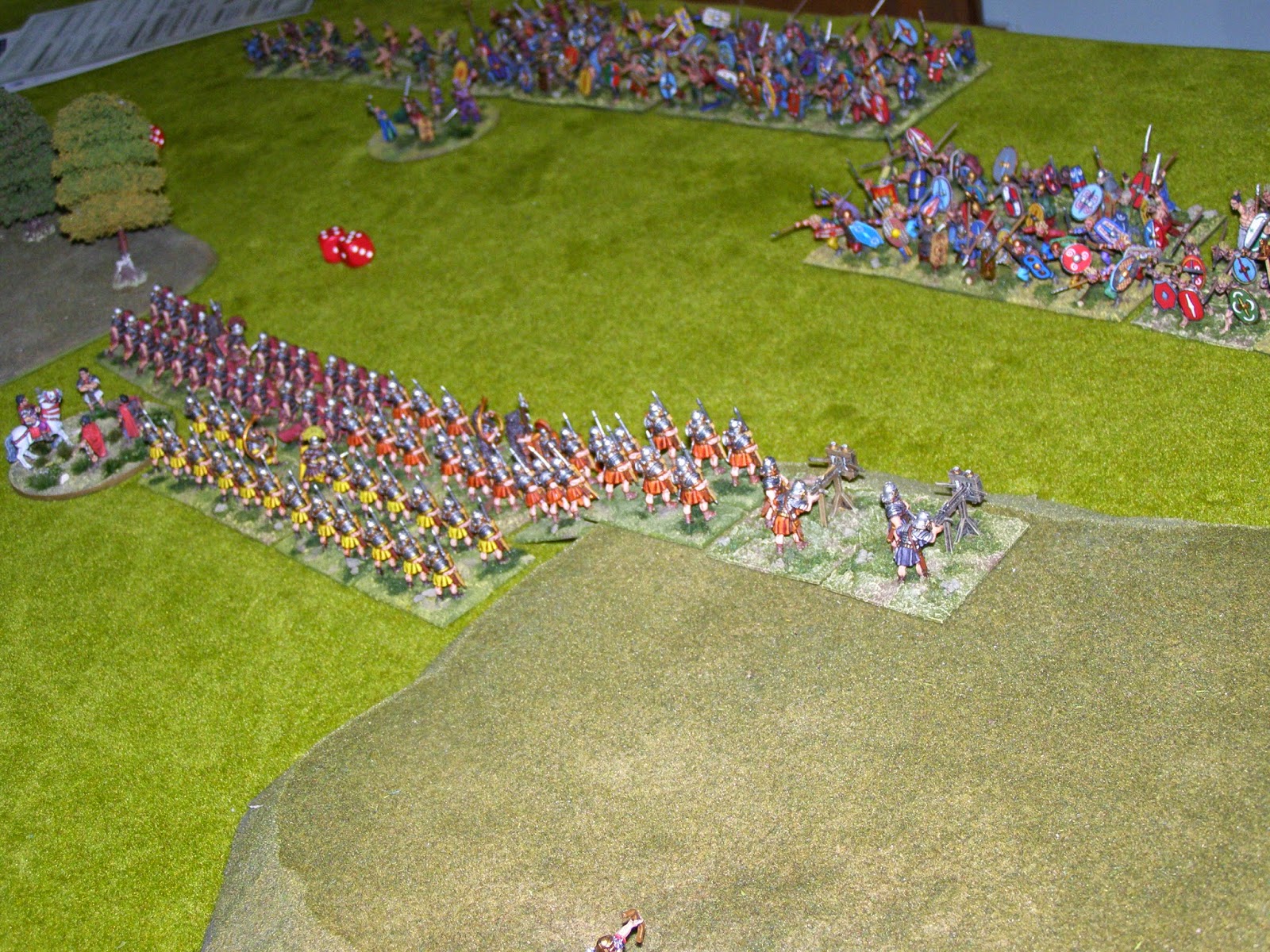 The Legion are content to halt and block my tribesmen in. The reason for this holding action becomes clear soon enough! 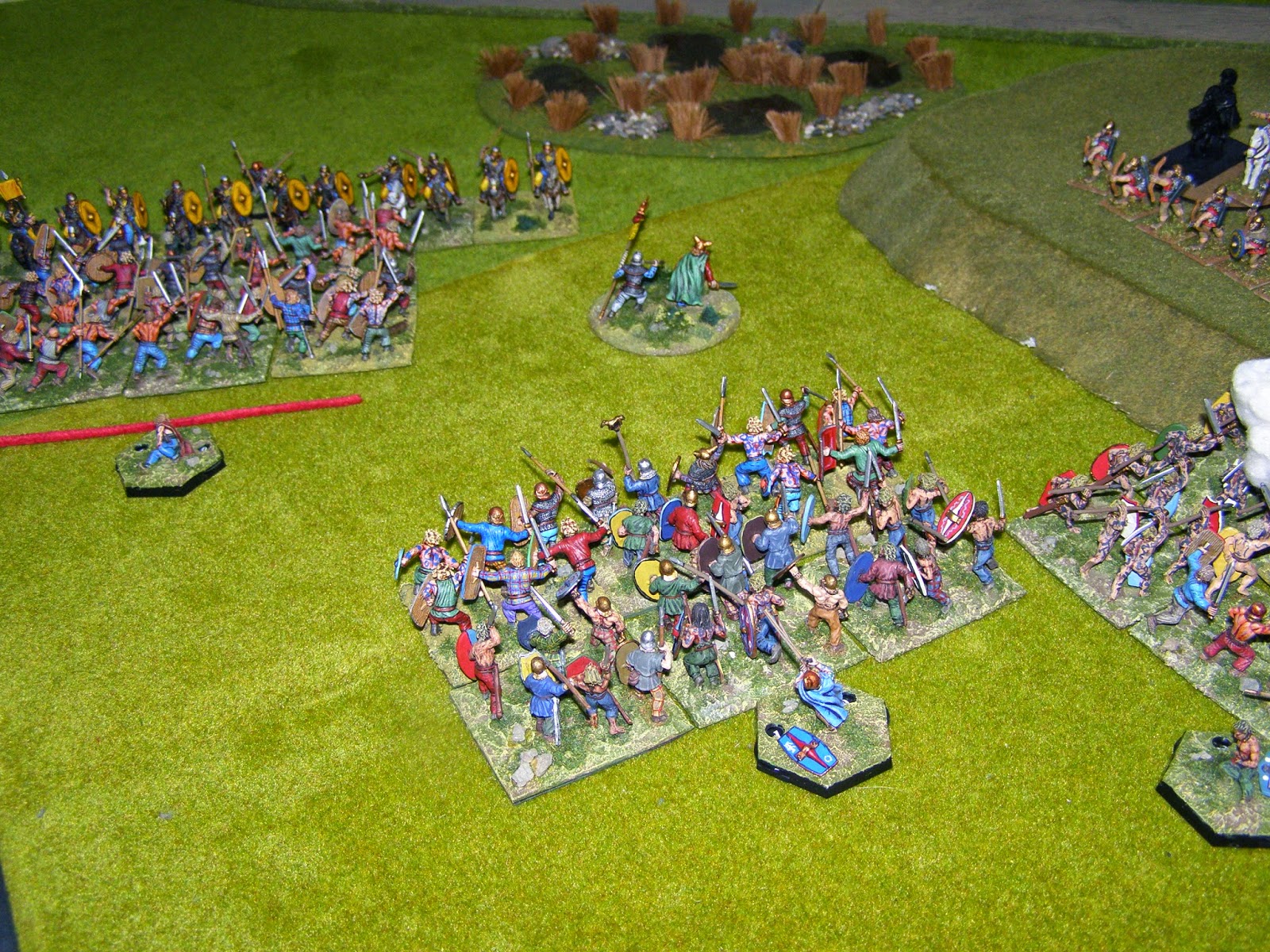 The Auxiliary cavalry gain a triple move and form into battle line and charge my flank. I have little choice but divert troops from my centre to shore up this flank or my tribesmen will be surrounded 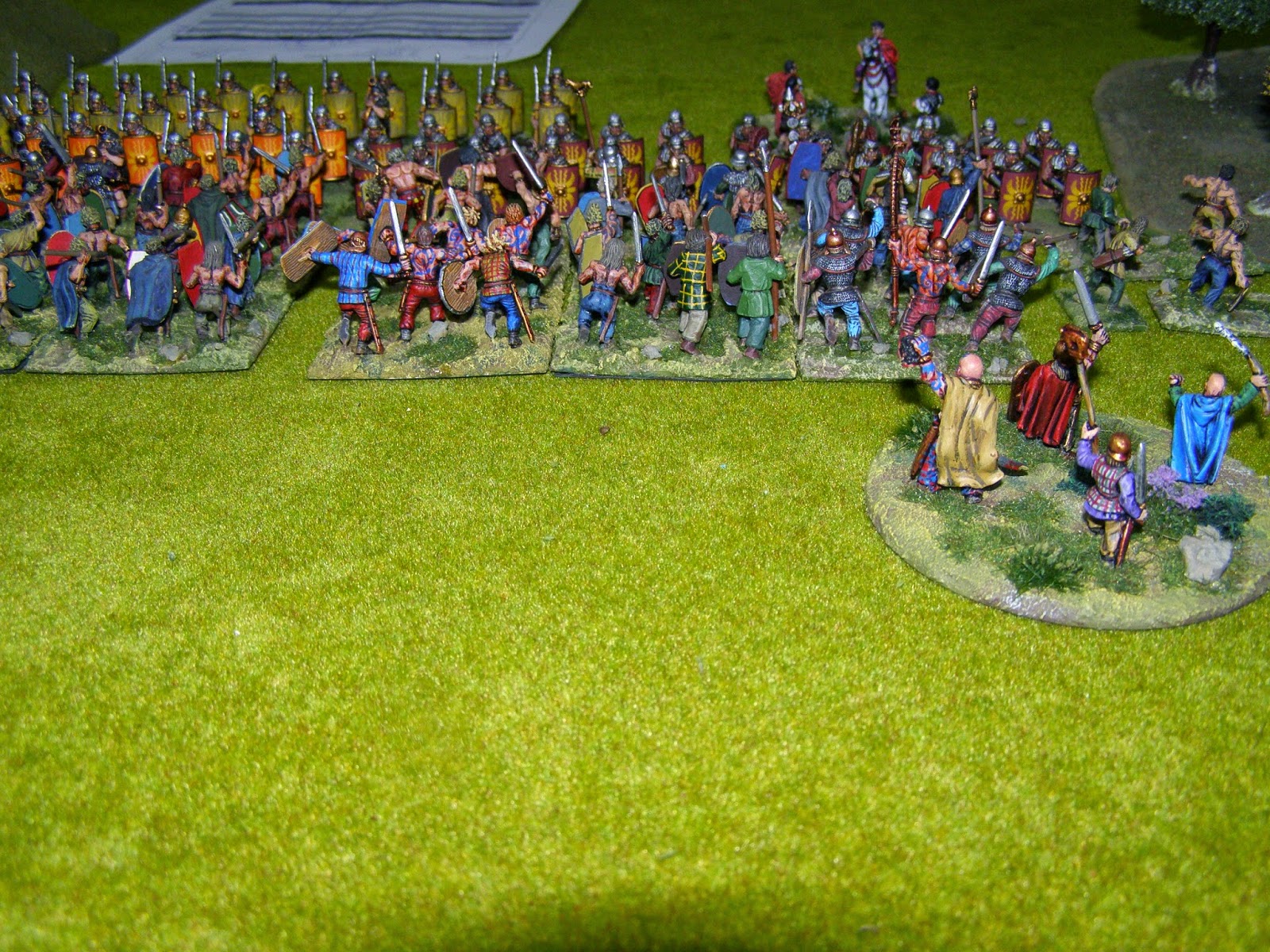 Game Turn Six sees the Roman Legion spot the crucial moment of the battle.  Both of the Britons flanks are under pressure and the centre has to be weakened to fight on the flanks.  The Legion charge! 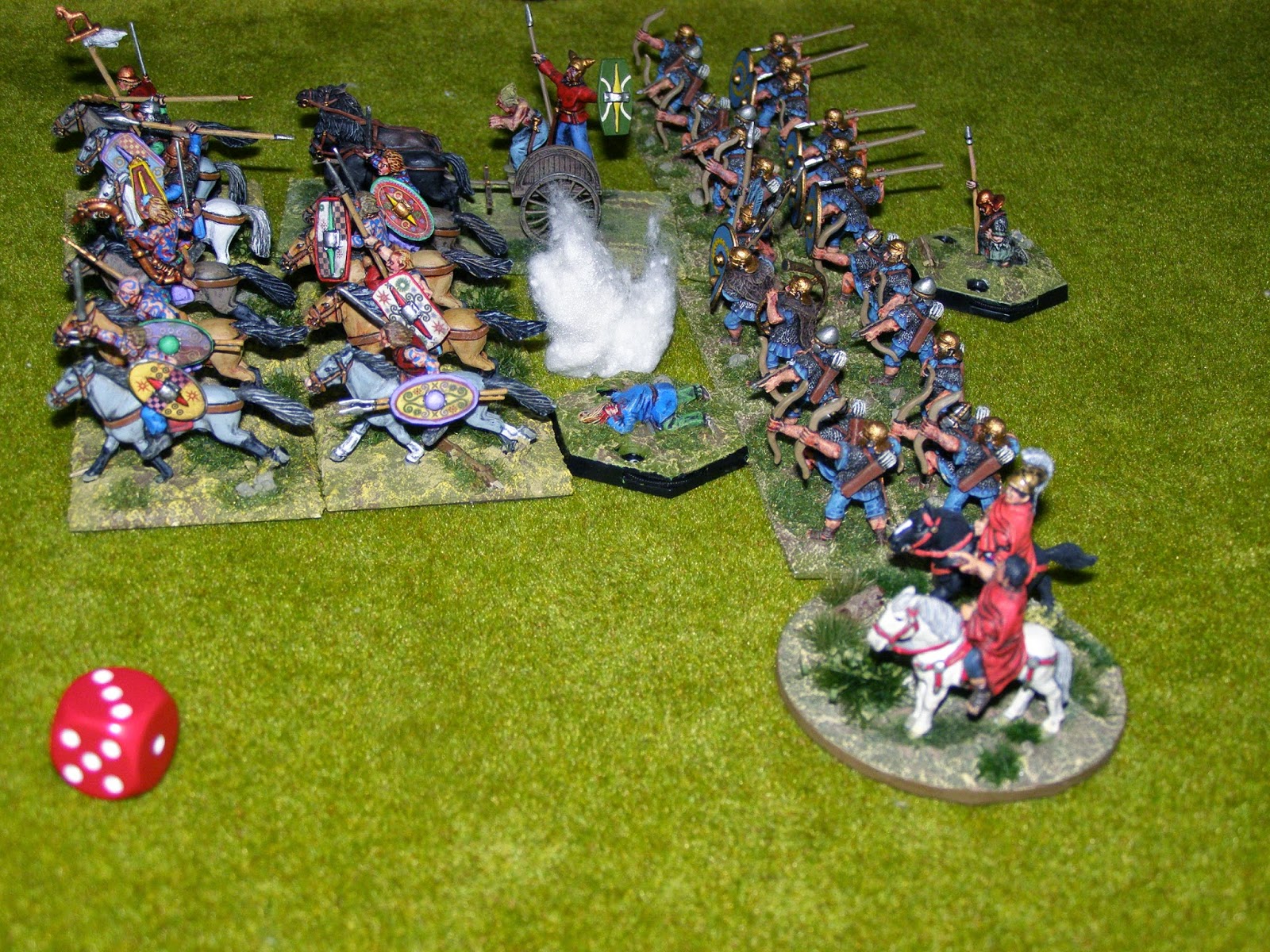 This is where things went wrong on the British right (the south on the map).  The chariots were beaten off in melee and this was followed by the cavalry being made to retreat disorganised (ubiquitous cotton wool) as they were charged in their rear and unable to turn to meet the threat.  The retreat move could not be completed because their was a battery of scorpions I had been hoping to charge to kill easily.  Alas as the retreat was blocked by them, my unit disintegrated. So the fortunes of war changed so rapidly. 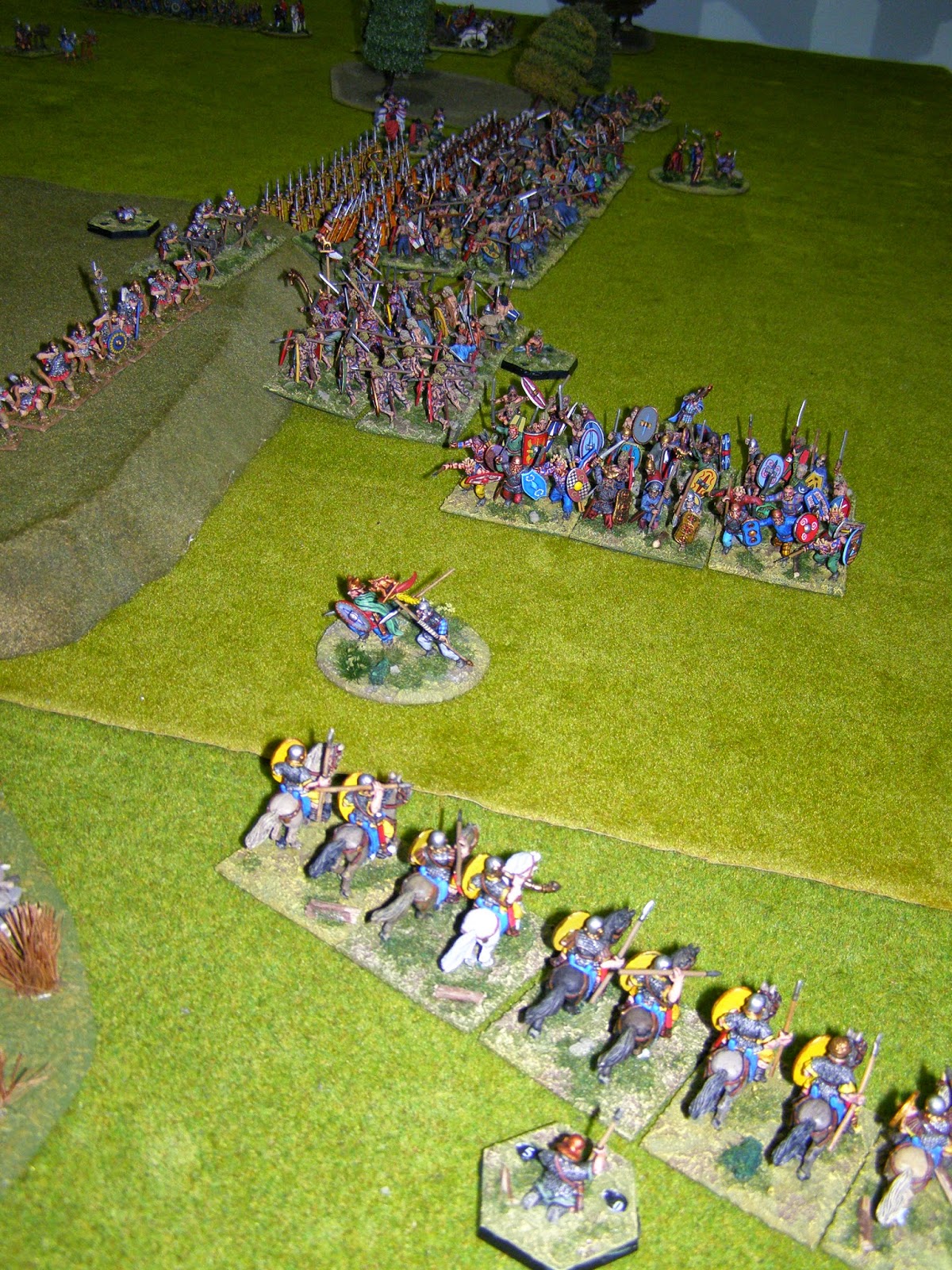 The victorious Roman cavalry prepare to charge another unit 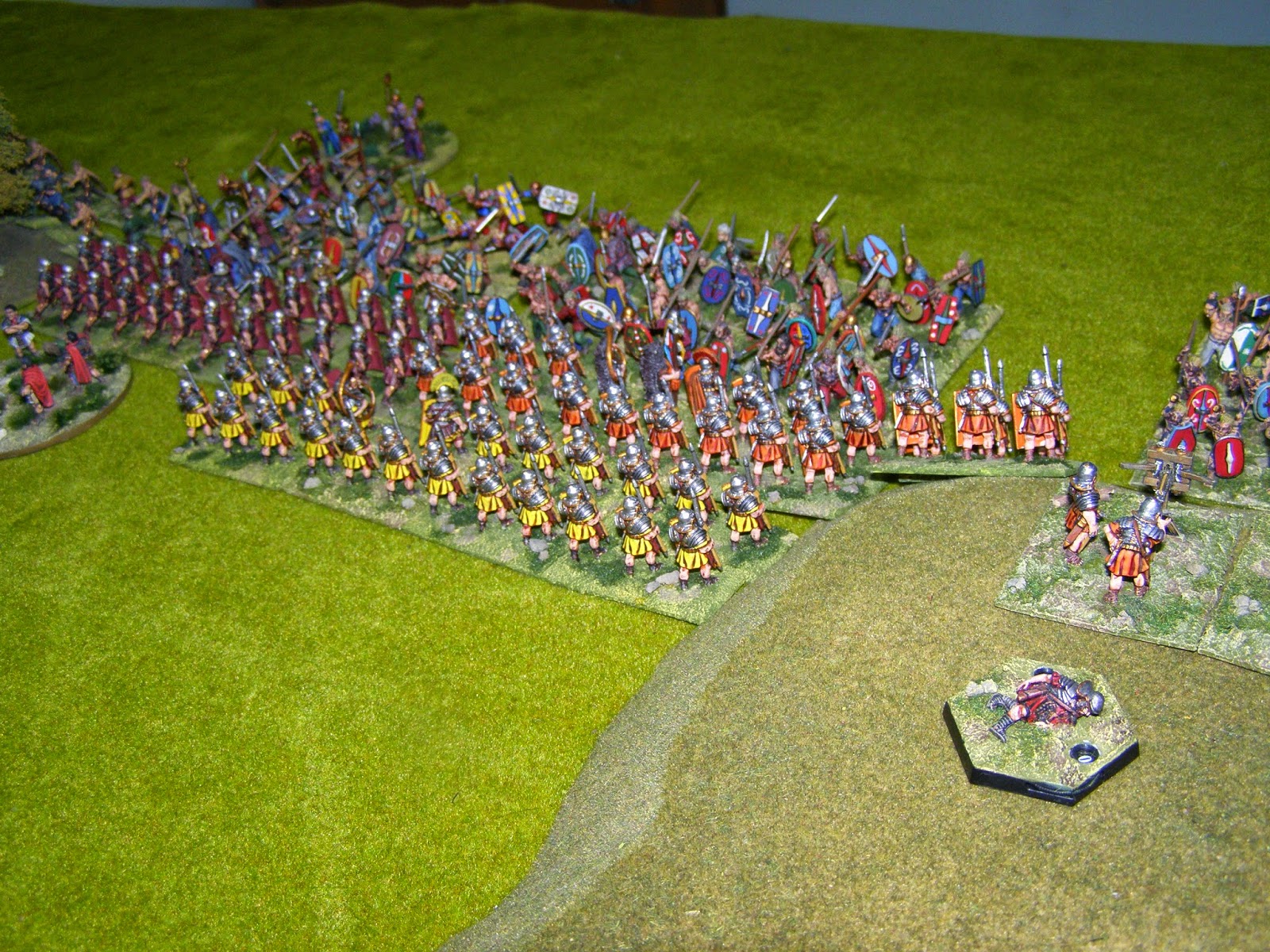 Another view of the action in the centre 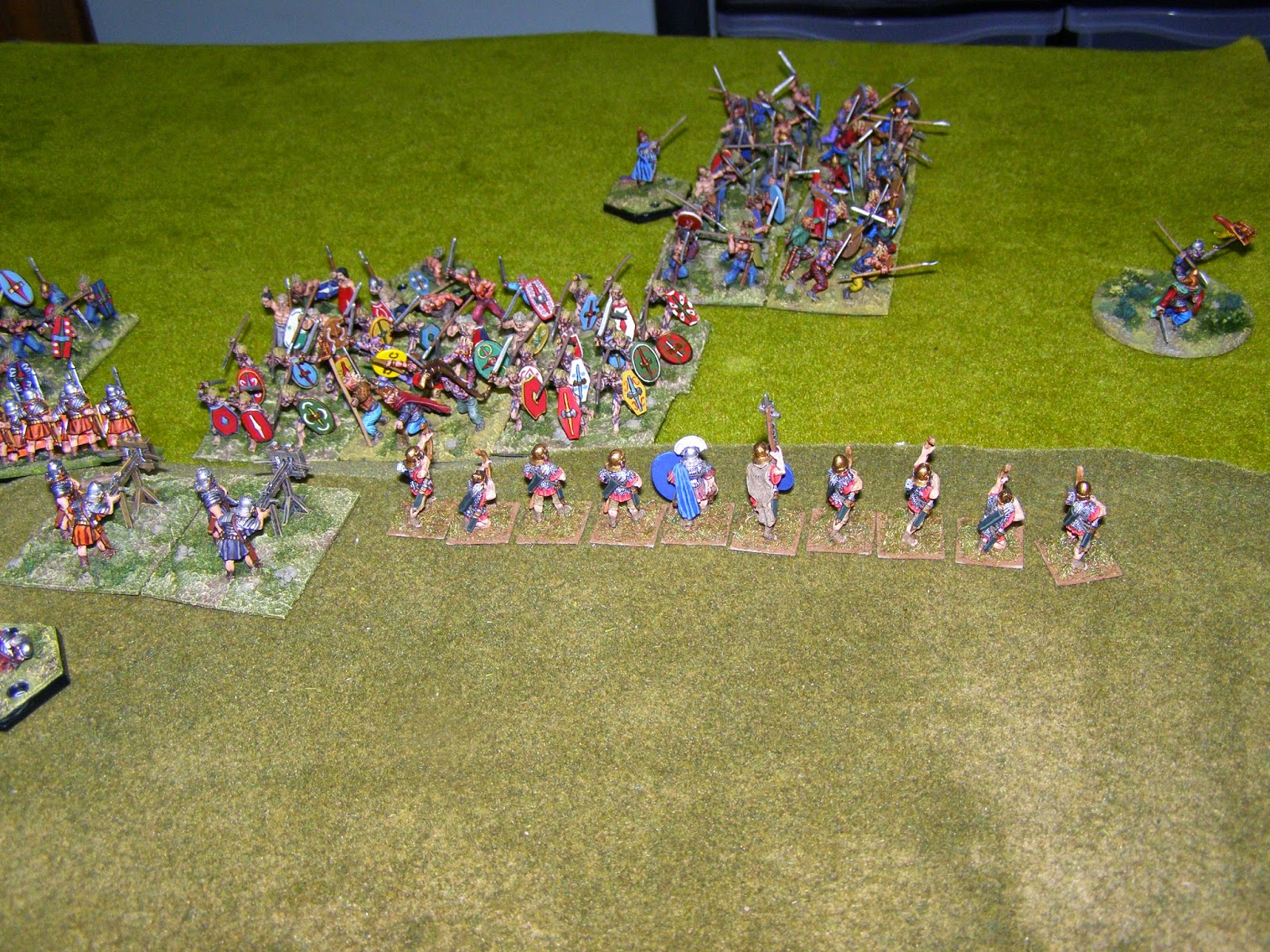 I couldn't get the tribesmen to charge up the hill due to poor dice rolls and disorganising fire.  The Romans did a great job of pinning the troops down while I had to pull back supporting units to prepare to receive cavalry from the flank 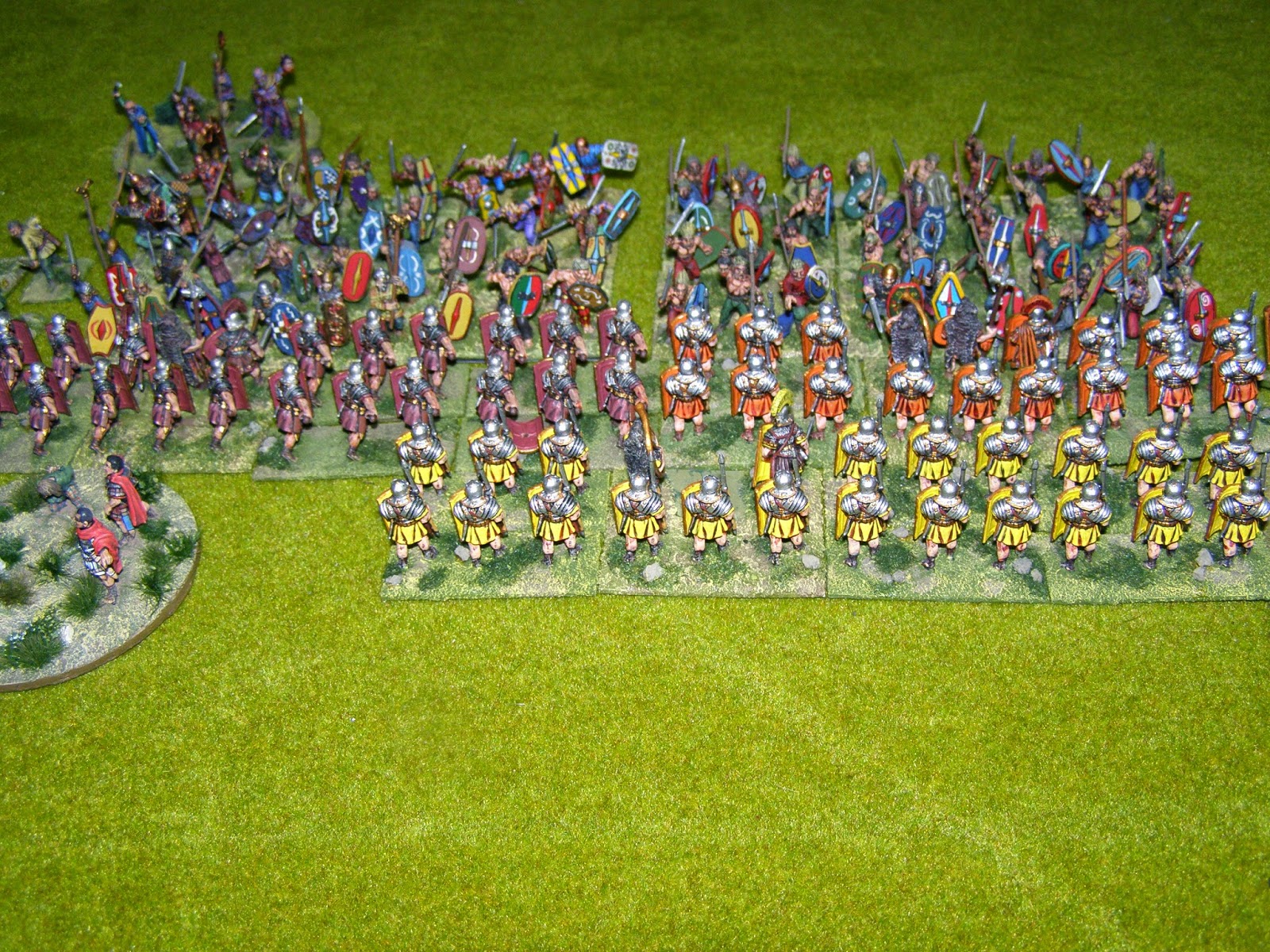 Two tribes take on three legionary cohorts - the end is nigh!

At this point I conceded the game.  Both flanks had caved in and the Legion had bided their time, squeezing in the centre until they finally added their weight. As I weakened my centre to push out to protect the flanks the charge was always going to succeed.  I could see the situation developing but there was little I could do to change anything.  The end was inevitable.  Ian had fought a textbook action and the victory for his Roman's was total!

All in all a very enjoyable game.  This was especially pleasing as the previous two games had thrown up quirks.  I haven't written those games up but the improvements have been implemented into my copy of the rules.

One of those games did involve a river crossing where neither of us could get our troops to find the fords in the river by pulling out a sequence of just two playing cards (one beating the other).  In the end our troops just stood on their respective banks and hurled stuff at each other as they just could not cross.  Amusing but not the best outcome for an ancients game.  This was just really really unlucky and not a reflection on the rules.

The other odd game threw up a rules quirk.  When shooting at an enemy in Hail Caesar, 6's on a D6's cause a throw to be taken on a Break Test chart.  This threw up an extreme case where a fresh fanatic warband was stopped in its tracks by a tiny skirmish unit of archers who made them retreat (without inflicting a single casualty!).  This seemed to both of us to be very unsatisfactory and I searched on the internet to see if anyone else had modified the rule on this.  I was very happy indeed to find this:

Bill's solution is absolutely perfect! I use this table now instead.  Disorder is caused by 6's on D6s (like Black Powder) but break tests are now only thrown if the hit unit is already wobbly with shaken morale when it is shot up. What a great solution and it played really well too! The only difference to this sheet we have made is that we do count the difference in casualties between the two sides in melee as deductions from the break test throw of 2D6.

This will be the last game until April and I will still be happy to get the Roman's out again next time as they always look great on the table. Maybe the Caesarians will be ready...!