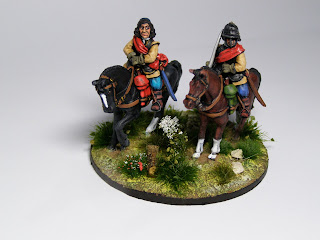 Well, it's nice to do another blog post! Much has been going on since the last post but I have managed to get quite a bit of painting done of late too.   My games of Pike and Shotte have shown me how desperately short of command stands both my Royalist and Parliamentarian armies are.

As much as I prefer to spend time painting infantry and cavalry instead of commanders (because of some sort of feeling of obligation to doing my very best efforts to the great and bold), I felt I could put this off no longer.

Inevitably,once started, I really got into it and enjoyed putting the colours and detail on. 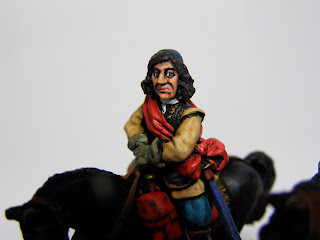 This is Sir Marmaduke Langdale along with one of his senior cavalry officers.  He was an important Royalist commander during the Civil Wars, and he famously led the particularly rough and mutinous 'Northern Horse'.  More information is available at this particularly good resource: 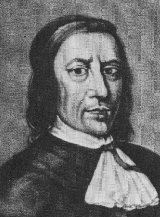 Interestingly Sir Marmaduke appeared to suffer an awful lot of defeats and one can only admire his doggedness and spirited refusal to give in. 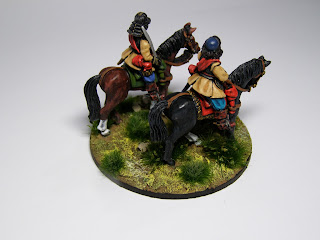 The portrait appears to show him wearing some kind of cap which seems to sit too far to the back of the head to be an armoured skull-cap, so I have made the assumption that it some sort of velvet cap, perhaps to add extra padding beneath his helmet, so have painted it as such. 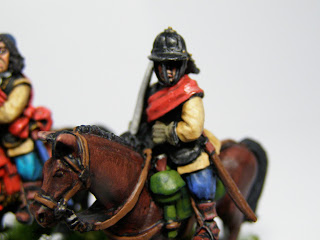 The figures are all produced by Bicorne Miniatures and have been painted with a mix of Vallejo's, Citadel and mostly Foundry colours.