A change of period!

Well, as I had been threatening to do for a while, I have changed historical periods.  I always go in circles like this. My circles normally last between 6 months to 2 years then I get into something else, depending on what inspires me, and then I return to it several years later. So having obtained my copy of 'Pike and Shotte' rules and being suitably inspired I decided to re-vamp my English Civil War armies.  Some of these figures I have had for over 20 years. The Minifigs troops I started with have been retired, as have my Hinchliffe and Old Glory figures.  This leaves Bicorne, Renegade, Redoubt, Foundry, a small smattering of Essex and a few 20 year old Front Rank figures. 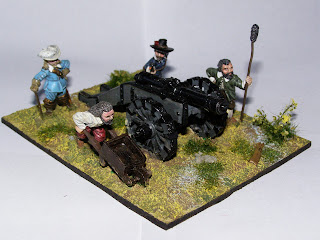 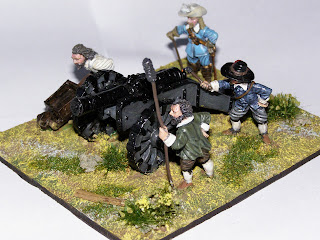 I think these are Front Rank

I started with 'Forlorn Hope' Rules which I used to read avidly in the 6th form centre at my school between lessons (so 24 years then!).  These rules I used until about 10 years ago, when I just despaired at the slowness of the games. It seemed to take 2 days to play an action that might have lasted 2 hours in reality! 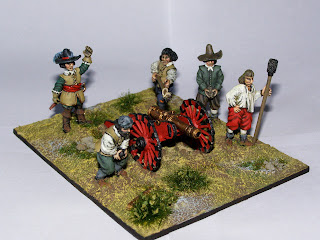 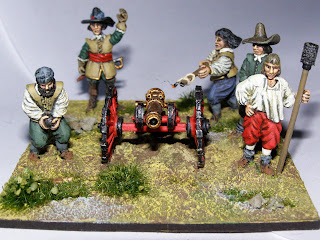 A nice Redoubt gun and crew

I tried Warhammer English Civil War, but despite the beautiful cover artwork and the glorious glossy pictures, I was unhappy with them.  The artillery is nuclear for a start!  I think I spent 4 years tinkering and re-writing them and then I played 'Hail Caesar' and thought...'Hmmmm I can picture this working with English Civil War' and then I heard that a set specifically for ECW was being brought out!  (Oh all my lucky '6's happening at once!). 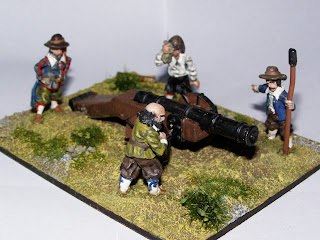 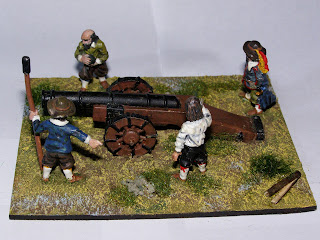 A hefty piece and crew by Essex

So I have started the big re-base.  I painted all the figures and guns here somewhere between 10 and 22 years ago.  All my artillery figures were based singly and the guns were separate and it was really a pain in the butt getting them out of the boxes and putting them away and moving them on the table.  I am so much happier with them based altogether as a crew with their guns.  I also decided to put a lot more effort into the basing.  Inspired mostly by my fellow bloggers and some of the amazing basing tips I have picked up, in all honesty (so thank you so much to you all for that).  The large bases I have used are MDF pre-cut as my plastic card goes too bendy and I seem to mess up cutting straight lines!  I have also started to paint the edges of the bases in a black/brown colour.  I always used to try to cover the edges in basing material to disguise the edges (see my celts etc in previous posts), but I noticed a trend in the hobby magazines of dark edges, and I think it looks quite nice in forming a frame for the piece displayed and putting the focus on the whole stand.  I'd be interested in your thoughts on this method. 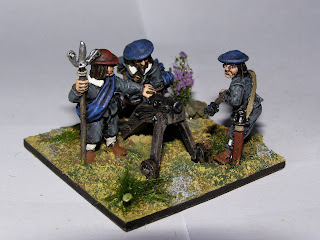 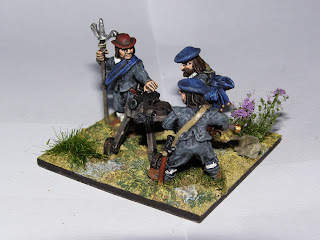 That's my artillery so far, though I have two Minifigs galloper guns to base yet if I can find some crew by another company to put with them. I want to get those complete for recreations of the Battle of Roundway Down (A place I visited on the way back from the Wargames show at Devizes this weekend just gone). 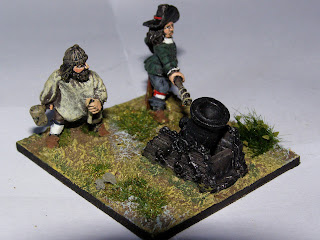 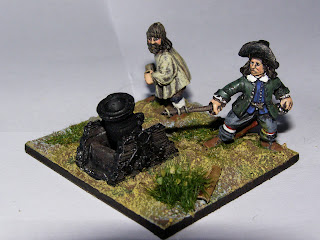 I've changed my photography technique too, using curved white paper as a background and using flash and no macro this time. I also found a handy setting called 'Cuisine' which I think is meant to allow you to photograph food in fine detail before you polish it off! (Thank goodness I don't eat much fast food!).  It seems to have avoided the yellowing I was suffering in my photos before, though that might have been caused by the flourescent bedroom light....more experimentation needed I think! 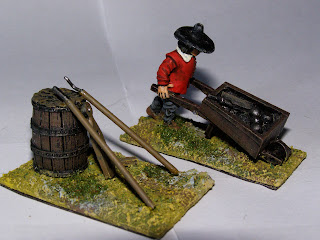 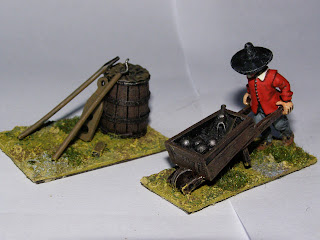 So this marks the start of the big re-vamping of a collection.  Infantry and cavalry will follow in due course. Of couse I should say 'should follow in due course'.  At the show at Devizes I bought some 28mm Ancient Greeks and 'Battlegroup Panzergrenadier' for WW2....This wargamer does give in to tempatation! :-)