I am pleased to introduce the Earl Cornwallis to you.  At long last I have finally painted up a British commander, plus two other senior officers, to take charge of my American War of Independence British Army. 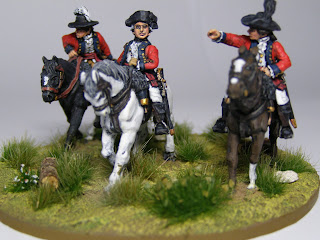 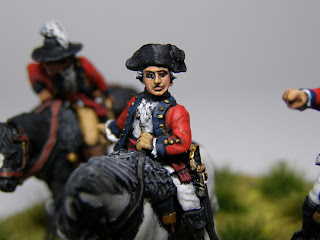 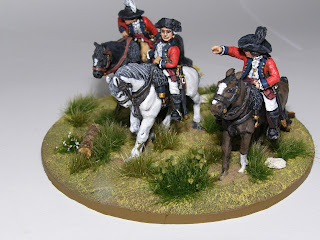 Thanks to the internet, there are some excellent portraits available to see and use as reference material. It was interesting to note that Cornwallis seemed to prefer the simpler uniform, devoid of lace, that became more prevalent as the war went on.  Even in his position he felt comfortable dressing down considerably. 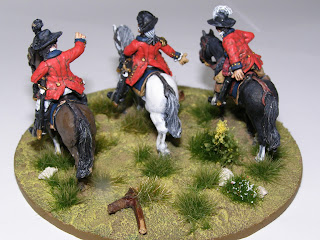 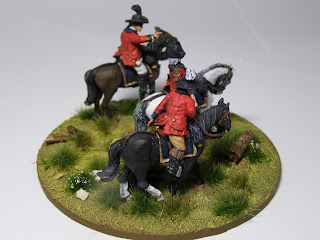 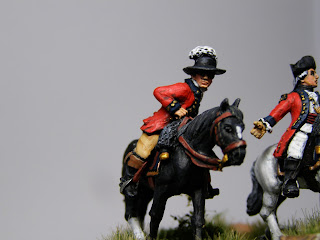 The other senior officers on the command stand could easily be ADCs, though I believe ADCs tended to wear silver buttons.  What actually occurred by this stage of the campaign, in terms of procurement of buttons, who knows.  As Cornwallis is the commander and my main interest is the Southern campaign of 1781, I decided to have these officers also in a simplified uniform, far better for being in the field and not getting lace snagged on trees and so forth! 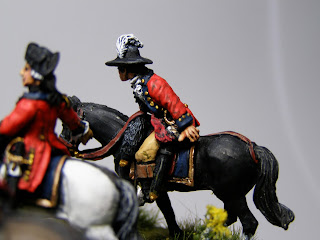 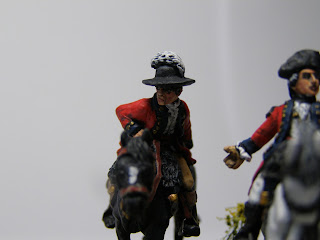 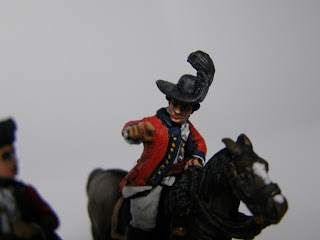 The Earl Cornwallis is a Foundry figure and the other two officers are from the excellent Perry Miniatures range.  I used Foundry paints mostly but did finish the red with Vallejo 70.947 Red to make the colour more rich and stand out from the scarlet/brick reds of the lower ranks. 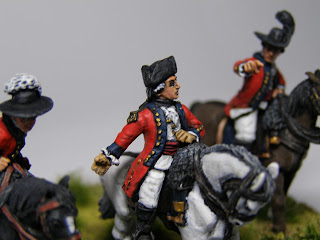 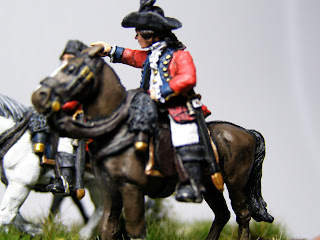 The figures were a pleasure to paint, and took a lot less time than I thought they would.  I don't know the reason for this - I think I just enjoyed myself!  The first battle for these officers is due in two weeks time.  We shall see how they perform!
Posted by Jason at 02:30 12 comments: 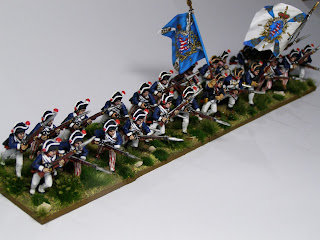 A change of historical periods again for me with my latest addition.  I have been busy in my absence from blogging! 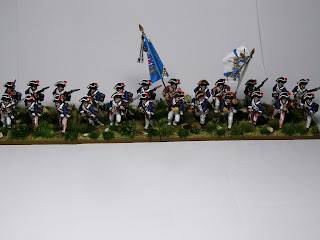 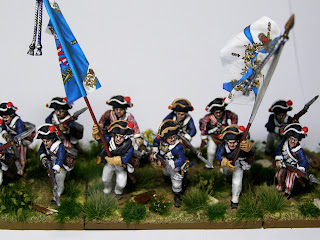 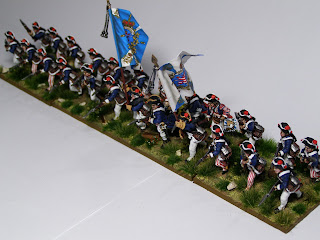 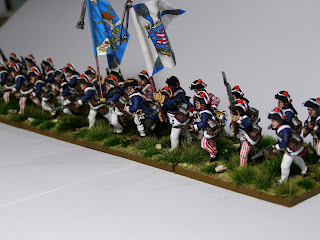 The regiment saw action at New York, Eutaw Springs, Stono Ferry, Charleston, Savannah and Yorktown.  The regiment also famously saw action at Guilford Courthouse where they gained renown for their courageous actions during the desperate battle. 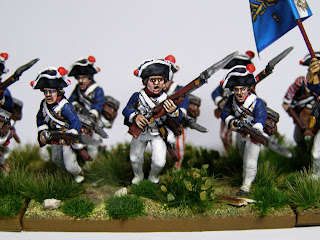 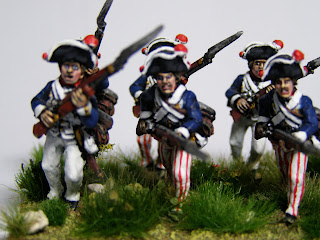 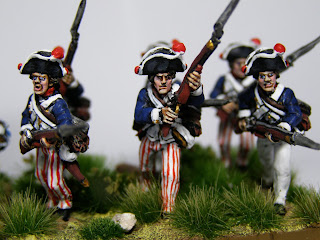 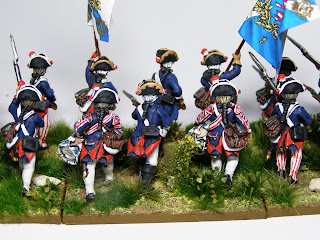 These figures are from the fabulous Perry Miniatures range.  Flags are from GMB and paints used are mostly from the Foundry range. 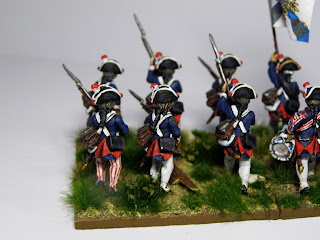 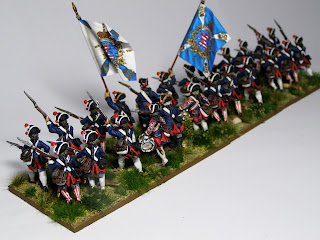 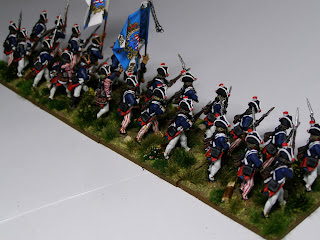 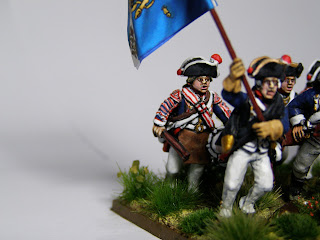 I couldn't resist painting some of the troops with 'mattress-ticking' overalls in a red-striped scheme.  I guess that the John Mollo book 'Uniforms of The American Revolution' left a deep impression on me. Despite an aversion to painting straight lines, I felt these just didn't look right until I had painted around a third of the regiment with stripes (after which I felt in need of a well-deserved drink!). 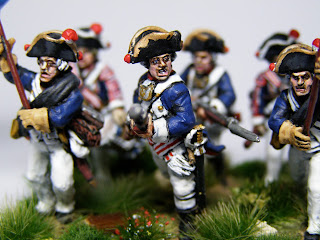 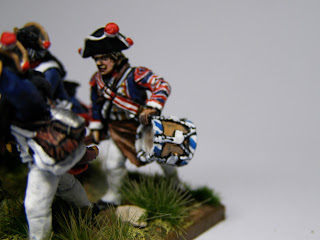 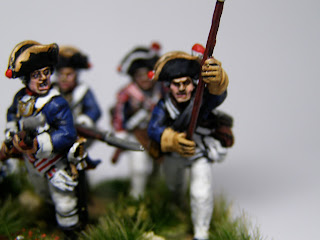 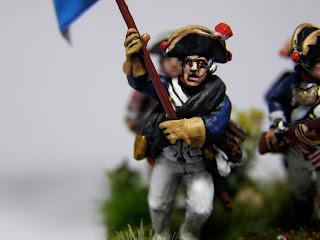 So, I am back into painting American War of Independence/Revolutionary War figures again.  There are several reasons for this, one being that I have a game scheduled in December.  I started this collection in 2008 and have never had enough figures for a game.  I now have enough...just...but I may need to use some French Indian range troops to fill in some gaps.

I am desperately painting Lord Cornwallis and two other commanders for the game.  Competing with this is an exam in December, and two weekends of Brown Bess shooting events (another reason for getting the inspiration for this fascinating period of history again!).