This isn't a battle report as such, more a notepad to share my thoughts on the game Team Yankee, the recent offering from the Battlefront stable.  I must admit that I have never really tried playing a modern game since trying to get my head around 'Challenger 2000' in the late '80's/early 90's.  So Team Yankee looked like being something that I might get to fill this gap in my wargaming. 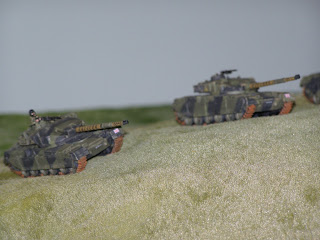 Last year I found a set of WW2 rules which I thought were superb but which would take some getting used to.  These were Battlegroup Panzergrenader (2nd Ed), which took me a year of dipping in and out of before I took the plunge and actually played a game with them.  I found that these actually gave an excellent game.  The author of these is an ex-British Army officer and has an understanding of  the effects which really need to be modelled into rules.  The game proved this right.  My thoughts at the time was that I would make my own version of these rules modified for a WW3 type encounter. 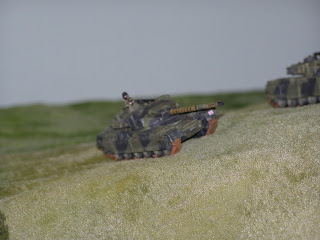 Well the last year has shot past and I could not even remember how BG Panzergrenadier was played when I picked up the glossy and very attractive Team Yankee.  Reading through it the rules seemed very playable.  I got out my 1:285 GHQ vehicles and played the rules in sections.  It all came together very well.  There were a few small niggles; I really couldn't understand what role commanders had in the game. It seemed that if one was killed, you got to throw again and if you got 3+ he is resurrected. If not he is dead - though this doesn't seem to affect play in any way.

Likewise, there is a mistaken target rule which protects valuable teams (the word 'team' is used a lot - and certainly more than it was used in the British military in 1985 - and really it gets confusing and almost like a sports match - it's also used to a excruciating degree in modern parlance 'team this' and 'team that', its becoming a pet hate!).  I digress, this rule seems a bit unnecessary to my thoughts. If you have a valuable 'team' then tactically position it where it could be better protected.
This rule was ditched immediately.  I'm getting better with experience at spotting stinkers. 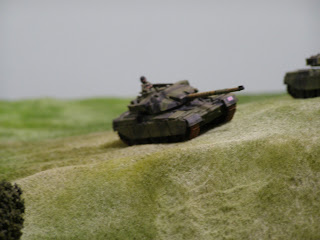 There are some really good elements to the rules.  It is quite fast play. The firing and armour protection seems to play really well.  I like the fact that crews bail out of tanks out of panic of being hit. Accounts from Normandy show even Tiger crews getting multiple hit on their tank would sometimes panic and bug out of a perfectly good (if shell dented) working tank. Self preservation is a powerful thing. It was great to use a whole range of really interesting kits in non-complicated way on the field - great to see and for the first game, a great novelty 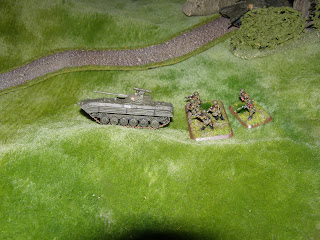 The 2nd play test involved Ian's superb 15mm models.  These are all by Battlefront.  Ian has done a great job on these.  The DPM uniforms on the British look great as do the Soviet uniforms too.  The Battlefront models are great and the books (like 'Iron Maiden' are superb). 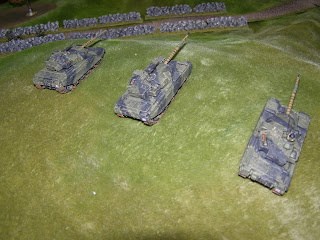 It was an enjoyable game but the list of weird rules to look at started to grow.  It became apparent that the rules when matched with what I hope/expect to see in a rule set, and also compared to my understanding/experience of modern warfare, the rules have some major holes in.  Holes you could drive a troop of Chieftains through.  Not only could they drive through but they could advance up to the enemy point blank and shoot. Because there is no defensive/opportunity fire for the defender. This is a major flaw and actually makes it all a bit silly.  There is also no bonus for being point blank and shooting too - you might as well stay and hold off at max range - it's the same dice throw for 20 yards or 2000 yards for a modern MBT in this game! 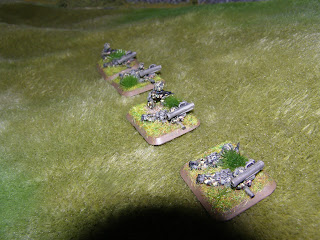 Command and Communications are one of the most important elements in warfare. This is more true now than it ever has been.  There really is none in Team Yankee. Everything just seems to do what the heck it likes.  You want to drive your tanks through that gap and up that hill and shoot - no problem just do it.  There is no 'friction' for commanders, no hard choices, no scope for 'Murphy's Law' to kick in.  Any of us who have spent time in field knows how this will kick in often repeatedly, even on exercise.   Communications are horribly fallible - sometimes the oik manning the radio has simply nodded off after being awake for so long, sometimes the commander is too busy with a crisis, sometimes the commander doesn't want to receive the orders he has. Command and communications should be portrayed in the rules in some way or otherwise what we are trying to represent fails badly and we are better off playing a fun game like snakes and ladders and forget trying to represent modern battle in any way, game, shape or form.

'With skies darkening there were no clear orders coming over the radio, only curses, claims of hits and reports of vehicles brewed...."  5 Royal Tank Regt. Western Desert. 1941. 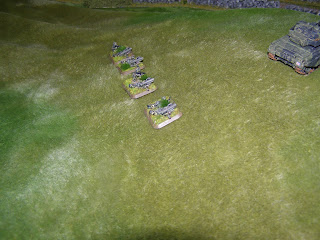 Ditto for reconnaissance - really I couldn't see anything of value in the rules relating to this important aspect.  Wellington always wanted to know what lay on the other side of the hill.  Well in Team Yankee you could just drive straight over and have a look as there seems to be no hidden units (other than an ambush mission at the back of the book). No having to use skilled recce troops to spot the enemy.  It seems pointless having lovely looking Scorpion tanks and having no role for them other than to use as shell stoppers to protect your Chieftains.  I'm not sure the Household Cavalry would have been too impressed with that as a role. 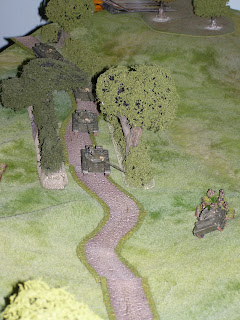 There is a pinned down rule (thank goodness) but it depends on either 12 teams taking 8 hits or a smaller group taking 5 hits in a single shooting step.  I think this could be made to work better.

The melee rules were confusing and I have so far been unable to devote the time to fathom this out properly. It seems better than the melee rules in Flames of War which just seemed daft. 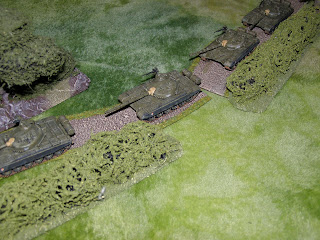 So what am I doing about it. A magazine recently was critical of the way many wargamers interfere in a set of rules to improve it.  I don't have a problem with tampering with rules.  The Black Powder set of rules is robust and sees itself as a tool kit to add as one wishes.  It works very well like that. There are major changes I have made with ideas, Ian and I have devised or I have gleaned from other clubs and sources online.  I think Black Powder with these modifications is now a superb set of rules but it needed these tweeks to become that good.

Many wargamers are extremely well-read, using first hand accounts, actual post-battle reports etc and have really studied their chosen areas of research in detail.  Some wargamers also have first hand military experience which they can bring.  Very often this far exceeds a rule-writer's knowledge. Combining all of this can and often does really enhance a set of rules. 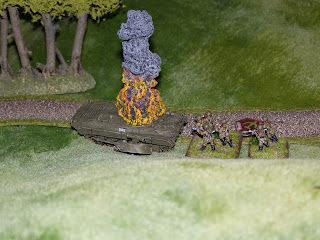 In conclusion Team Yankee is a fairly good basic set of rules. It has some really good elements and some bad and some huge gaps which need filling to make it into something really worthwhile.  I am currently devising rules to cover the C2 element and the recce elements.  I am inclined to borrow heavily from BG Panzergrenadier, particularly the HQ Command Points, phased play to allow defensive fire, recce and melee.  It could be that eventually I will just adapt Panzergrenadier to a modern setting. 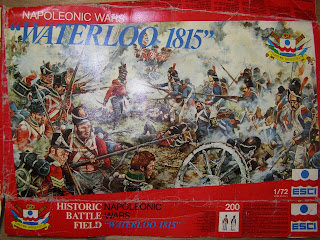 Two posts in three nights what am I thinking!  Well this rapid post is all due to a discovery made in the attic yesterday.  This probably represents the turning point for me from being a modeller to being a wargamer.

From the age of about 8 I stuck model aircraft (and my fingers) together and attempted to paint them.  After a good many kits and reaching the age of around 14, I had become fairly proficient for my years.  Other recent attic finds have surprised me at the detail I tried to put in at that age. I even had a 1/24th Scale Hawker Hurricane where I even painted a handlebar moustache on the pilot!

Certainly, I went through that phase of throwing marbles at plastic 1/32 airfix figures in garden gaming, not exactly HG Wells style but I had fun. But I hadn't tried wargaming 'properly'.  A friend had shown me how to use a ruler to give rifles a distance and grenades other distances but lethality was decided by who was in range rather than any dice throws, effects of cover etc so it was barely one up from the marble method.

I think there were 3 co-incidental factors which happened at the same time.

1.  A history project  in class which we had to work on and present (I chose Waterloo because of the next point).

2.  A rather good book on the Battle of Waterloo which I had on near permanent loan from the school library. There was something about the first hand accounts which wouldn't leave my imagination alone.

3. This battle set produced by Esci especially the artwork by Rick Scollins, I mean look at it!  It has everything - drama, colour, desperation, heroic officers, smoke, battle lines wavering.  This picture inspired me as I painted as many plastic 1/72 figures as I could get my hands on - (not realising that within a few years the paint would ping off!).

When I found this lid,battered as it was, it all came racing back, those thoughts and inspiration which it gave me some 33 years ago.  I have the box sat behind me at the moment rescued from the attic.  I don't know what to do with it.  Thoughts of framing it come into my mind.

One thing is for sure though - I'll be keeping it safe now and seeking inspiration from it anytime I need it.  Thank you Rick Scollins (sadly deceased now I understand) for helping me to get into this fine hobby with your amazing artwork!
Posted by Jason at 01:04 4 comments: