The Roman General was painted up about 15 years ago and  I thought he was well over due being put onto a decent base. 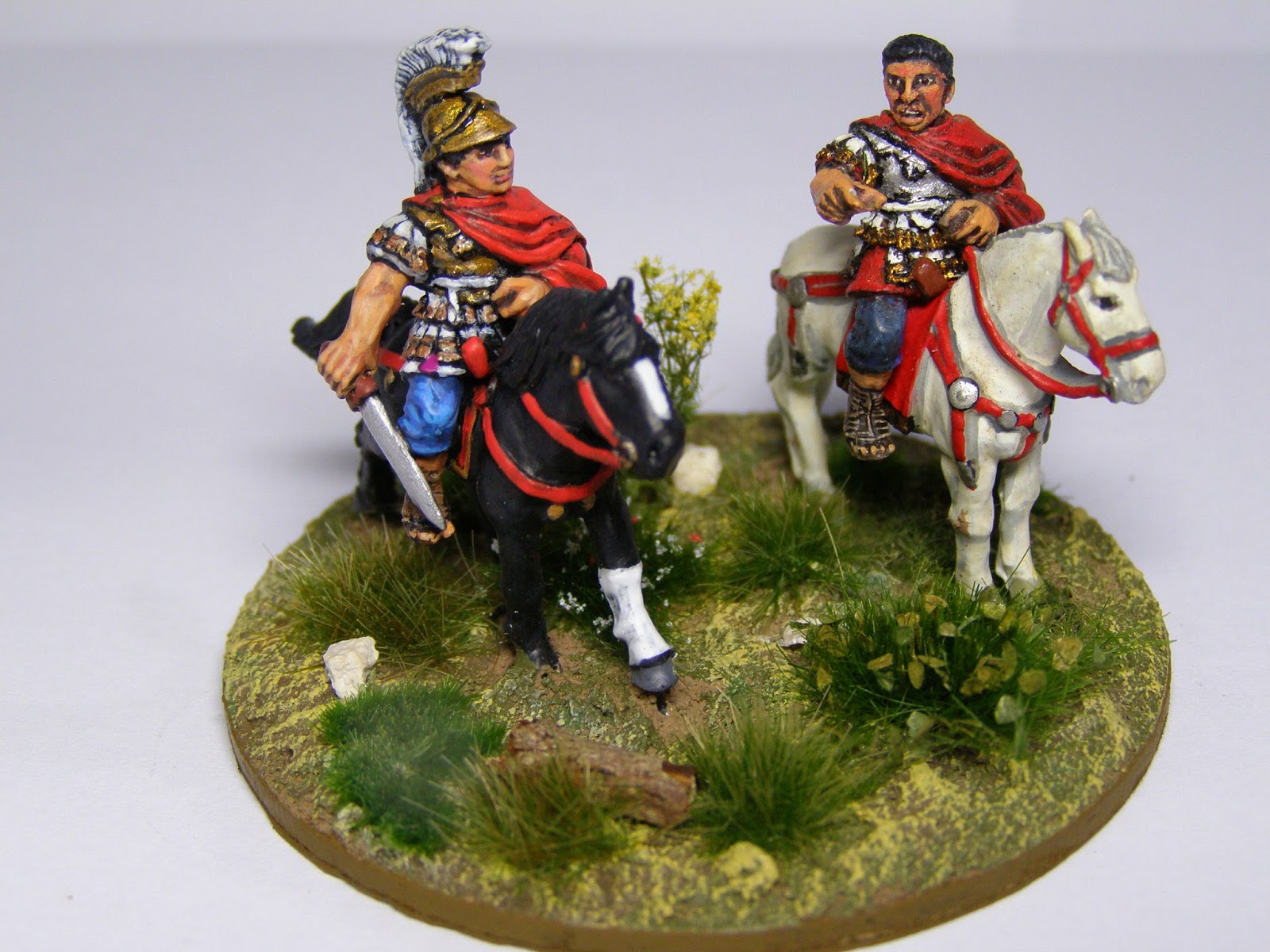 Having been attached by himself to a single piece of card all those years ago, I decided to add a mounted Legate to the stand to lend an extra sense of authority.   So there is something like 15 years painting time between these two.  Some areas have been freshened up on the General in more recent years.  If I remember, I originally painted the cloak with an enamel but it looked decidedly faded so was later painted in a richer acrylic. 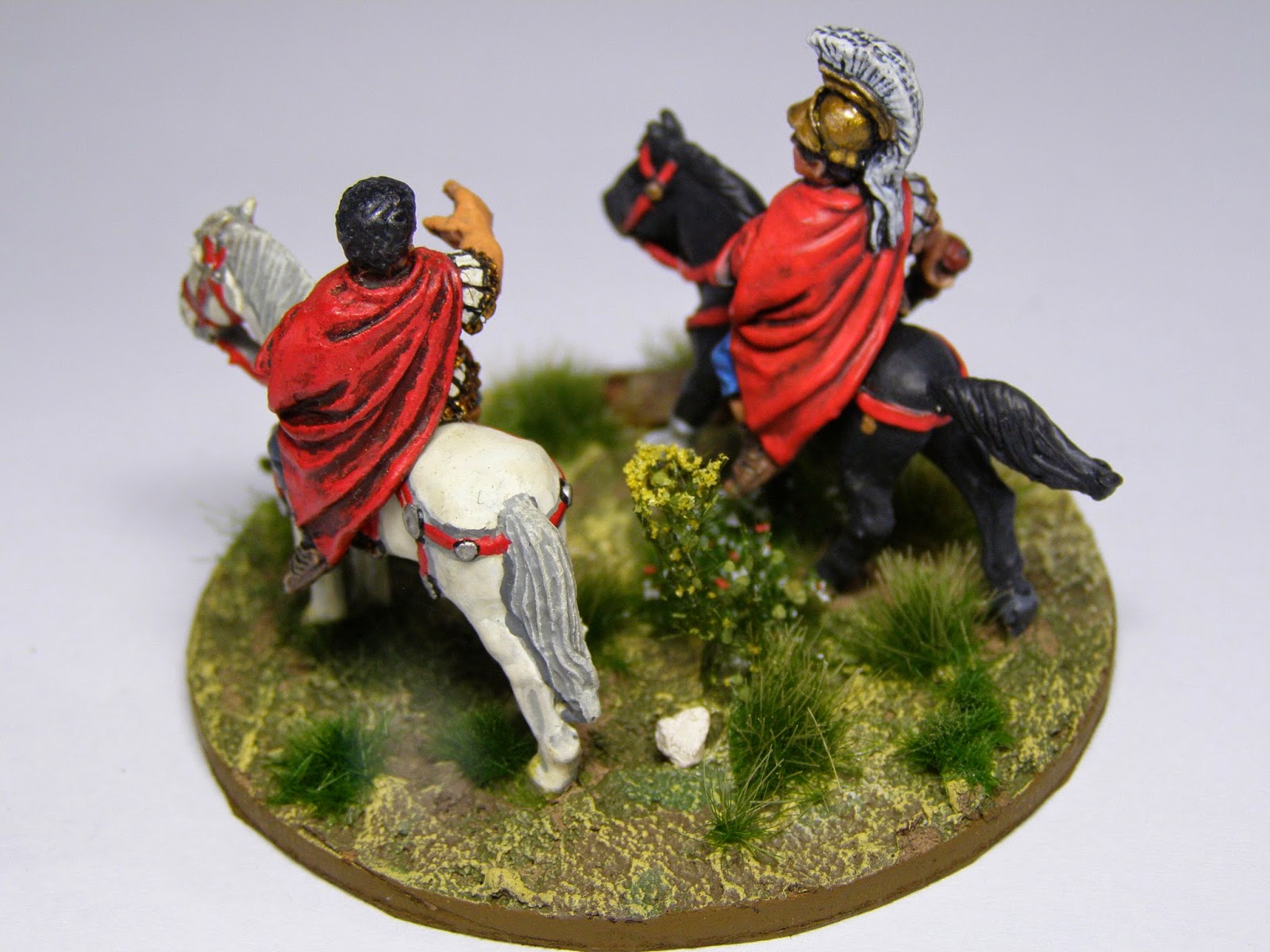 Both figures are from the 28mm Foundry Imperial Roman range 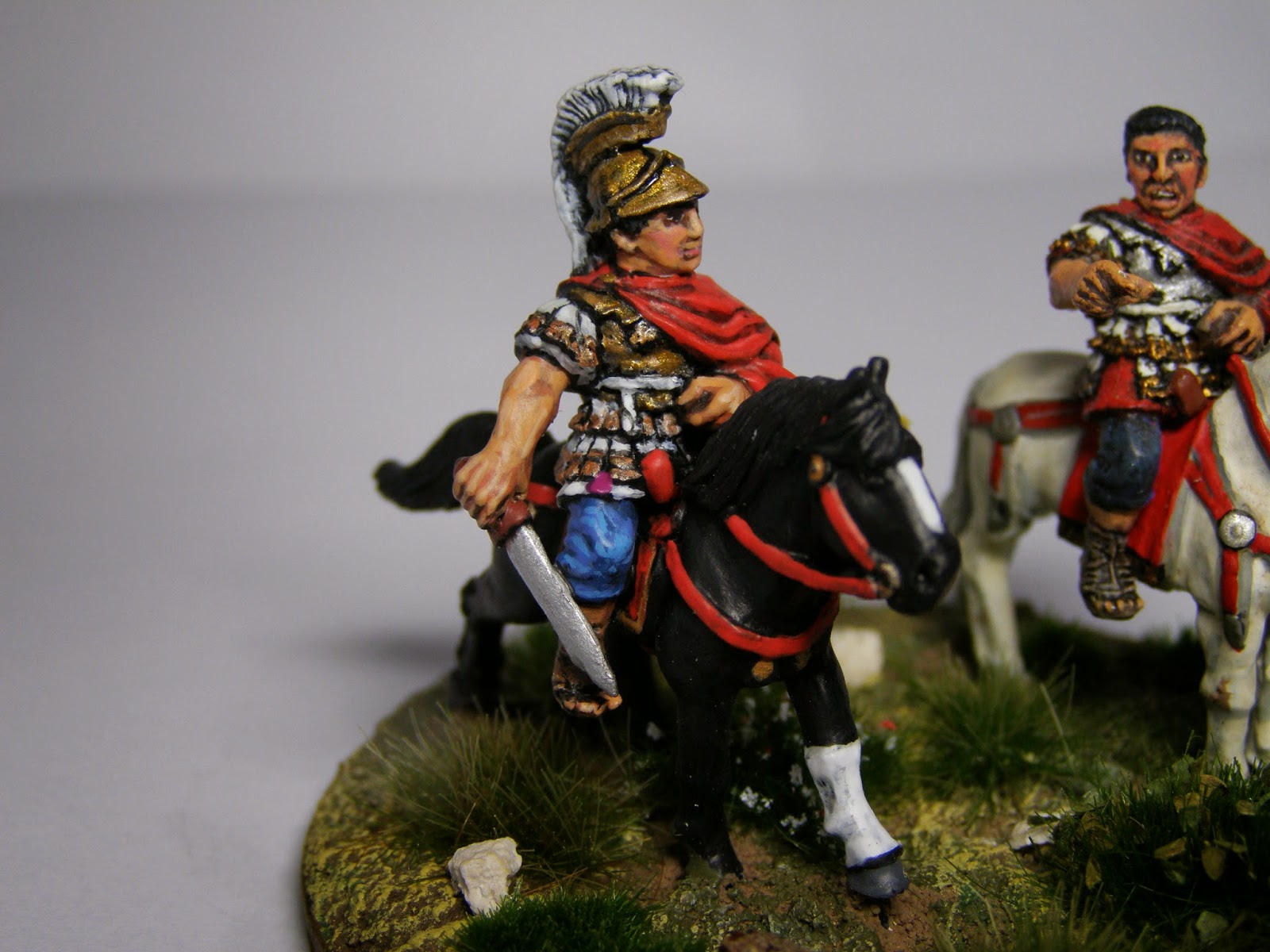 I seem to be painting two scales of Romans at the moment.  Having just read Julius Caesar's 'Gallic Wars' I'm now reading his 'Civil War'.  This has (as probably expected!) enthused me with the Caesarian Roman period.  I've started this range in 10mm while I carry on with the Imperial Romans in 28mm.  My plan is to use Simon Miller's 'To the Strongest' rules with huge 10mm armies so that I can play massive battles in a sensible amount of time. 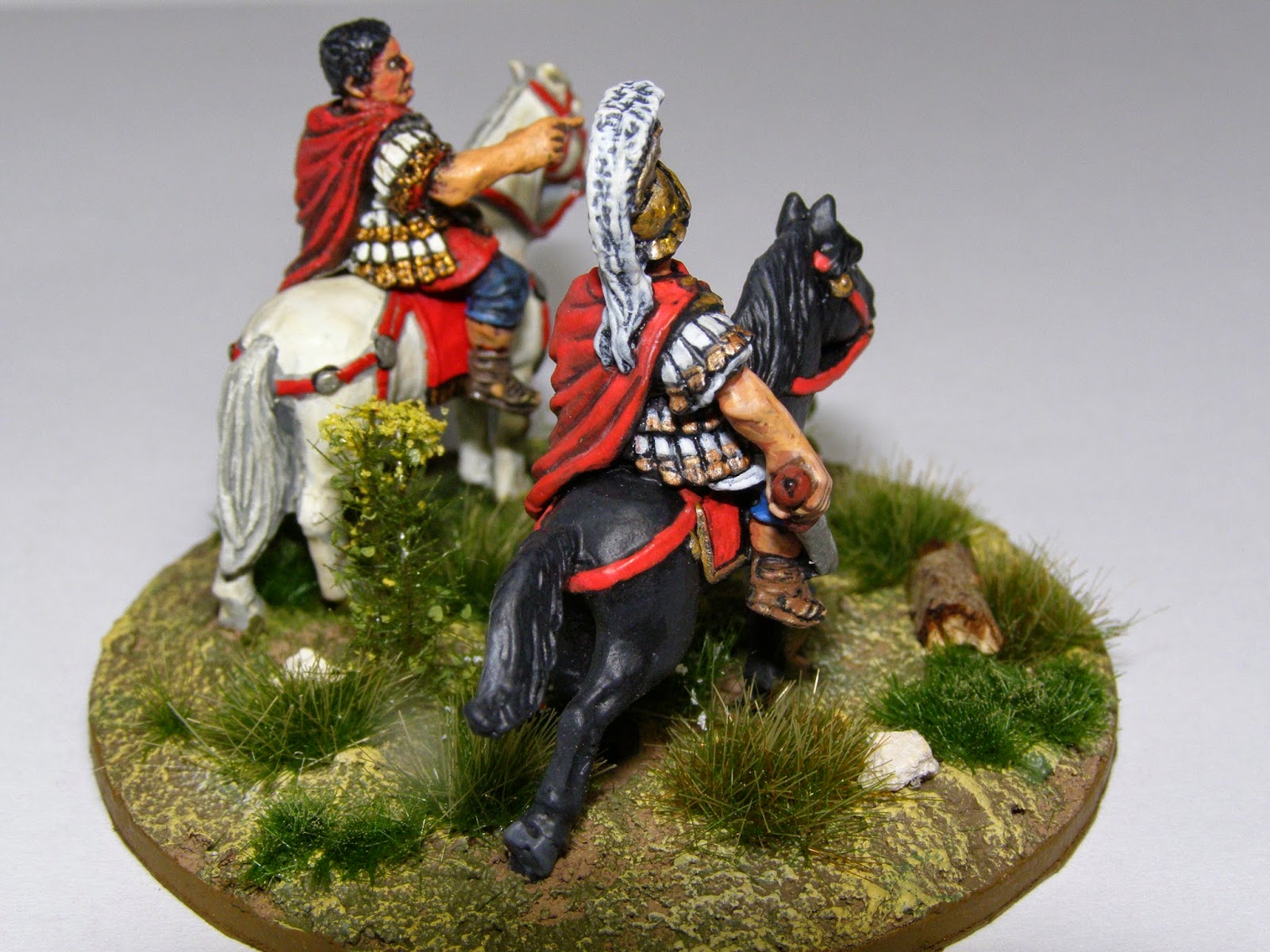 Of course this plan is likely to go awry as my regular wargaming opponent, Ian, has several painted cohorts of 28mm Foundry Caesarian Romans freshly painted and they look stunning.  There must be a latin-named medical condition for anyone painting up 3 x Roman armies at the same time!  I shall hold off doing so for as long as possible!
Posted by Jason at 01:12 10 comments: 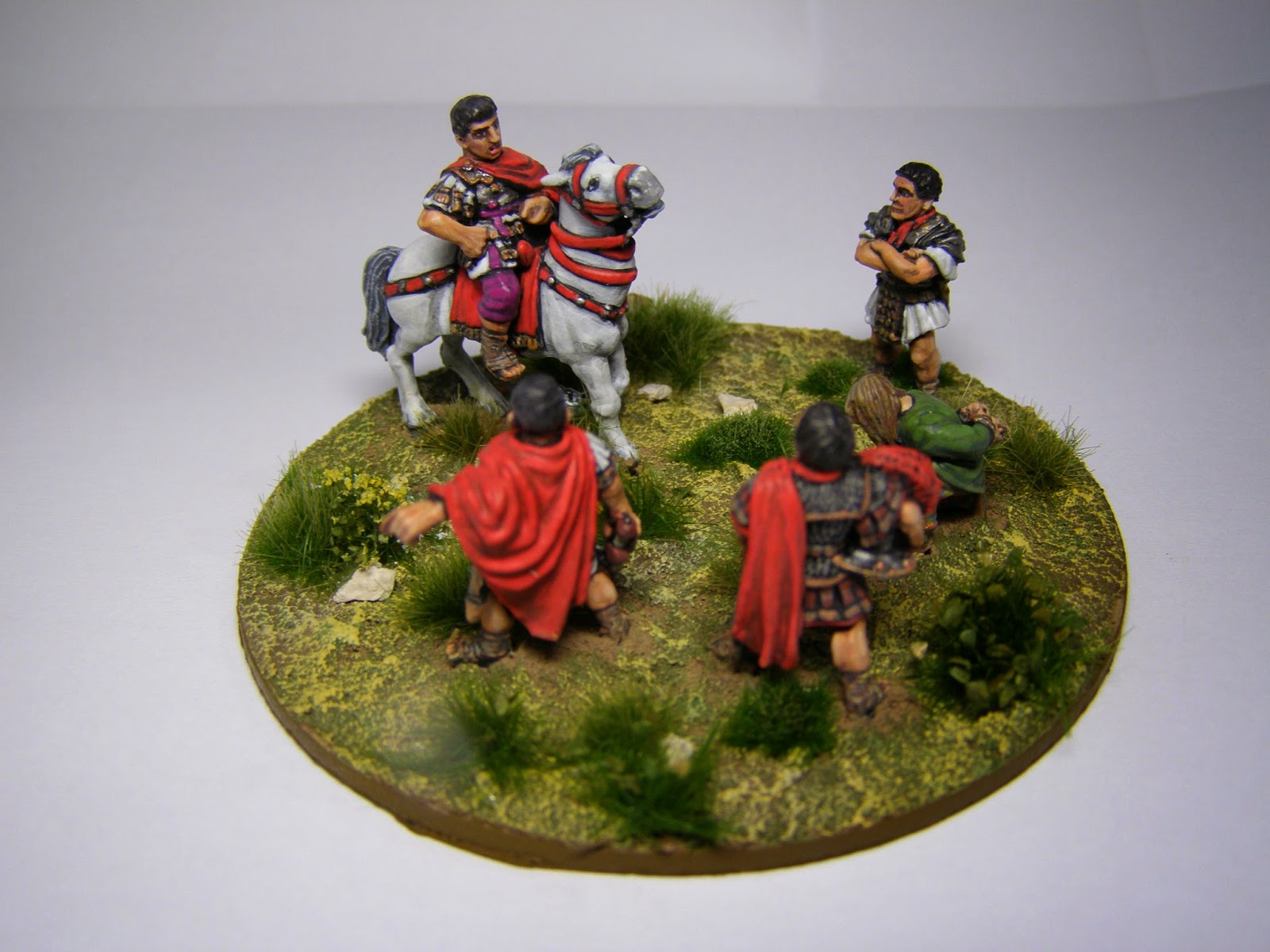 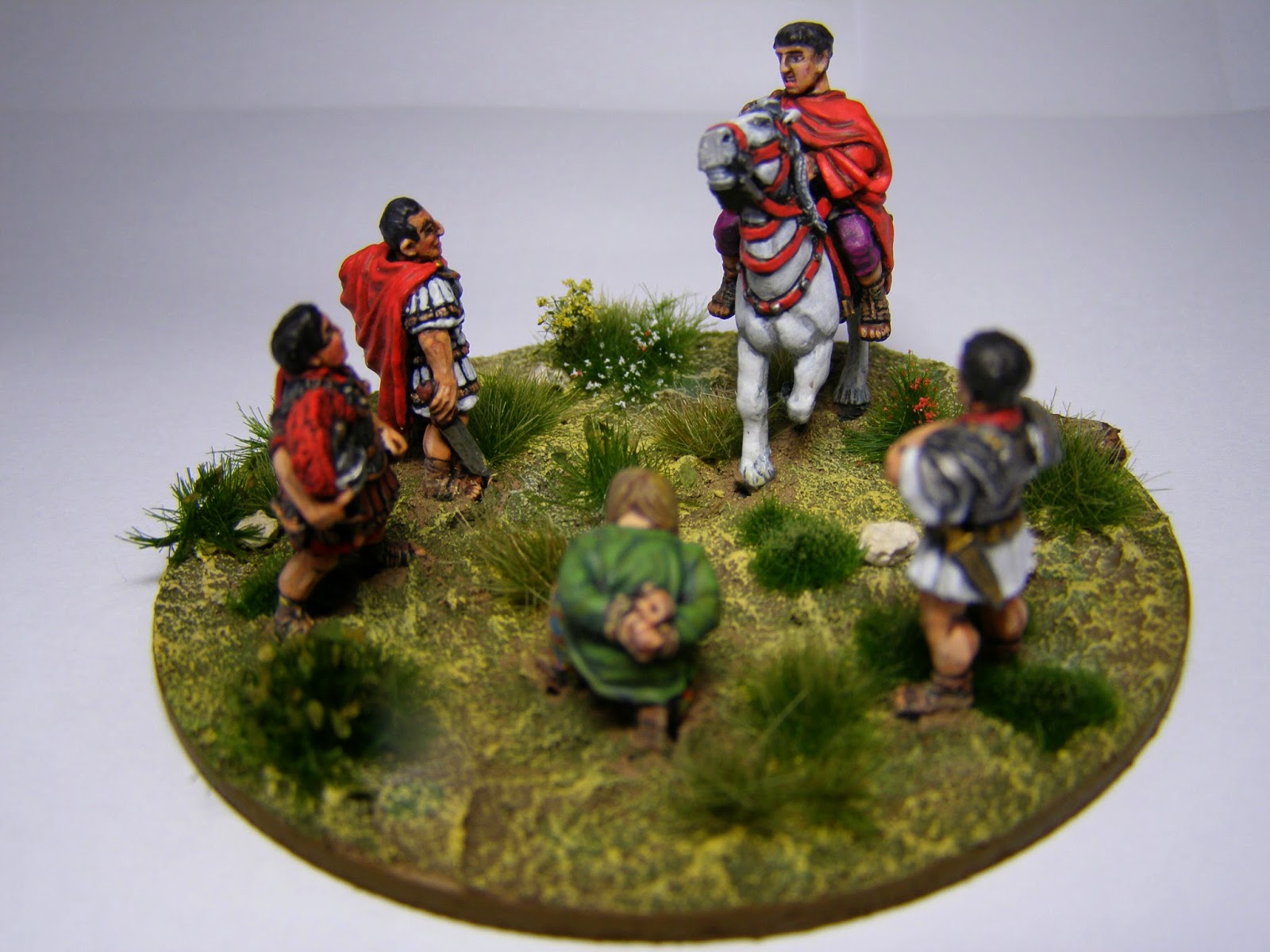 This is a Wargames Foundry model I have had for a number of years and every so often I have pulled the set from out of the press-lock bag, looked at, desired to paint it up and yet was slightly too daunted by knowing that it was going to be one of those 'best effort' figures.  Many times I opted instead to paint units en-masse knowing I could spend the same time painting multiples of figures for the time it would take to do this one.

As I am in a 'Roman' historical frame of mind currently, and enthused by several superb Roman vs Britons wargames of late, I knew that it was about time I had a commander on a proper command stand to command my Legions. 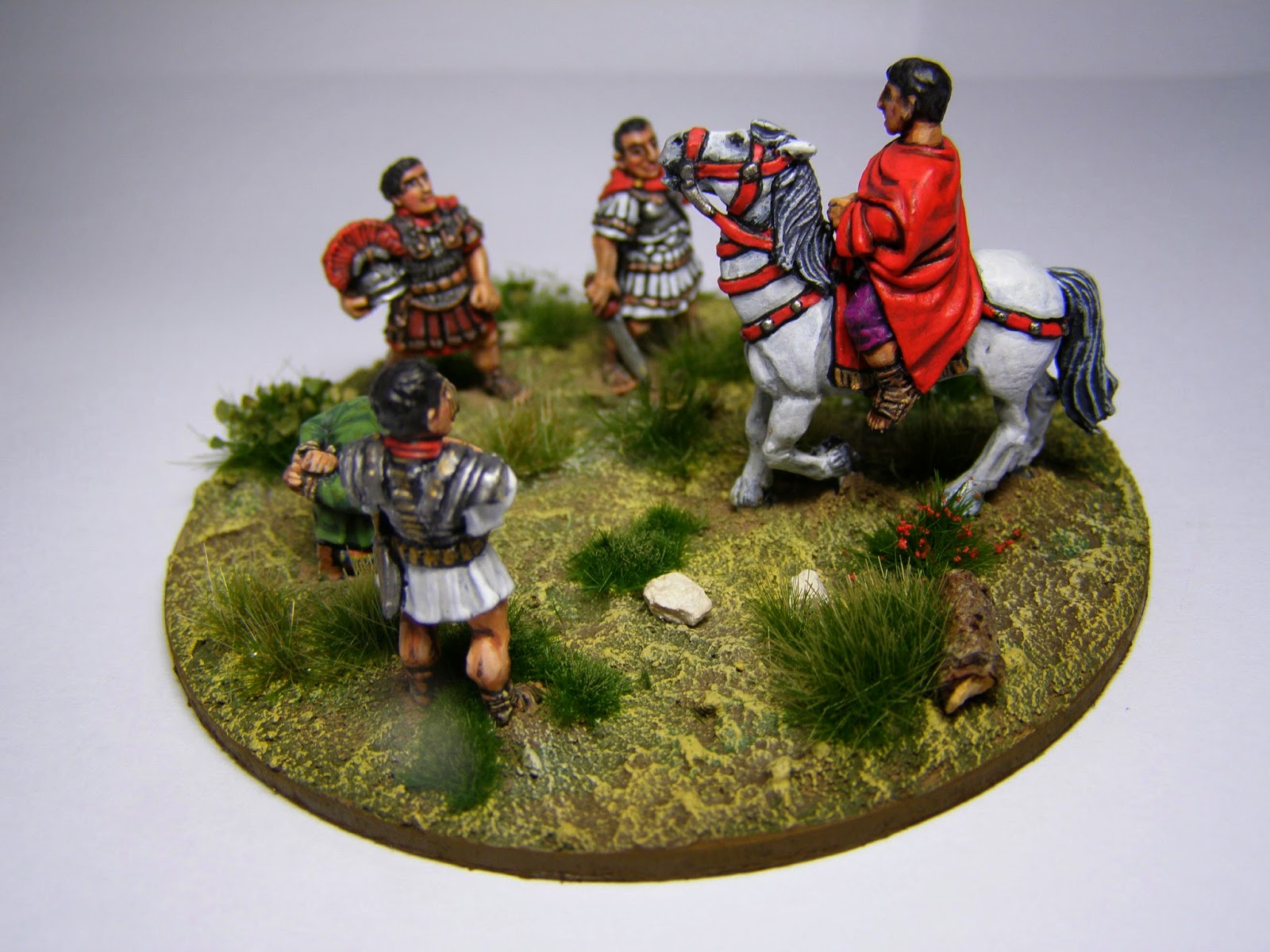 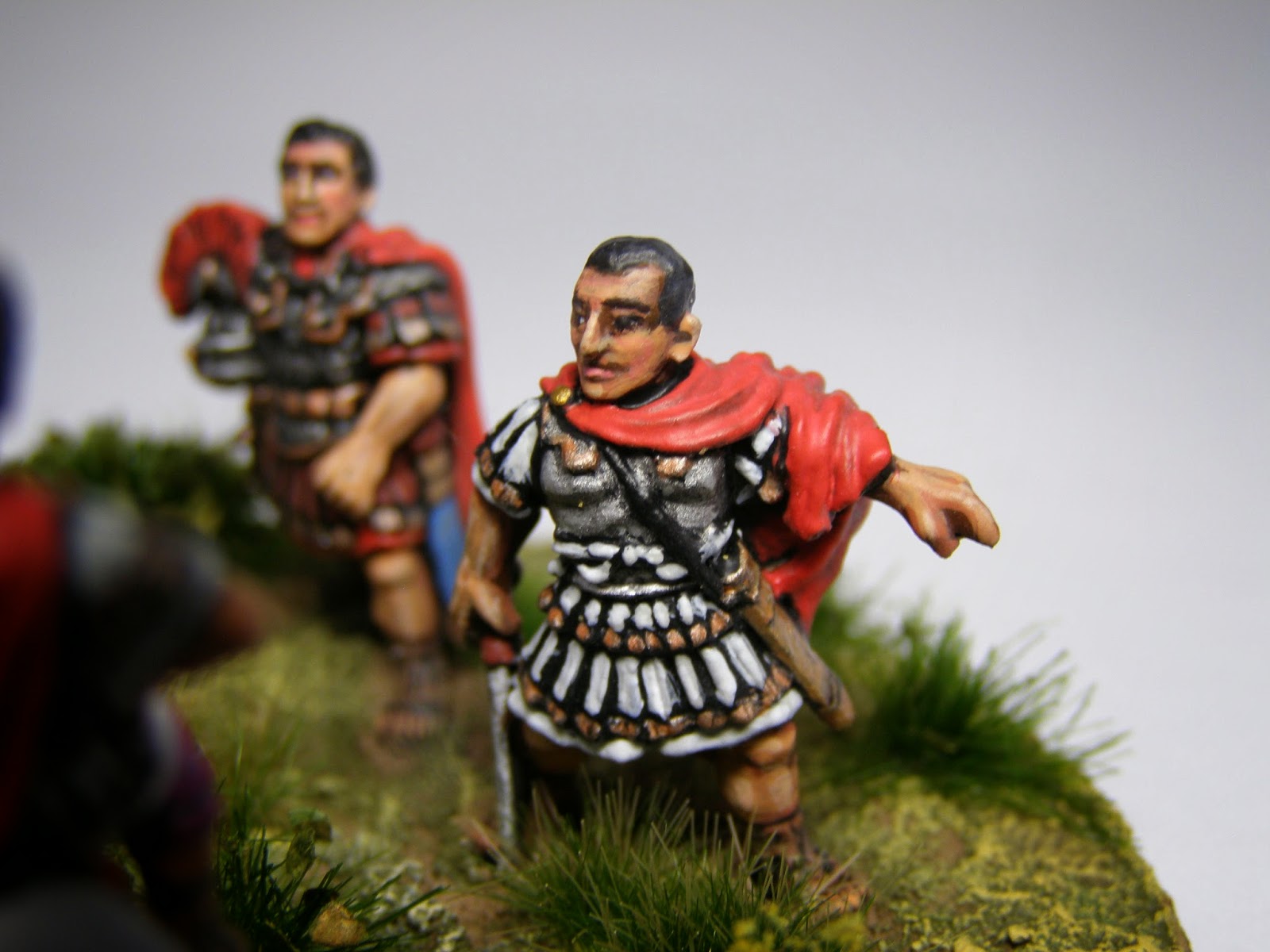 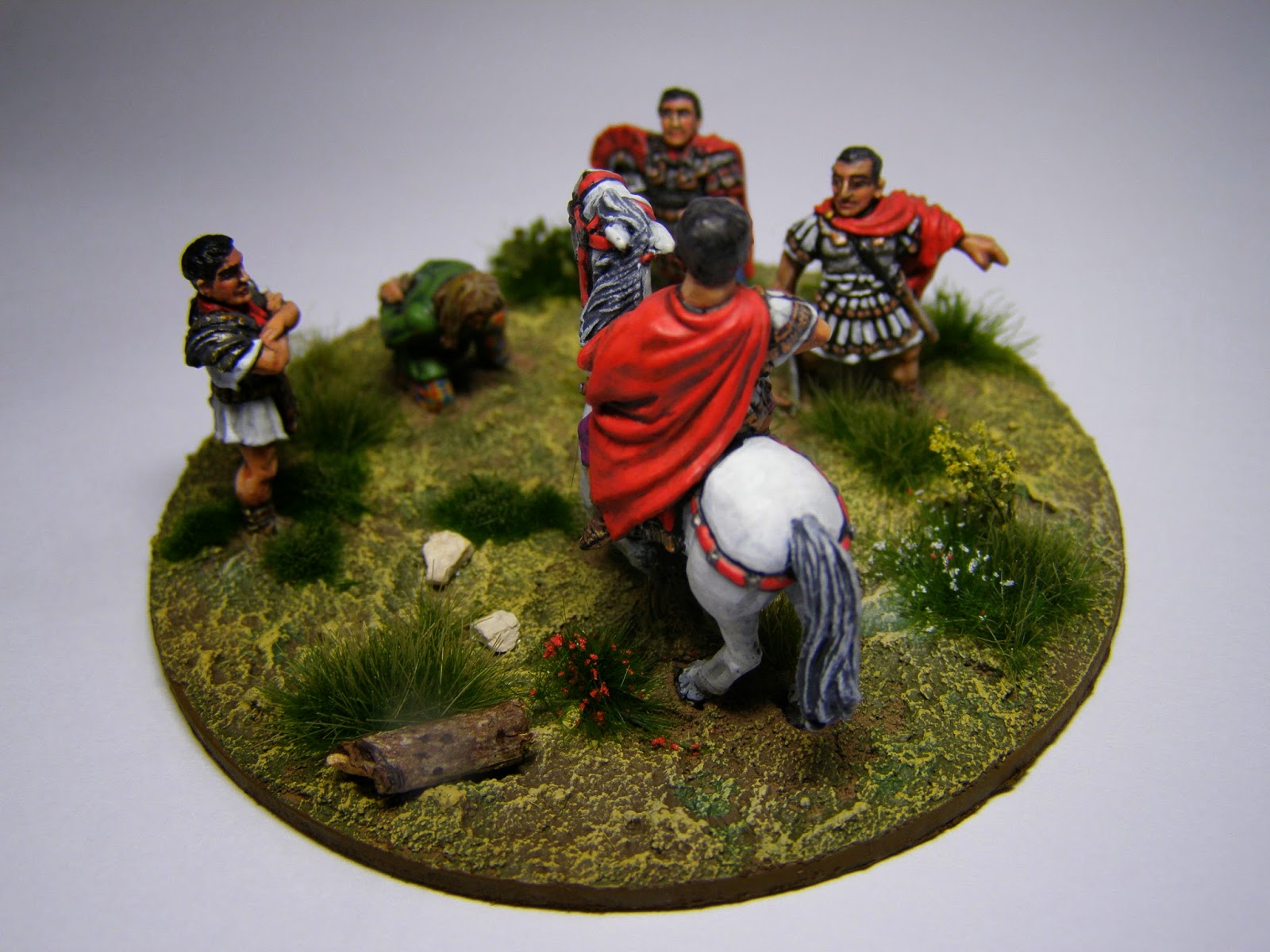 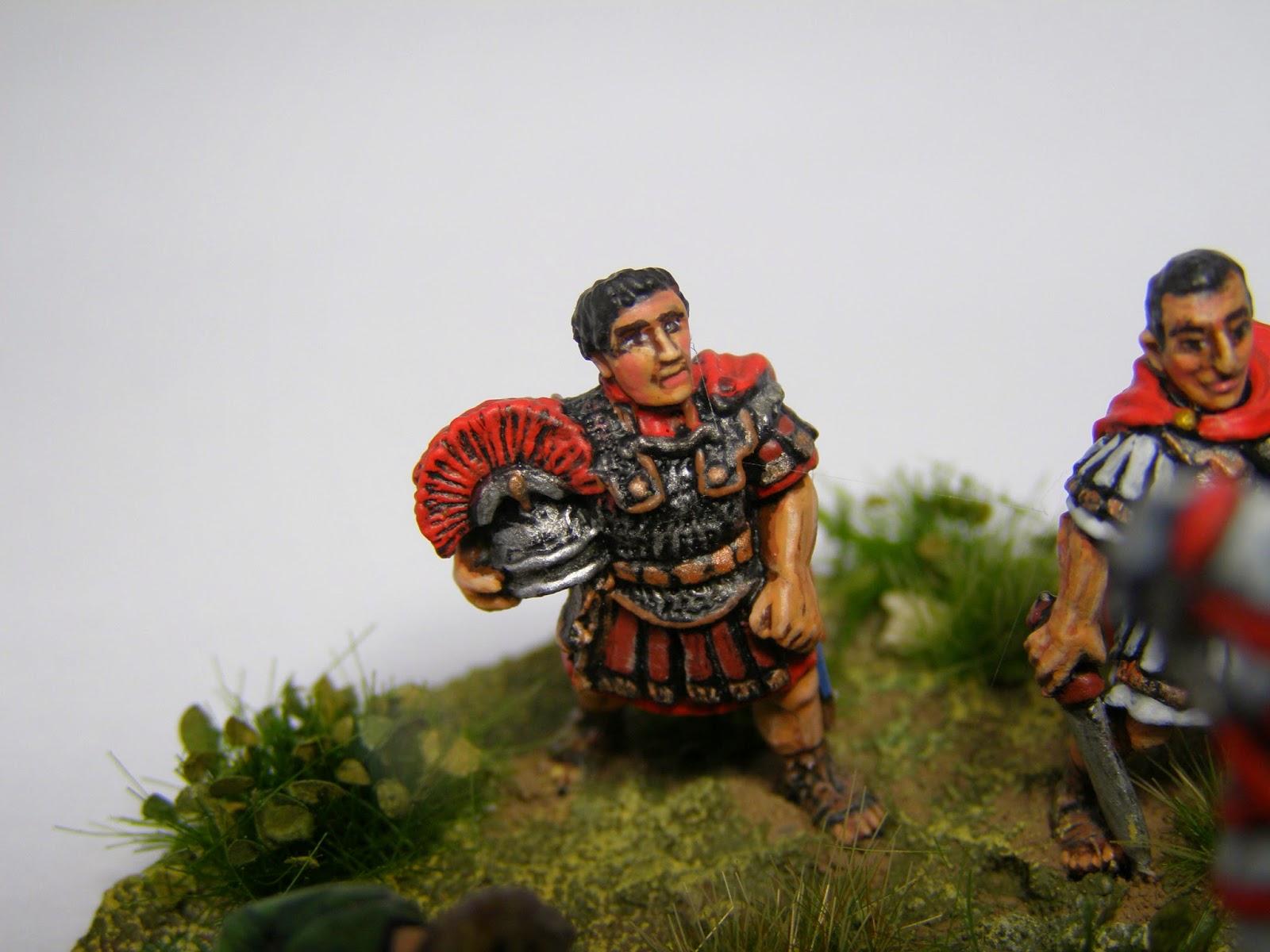 In the event, painting was an absolute joy.  The black undercoat provided shadow for those difficult to get at areas like gaps between pteruges.  I wouldn't go as far as saying that the figures virtually painted themselves, but it was a lot quicker than I imagined and before I knew it, I was trying to find the right composition of the vignette on the base with the figures happily painted and varnished.

Paints used were predominantly from the Foundry Triad range.  Since buying a set of these last year I haven't looked back - I think they are superb paints and I will be getting a lot more of them.  I also used Vallejo and Games Workshop paints (esp Mithral Silver for metal highlights).

I have gone for a softer shade for the edging of the base.  I'm starting to think that black/dark brown edging might detract from the figures and pull the eye towards the frame as it were, rather than allow focus on the figure.  I might be over-thinking this.  I used Vallejo 'English Uniform' for the edging on this base and I feel the softer edge does allow the figures to be the focus. 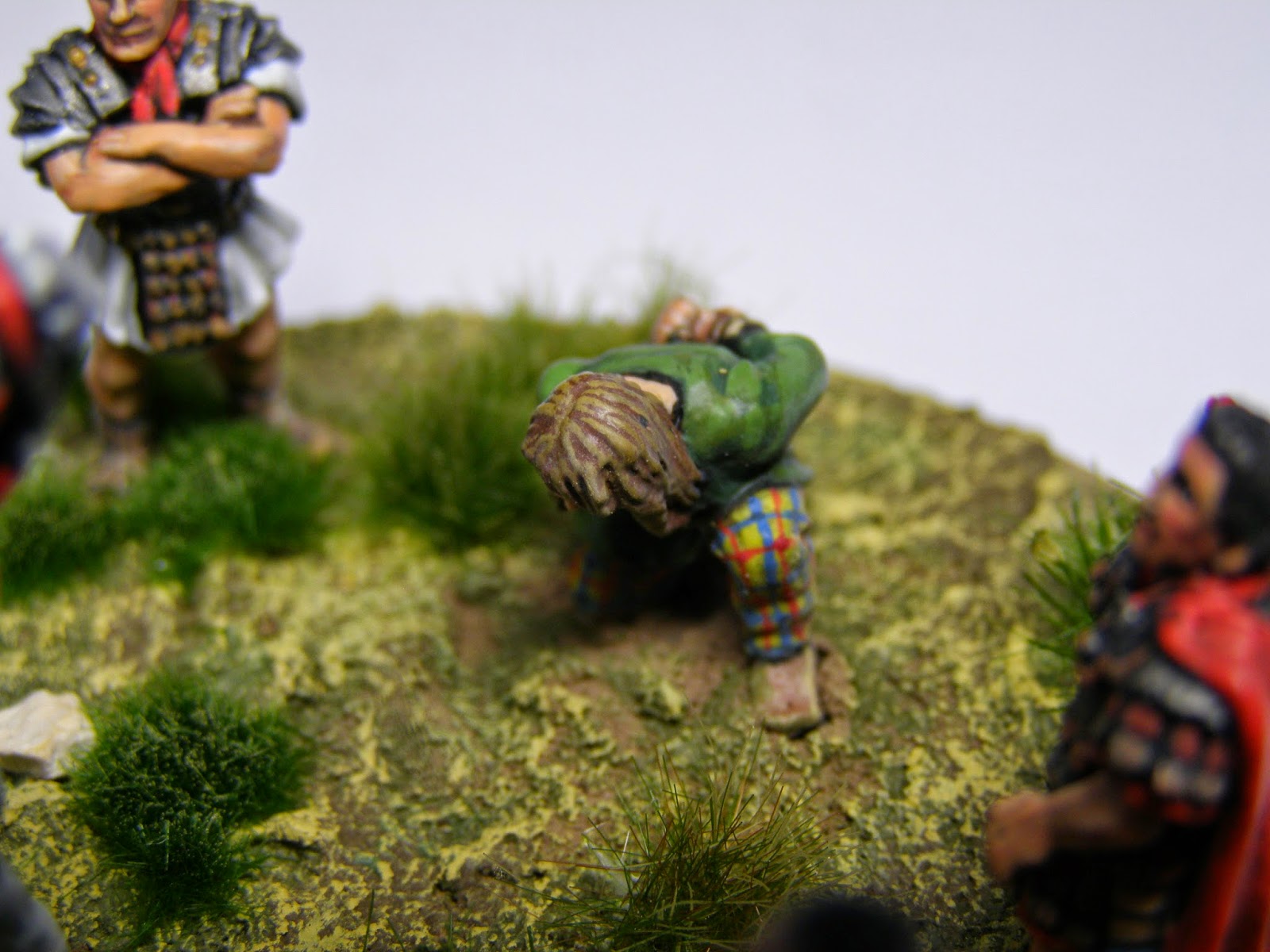 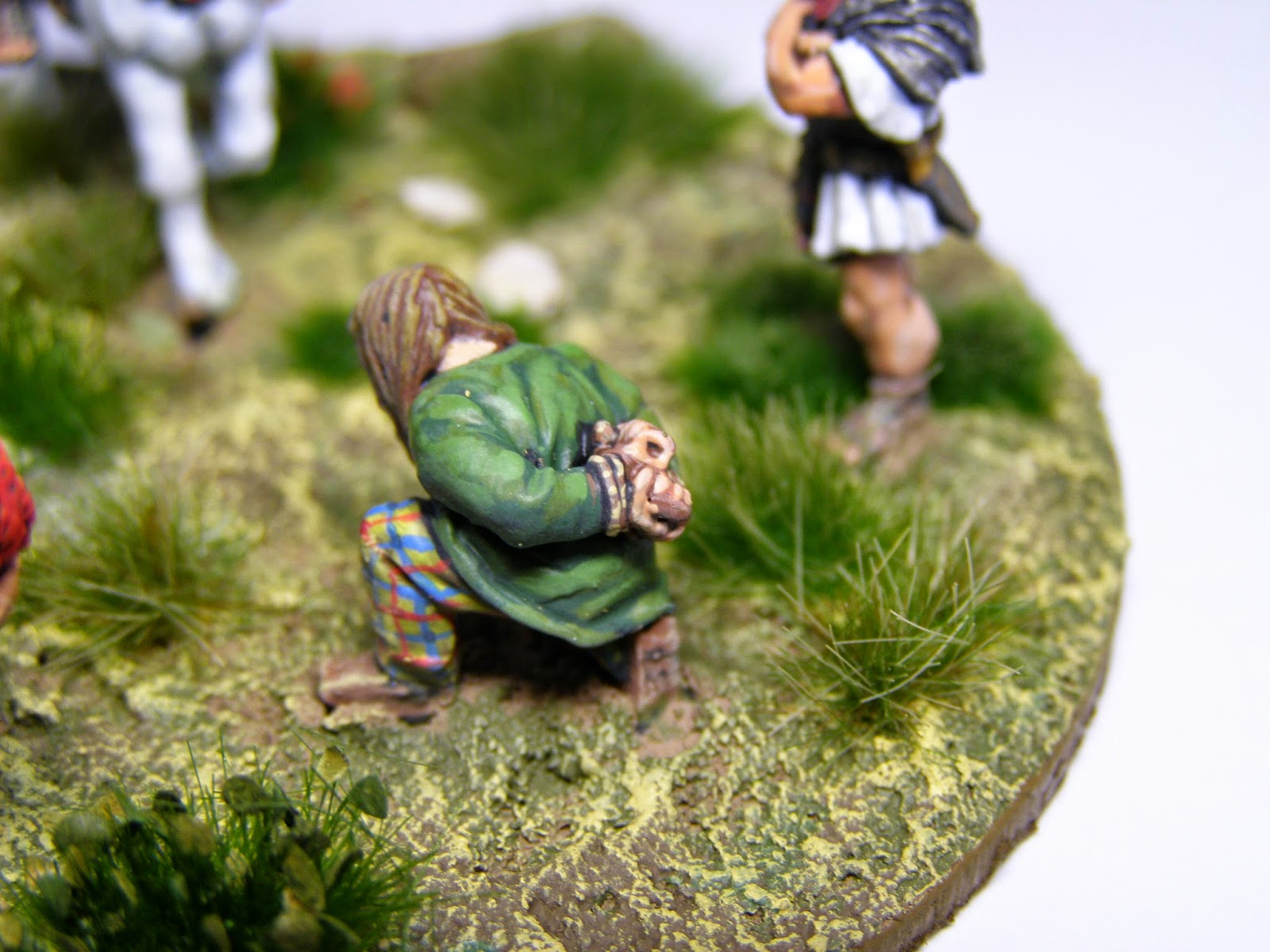 A chap who has had better days than this one! 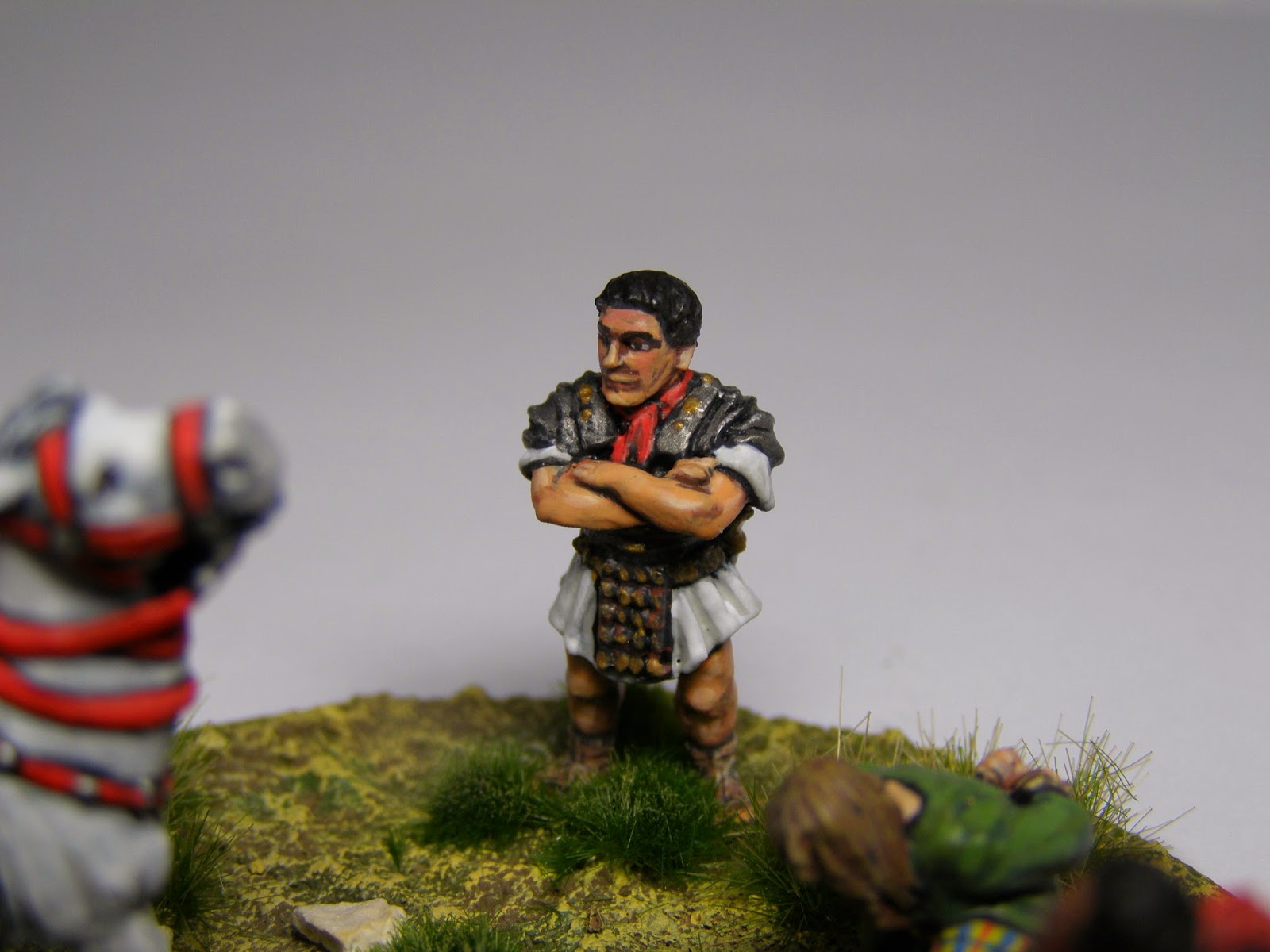 And a few close ups of the main man himself 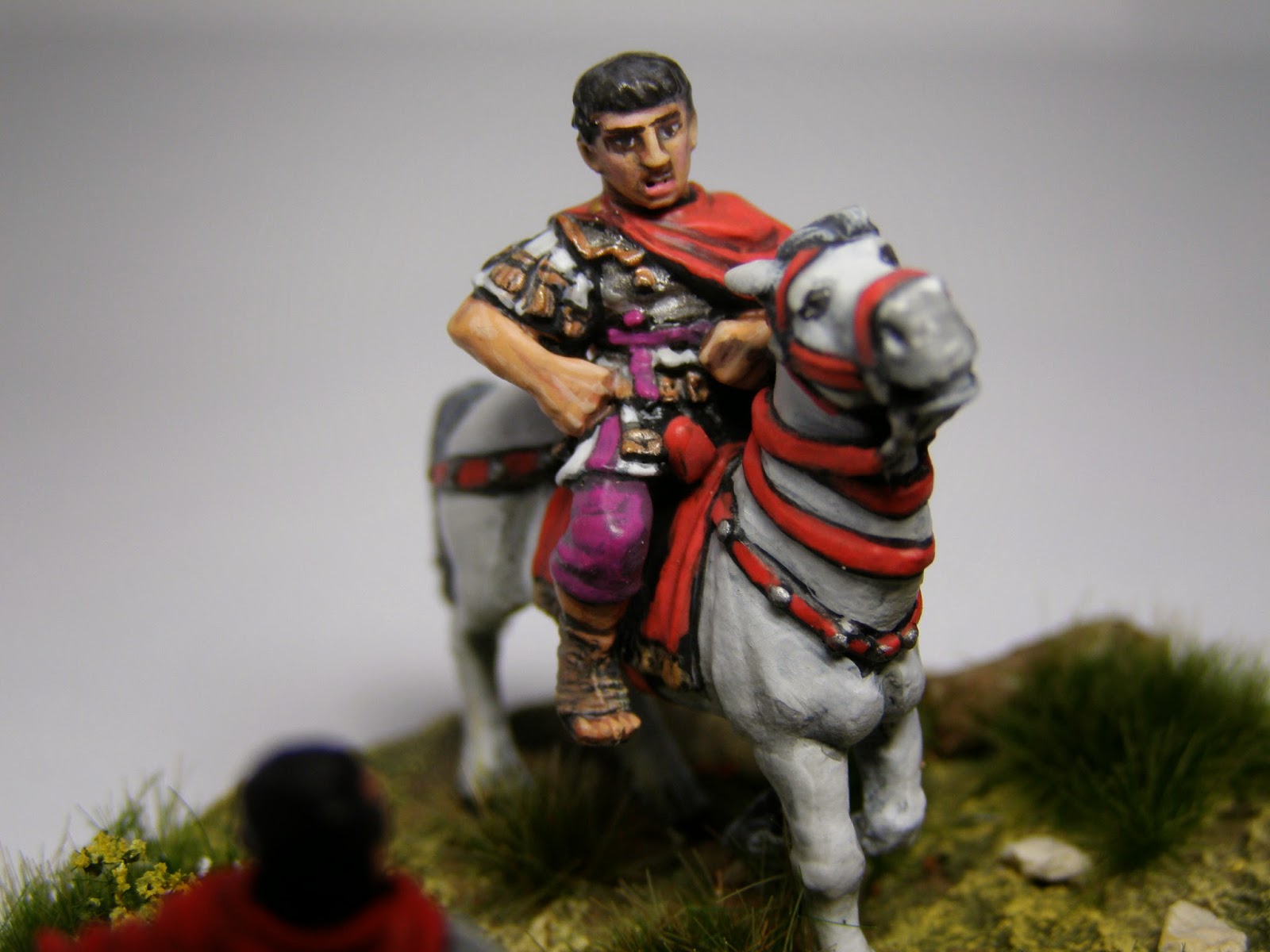 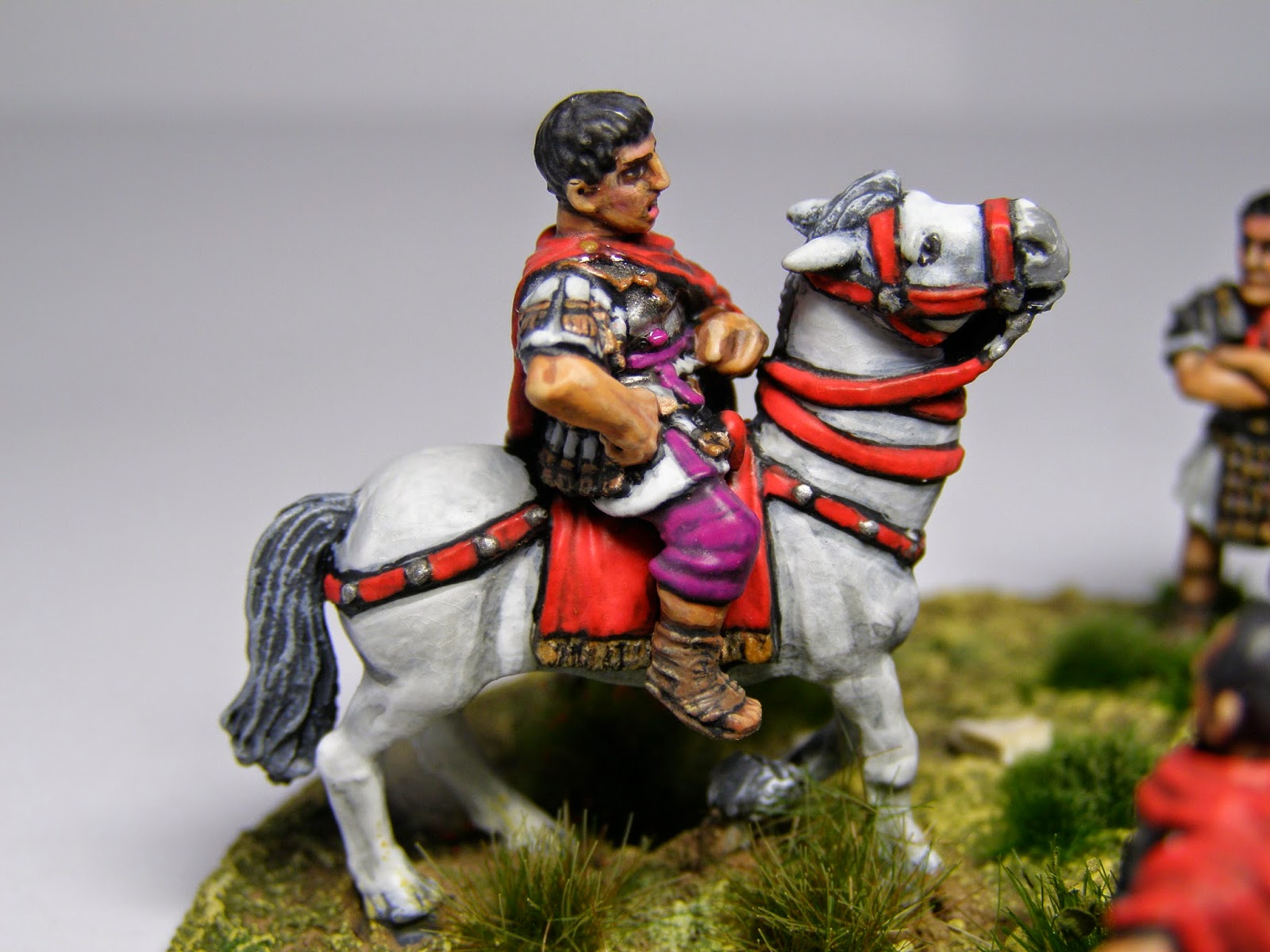 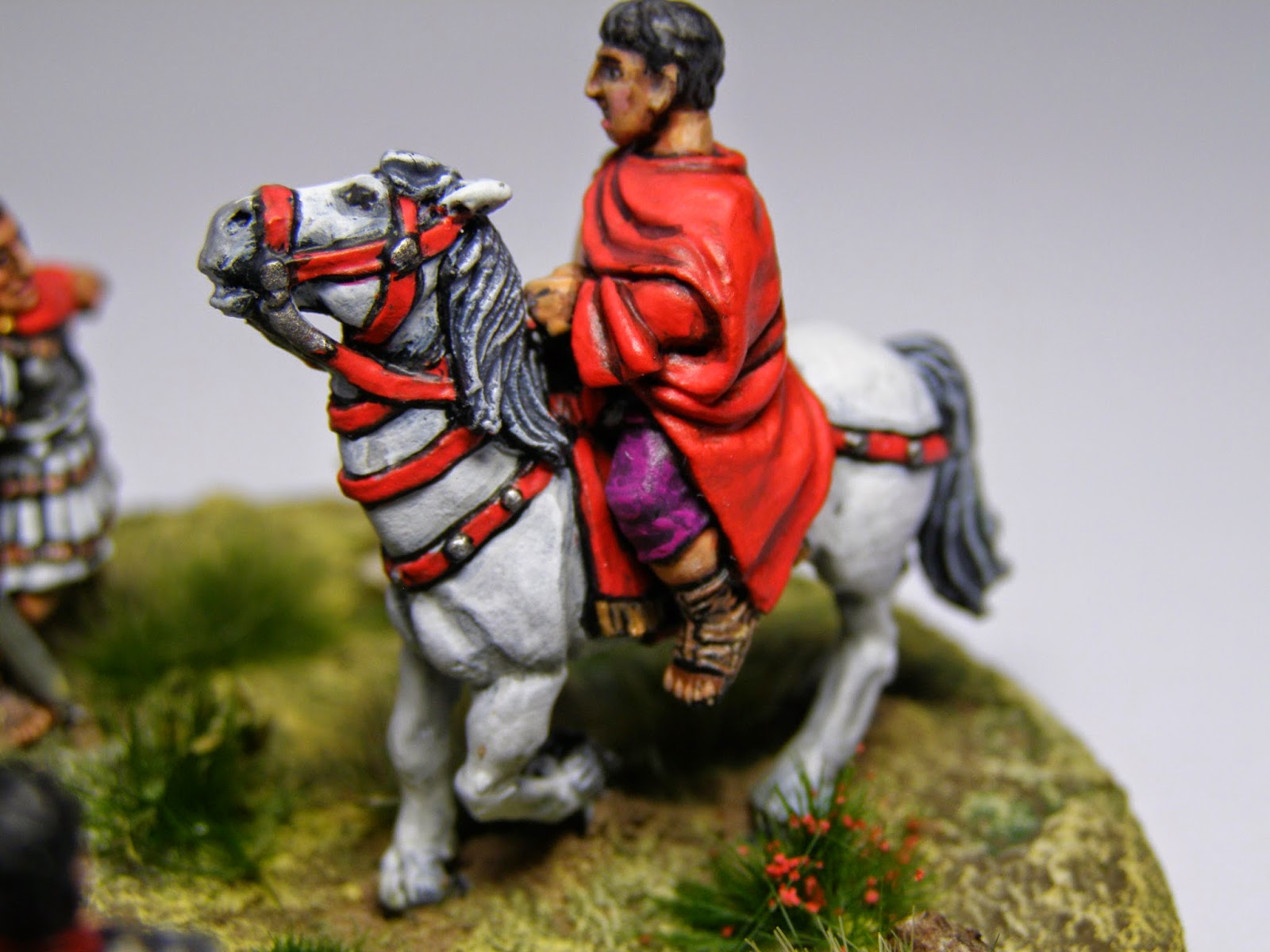 Inspired by painting this command stand, I have painted a few others in the last few weeks, all of them being a lot of fun to paint.    Painting time is going to be restricted by other commitments over the next couple of months, however I have saved pics of the other completed projects which I will post up as time allows.
Posted by Jason at 23:24 16 comments: