It's something we have all done, it's not as if we haven't got enough of a lead or plastic mountain to spend our time painting instead.  But for whatever reason, be it new rules, a general re-fresh or re-organisation, we find ourselves levering figures off of bases and then putting them on new bases. Then applying our re-basing texture, plants etc of choice and then remembering to put magnetic sheet beneath each base. It's a MONSTER of a job! 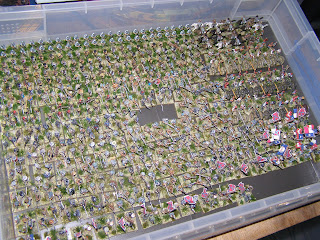 I guess I'm writing this mostly in justification.  I'm just about to re-do an army I only re-based about 2 years ago...and I want to remind myself of all the reasons why I'm doing it and set it to paper (so to speak), so I don't continually beat myself up and ask myself 'why?' when I properly start the process. 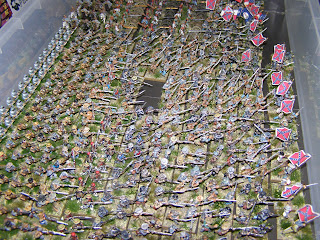 Well, this fine 15mm Confederate army with their beautiful GMB flags were re-based and re-flagged only about 2 years ago. This replaced all of the card and messy scatter-flocked bases which were horribly warped.  Some of the flags had been made by early dot-printers and picked up at shows in the early 1990's.  The basing must have been done about then as I had picked up Fire & Fury rules and I was obsessed with them for about the next 10 years. Rules which were actually fun and looked amazing (unlike the poor photocopied and horrendously complex rules being produced in the UK at the time).

Two years ago I decided to re-base them. I used MDF bases cut to the standard 1" x 1" and used the highly expensive railway flora stuck on.  Great I thought....Except it wasn't. 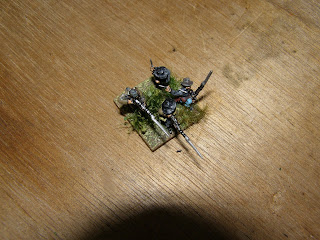 For some reason I couldn't get the motivation to re-base my Union Army afterwards. In fact I couldn't get the motivation to get my Confederates out of their box.  I did do for one great game...once.  But after this in the box they stayed.   I couldn't work out why my playing mojo for them had gone.  It was only recently when re-basing my vintage Minifigs Napoleonics (previous post) a couple of months ago that the reason became clear....I just hated handling the newly based figures.  It was so hard to get them out of the box, but also just to move them on the battlefield without bending bayonets and flags. It was easier to handle them by grasping the rear left and right figure which is never good.  I guess it was less important when the old bases were card as they were lighter (and actually were accidentally cut a little larger than 1" x 1").  With the weight of the new MDF bases with sand/acrylic texture and shrubs, bayonets bent like bananas. 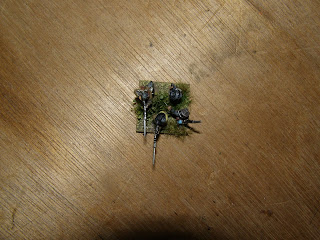 The problem is immediately apparent with these photos.  I just tried to put these stands back in the box with their comrades. I had to stop - bayonets all over the place which were in dire danger of breaking. 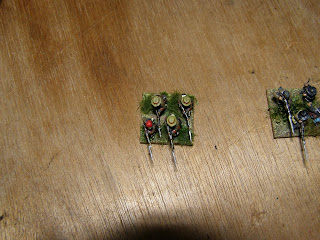 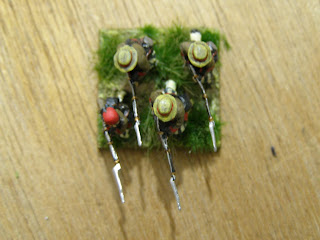 I also realised that I really didn't like the Fire and Fury basing for the artillery too.  It looks so unnatural and like a marker than a model.  Very unrealistic crew positions.  I know in the F & F scenarios, units need to be jemmied in to get everything on to the board (at least in my experience) so I was loathe to make the bases bigger.  However, when the aesthetic offends the eye so much that you realise you don't want to get them out, then you know you have to do something. 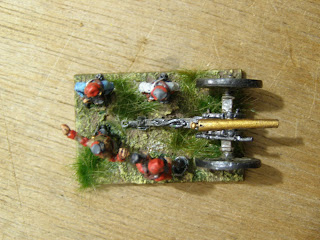 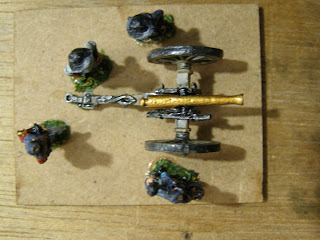 The new base is 5 cm x 4 cm.  It is just 0.5 cm longer and 1.5 cm wider and yet - look at the crew - they can work their gun!  It will look much better when properly base textured and plants and grass applied but the slightly larger base gives a much better aesthetic. 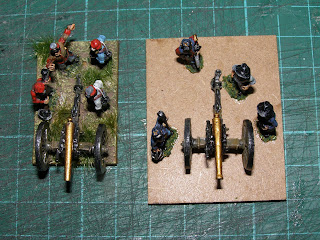 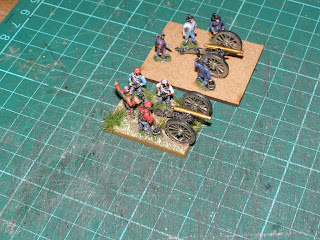 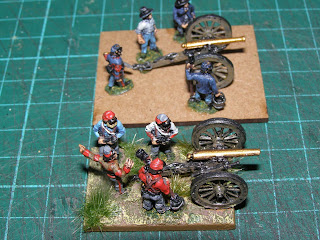 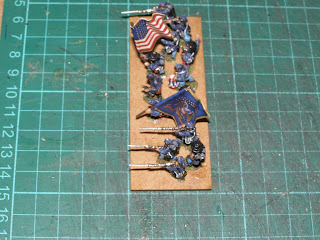 So now we come to the Infantry.  I decided to make bases into single bases containing what would have been 3 bases previously.  I also widened the base and have made it deeper.  This protects most of the bayonets leaving only a fraction to 'over hang' where unavoidable. Handling is much easier without it seeming like one is picking up a tiny hedgehog of protruding bayonets and ramrods. 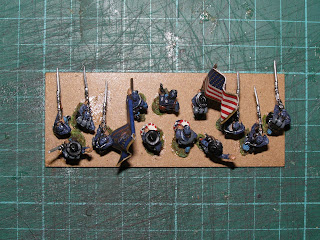 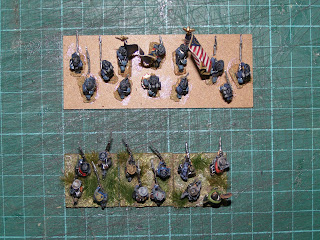 My new single base has a larger footprint in width but as the bayonets now have basing depth to protect them, the depth makes little difference.  Previously exposed bayonets sticking out would have increased the base depth in reality.

I used the figures from 3 bases for my new single base.  It is rare to require less than 3 bases in Fire and Fury.  I can call this new base a triple base or if stuck for game size which is suffering because I have given greater width to my bases then I will merely call it a 4-base.  I will be very flexible with my naming conventions.  To be honest, I don't intend removing bases when playing F & F, my standard casualty markers will keep track....and I'm sure in real battle when lead is flying and smoke is filling the air it would be impossible to tell whether it was a 900 man battalion or a 700 man battalion facing you across the valley and so I don't intend counting bases to keep track. A label will suffice to show starting strengths.

Another factor which makes my sticking to F & F basing conventions a little superfluous is that I tend to use Black Powder for ACW these days - though I would like the option of playing F & F if I feel like it.  I feel I can now do both with my figures protected and looking much better.

It should also speed up the game - I dislike moving little single bases when I can move larger ones.  Some might ask why I don't just use movement trays - yes it would simplify things - but I just don't like the figures standing 6mm or so above the terrain as if they were all on a giant surfboard.  It's just an aesthetic thing and we all have our personal tastes.  I've tried movement trays and I am just not fond of them at all. 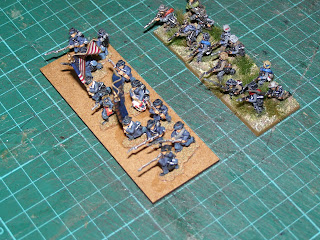 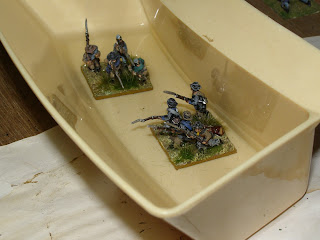 One potential problem was how to remove the figures that I had previously completed with basing texture of sand and acrylic paint. This stuff sets like concrete.  The Confederates above are standing in water.  After 30 minutes the bases are soft to the modelling blade.  I had feared that I would have to drill them out with my Dremel tool. A gentle scraping and lifting will undo all my previous hard work, but will result in figures being rebased in a far better fashion which also protects them more and makes them more playable to my mind. 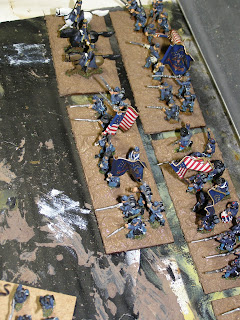 Above is work in progress - the first texturing of the Union army.  Below how they look on my new larger MDF bases. 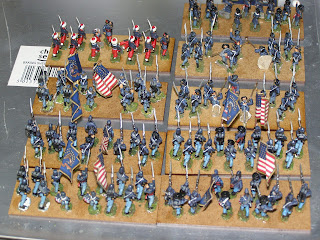 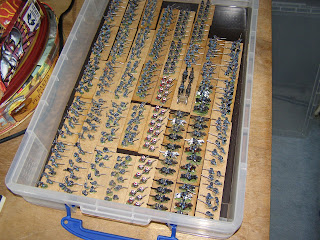 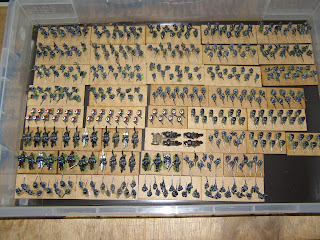 Well, if you have maintained interest so far then I congratulate you! You must have faced similar problems before and were curious to know how I dealt with my dilemma. It is something that has occupied my mind for weeks if not months now.  I think we like these little challenges and dilemmas as a deviation from daily life.  Ultimately, I can now look back on my blog in the coming weeks and say - 'THIS is why I'm putting myself through re-basing well over a thousand figures! Stick with it!'
Posted by Jason at 18:53 8 comments: