Please excuse the long absence. Much has gone on of late and a new weekend job has bitten into my blogging time somewhat.  The upside of this is that I will have more pennies to spend on metal shiny bits so it's not all bad!

I have managed to get a game in...well actually two. Both Franco-Prussian War.  The first game was with an old favourite set 'They Died for Glory or 'TDFG'.  I loved this set from when they first game out.  A period specific set which played very easily and always gave a quick game.  These were a breath of fresh air in the early 90's and were another example of beautiful glossy well illustrated American rules which looked fun and interesting (like 'Fire and Fury')...as opposed to UK produced rules which were often poorly printed from someone's typewritten sheets (or so they appeared!)  with few illustrations. 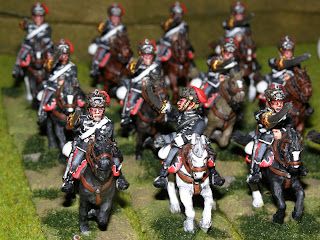 I had only played these rules about once in the last 10 years though, and that was with a novice and therefore  gave a cautious but fun game, easy from my point of view because of the simple game mechanics.  I arranged a wargames evening with my regular opponent Ian recently and I decided it would be fun to get the old favourite 'TDFG' rules out again. 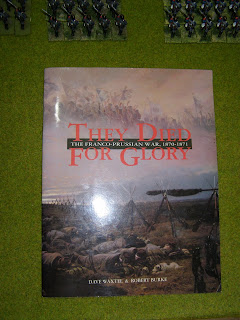 The rules 'TDFG' (less of a mouthful!)

Ian played Prussian and went straight onto the attack against my 'position magnifique'.  It was great to see the figures bounding into action. Assault columns charging headlong as they so frequently did in those summer days of 1870.  For anyone not familiar with TDFG, a unit can do two actions, move twice, shoot twice, move and shoot (or shoot and move in French case). Hence in the pics you will see my custom made '1' and '2' markers to show which units are at what stage.  There is a set sequence of 17 stages per turn for both sides to go through for the turn to be complete. 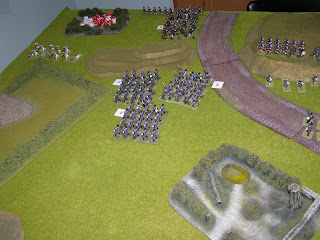 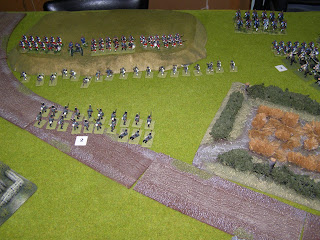 The Prussians on the attack

Melee between opposing heavy cavalry means throwing 1 x d6 per figure in the combat. 4 - 6 on a d6 is required for a kill.  +1 of they charged in.  This means that it is likely that if you have win a heavy cavalry combat you will be lucky to come away with many men left.

Morale is a simple case of falling back on 50 per cent casualties. 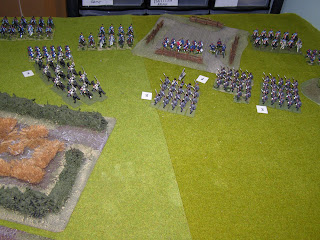 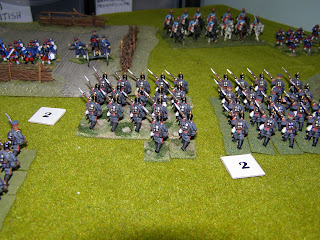 If you play the basic rules then no orders are required to make any moves, you can just do whatever you wish and your troops will obey.  There is a written order option for in the optional rule section which until this game I never even thought of it being necessary. 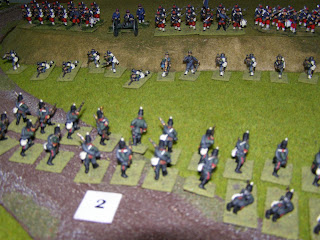 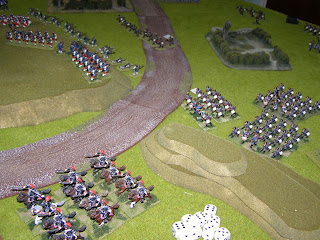 Hussars charging into a wild attack

So we have established that movement is easy to do, firing is deadly, melee is deadly..artillery is....really deadly...long ago I removed the shell option and kept the shot only as that was sufficiently nuclear tipped! 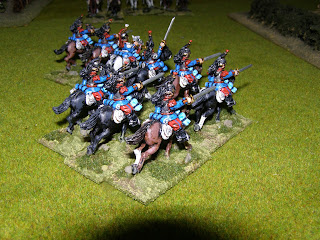 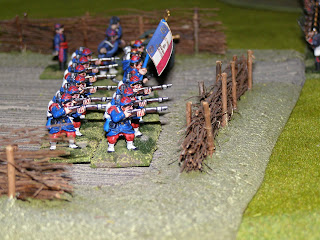 French Infantry about to wipe something out with one volley 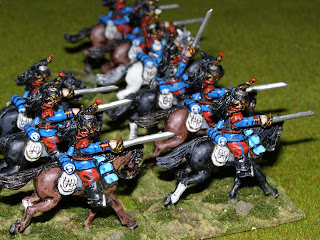 Ian charged in a very General Steinmetz manner - straight in hard, using the Prussian aggressive tactics of the time.  The rules really make the French act on the defensive all the time.  Why move when you can shoot twice?  Also the rules make the French shoot first then move.  If they close enough to shoot then there is little point moving. Might as well stick another volley down and remove the threat. If the French dare move they are going to get charged or shot down. 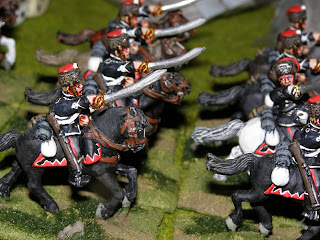 More detail of the Prussian Hussars 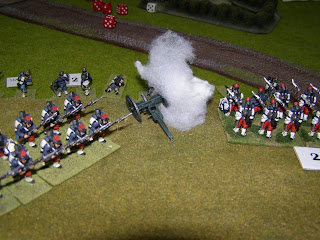 The French lost a gun to Krupp fire. With Quick moving Prussian Hussars coming from the rear, I merely about turned a battalion swung it like a hinge and in the next turn gave a lethal double volley. Not a morale check in sight, just a care-free gallic shrug and opened fire. 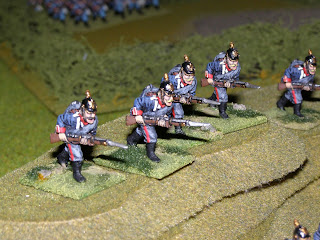 Prussian Grenadiers having cleared a hill

The game was effectively over in the first turn in blaze of Chassepot fire cutting down Prussians by the score.  The second turn was mopping up the remaining Prussians.

So why was this game so different to the many I played before?  It wasn't unrealistic..for sure the shell firing guns were deadly and the aggressive Prussian columns were shot down in minutes when they assaulted strong French positions. This is historical fact and the rules worked in this respect.  Ian reminded me that the rules were designed for 15mm figures and therefore you could get several divisions playing on each side rather than the three brigades each which I had.  This would absorb losses more easily.  You just need to keep more battalions behind the first, as brigade morale is not affected by unit losses.  Cavalry are one-shot weapons in these rules. You unleash them and then they are gone.  Again quite realistic when charging against breechloading rifle armed infantry.

I have always really liked the rules but some things just jarred a bit this time. I think the experience I have gained in the last 10 years of using different rules (since playing an experienced opponent with TDFG), has given me more of an insight into what works for me.  In some ways a game playing exactly how it might in history might not be as satisfactory as one hopes.  The rules did punish aggressive charges after all, so TDFG does give many realistic outcomes.  I agree that with lots of 15mm figures and reduced ranges a better game would result.

I also think I like rules to have an aspect of orders and failures in those orders being always possible (this would reflect the French Command in the Franco Prussian War quite nicely) and prevent units doing what you want them to do all the time (sometimes the opposite!).  I would also like the French to display some initiative and make some local counter-attacks - as they were capable of doing without it being a certainty that they are going to get wiped out everytime for entering melee with Prussians.  If a certain initiative throw could be made then shouts of 'En Avant!' could ring out and Turcos could give the Prussians a hard time. The fire doesn't have to be quite so deadly, as I would like a game to go a few turns at least (but not several days!).

So in a nutshell, can command and control be incorporated better? Can an army be encouraged to maintain Brigade cohesion rather than allow units to move in a firework display pattern if they so wish? Can initiative be used by a defender? Can firing and melee be tweaked to make it more fun and not quite so devastating?  Can morale rules be a little more sophisticated by having scales of failed tests?). It looked like a major re-write to me.  The decision was made to use a different set of rules for the next game.....hopefully you won't have to wait a month for me to write this battle up!
Posted by Jason at 18:08 3 comments:

It happened! A change of painting period. It took a year but I finally switched away from English Civil War.  The reason was a desire to build up my old Norman/Anglo-Saxon armies into something playable.  With this in mind I bought a box of Conquest Games excellent plastic 28mm figures. 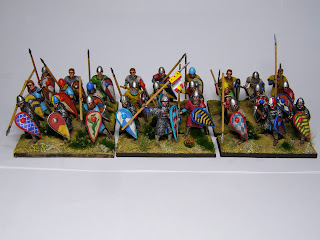 Please excuse the lack of painted in 'border' around the edge of the base on the left hand stand.  It's amazing what errors and omissions  posting pics up on here show! 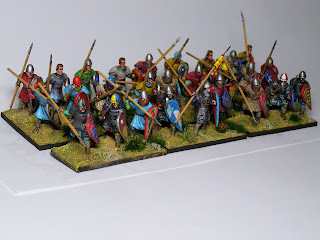 The figures are a joy to assemble and give quite a large variety of poses.  The arms attach to the torso at about elbow height  so there are some figures which look wrong with certain arms, however a dry run before glueing will prevent completely bizarre figures from being created. 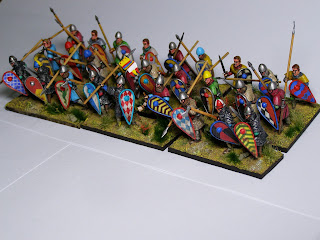 The weapons are cast in the hand which is such a great idea.  This means no fiddly weapons to try to fix into unwilling hands.  Likewise shields are already cast onto arms so no shields popping off over the wargames table when units are moved. 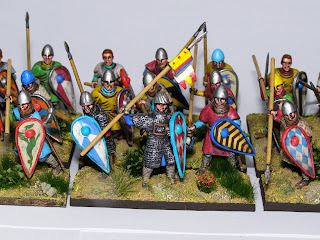 There are a number of figures who are well clad in chainmail hauberk.  There are others in padded fabric hauberks which I find a bit tricky to paint.  I find it hard to decide whether the dirt would settle between the fabric 'pillows' along the stitching or would dirt be found on the tops of the padding, leaving the stitching relatively clean (as per an excellent artwork piece in the Osprey 'Hastings' campaign book). I have gone for a mix of the two dirt painting styles. 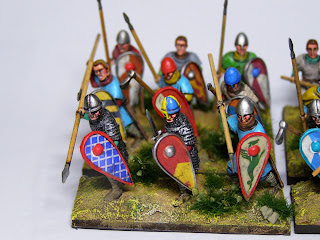 The un-helmeted figures all have the usual portrayed Norman hairstyle of being shaved bald up the back of the head. 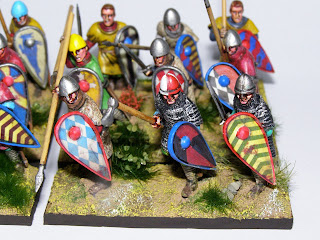 Shield transfers don't come in the box so I ordered a set from 'Battleflag' who make them specifically to fit the Conquest Normans.  I have to say that these were probably the easiest to fit shield transfers that I have ever had to put on and I think that they really look the business. Blood, dirt and damage is already printed onto the shield design. 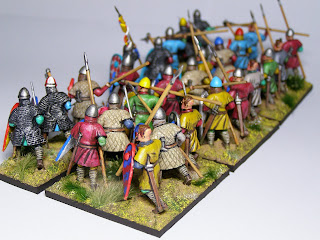 I started my Hastings armies in the mid-90's with Old Glory then Gripping Beast figures.  I never managed to get enough for a game which was a shame.  I decided to re-vamp my Hastings armies in much the same way as I did for my English Civil War armies.  Figures would be re-based from single stands on card onto MDF in decent groups.  This suits me well as large battles appeal to me more than skirmish games, so basing in groups gives me all the convenience I want. 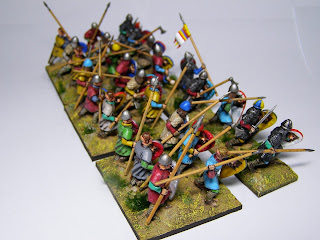 I have moved away from using static grass (or non-static grass as my last purchase of the stuff appeared to be!).  Instead I will use larger glue-on grass clumps of various types and try to obtain a more wild look to the bases rather than the tennis court extracts that static grass seems to give me. More clumps of Autumn grass may be added to give a slightly more October look to these bases.

Re-commencing my Hastings armies appears to be remarkably well-timed seeing as they are so well catered for in plastic now.  The Gripping Beast Dark Age Infantry box is going to be so useful (perfect timing!).  The only difficulty I have now is in trying to stick with this period for a while since I have just purchased 'Spearhead' rules for WW2 and I'm also trying out 'Black Powder' for Franco Prussian War this week!
Posted by Jason at 01:28 7 comments: