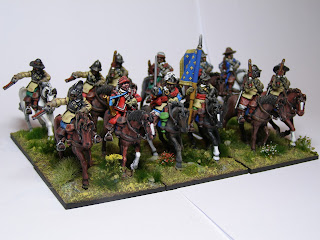 Another unit of horse comes thundering on to my blog! This time it's the Queen's Regiment of Horse, another famed regiment from the English Civil War. 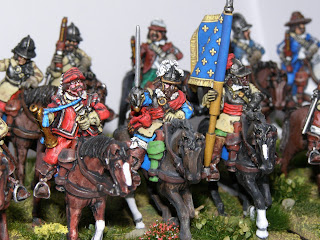 This regiment was formed in early 1643 when Queen Henrietta Maria returned from the continent having pawned the Crown Jewels for arms.  Arms and munitions for 10,000 men came back with her, along with many French volunteers.  As the Queen passed through the North of England, many volunteers joined her and new units were formed. The Queen's Regiment of Horse being one of them.  Many of the French volunteers thought this a suitably attractive regiment for them to join also.  The Colonel's colour is appropriately adorned with the Fleur de Lys. 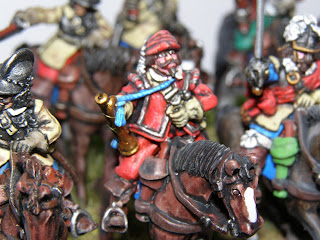 The regiment was well manned with volunteers and was one of the larger regiments of Cavaliers, maintaining a good 7 troops of horse even into late 1644. The regiment fought at many of the famous battles including First Newbury and Second Newbury, Lostwithiel, Cheriton and Naseby.  Though before Naseby the regiment had declined in numbers to about 150 men (source: R.Giglio, www.ecwsa.org/histqueenslifeguardofhorse.html). 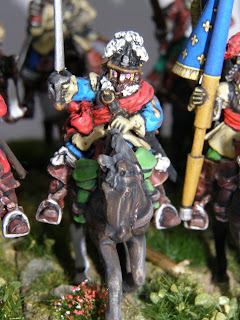 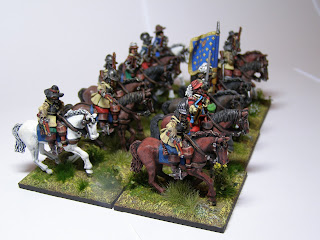 Because of the original large size of this Regiment, I formed two wargaming units for this regiment, thus each unit equates to about 3 troops at a scale of 1:20. Each of my units has got one flag, in this case the Colonel's colour for these 3 troops. It looks pleasing to the eye and seems to work, although in reality each troop of 60-70 men would have a flag each.  The second unit will be posted up soon, this unit will have a Captain's colour.  For Naseby and beyond I will just give one unit a different command stand and turn one half of the Regiment into a different unit. 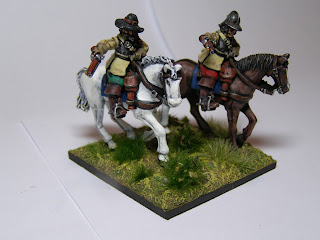 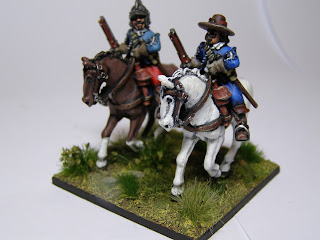 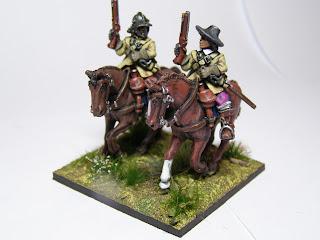 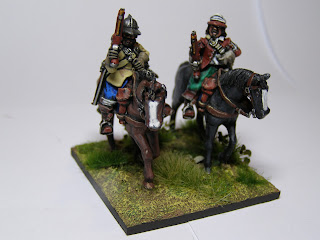 I painted up most of this regiment about 10 years ago.  It orginally consisted of random different bags of Bicorne figures as I just wanted to paint each set up to see what they looked like.  As I bought more figures and produced 'proper' formed regiments, I was left with a unit of odds and sods of a slightly over-strength nature. I hadn't bothered to form them into a proper unit because of the lack of suitable rules for so many years (you know how it is, you buy a new set and play test them...but your are convinced sometimes that it's just your lack of experience with them when they don't play well...so you persist for years and then realise about a decade later that the rules were cack all along!).  Anyway with 'Pike and Shotte' turning out to be superb, this has given me the incentive...so these cavalrymen are odds and sods no more.  I have painted the command stands this month, freshly based them and given them the excellent flags by GMB.  This over-strength unit now holds its proper place in my Royalist army. 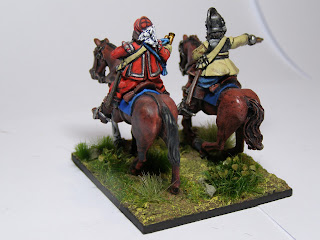 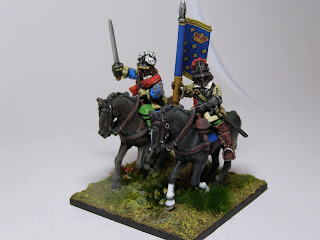 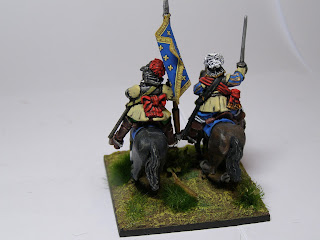 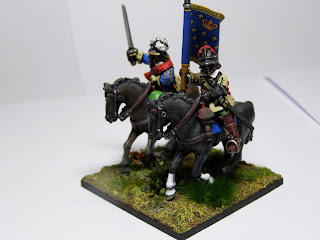 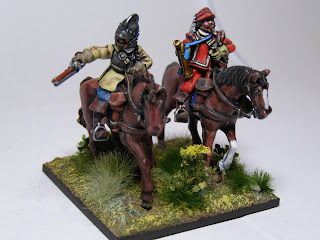 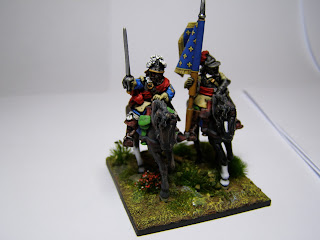 Pay day being yesterday, I have already placed another order to Bicorne Miniatures.  This time for more personalities.  It's quite fun doing research on historical commanders to decide what 'Command Rating' they should be given. Several extended lunchtimes at work this week have been spent on Wiki and such-like!
Posted by Jason at 23:10 17 comments:

I had one of those 'how on earth did I manage before' moments last week.  After a winter of realising that I cannot mix decent basing shades of colour under the glowing eco-bulbs, I finally did what most of you seem to have already done.  I bought a daylight lamp. 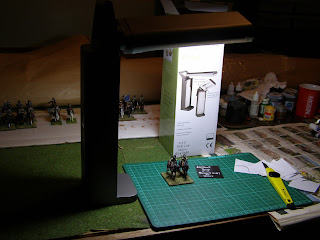 I have been meaning to do something about the lighting for a while. I did buy a daylight bulb to go into the main light, but I found that because it was on a dimmer switch, the bulb box said it was unsuitable....so back to the drawing board.  I held off for a little while longer and tried to make do...until the frustration of opening the curtains in the morning again revealed that the paint shade I thought was pretty good in the evening eco-bulb glow, actually looked terrible and was way off when viewed in the cold light of day.

I had some reasons for procrastinating.  Way back in 1991 I became short-sighted very suddenly and quite dramatically over about 6 months.  I was painting ACW figures in my barrack room, perched over an MFO box with a standard 60watt fluorescent bulb not far from my face as I painted.  When I discovered that I could no longer spot officers pips (on the real thing - not on the figures!), I realised my eyesight was not what it should be.  The only thing I could put it down to was using that fluorescent bulb in the lamp.  Glasses have been worn every since (unless i'm wearing contact lenses of course...or sleeping etc!).  I still don't know what the actual cause of my sudden short-sightedness was, but it was probably natural.

Another reason for not getting a daylight lamp was my fear that I might become too obsessed with detail.  If I can see the figure so much more clearly I would surely become tempted to paint more and more detail until a regiment would take a year to paint.

Well, despite these fears I read some reviews and and with an idea of what I needed, I made a purchase...and my goodness...I should have done it years ago! 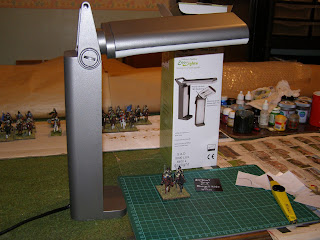 This is going to sound like advertising blurb, and really, I have no vested interest in this but as soon as I set it up and turned the light on I was amazed at how clearly I could see.  It really is as good as people say they are.  I can't believe that I coped for so many years without one. How did I ever see in the evenings to paint any kind of detail? 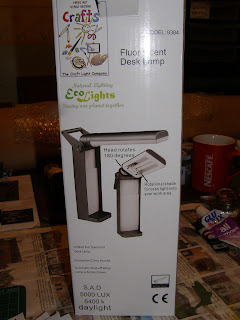 I immediately set about black lining in and touching up a cavalry regiment. All of my original fears were unfounded.  My eyes felt more relaxed using this light, and I although I could see the figures clearly, I found that I wasn't spending time obsessing over detail.  What I did find was that was spending less time painting because I could actually see what I was doing properly and not making mistakes! :-) 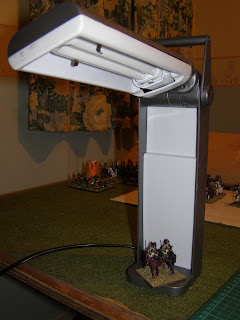 A final shot above for scale with figures.  No doubt for those of you who already own a daylight lamp, everything about how good it is will be so obvious.  I am just amazed at how good it is and how useful it is going to be. This is probably the best £40 I have ever spent.

Anyway, I felt I had to share that...just in case anyone had any doubts about getting one.  Normal blog postings will resume... :-)
Posted by Jason at 00:39 13 comments:

Earl of Essex's Regiment of Foote 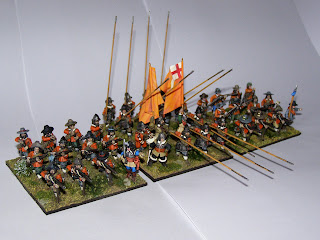 The Earl of Essex's Regiment are now ready for action.  I originally painted the majority of this regiment somewhere in the mid-90's.  Like my other units created at that time, most of the figures were based on card single stands, flocked badly and with just one officer in the whole unit besides an Ensign.  I have recently spent a little while re-vamping these chaps and adding to their number to bring them up to my standard 40- strong Regiment. 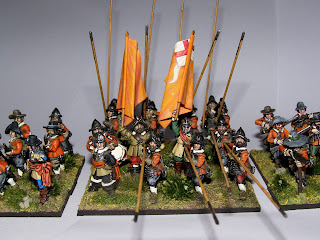 The regiment consists mostly of Wargames Foundry figures, but I filled in the gaps with Perry Miniatures.  The Perry Miniatures are really nice figures and don't fit too badly with the Foundry troops.  The Perry's are slightly taller, and a little bit of trickery was involved to make them fit better.  Basically the Foundry figures were glued to the MDF base on their original card stands. This adds a millimetre or so and brings their height up to the Perry height.  The comparison can be seen best with the musket officers who are Perry's alongside their Foundry subordinates. 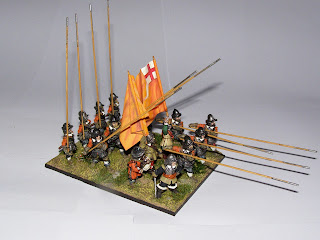 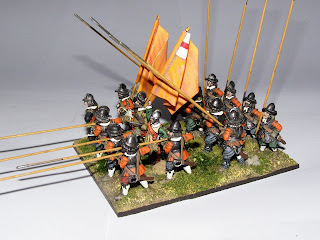 The flags are GMB and look far nicer than the original single flag I had before for this regiment.  I think I used to have a Revo flag on there.  I had a little mishap when I sprayed the Matt Varnish over the flag and it started to turn white.  Some repainting was required but the colour matches were very close so I think I got away with it.  I haven't used cords with the flag finials. I don't think cords were used on English flags during this period (but I am happy to be corrected on this as I think they make flags look nicer!).  The cords would also make swirling flourishes of the flag by the Ensign, make the Colours look like giant swirling nipple tassles at a Burlesque show (I would imagine!). This probably wouldn't please a Puritan commander either! :-) 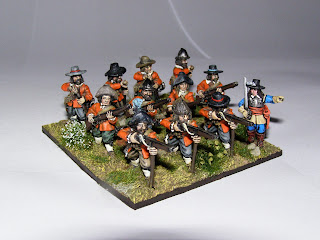 There is a lot I like about this Regiment and the Foundry troops are still pleasing after all these years.  I did spend some time deciding whether to retire my Foundry units and replace them with Bicorne/Renegade, but to be honest I think variety looks really good on a game board as long as the extremes are not too jarring on the eye.  I think by increasing the height of the Foundry figures on the base, it allowed them to blend in quite nicely. 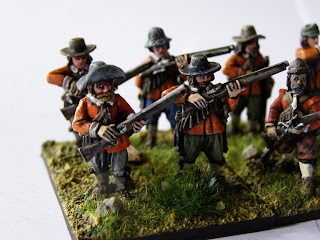 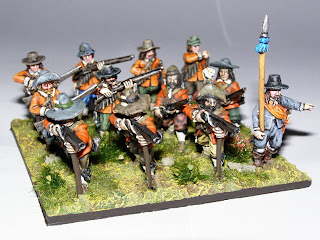 Another Perry officer with musketeers 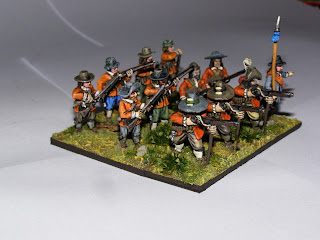 A different view showing combination of Perry's and Foundry

I think in retrospect that I could have toned down the orange coats a little, but they look very attractive on the table and add colour wonderfully.  I have a number of old Foundry regiments to re-vamp but I'm completing some cavalry and dragoons at the moment.  I aim to start creating some command stands which I am desperate to do, as they play an important part in 'Pike and Shotte'.  I also really like command vignettes too.

Christmas was a really busy time for me and I didn't make it on-line to make a posting to wish everyone a Happy Christmas and Happy New Year, but looking at your posts it seems like everyone had a fabulous Christmas with many wargaming goodies! I received two excellent books on the ECW ;'To Walk in the Dark' Military Intelligence during the ECW, and 'Cromwell hath the honour but...' about Maj-Gen Lambert's campaigns in 1648.  I bought myself a copy of Warlord Games 'Triumph of Albion' which could just kick-start my barely started Peninsular War armies. I love Napoleonics but painting them is so time consuming...all that lace!

I'd also like to take the opportunity to thank MiniMike for becoming the 50th follower of this blog today, and  also I'd like to thank you all for the inspiration your posts give to me and for pushing my enthusiasm ever onwards.