Another batch of Confederate commanders have been painted up this week. 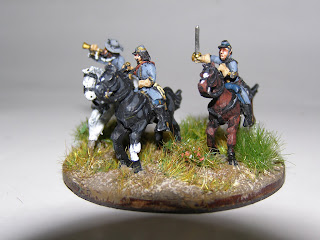 Above and Below: Major General George Pickett, Bugler and Staff Officer 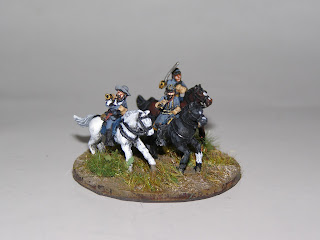 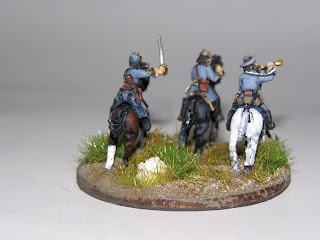 All of the figures are from Blue Moon.  There is lots of detail on them to paint. One difficulty is making one self stop and not keep going back to improve details further. 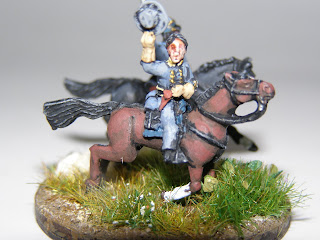 Above and Below:  Brigadier General Barksdale.  Not actually included in the Confederate Personalities set, this officer was in the Mounted Generals set, and reminded me of the paintings of Barksdale encouraging his men from horseback 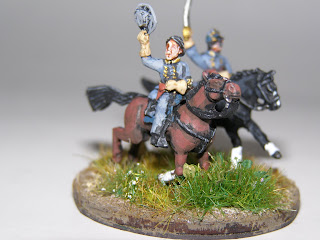 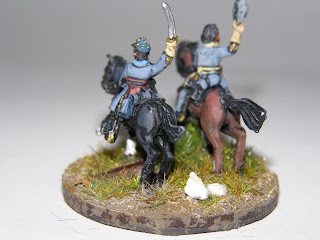 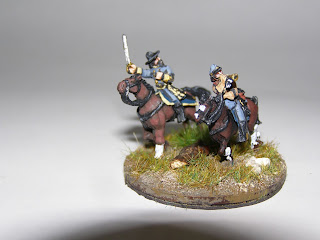 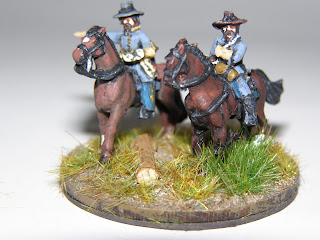 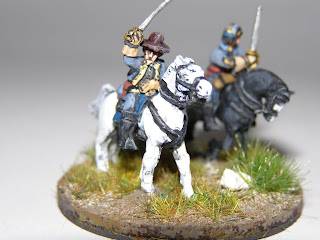 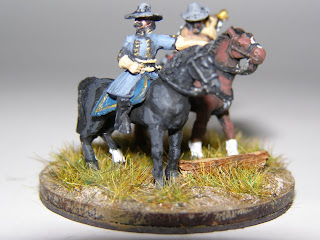 I was working on three wargaming projects at the same time this week, this is normally a recipe to get nowhere at all!  However, all have made great progress.  I'm waiting on another order to arrive before I can finish one of them.  More will be revealed. 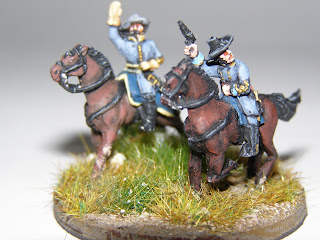 I have just one crazy purchase this week.  I was inspired by the brilliant 'Little Wars TV'  You Tube channel and their episode on Antietam.  Their game looked great fun.  It looked amazing to play an entire large battle on a table and the game was very closely fought.  So I have ordered their rules called 'Altar of Freedom' designed by Greg Wagman.  The craziest thing is that now I have got my 15mm ACW armies to that really playable stage (after over 25 years of  non-continuous effort!),  will probably require a 6mm or even 3mm army to get the troops all on the board! 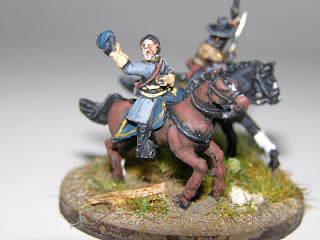 Ah well, I shall stick with my trusted 15mm figures for those slightly smaller actions and different rules like Fire and Fury as well as Black Powder.  I'm not getting rid of these15mm figures after so much effort!
Posted by Jason at 19:50 20 comments:

Here we have Confederate commanders ready to lead my large rebel army!   I started my Civil War collection in the early 1990's when I first obtained the excellent 'Fire and Fury' Rules.  Rapid painting followed and a large army of Union and Confederate troops made their way through my painting table and on to the board. 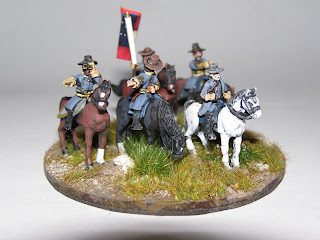 Over the years since, I have added bits as necessary, but I have never really liked the very small command stands that Fire and Fury required.  At long last I'm now getting the stands organised to follow the larger bases that other armies in my collections have.  Above and below we have the commander of the Army of North Virginia, General Robert E Lee himself. 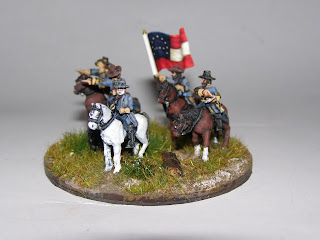 The figures are almost all all from the Blue Moon range. These are gorgeous figures, though the horses do come with a little more flash than I would like and this all needs very time consuming trimming off.. 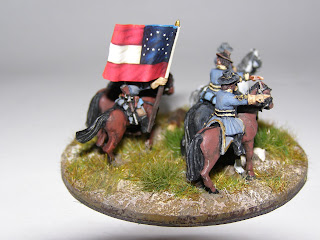 Other figures in these photos are from the Old Glory range. 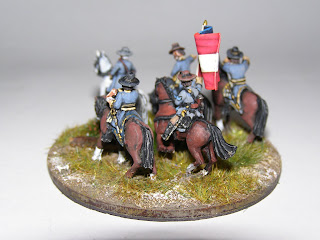 The flags are from GMB, who produce very fine flags indeed. 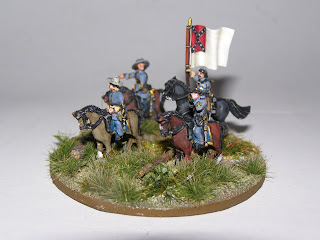 Above and below is a Corps Commander. This is one of the few who will be un-named and will stand in for Corps Commander's who I don't have a personality figure for. He is also smooth-shaven so is probably going to be representative of very few actual Corps Commanders on the Confederate side! 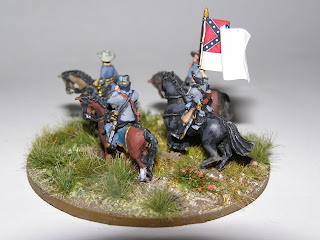 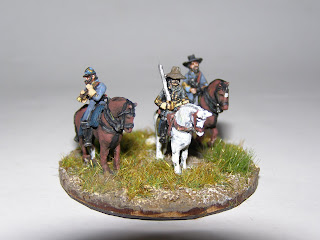 I have used the very nice Foundry paints for most of the uniform colours, their Confederate Grey has a hint of blue which looks very nice in a fine officer's coat.  I have tried to mix a few shades of grey in for interest. 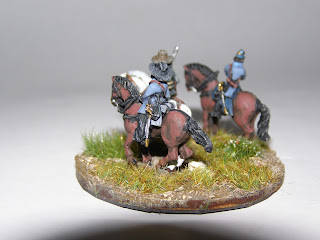 I've used the same 'at a glance' system of command levels as my Union army.  The number of  figures
on the base indicate command level.  2 Figures are Brigade command, 3 Figures, are Division, 4 figures are Corps and 5 figures are Army command. 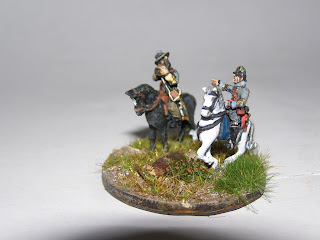 The above and below Brigade commanders are from Old Glory. 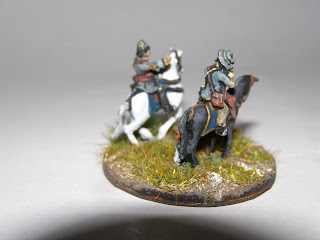 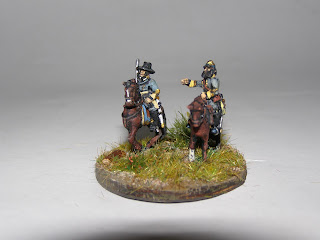 I have included a cavalry officer as the accompanying officer with this Brigade General. It was fun to get the yellow paint out. 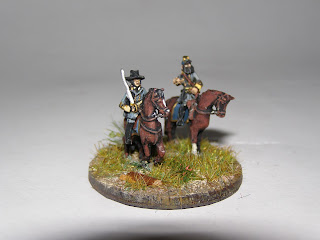 Bases are MDF from Warbases. I have cut out and attached 'rubberised' self adhesive 3M metallic sheet beneath the bases to keep them from moving around in their plastic storage boxes.
Basing texture is made from sand, water and brown acrylic paint and allowed to dry.  Three highlight shades are applied and cat litter rocks, twigs for logs, and small (and expensive!) tufts applied.
Instead of only applying tufts over the bases, as I used to do (I stopped for reasons of economy and also for improving the visual effect), I now apply 3 different types of static grass over PVA glue patches.  This adds interest to the base and allows me to change grass tone to match an area of the world more effectively.
For most my armies I paint the edges of the bases, but for some reason I never have done with my ACW range and I quite like the way this helps to blend the bases into the playing mat.  The shaded wood might even add character to the base and takes the eye to the figures. 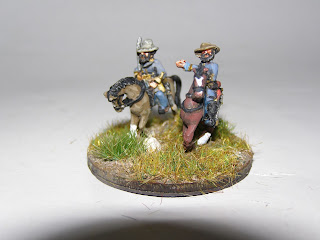 I am at the point of deciding what next to do.  Painting time has unfortunately had to reduce somewhat due to workload from the paying jobs,   I have some more Confederate commanders ready for undercoating but I am also expecting some 10mm Gauls to arrive soon to add more ancient armies to my 'To the Strongest' collection.