The Grass is Always Greener... 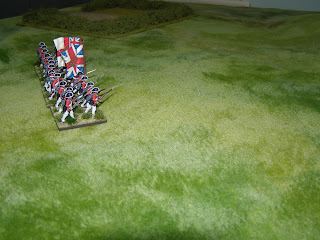 For a very long time, since the 1980s in fact, I have used those grass rolls of the sort Games Workshop sold.  On top of this I would duly place my terrain and most importantly, the two large polystyrene hills which seemed to focus in so many of my battles.

This sufficed for a very long time and I never really thought about the drawbacks until about 2 years ago when I started playing a lot more regular games.  Suddenly scenarios were having to be adapted to take account of my hills.

The solution became clear after some web-browsing.  A large fabric grass mat!  This would allow me to create hills of any shape and size and wow! some of these mats looked fantastic. 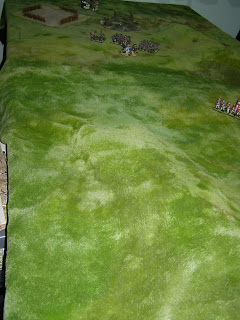 So it had to be done.  I debated it for a year, shopped around, looked about,became distracted by other things and then returned to the website where I first went 'WOW!' 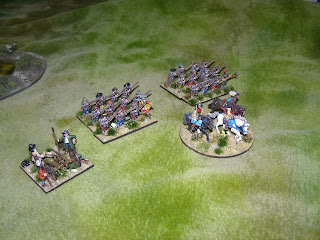 I purchased this Warmat from Barrage Miniatures in Spain.  I ordered the very handy duffle bag (and I would recommend getting the duffle bag as it keeps it very nicely tucked away and thus dust free!).

The link is here: http://www.barrageminiatures.com/en/12-warmats

Hopefully that link works!  I found ordering very straight forward, and I was very impressed by the continuous contact that Clara from Barrage Miniatues maintained with me to ascertain which scale of figures I wanted to use, which season the grass was to be and if I had any other special requirements.

I opted for a Spring/Summer for 28mm and wanted various shades and lengths to add interest.  Clara sent photos of the work at various stages until it was ready and informed me when it was being despatched. 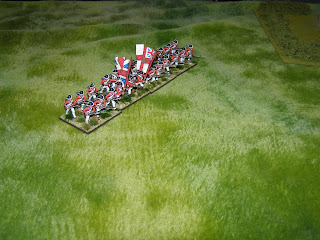 My photos probably haven't done justice to the mat, as I used various lights and flash photography in my usual amateurish way with cameras and lighting! 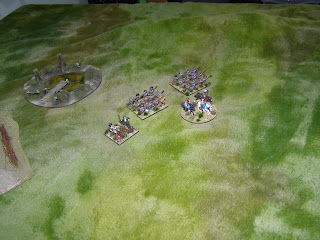 I purposely went for a larger mat than my table currently is.  This is with the ever-optimistic view that I might one day move house and get a bigger gaming room.  Having lived here at this address for 22 years now, it might not be happening soon, but who knows.  At least I have the option. 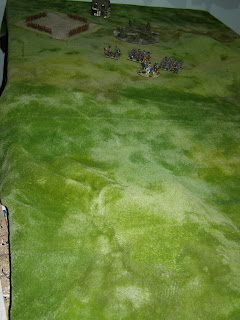 I note that the website also has a snow mat and a desert mat too.  Yes, they both do interest me, especially the desert mat, and after buying this grass mat I would happily buy another from them. 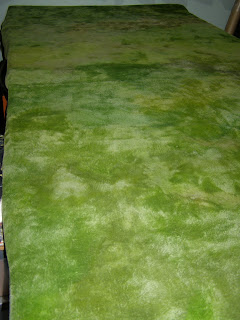 I consider this mat to be a worthwhile investment. Ok it wasn't cheap but then quality rarely is, like most things in life.  I don't have to buy any more polystyrene hills though - so that's a saving, an old jumper shaped beneath the mat and I have a wonderful piece of high ground. 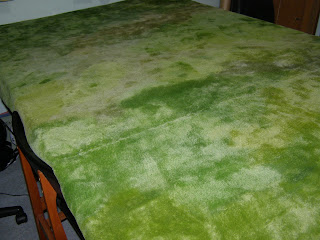 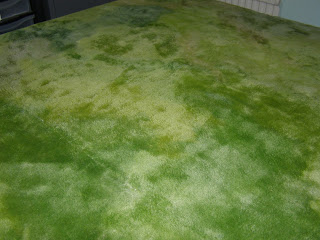 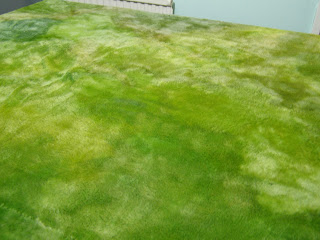 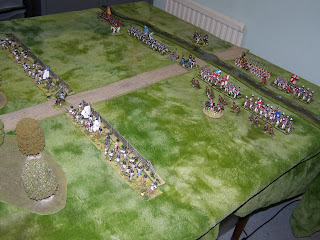 This weekend I had the great pleasure of a good friend staying the weekend and getting a whole weekend of wargaming.  Steve hadn't played a wargame before but had an interest in the Guilford Courthouse battle as well as an interest in the American War of Independence generally.

This made selecting the game we played an easy choice!  I opted for Black Powder as the rules of choice.  Perfect as the mechanics are straight-forward with the 'toolbox' to tailor it for period and battle.  The Warlord Games 'Rebellion' book was used to set the scenario, with all stats for units taken from there.

I originally started my AWI collection in 2007 or thereabouts and decided early on that I wanted to concentrate on the Southern campaign and Guilford Courthouse in particular.  Well, it had been a long wait but here I was - giving my painted AWI figures their first outing and playing the battle that I had always wanted to do  - a mere 8 years or so later! 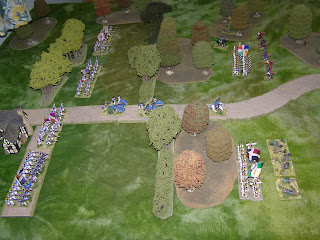 Unfortunately I didn't have quite enough painted units for a battle of this size.  Some stand-in units from the French Indian Wars and also Seven Years War had to play a cover role.  During the game setting up I spotted in the scenario book that the game should last a maximum of 24 turns.  I wondered how I missed this bit on my first readings!  I was thinking of playing two different game over the weekend but now it looked like this was going to be the only game.  This actually turned out to be a good thing as the game was superb.

During set-up it also became apparent that my 8 x 4 table was really going to make the set up tight, designed as it was for 8 x 6.  I was short of the cavalry anyway which saved some space but I also made the unit sizes smaller, reducing them from 24 to 18 men for standard units.  This enabled me to at least get the units on the board, which we would be fighting down rather than across. 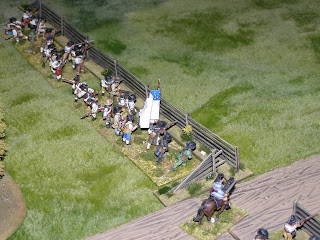 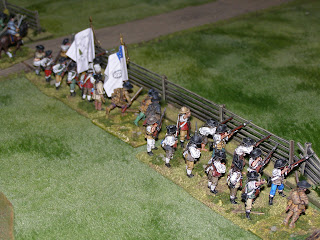 The North Carolina Regiments in Eaton and Butler's Brigades

Steve opted to take on Major General Nathanial Greene's role.  This meant I took on Cornwallis role commanding the British.  I was slightly worried that the wargame might become too static for a new wargamer's first game.  With three defensive lines awaiting a slow attack through woodland and no room for sweeping flank attacks, this was a genuine concern.  Thankfully Steve saw past all this and decided to make his defence flow combining fire and manoeuvre in steps and counter attacks.  This made the game very interesting for both of us. 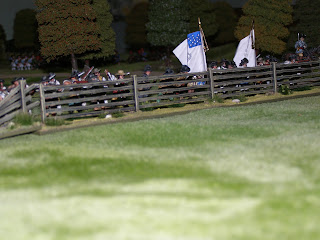 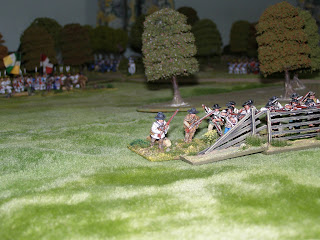 The British view of the first line at the fence line

The scenario writer made the British tough cookies to crack with a saving throw of 3+ on a D6.  This did make the erosion process slow and despite Steve's magnificent defence, Webster's Brigade did finally force back the 3rd line of  Continentals where the Virginia brigade were.   We did tweak some rules a little.  With a basic saving throw of 3+ it was always going to be hard to reduce troops down but with an extra save modifier of +1 of woods then removing anyone was going to be very hard indeed.  This latter +1 was dispensed with, we did want to complete the game on Sunday - and we did too...but only just! 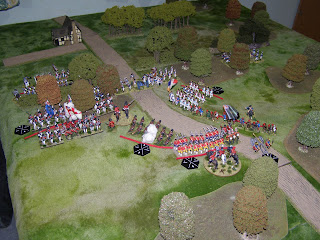 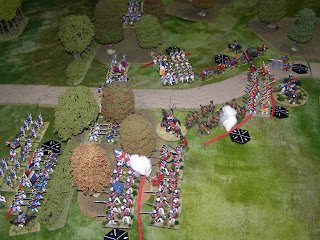 We ended on Game Turn 17.  I had failed to break the whole of the American 2nd Line, the remnants of which came across to flank Websters brigade.  Webster's 23rd Foot did a final bayonet charge which forced back the Virginians in the 3rd line but failed to break them.  The last troops of the American second line were 1 casualty from a break test (the red pipe cleaners show shaken brigades in the photos), and it was a close thing.  However, I could not break them and all of my units were becoming shaken.  The Maryland Continentals were marching to support their Virginian comrades and it was clear that for the British we were not going to advance any further and that it would all be break-tests for me from here on!  Cornwallis (me!) conceded defeat. 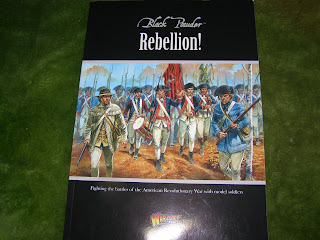 The excellent scenario book - well thought out and for me, worth the money even if I ever just played this one game with them (which I won't be - as I look forward to playing them all!)

I think we must have played for a good 12 hours in total.  We lost track of time completely, not realising it was 0130hrs on the Saturday night as we both contemplated our moves!  This is the sign of a great wargame (mind you, it might have had something to do with the excellent beer too!).  Steve seemed to enjoy his first wargame immensely, and of course winning might have helped!

Suitably inspired I feel ready to paint some more AWI troops up for next time.  I have a small mountain of troops to paint, yet I still found myself perusing the Perry's website for more today!