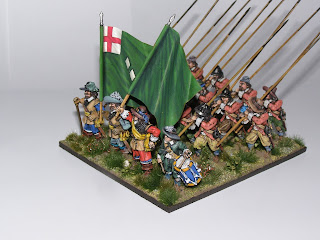 Here we have the finished pike block of Colonel Sir Robert Cooke's Regiment of Foote.  I completed the musketeers a couple of years ago and the pike received an undercoat at the time but were then put aside as other projects took my attention.  Having waited patiently for me, I have now returned to finish the job. 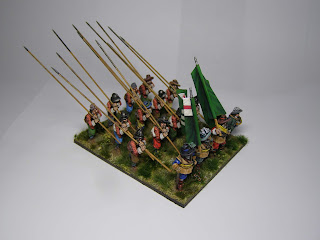 I find there is a limit to the number of 28mm figures that I can focus on to paint as a unit at the same time. The very maximum is 30 if they are straight forward (ie are covered head to foot in mail!).  I can do 24 figures if inspired, for instance if I am painting a really smart American Revolutionary War unit.  Otherwise 12 to 16 figures is about my limit.  I can then paint in a production line method, applying one colour at a time and doing that to each figure as I work down the lines of troops on my painting table. 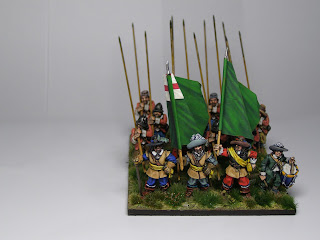 Thankfully I keep a folder where I jot down the step by step processes and which colours I used for each unit.  If I need to pick things up later to finish a unit (as in the case of this particular regiment), then there is no reason why I cannot match the remainder of the unit.

Over the years I do change technique but as long as the basic colours are used then all is well. I merely update my methods and over-staple the new sheet over the old ones - I can track my own change of styles and techniques this way too.  I find it strangely interesting - especially my change from white to black undercoats. 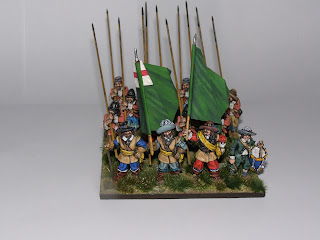 This regiment served in Sir William Waller's army during the Western Campaign of 1643.  In some books the Colonel is noted as Edward Cooke, but Edward appears to have been a Colonel of his own cavalry regiment.  Sir Robert died in 1643. 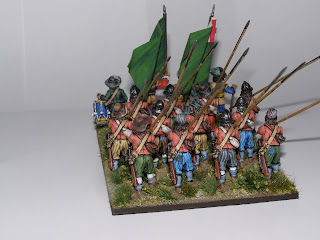 I have made guesses at the uniform coat colour and the flag colours as they appear to be completely unknown for this regiment.  I chose these colours simply because I liked them and the coat colours differed from previous paint tones used.  I have red coats on some of my units but I wanted more of a faded russet for this one.  Foundry terracotta shades seemed to work perfectly. 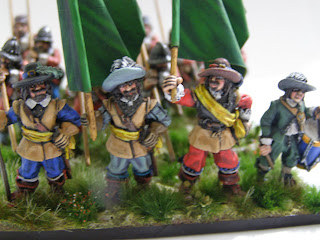 Sashes have been painted in yellow shades to reflect allegiance to Sir William Waller.  There is no definite evidence that I have found that regional commanders had their own sash colours, but orange was associated with the Earl of Essex and Waller was no friend of Essex.  Having his men wear Essex's colour would probably have been hard to bear.  I have read that it is now believed that the New Model Army and Fairfax's men wore blue sashes, though I wish I had made a note of where I read that. 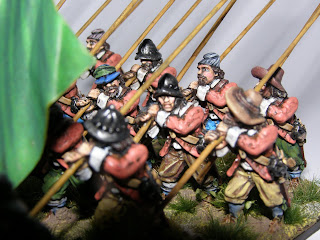 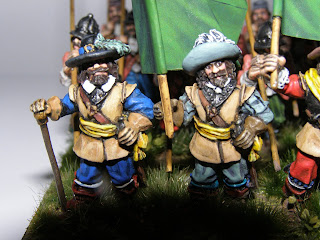 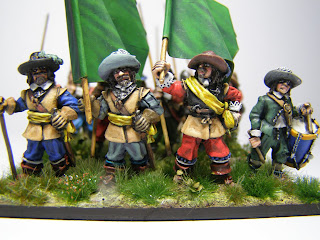 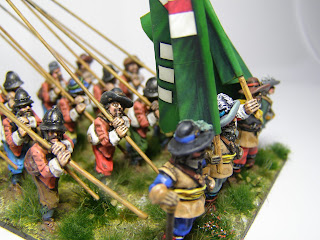 As usual I have based the figures on MDF with magnetic sheet at the base to hold the figures safely when in their box. 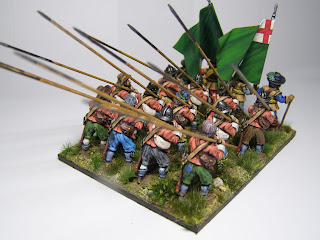 I don't normally go for marching poses, but there was something about these that I really liked.  I thought that one regiment marching surely wouldn't do any harm.  I have moved the officers to the front from my usual mid-formation position.

Amusingly (or painfully!) when I move the figures I just have to remember that the pikes are now facing my hands!  I do run a metal file over the tip to remove some of the needle-sharp qualities of these steel pikes to attempt to prevent serious injury though they are still sharp enough to dig deep (as my camera lens found out 3 years ago when I last photographed pikemen close up!). 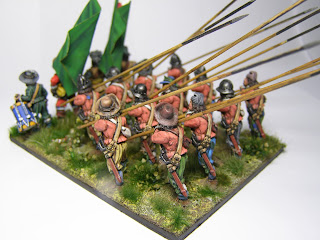 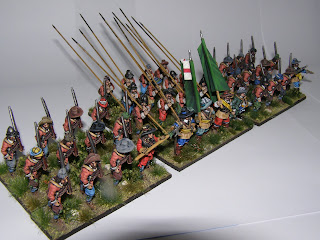 ...And here we have the rest of the regiment joining the pikemen.  I like my ECW units to have some depth and to look impressive.  40 figures are my usual for ECW 'standard sized' foot units. 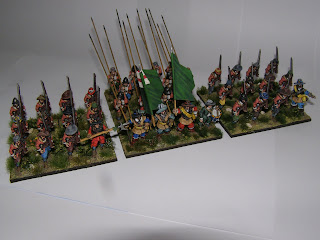 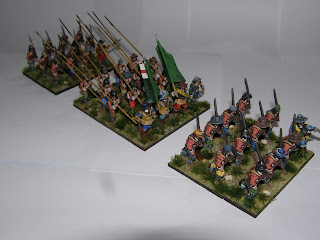 Sir William Waller's army are on their way to being fully represented for the Western Campaign of 1643.   I will have to do work on the Royalists again soon.
Posted by Jason at 02:12 21 comments: 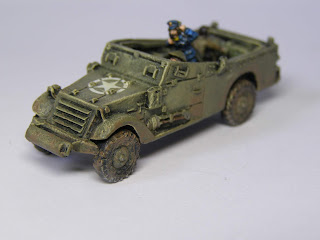 This is the Battlefront produced 15mm M3 Scout Car with Forward Air Controller.  As models go, this is a really useful and interesting one to deploy in Normandy games.  The air supremacy of the Allies over Normandy is undeniable and the use of aircraft in the ground support role was a major factor. 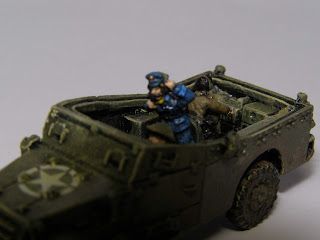 I really enjoyed putting this model together.  I love the characters included with the kit.  The above photo focuses on the radio operator with his kit in the back. 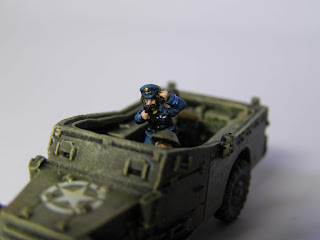 It's interesting that the FAC's usually wore their blue RAF tunics in the front line and made a point to be well presented (see last photo at the bottom of page).  I really enjoyed putting all the detail into this Flight Lieutenant. It was time to get the single hair brush out again! It was also a nice change after several weeks of painting shades of olive green and khaki. 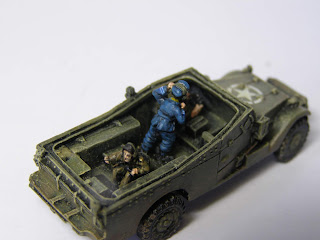 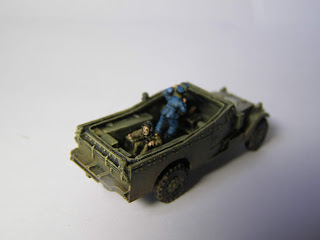 I am sure that this vehicle will be coming into play a lot in the future in my games with the 'Panzergrenadier Deluxe' rules, and bringing my Victrix Typhoons roaring overhead to attack the SS divisions in the bocage. 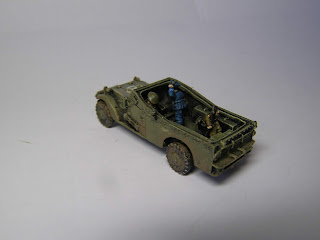 Below is one of the most amazing photos.  The Forward Air Controllers really did look like this and here is the primary evidence. 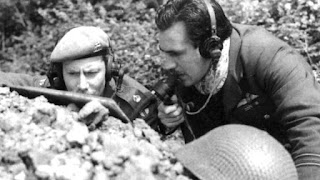 I know that it is currently fashionable to carry out revisionist history exercises, often done by new history authors in an attempt to sell books.  Recently YouTube 'pundits' seem to be delighting in stats showing that air attacks over Normandy were not as effective at knocking out German heavy armour as the airforces claimed.

I have no doubt that it is easy to be over optimistic in the heat of battle and the analysts at the time found that there were less AFVs lost to ground attack aircraft in Normandy than claimed when air crews arrived back to base.  However, for the German's - being on the receiving end of rocket firing Typhoons is not going to be good for morale, nerves, soft skinned vehicles or human skin.  I don't think that the allied infantry would have been that displeased to see Typhoons streaking overhead to support them, and that ultimately, is all that really matters.