On 24th August Ian and I had another game of Black Powder for the French Indian Wars. 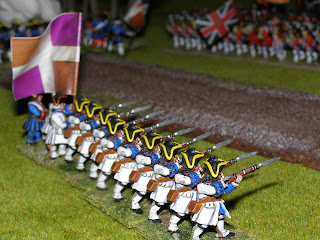 With the success of the previous game (and another which I have completely failed to write up!), we decided to have our third French Indian War game in a row (there is a 4th planned for next weekend!).  I think this is a good illustration of how much we are enjoying gaming this period with this set of rules.

Now I must confess to having been quite dull with my scenario setting for many years now.  I think the reasons for this were that gaming opportunities were rare until this year,and time minimal.  With these constraints  I tended to just set up the board for a meeting style engagement.  After having been inspired by so many of your blogs and your after action reports, I decided it was time I was a little more imaginative.  I was also encouraged by feeling very comfortable with the Black Powder rules and confident that we could reach a conclusion to a game within the 4 or 5 hours we had to play it in.

I decided to start with all figures off board to add an air of uncertainty.  Further, instead of having just the objective of beating the enemy's army, I set a simple scene around the forthcoming battle.

Scenario
A British supply column is approaching up the road which runs North to South up the board.  This supply column is intending to reach a fort up the road the following day.  The British have troops in the area who have been tasked with securing the area of the road, cutting trees and protecting the column.  The French with their Indian allies are already aware of the approaching column and have moved into the area. They intend to drive the British out of the area so that the supply column can be attacked. 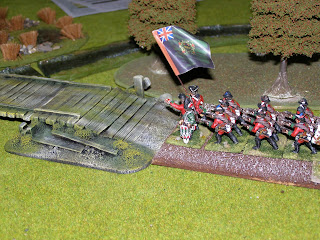 The arrival of the first British Brigade in march column

Deployment
A British Brigade will enter from the North in march column and head down the road to the South. They have an artillery piece with them which through misfortune is having to be manually dragged.  The French are permitted to bring a 'light' brigade of Courier de Bois and Indians in the centre of the board in the woodland. Entry to the battlefield area for more brigades is only permitted by dice throw beating command values in following turns.

Forces
Three Brigades per side, with a variety of between 3 to 5 units Battalions per Brigade.  I should point out that Ian had painted some superb Seven Years War Russian Infantry this week and we both agreed that they should be allowed on the table.  They are French Infantry who unfortunately washed their white coats with some French soldier's green underpants - which caused a 'dye incident'. Hence greencoats on French side!

Rule Amendments
All of the previous rule amendments were adopted again, but with one more additional rule change to the normal Black Powder rules.
This time we said that charges can no longer be made on initiative by units within initiative charge distance of the enemy.  The reason for this is that it seemed bizarre for a unit which has been chewed up by musket/artillery fire to be allowed to automatically charge home.  Surely they must check for forward movement of some sort?  After all many history books do state that charges were frequently shot to standstill before melee contact was made - look at all those French column vs British line situations and those American Civil War Battles (ok better rates of fire etc I agree).  This rule change was very satisfactory and made a lot more sense.  We decided that a unit had to check for movement against its command value just as if it was going to make a normal movement.  However, retirement movement could be made on initiative as per the rules.

Game Turn One
The British advance slowly up the road.  French brigade is in the wood.  No other actions. 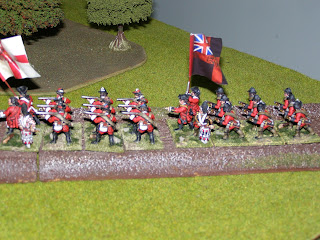 A slow but steady advance on Game Turn One

Game Turn Two
Not much action so far.  The French await developments before doing anything. The British move slowly up the road with the one brigade

Game Turn Three
The French deploy Montcalm's brigade in the centre and their last brigade right at the south end of the board.  Suddenly things are happening! 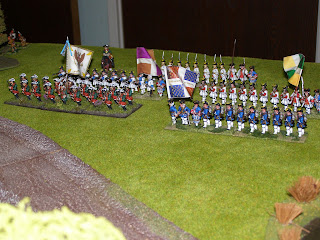 Montcalm's Brigade enter at the centre of the battlefield, threatening
to cut the road almost immediatly

The two remaining British brigades deploy in the centre to try to rescue the brigade in march column.

Game Turn Four
The French central brigade cut the road and block the British march column.  All other French brigades march towards the action. The British realise their situation.  The march column halts.  A British brigade heading towards the French fails to move! This is bad news as the column is looking particularly vulnerable. 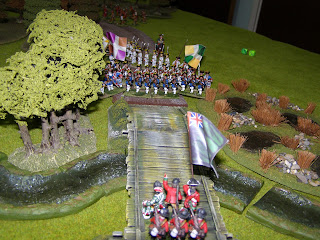 Game Turn Five
The French southerly brigade makes a triple move and starts to head towards the action.  For the British this looks critical.  The room for manouvre looks smaller and the French have taken the initiative in all areas.  The view of the battlefield seems to be shrinking already. Things could turn into a desperate holding action...unless something drastic is done quickly.
The British announce a charge in the Left centre...a great dice throw gives a triple move.  The British Louisberg Grenadiers and 78th Highlanders perform a wild bayonet charge on the Courier de Bois.  In the ensuing melee the Courier de Bois lose their 3 x stamina level plus an extra 4 men. This results in them being removed from the board. Standing to take a charge from Grenadiers cost the French dearly. 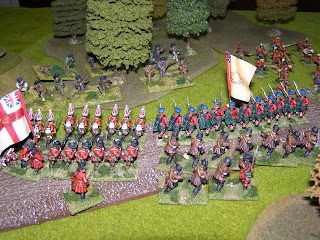 Game Turn Six
The remaining units in the French brigade deliver musketry and disorder both the Grenadiers and the Highlanders.  The British move up their central brigade to take on the French Northern brigade who cut the road earlier. The desperate British move to throw their men straight into the action to rescue the march column has had the effect of gaining local superiority of numbers...if the French Southern brigade can be delayed coming into the action.  The British march column try to extricate themselves from the road and withdraw into a fighting formation. 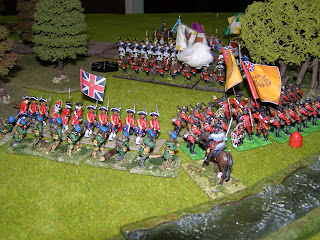 Montcalm's central brigade is held and a withering fire from superior numbers creates a killing zone for the Russians  ahem! Frenchmen!

Game Turn Seven
The French on the Southern flank start to make progress and there is a real danger that they will come around behind the British Centre. 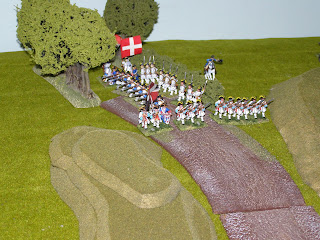 British skirmishers exchange heavy fire with the Indians.  The British who were on the road have managed to pull out and reform and are currently marching through the woods on the Southern Flank.  The French have a new threat to deal with as they are currently engaged to the front. 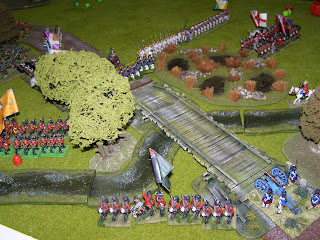 A dramatic shift in fortune.  The French brigade is being volleyed to its front while the previous march column has sorted itself out and is now lapping around on the Northern flank (right top edge of pic), the French desperately extending the flanks to hold them.  The artillery is now proving it's worth delivering shot straight down the bridge!

Game Turn Eight
The French realise that things are going against them and carry out some desperate actions.  The Indians charge the 80th Foot and a melee of hatchets and bayonets between the skirmishers ends in a draw for this turn.  The British volley fire breaks the Francophile Russians in the centre!  The British continue to reach out around the Northern Flank, giving the French a real problem. 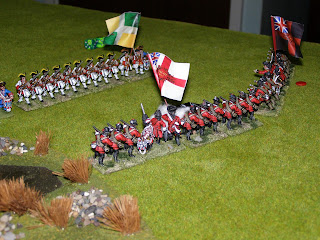 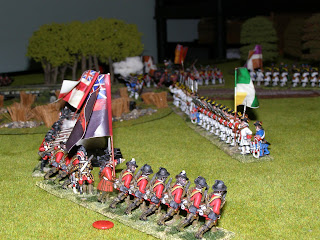 Another view of the glorious action unfolding.  The French are brigade is being surrounded.  The red counter on this Battalion symbolises that it has yet to carry out it's devastating 'First Fire'

Game Turn Nine
The French carry out assorted volleys. The British successfully turn about a battalion on the Southern flank to fight back to back 'Glosters-style' to hold off the encroaching French.  Fire shakes the 78th Highlanders. 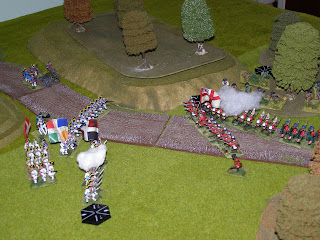 The British hold off the French by fighting back to back 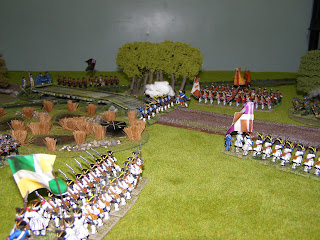 The critical point...The British pour enfilade fire in and advance with 3 battalions
in to the struggling French Brigade

...and that's it, all over.  This was mainly due to the time being close on 2am!  I think my adding abilities were fading by this point, but neither Ian or myself wanted to wind up a superb game.  I would go as far as saying it was the best wargame I have ever played. This isn't because of the result (my win!) but because of the way the battle developed, causing interesting challenges to both sides but in a not wholly unrealistic way.  It was also satisfying to see the way the game formed because of our responses.  The clear table at the start of the game allowed a picture to develop as we responded to threats. It was really a case of thrust and parry!

The battle lines remained constant even though we both had to refuse our flanks at opposite ends of the board. The battle was really up when one French brigade ran and another was in trouble when the enfilade fire of the British created a gap which allowed them to march three battalions into.

It was another success for the 'tweaked' Black Powder rules.  Truly a most enjoyable game.

(Ps.  While i'm actually writing a blog update for the first time in ages, can I just say it was good to meet Simon from the 'Big Red Bat Cave' blog at Colours at Newbury today.  Simon had a terrific looking Roman Civil War battle set up which was amazing. So if you are reading this Simon, a big thumbs up for what must have been one of the best games at the show)  :-)