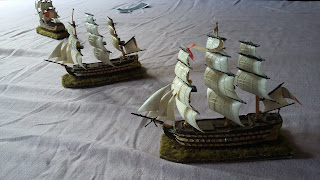 I have a confession...I realised recently that I had never ever played a naval wargame.  This is with miniatures in the conventional sense that we know.  I have played 'Battleships' of course the simple board game, and the 1970's boardgame 'Up Periscope' with it's ingenious periscope on the vertical playing surface allowing you to see the other players ships (and cheat by bending the board and counting the peg holes to obtain a hit!).  But as for 'proper' wargaming - nope never played one. 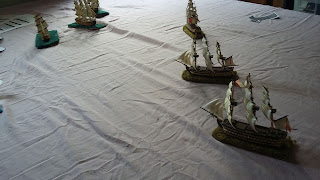 Years ago I had my eye on the Games Workshop historical set 'Trafalgar' but then they stopped producing it and the price went through the roof of second hand copies. I had never read the rules so didn't really know what I was missing.  I did read blogs saying how good the Too Fat Lardies rules are and last year I decided I must give them a try one day. 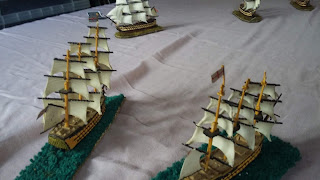 To deviate slightly, this coincided with my attic undergoing a grand tidy up.  I have lived in the same house for 26 years and some boxes have never been moved since I moved in.  As I moved some boxes I found some that had been crushed somewhat.  To my dismay I found these ships at the bottom of the flattened cardboard box and in a terrible state.  I rescued them and put them into plastic storage boxes positioned at the top of the attic.  My plan was to rebuild them.  Of course time marches on, but I could see the ships every single time I went into the attic and I felt dreadful about their state. 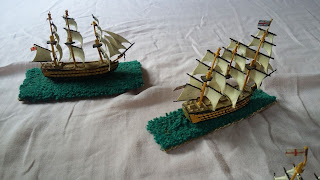 Three weeks ago I was planning what game to play with Ian for one of our regular battles.  I decided that it would be a great opportunity to do something completely different. I did some more blog searching about rules and decided to download the set called 'Kiss Me Hardy' by the Too Fat Lardies.  This was inspired by the blog-site 'Last Hussar's Barracks' which is a superb blog and well worth following.  His write up and thoughts on the rules inspired me...and also filled in some gaps in the rules. More of this later. 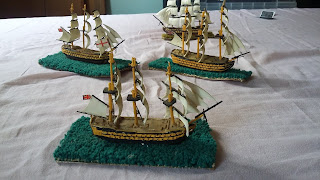 So rebuilding the ships. This took a whole day.  It was difficult to work out which parts belonged to which ship, but by detective work it all came together.  There is a story behind the ships.  I remember as an 11 year old seeing a newspaper advert of someone selling their models in the nearby village of Long Hanborough in Oxfordshire.  This was of course pre-internet and I had no idea of what was for sale.  One just took a chance and went and had a look.  I was just really getting into the Airfix 1/72 Napoleonics and I hoped this is what I would find.  This was in 1982.  A very nice chap called Maurice Wilkinson and his wife Elizabeth showed my father and I to the attic wargaming room. I was bowled over by what I saw....hundreds and hundreds of model tanks for sale!  All arrayed like a Soviet May Day parade.  Each had price labels next to the tanks. 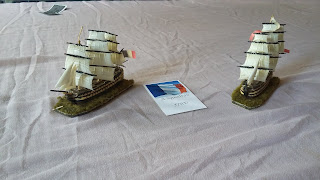 I decided that I would like to branch into tanks too, and I persuaded my father to purchase a few for me and I parted with some pocket money too.  I went away with a number of tanks but other models had caught my eye.  This was the first of a number of visits over about a year.  The ships also came back with me after one visit.  These must have been made in the 1970's or even earlier.  I think they are Airfix kits, converted in some instances.  The plastic seems quite brittle now and the carpet basing to us now seems so basic but at the time I'm sure it was pretty standard.

Maurice was clearly a keen wargamer and it seemed sad for him to be selling everything. I bought as much as I could. I have around 100 tanks sat behind me in storage boxes right now...but I digress again. This collection had an enormous influence on me (as well as just seeing all the other stuff he was selling) and it really was the start of 'proper' wargaming for me (and not just throwing ball bearings at 1/32 Airfix armies in turns as I had done till that point...fun though it was!).  If anyone knew Maurice I would be interested to know more background about his wargaming and the games he played. 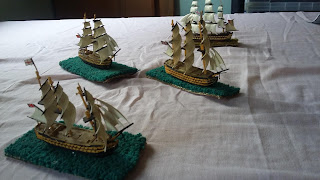 I felt much better when the ships were built. All the memories of first seeing them as an 11 year old came back.  I have no doubt they are a bit wonkier now and some parts were just too delicate to stick into place, but those missing flag poles will have to remain battle damage for the time being. 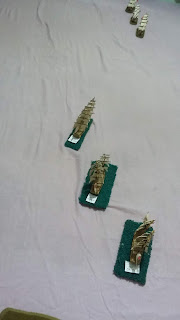 I allowed myself a day to play-test the rules.  One thing I should mention is that the camera is not lying. The sea is a lilac colour!   I found I don't have any blue sheets. It was lilac or green and green is too field like for me.  So lilac it had to be.  The play-test was interesting.  The blogs I read had said that the rules were superb and quite brief. BUT descriptions and explanations were missing. The rules really assumed some knowledge in places and didn't explain some things.  Thankfully the rules are quite intuitive and you could kind of get into the designers mind and work out what tests etc should be applied where and work out the only way things could really work.  I had never played a card-driven game before, and had slightly shied off this concept for some reason.  However the card-system here was really very good indeed.  I have to say that I had a lot of fun play-testing the rules and after just one solo game I felt that I could run a game.   I just knew it was going to be good. 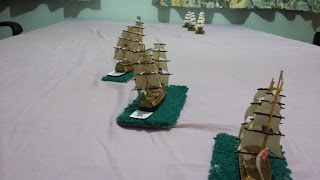 Ian commanded a 3-ship flotilla including HMS Victory as his flagship.  I commanded the French, with another 3-ship flotilla.  Both sides were similar but the British Crews were superior in most respects except long range shooting. 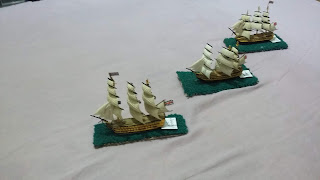 I had the wind against me much of the time and my ships struggled to make headway. However, timing it right (thank goodness for the play test on the previous day), I knew I could turn and let the wind take my ships at speed. My French 3-decker managed to 'cross the T' and raked HMS Victory, leaving it shot up badly. 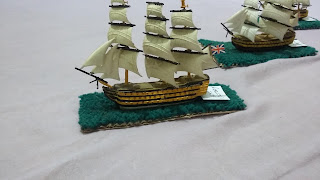 The battle was ferocious but the Royal Navy came off worst...this time.  To be fair it was the RN commanders first naval wargame and first time seeing the rules, so we were just going with the flow really and seeing what happened as we tested the rules. 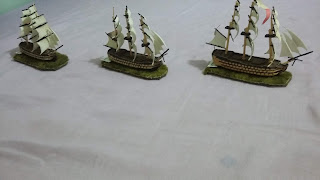 I have to say that the rules 'Kiss Me Hardy'  (now referred to here as 'Napoleonic Naval Rules (KMH)' as I have written on the spine of the rules folder) are superb. Not too complex but enough period style rules and action to give a really brilliant game. It felt like a Napoleonic naval battle and it was great fun to play.  I look forward to playing them again!
Posted by Jason at 23:58 14 comments: