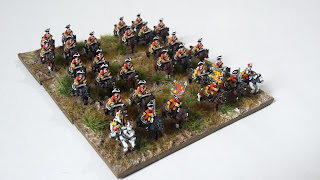 This post sees the addition of cavalry and artillery to my British Army of 1746.  All of the models are Pendraken 10mm. 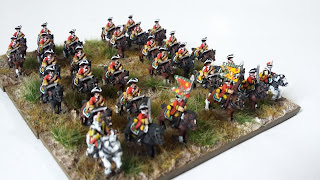 The cavalry are painted as the 10th Dragoons (Cobhams), who were posted on both flanks at Culloden. 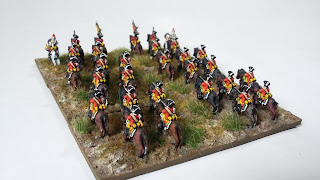 As I'm trying to create the armies in as closes as to 1:10 scale of the actual forces in the Rebellion (without having unsightly figure gaps or massive wastage of figures).  The historical splitting of the Regiment meant that I had to do two things, which I don't normally tend to do. 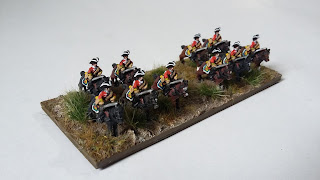 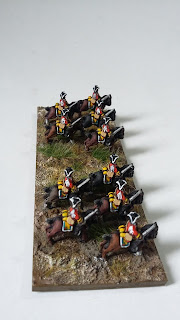 I was undecided about the basing  even as I was creating it.  Normally I use a base and proceed to fill it with troops.  Unlike 28mm, I have been trying to reduce Regiments to one stand to save moving multiples of bases per turn.  As described above, the need split the 10th  to cover both flanks meant that I didn't have this option.  So I decided to put two Troops on one base (one Squadron).  This meant a small gap between troops.  It looks unusual, but will hopefully grow on me!  The practicality will become more apparant in the game.  I don't have a need for individual cavalry Troops to run about on their own. 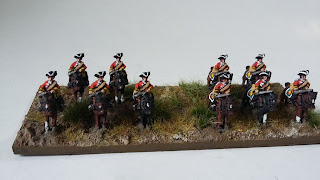 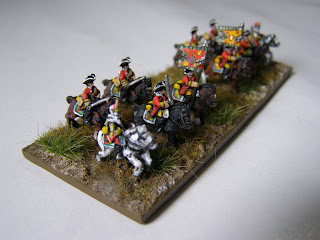 The flags came cast on so required some research and painting.  The excellent resource at  www.kronoskaf.com has helped in so many ways with my British Army. 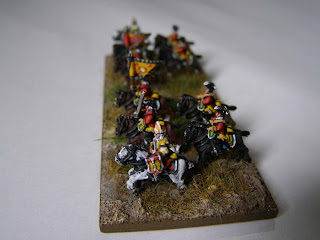 The larger number of figures used, 30 figures for Cobhams 10th Dragoons, meant that I could use both the Kings and Regimental colours and it wouldn't look 'flag heavy'. 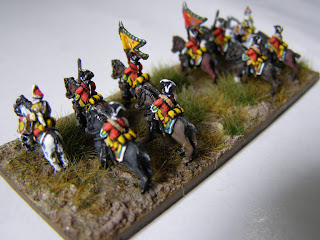 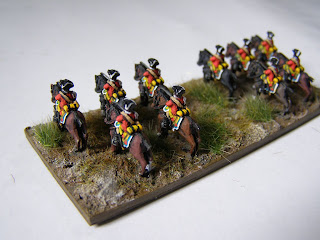 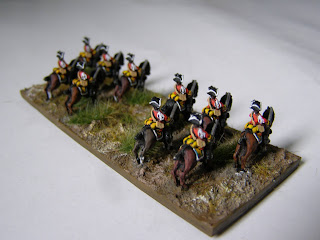 In addition to the cavalry I now have all of the Royal Artillery I require.  Below are 3 pounders with crews.   I'm still unsure what to do about the artillery in the game.  If I was to issue the guns out to scale then I would need just one piece for the whole army.  This looks a bit wrong, especially as guns tended to be placed between infantry Regiments. 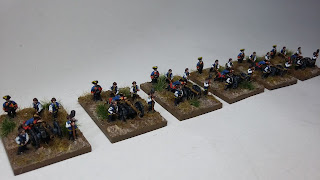 To cover all options, I decided to paint all of the contents of the two packets of guns and crews.  This gives me options for later. So I now have 6 x 3 Pdr guns. 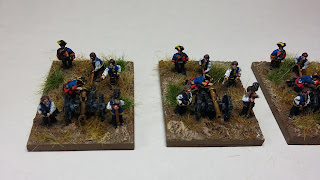 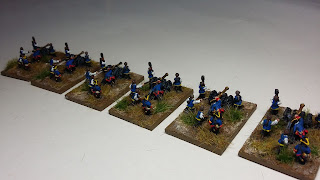 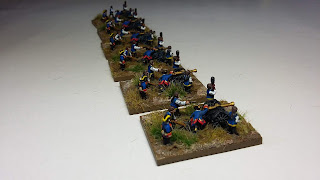 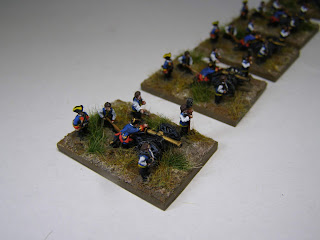 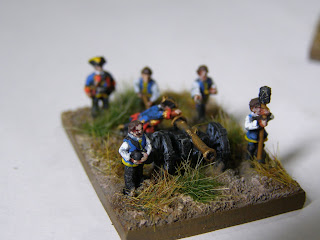 The Royal Artillery also had Coehorn mortars on the battlefield.  These were not reported to have been effective.  The soft boggy ground at Culloden probably minimised the effect of the mortar rounds.  Even so I decided to include them for completeness, even if it might take some pretty good dice throws to get any hits in the game! 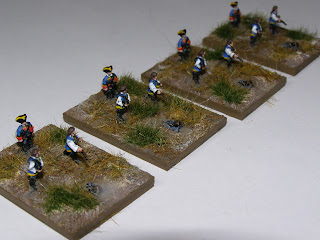 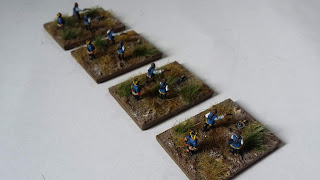 I took the opportunity to take photos of the figures with both my Samsung Galaxy camera on the smartphone as well as with my 14 year old Olympus digital camera.   Interestingly both seemed to perform as well as the other so that didn't really help in my experiment.

I'm doing my very best to stick with this particular Jacobite Rebellion British Army project.  I have so many other interests trying to pull me in different directions.  Last week I purchased one of the Too Fat Lardies Christmas Specials just to get their Boer War rules and some scenarios.  This has proved to be really interesting and given me a lot of ideas.  The rules really are quite a revelation with their mechanics and I am really keen to try them (which means building an army first!).  Still it's all khaki...how long could it take..!