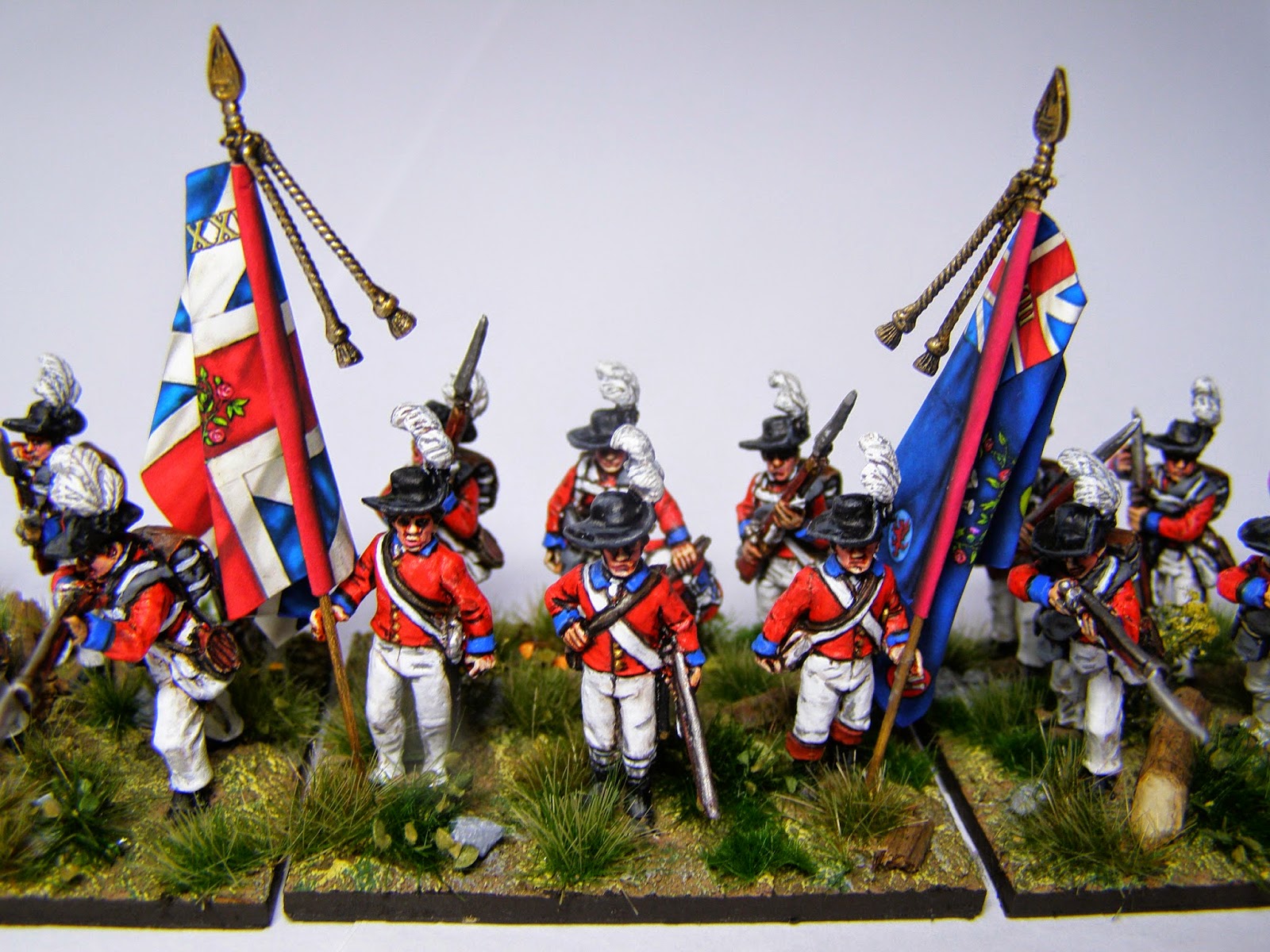 At last, a start to my British Army for the American War of Independence.  This is the 23rd of Foot (Royal Welch Fusiliers).   My British order of battle will be based on the Guilford Courthouse campaign of 1781. 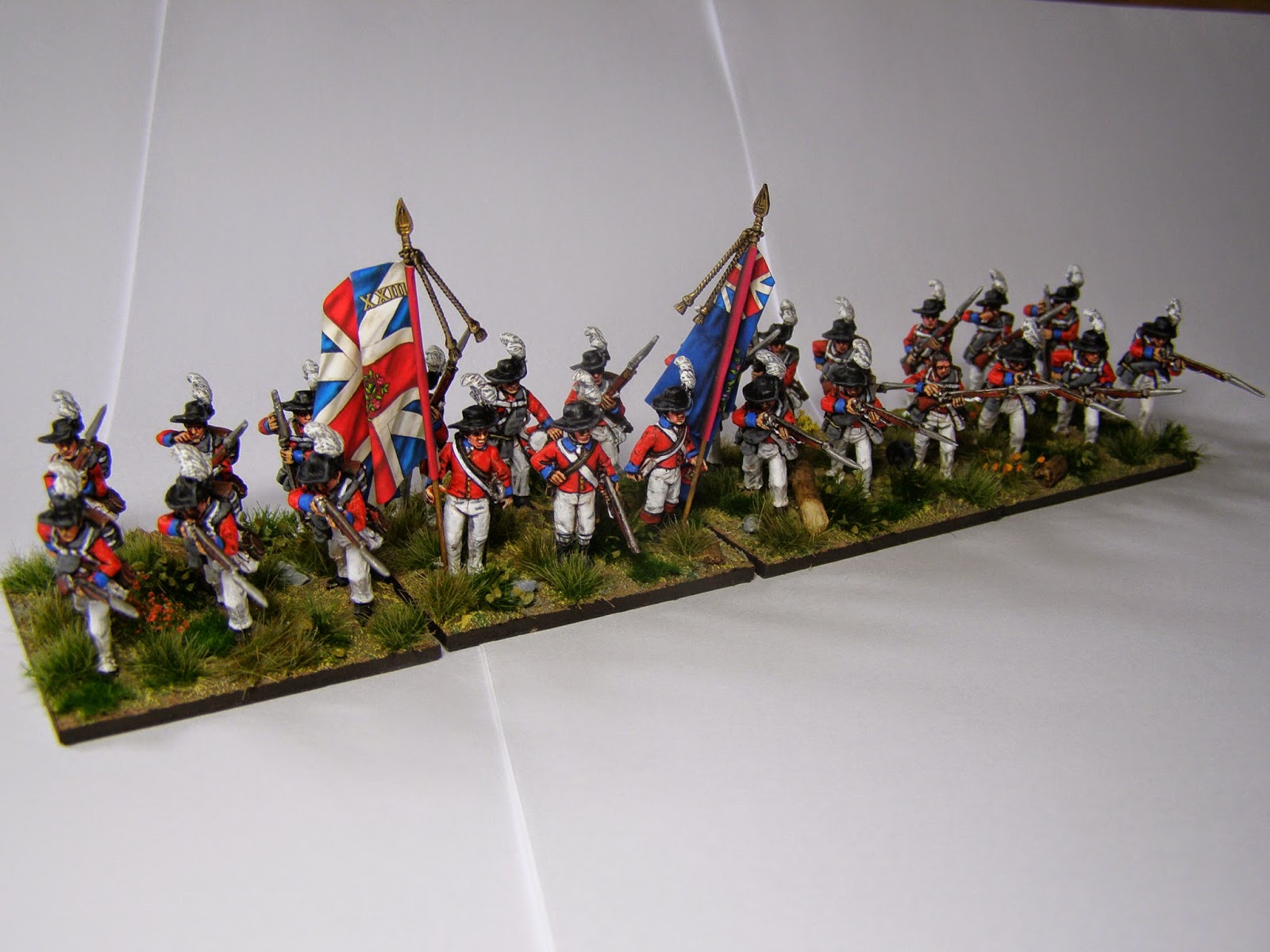 The figures are from the Perry's metal range.  I must have purchased these about five years ago and they have sat patiently awaiting painting all this time.  I managed to paint a couple of brigades of Continentals and Militia during my last AWI phase in about 2008. This was helped by recovery time post-surgery.  Probably the best thing about undergoing surgery is the necessary recovery period of taking it easy afterwards and those four weeks saw two full battalions of Maryland Infantry completed! 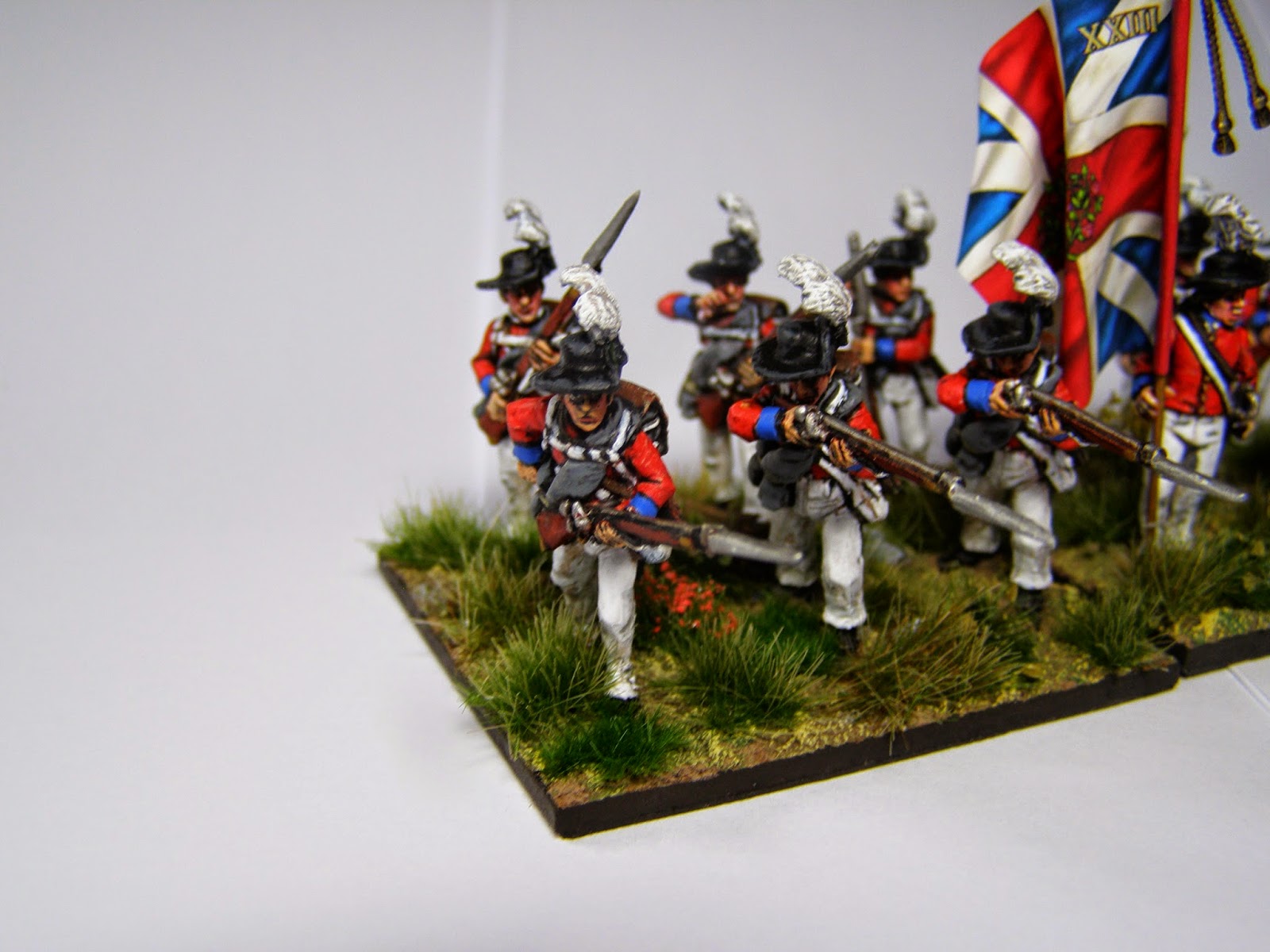 I painted these figures using my usual method of white undercoat, then base colours, dark washes to lowlight/texture, base colours again, and then highlight.  This is followed by lining-in and copious amounts of touching up (prior to varnishing and basing).  I'm happy with the finished result, but my goodness, it's time consuming.  I have just assembled a unit of the Perry's plastic AWI British Infantry which I have undercoated black.  My intention is to try the 3 step 'triad'-style method of Kevin Dallimore/Foundry (not that I have any illusions of getting to the same standard as Mr Dallimore!).  I just want to speed things up a little as I think I'm making my process unnecessarily complicated, and I don't have the time now that I did do. 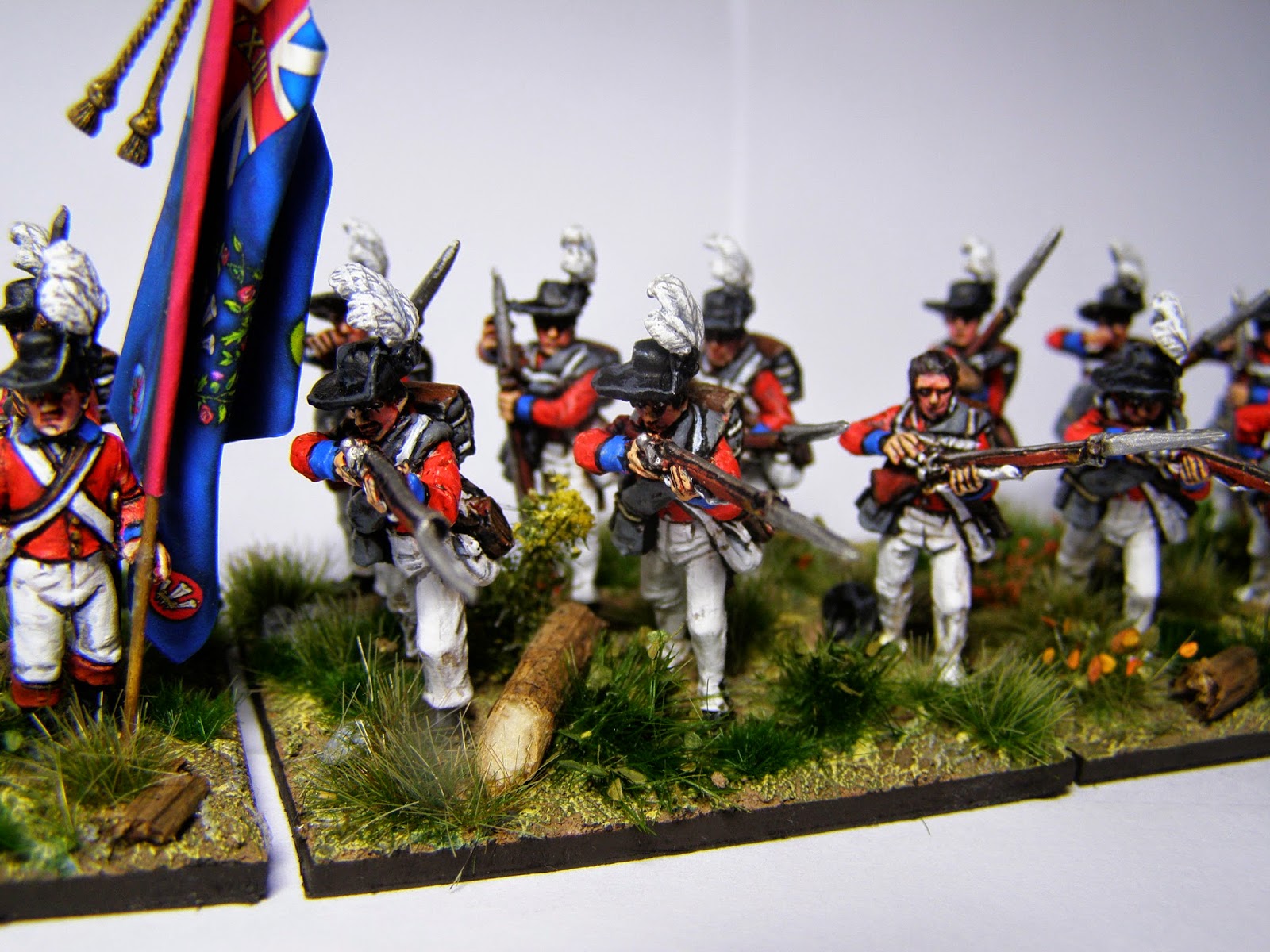 Of course- changing to a new painting technique might end up being a longer process, but I'll have to see. Nothing ventured and all that! 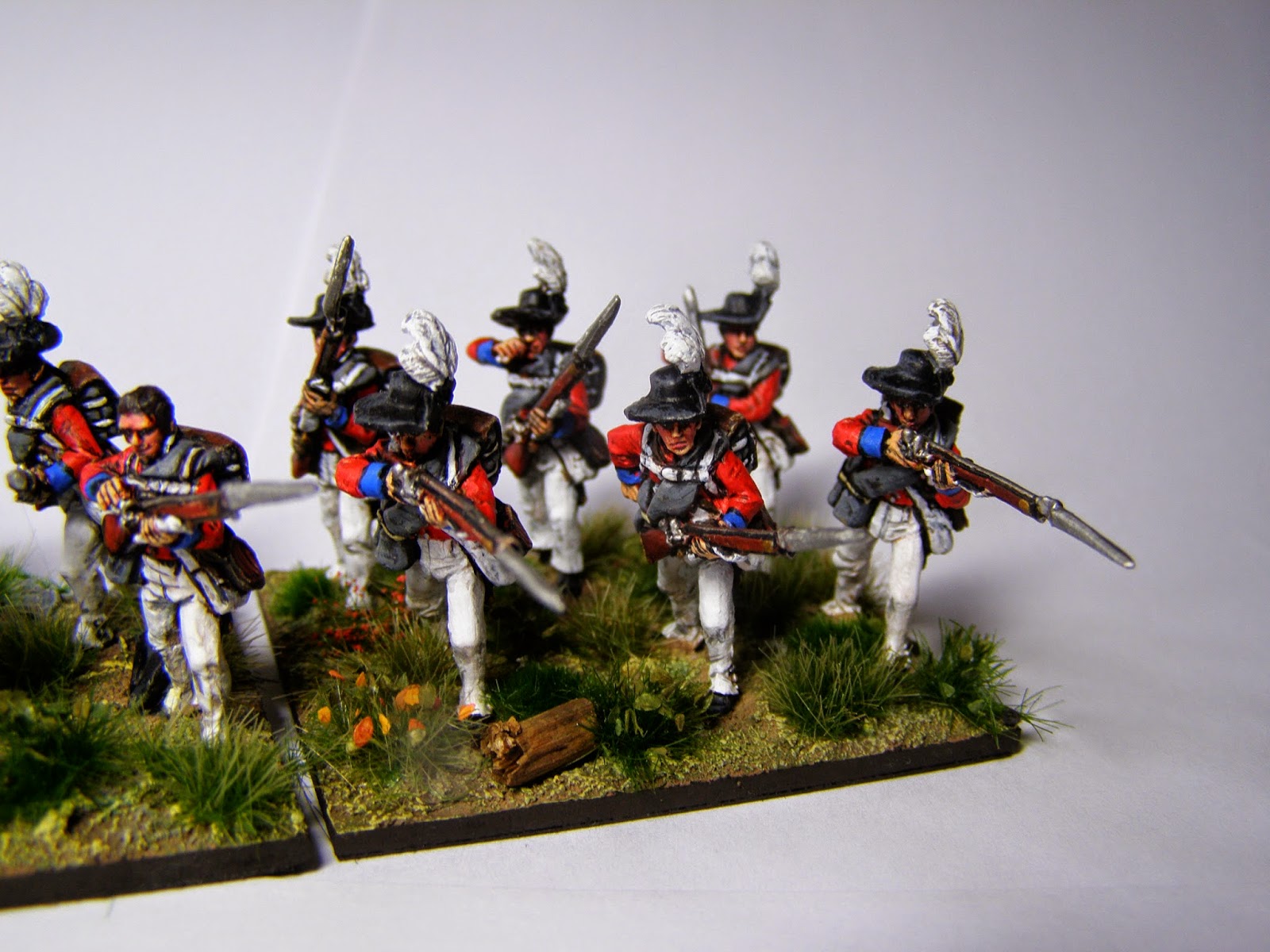 The flags are by GMB and the paints used are mostly Vallejo acrylics with some Citadel colours and Miniature Paints (the fine blue). 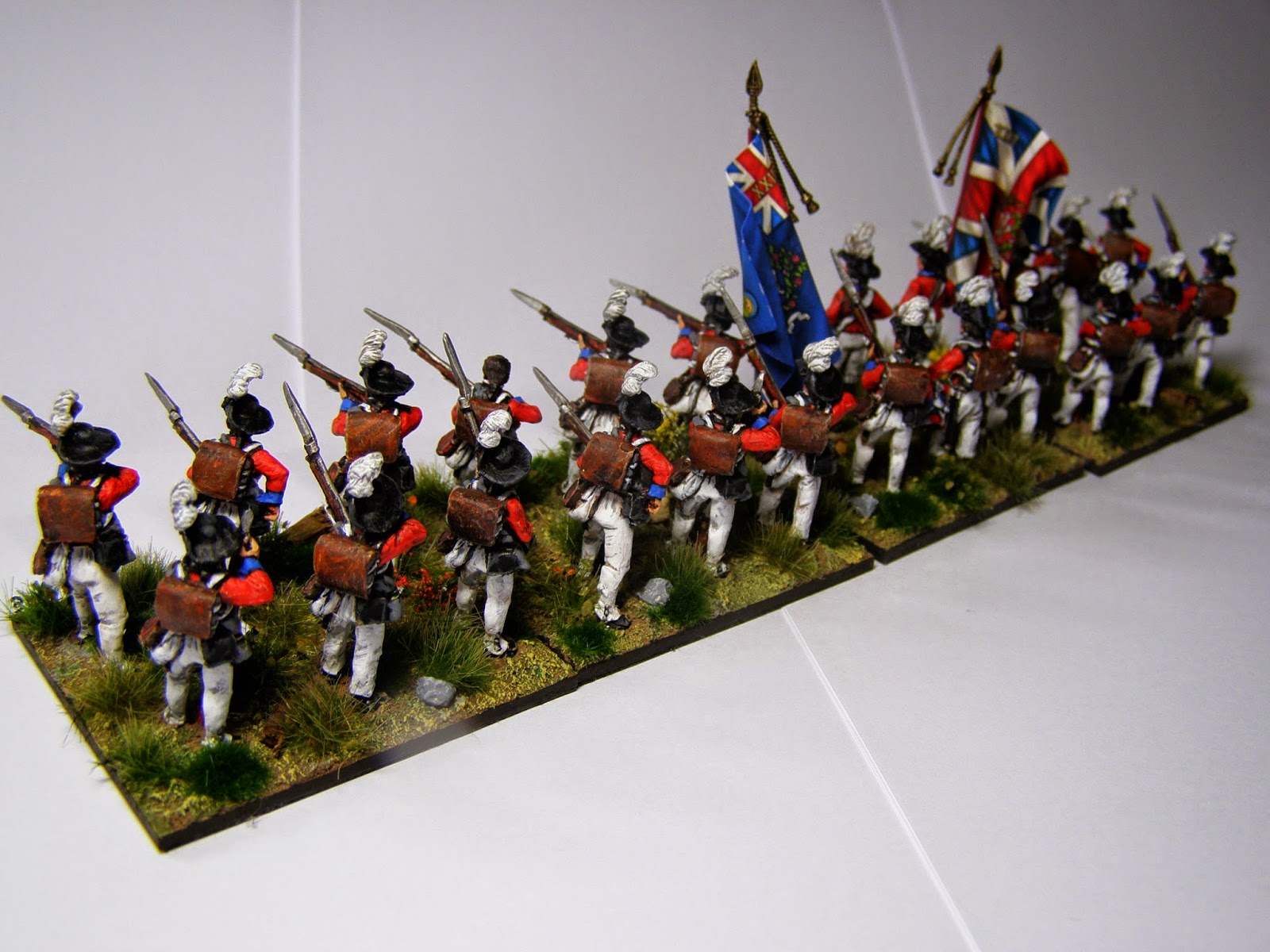 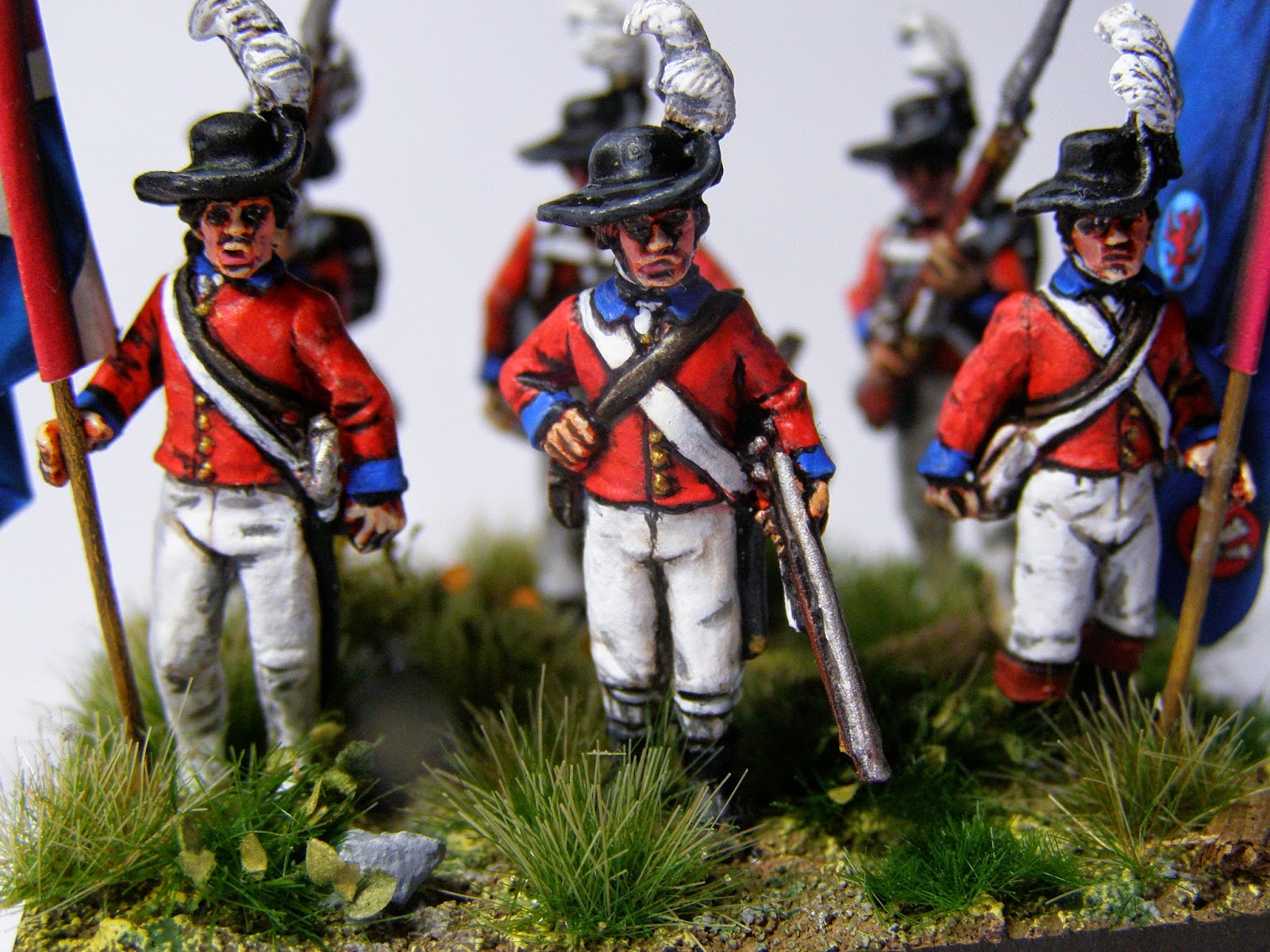 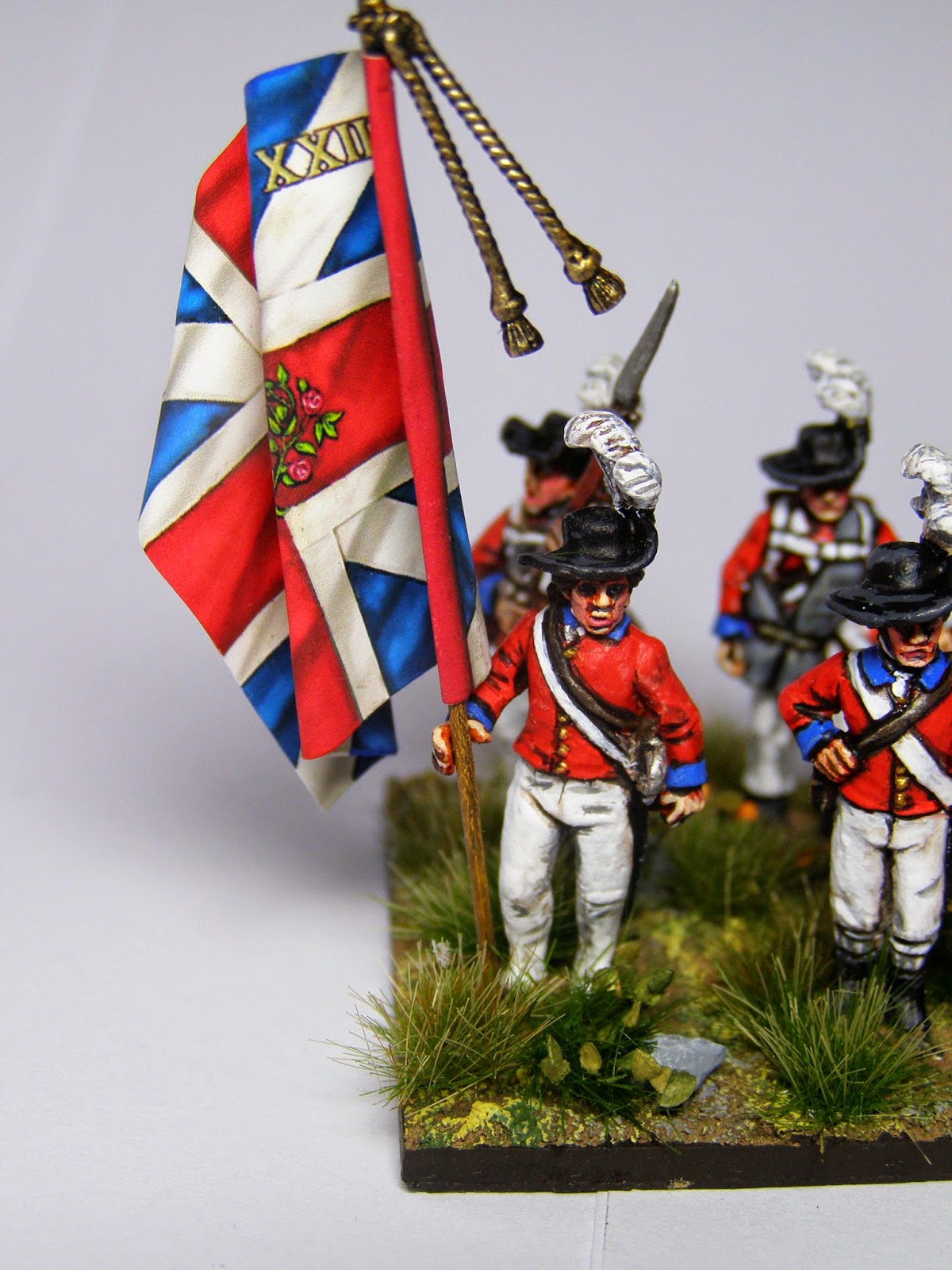 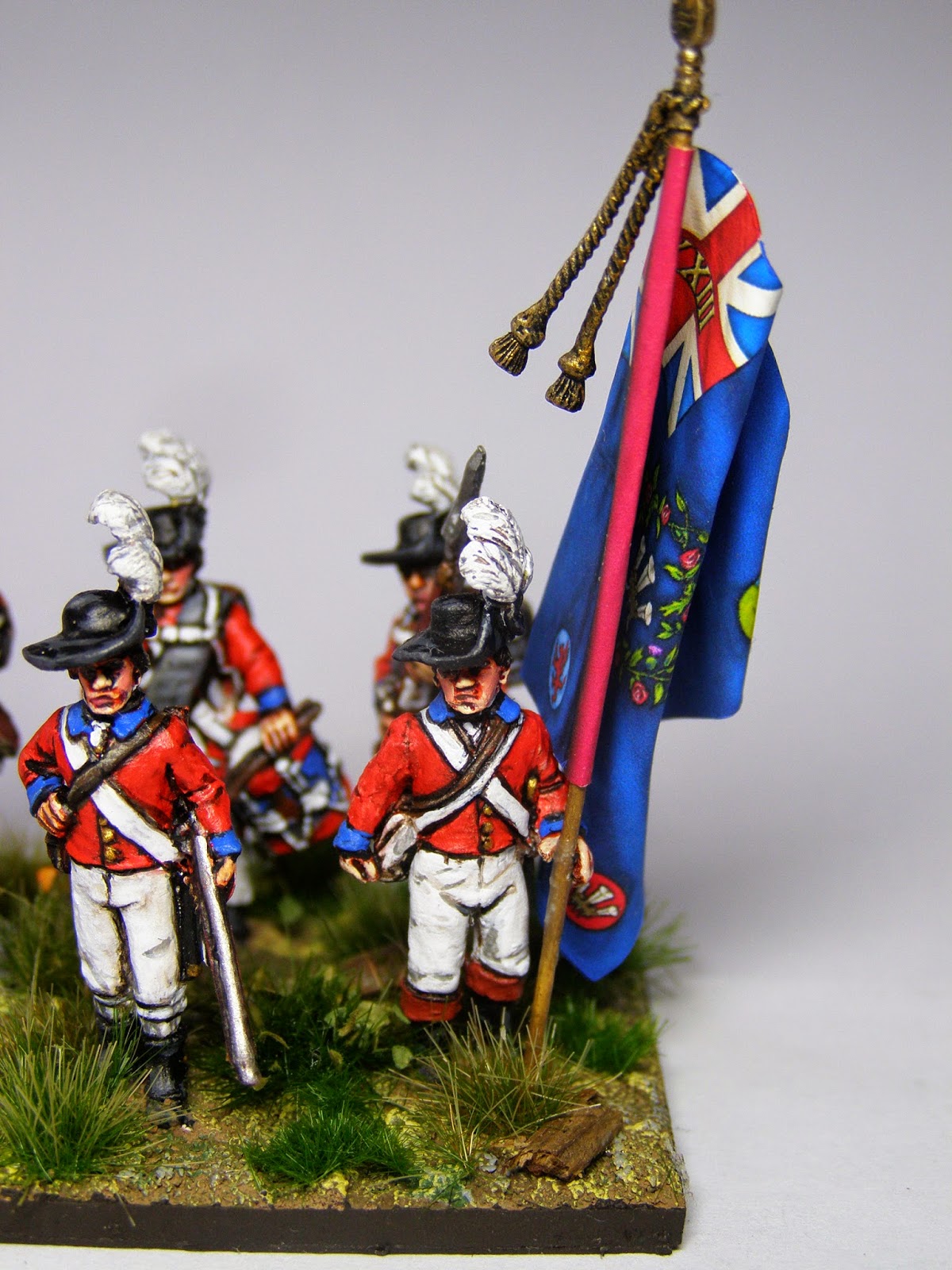 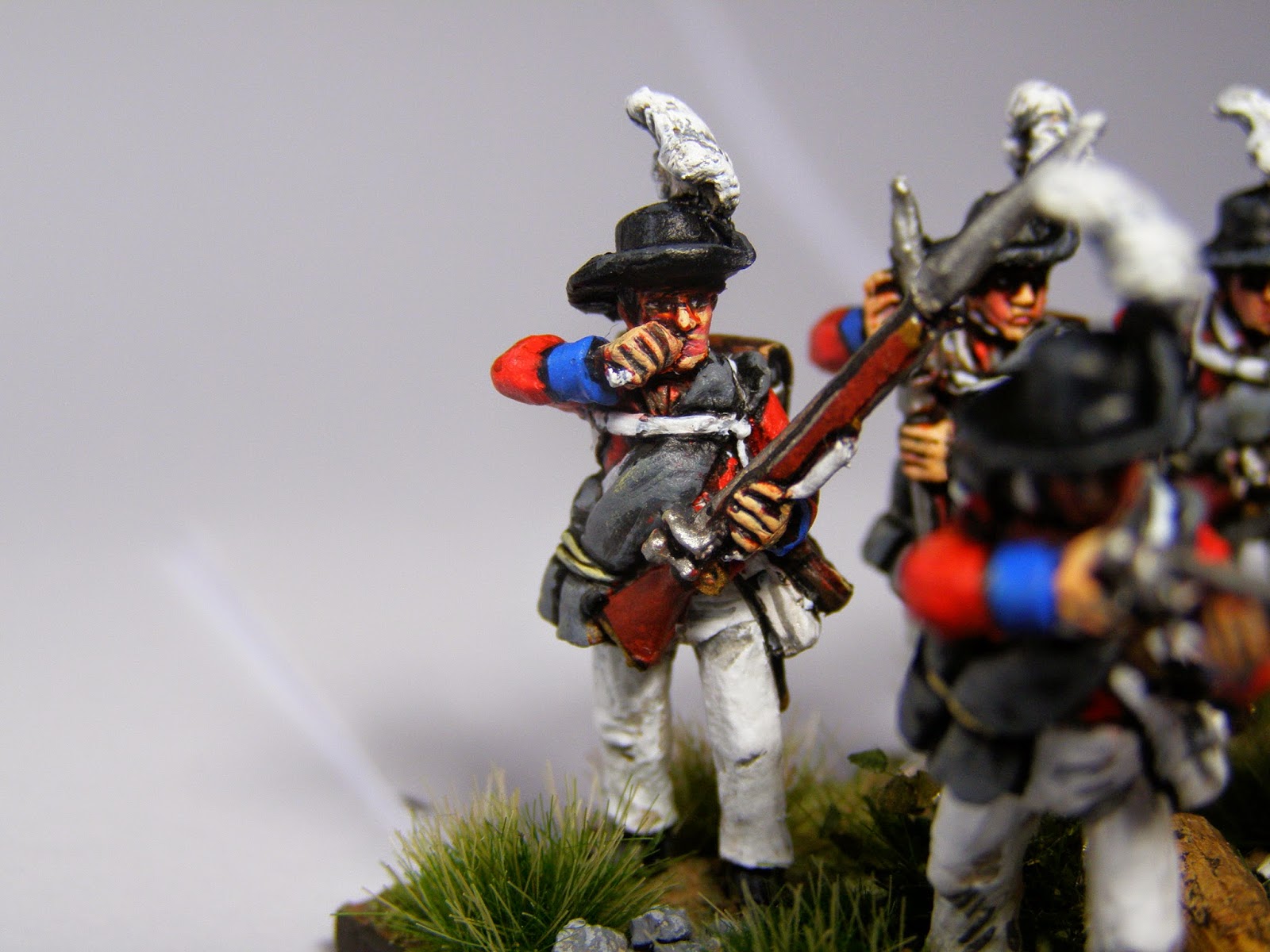 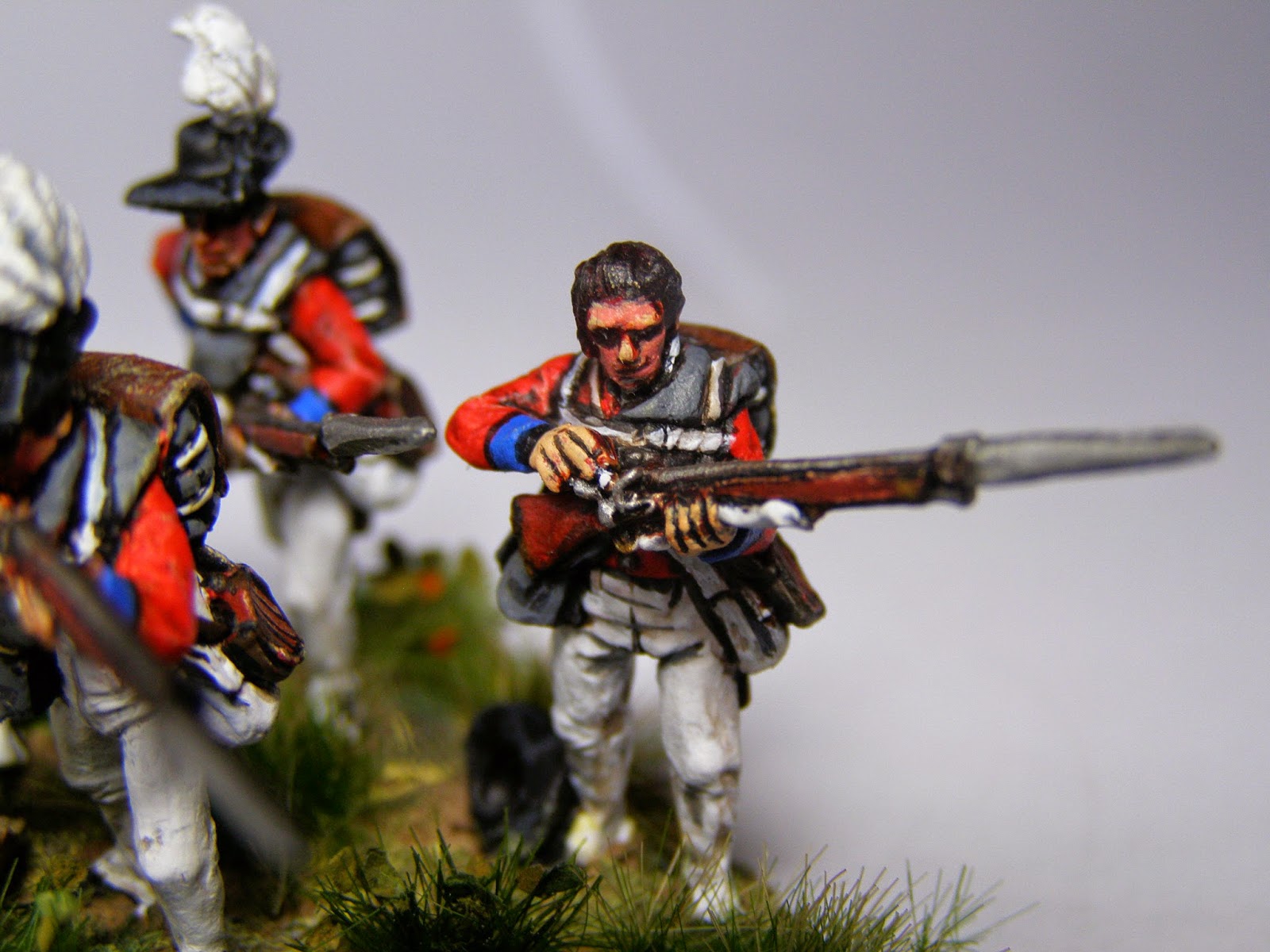 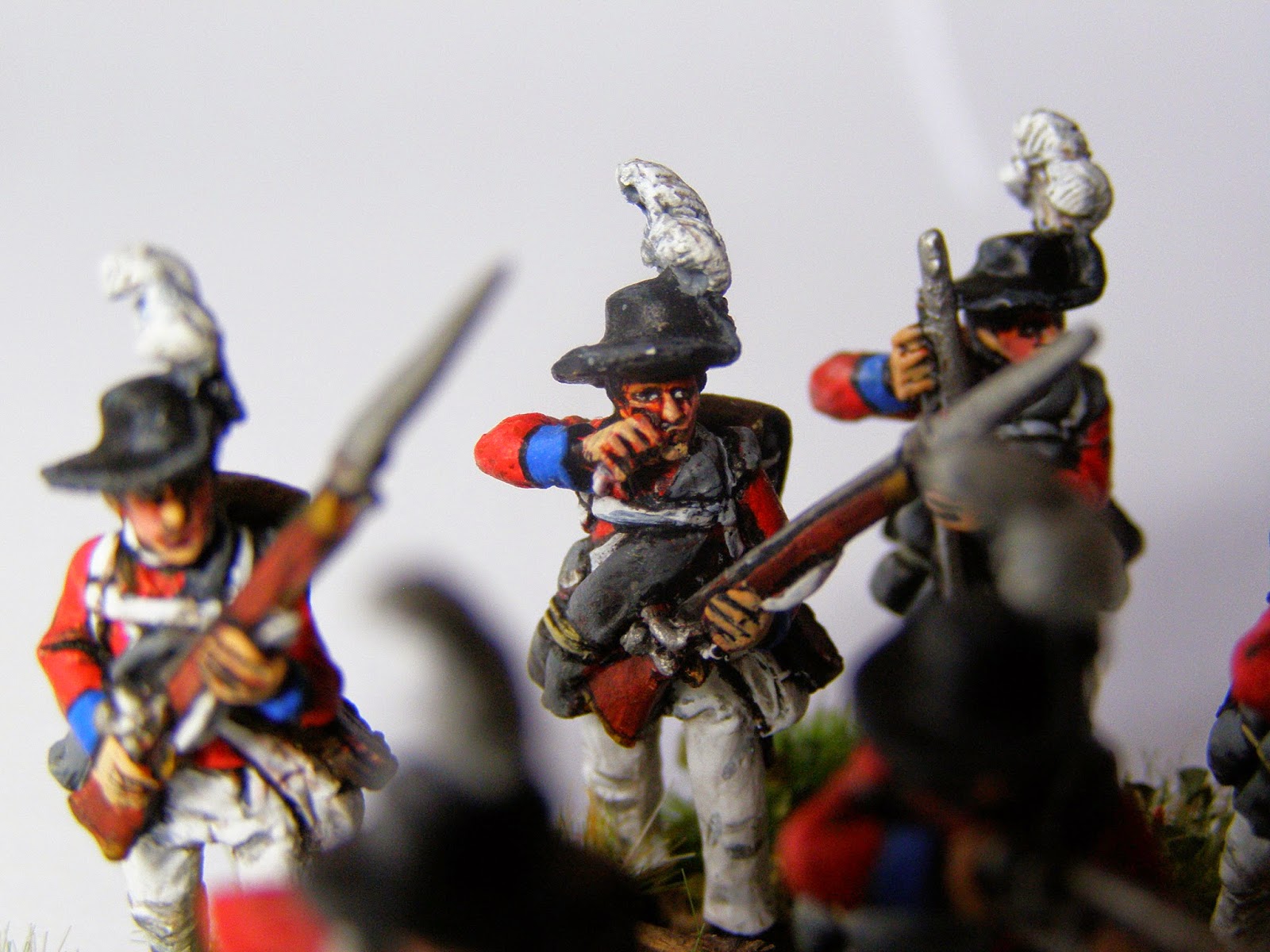 I have to say that it's a nice change from all the green armoured vehicles I have been painting.  As much as I enjoyed doing armour, it's hard to beat painting up a unit of red-coats for the sheer satisfaction of seeing the completed unit. Hopefully I will stick with doing AWI for a while, though the summer usually has me thinking about English Civil War battlefields or Normandy Hedgerows!
Posted by Jason at 15:52 14 comments: 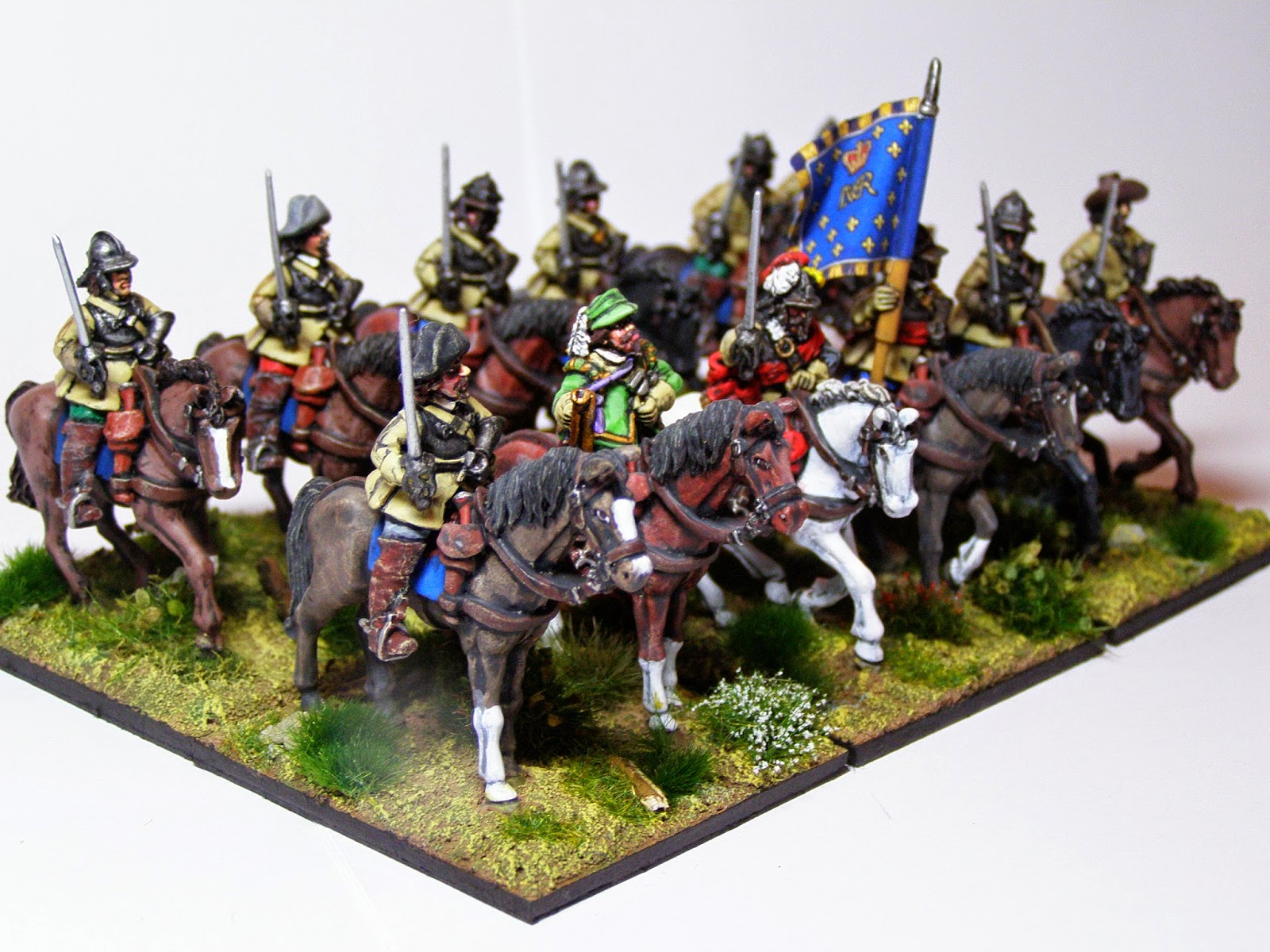 I thought it was about time that I posted pics up of this troop of horse.  I painted them last year and they have waited patiently for their turn as more recent creations have left my painting desk and been posted up almost straight away! 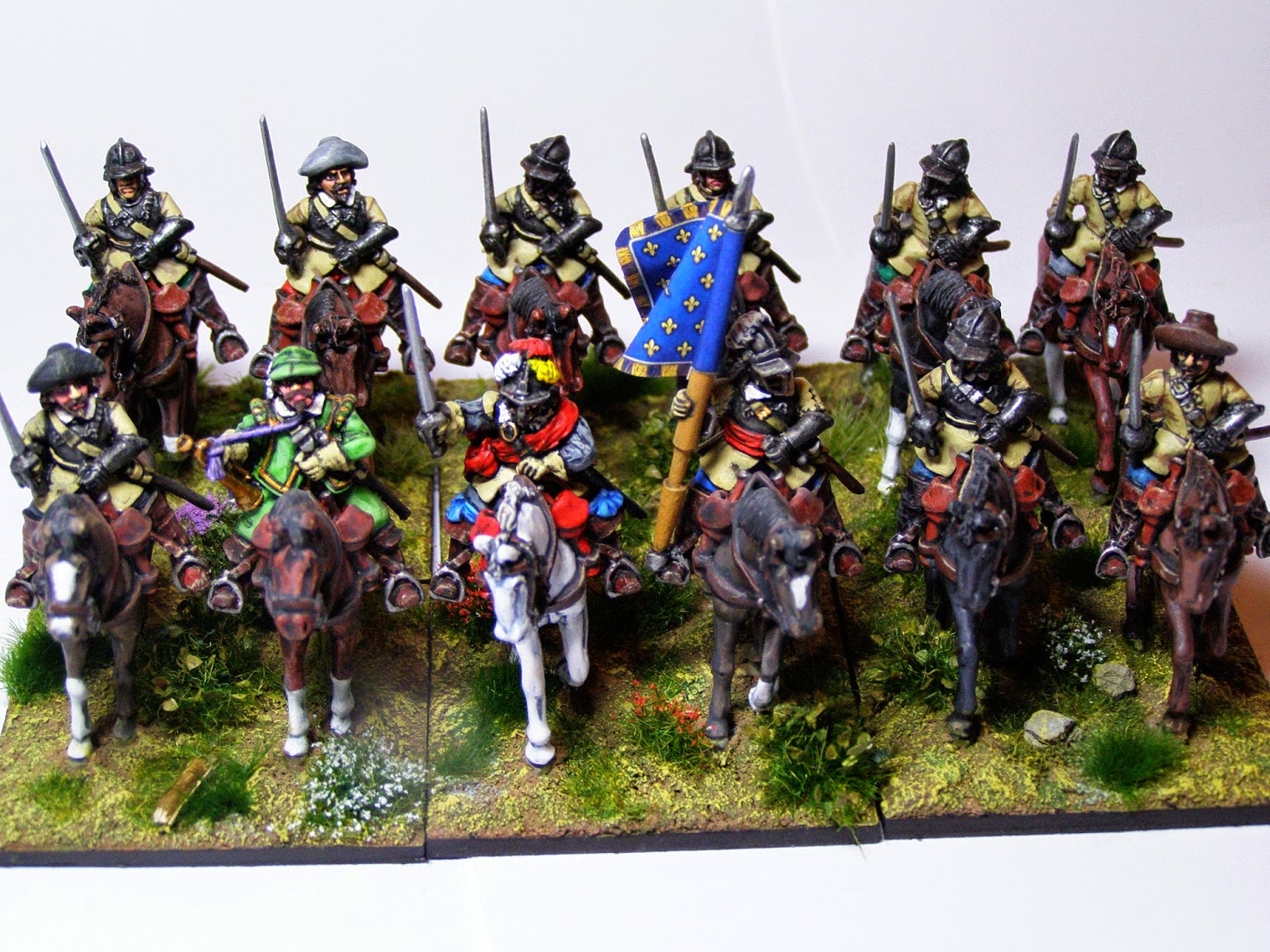 An ideal opportunity has presented since my painting time has been in short supply in the last few weeks  I have still not yet completed the current unit slowly reaching the lining-in painting phase.  I posted up the Colonel's Troop for this regiment last year and the addition of  this, the Captain's Troop means that the regiment is now wonderfully imposing on the board.  Being full of French volunteers and having the glamour of being the Queen's own regiment, this brought an allure to many adventurers keen to serve with them. The regiment was nowhere near as short of men as most units were.  The Guidon notably consists of Fleur-de-Lys.  They had a distinguished history and Google searches will bring up much fascinating reading about them. 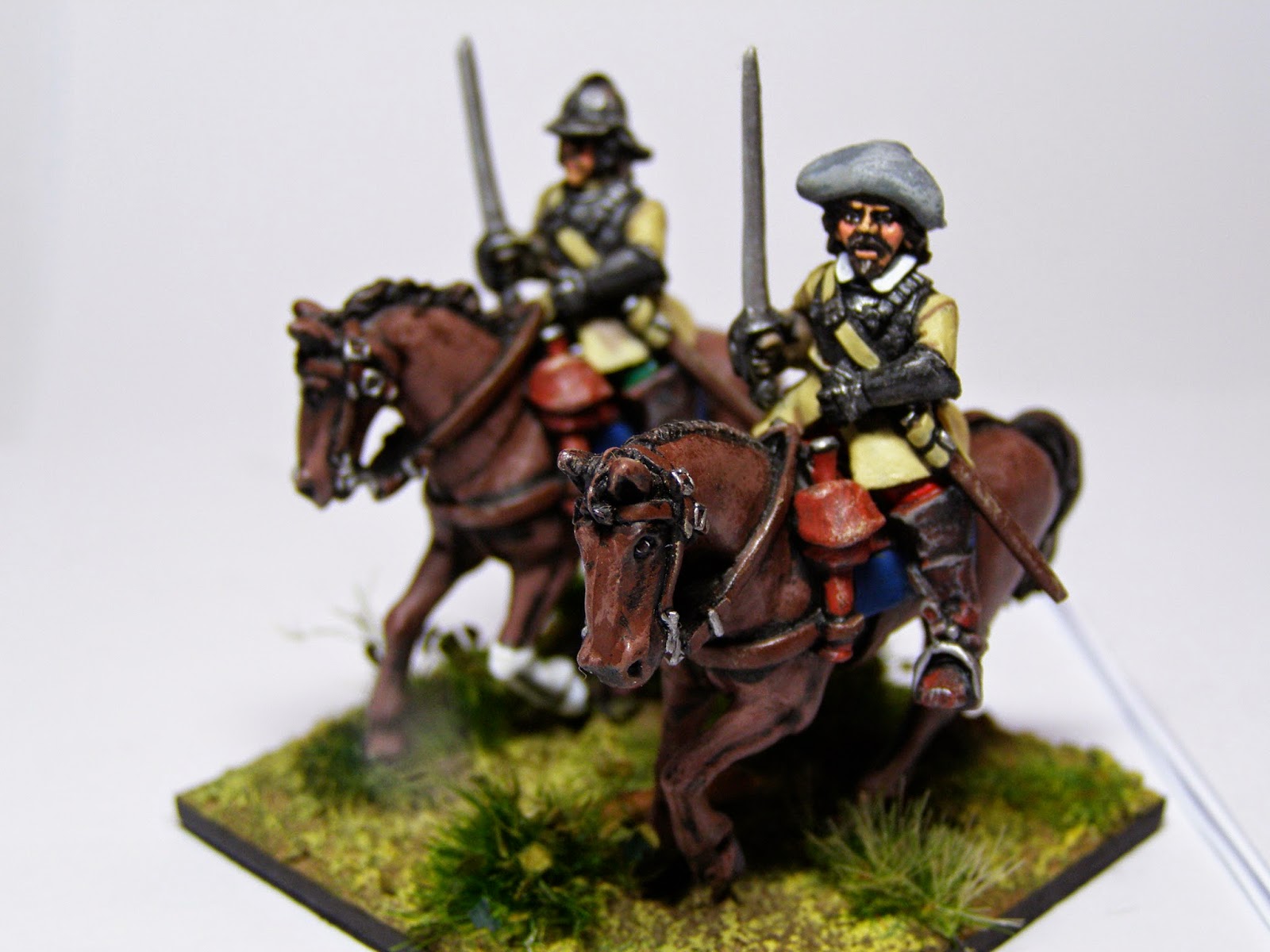 The figures are from the fabulous 28mm Bicorne range. 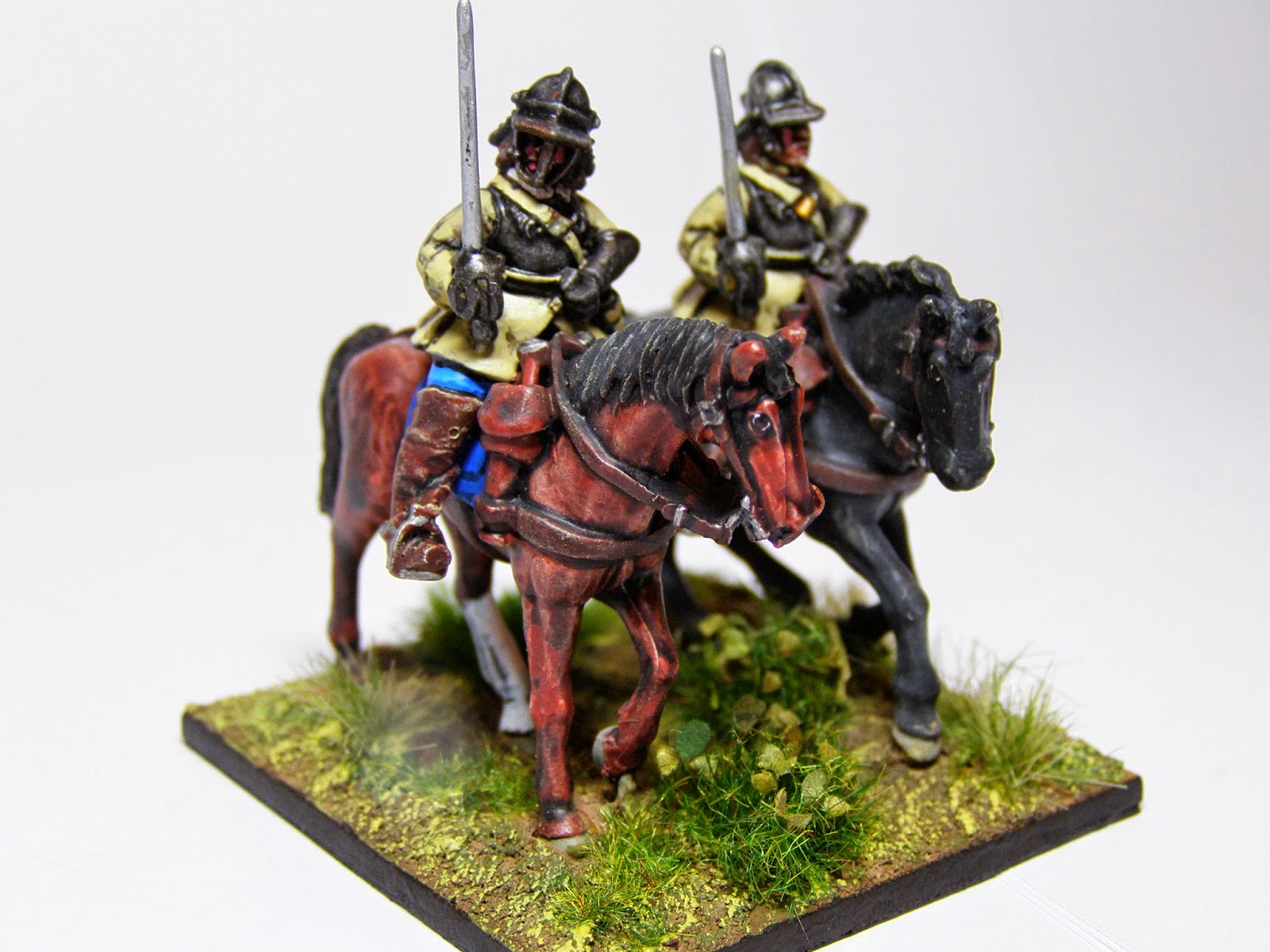 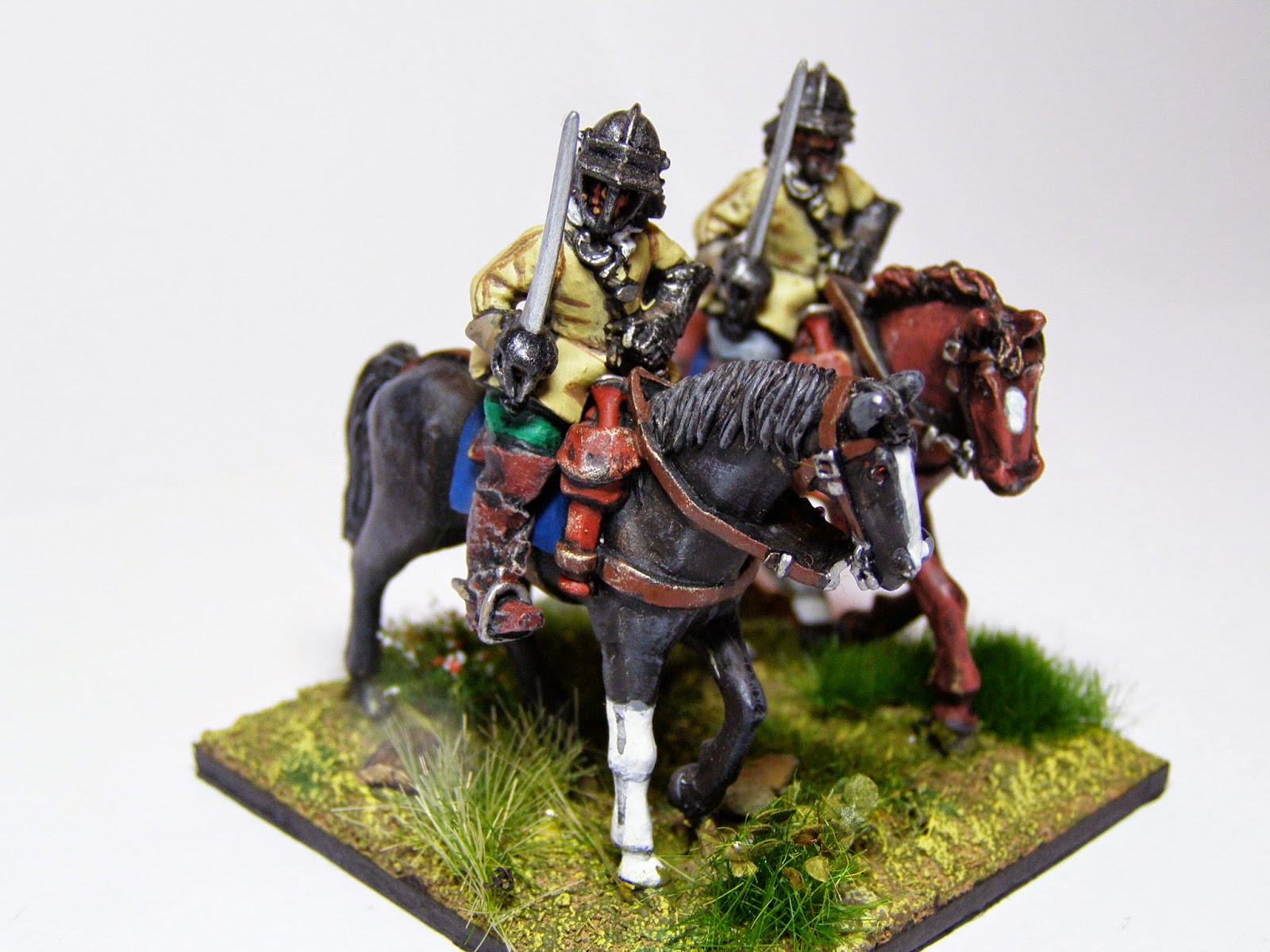 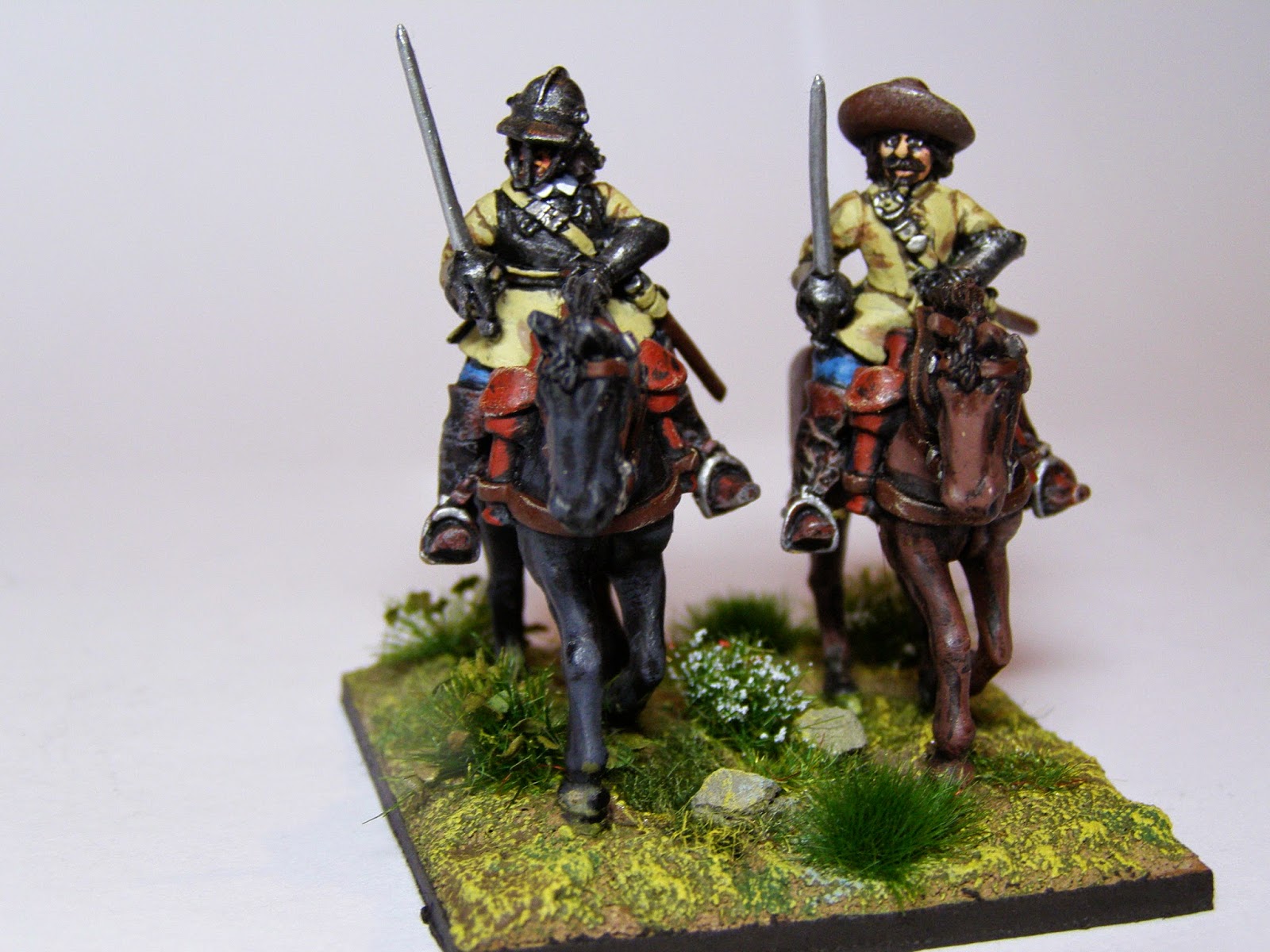 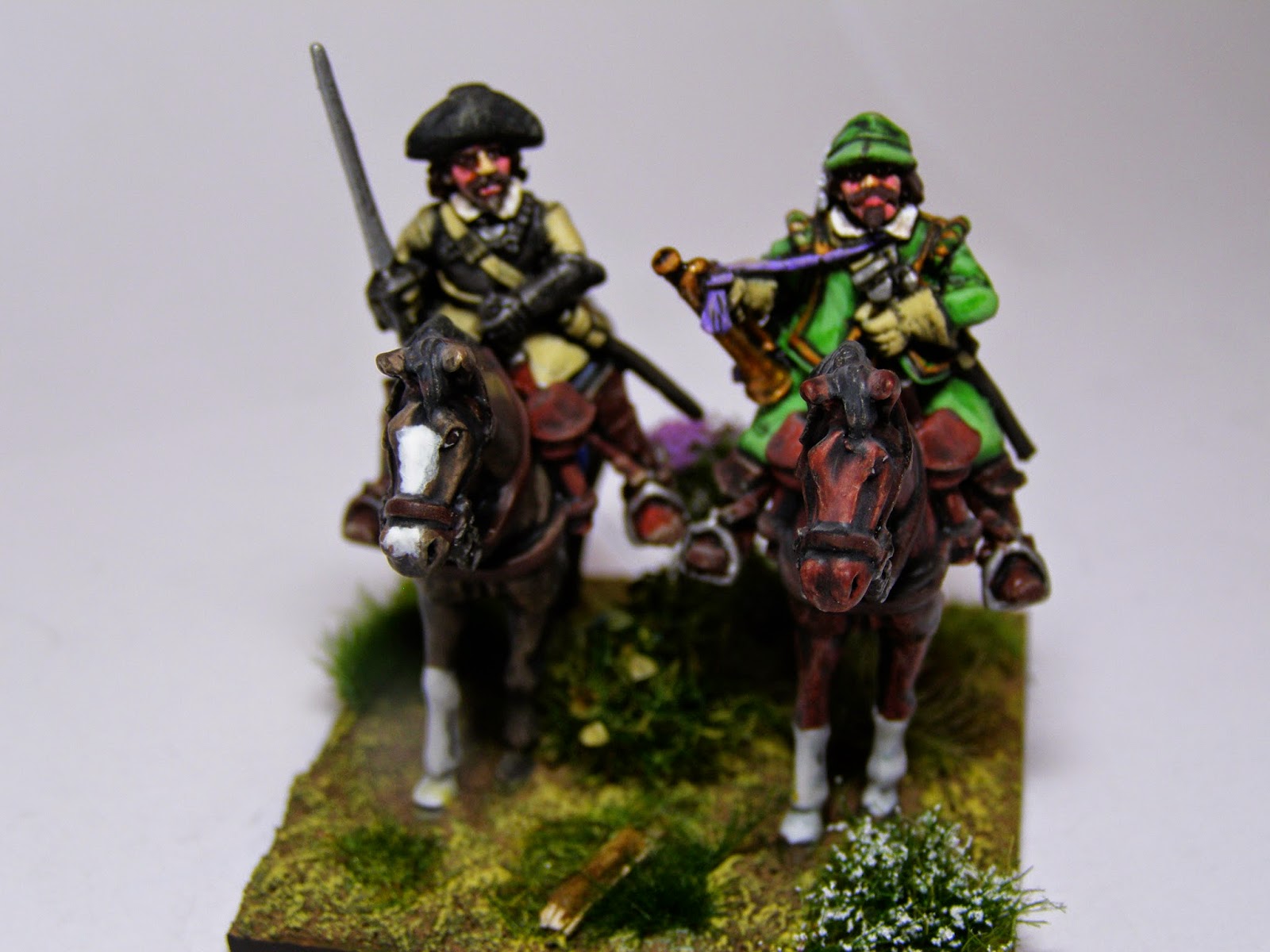 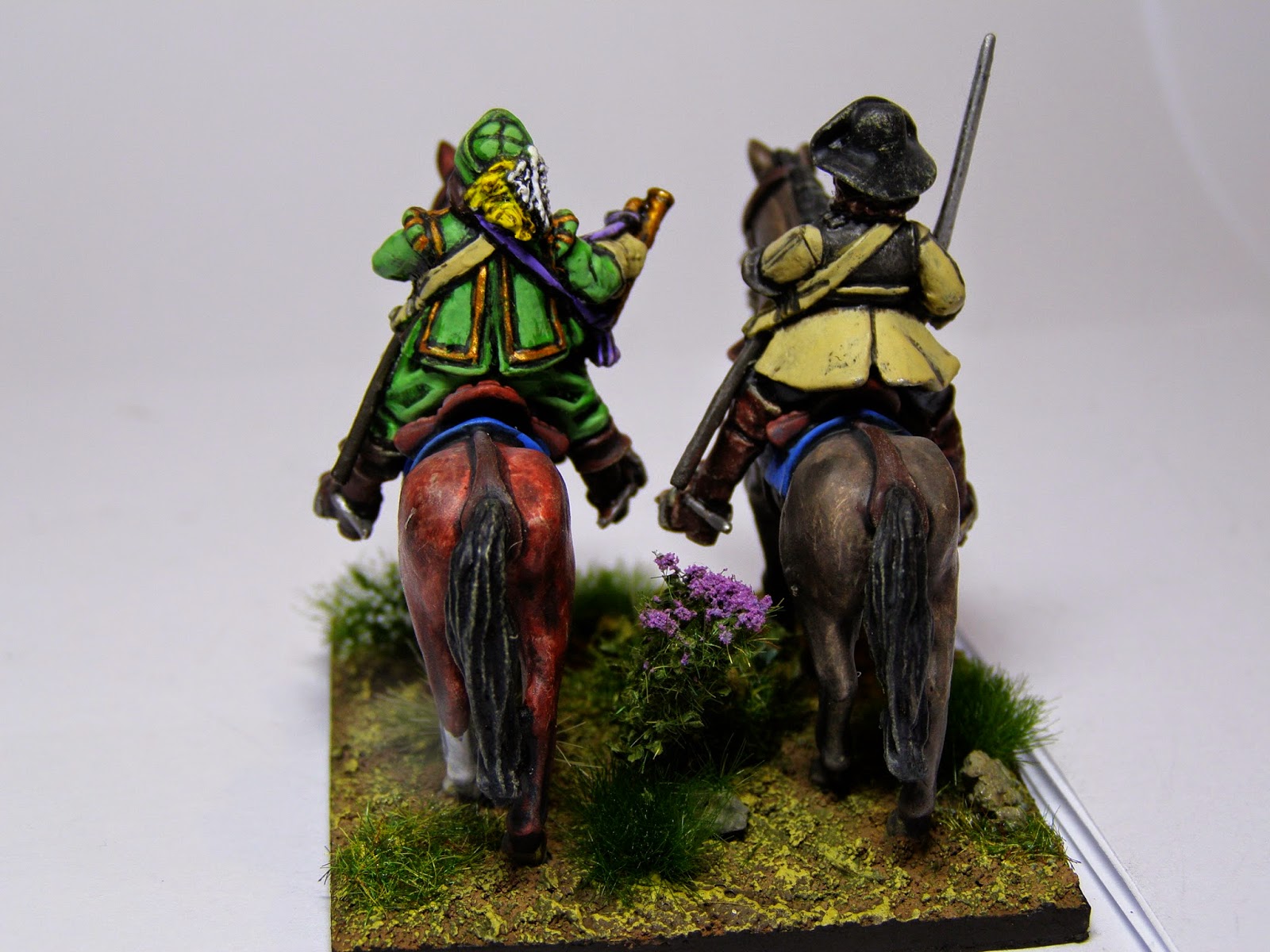 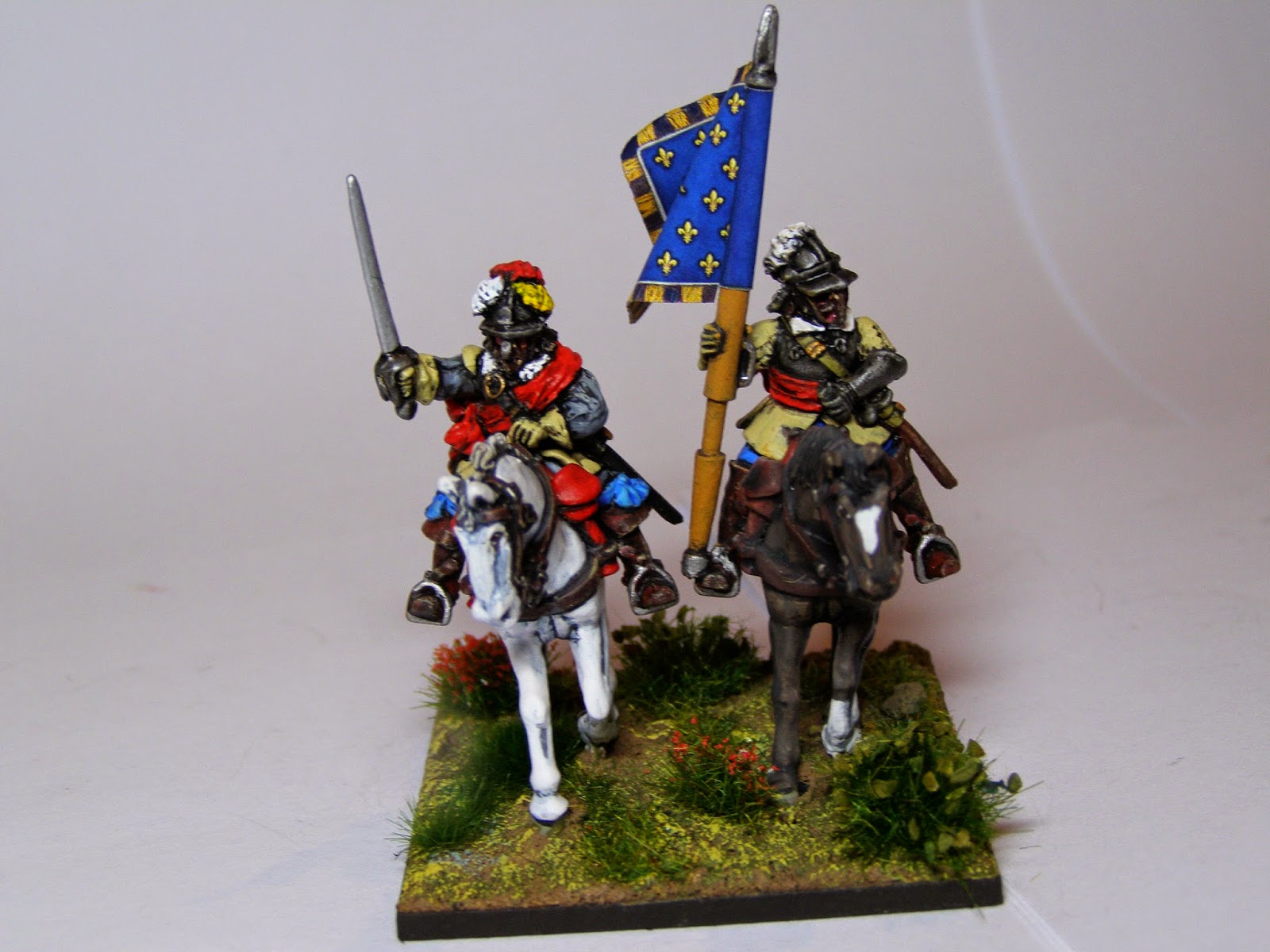 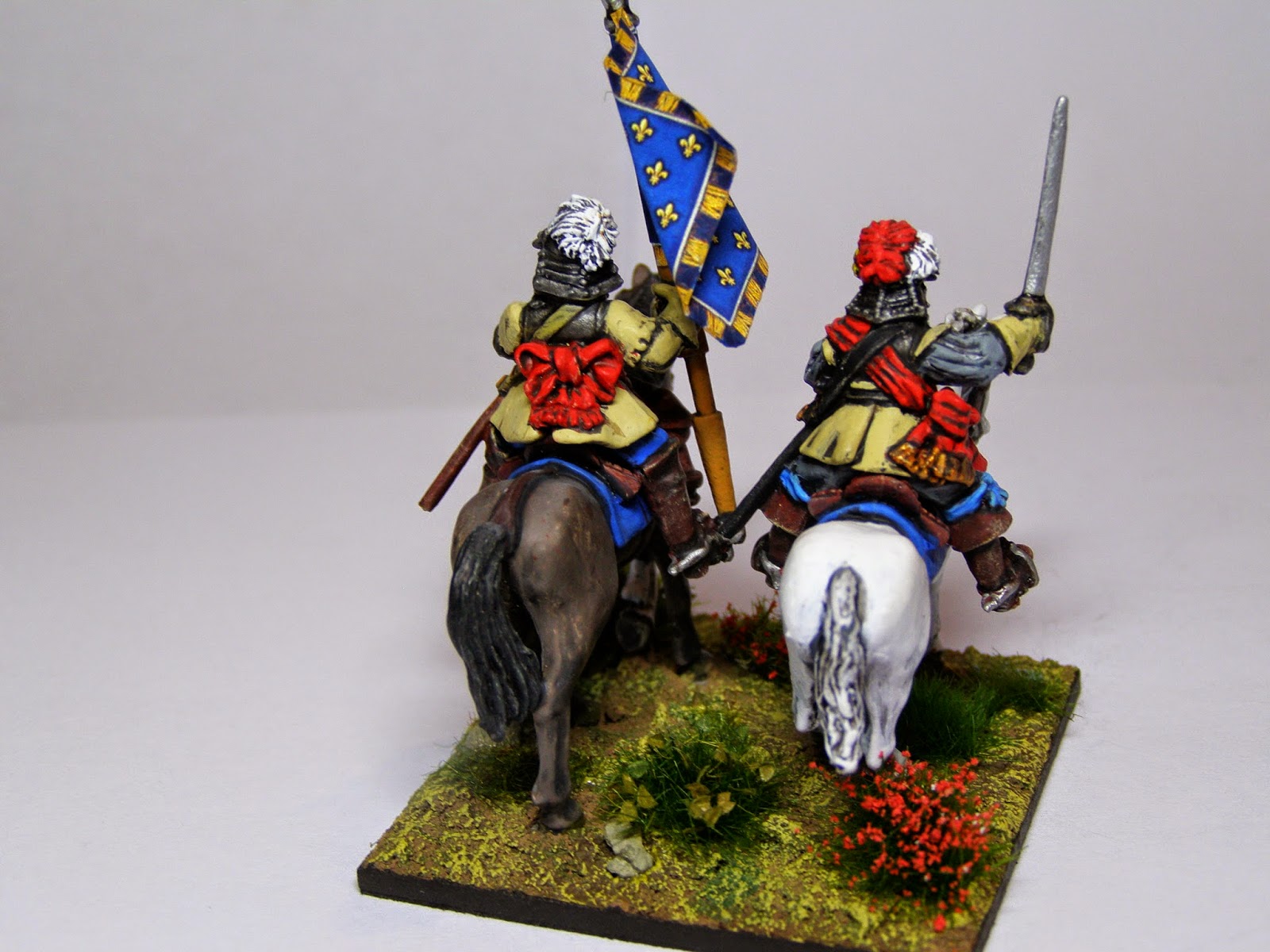 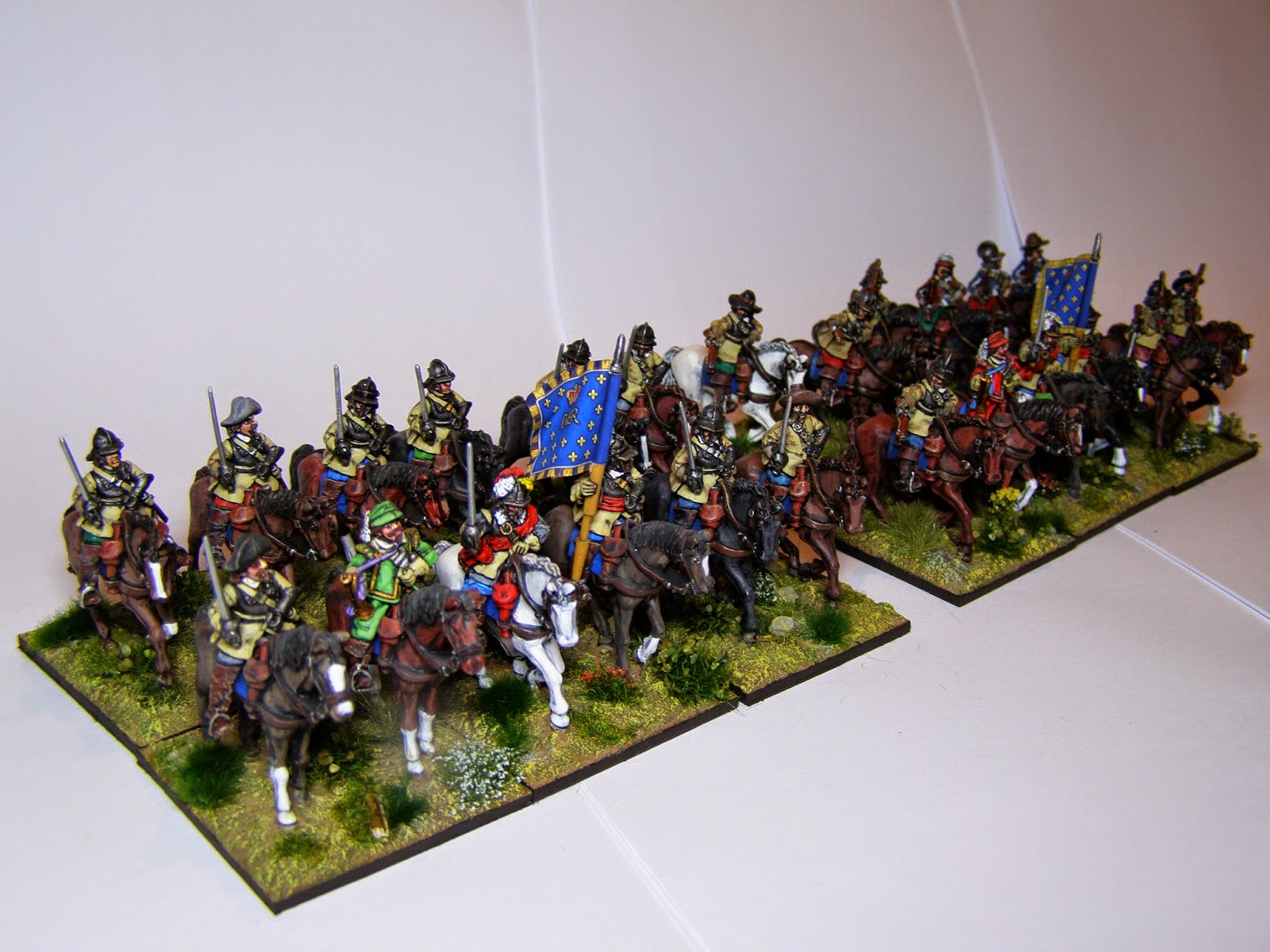 The whole regiment - a very imposing sight and one to fill the Parliamentarian player with dread!

My near-complete current project should be finished by the end of the week (hopefully!).  I must say though that driving past Edgehill today due to a road closure, giving me the first glimpse of the battlefield for a year or so, has set my thinking back on to the English Civil War.  It's amazing how the imagination races when one drives past a battlefield...a bit of historical inspiration is good for painting motivation,though it's less help when you are trying to paint a different period!
Posted by Jason at 23:10 6 comments: