The latest from my painting desk: T- 72 Tanks. 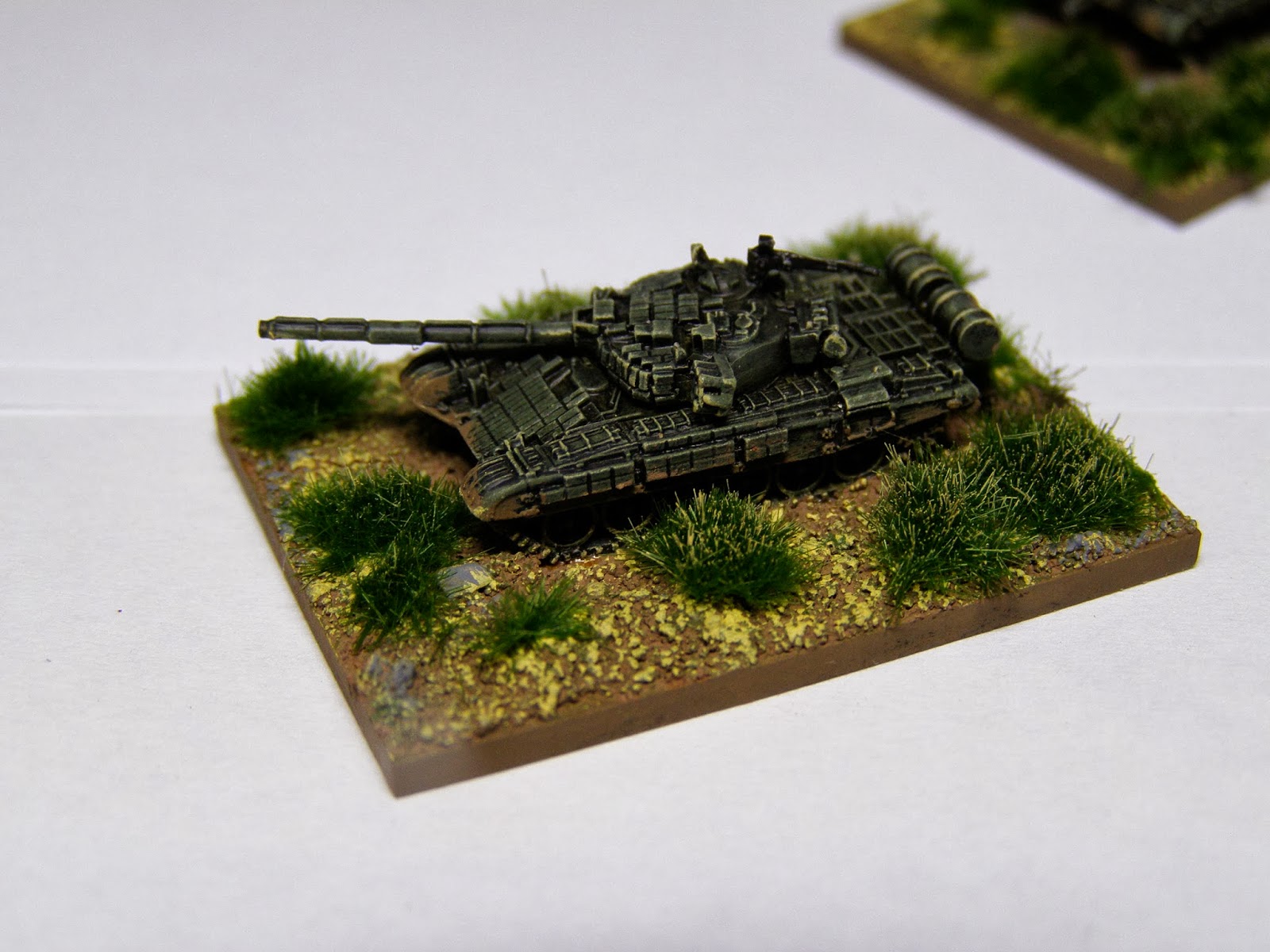 In fact 2 x Battalions worth of T-72 M1 tanks with reactive armour: 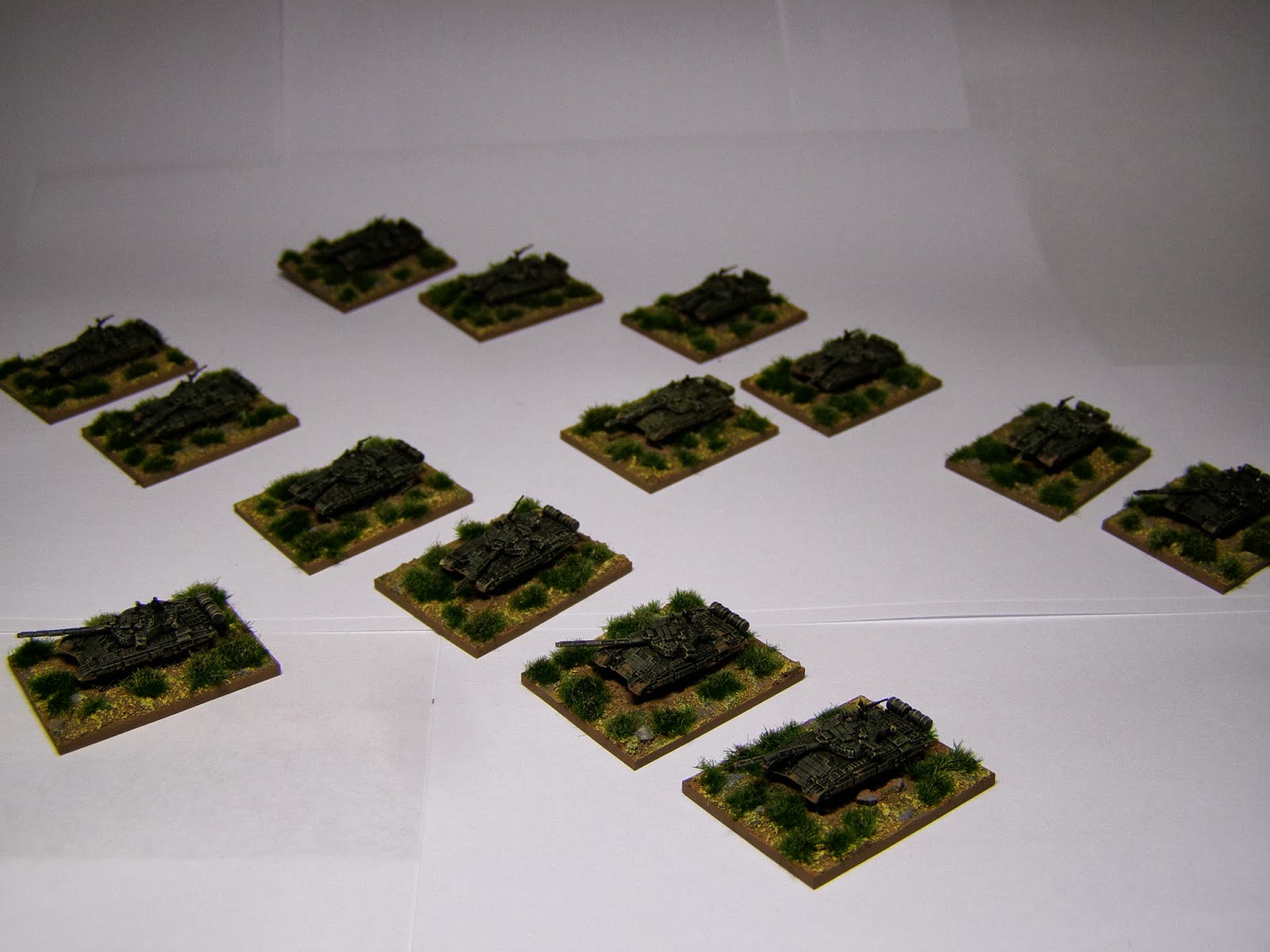 These are for my Soviet army for the Modern Spearhead rule-set. That's the plan anyway.  I have never actually played Modern Spearhead yet, but I have read some mightily impressive blog reports (including the posts by the very talented Aaron alias Prufrock at 'Here's no great matter' blog) which makes me think that the rules will give me all I am looking for in a large divisional sized action, with associated rules for helicopters, aircraft, and such nasties like CBRN weaponry (and even tactical nukes....hmmm might leave those in storage!).

To get a better picture of the Cold War in the mid-1980's, I'm also reading 'Air Battle Central Europe' By Alfred Price. A very interesting (if really scary) section is from the interview with the head of NATO's 2nd Allied Tactical Air Force, where he states that a war between East and West breaking out commencing with conventional weapons would have to turn nuclear within 3 to 4 weeks, primarily because all stocks of expensive bombs and conventional missiles having been expended! 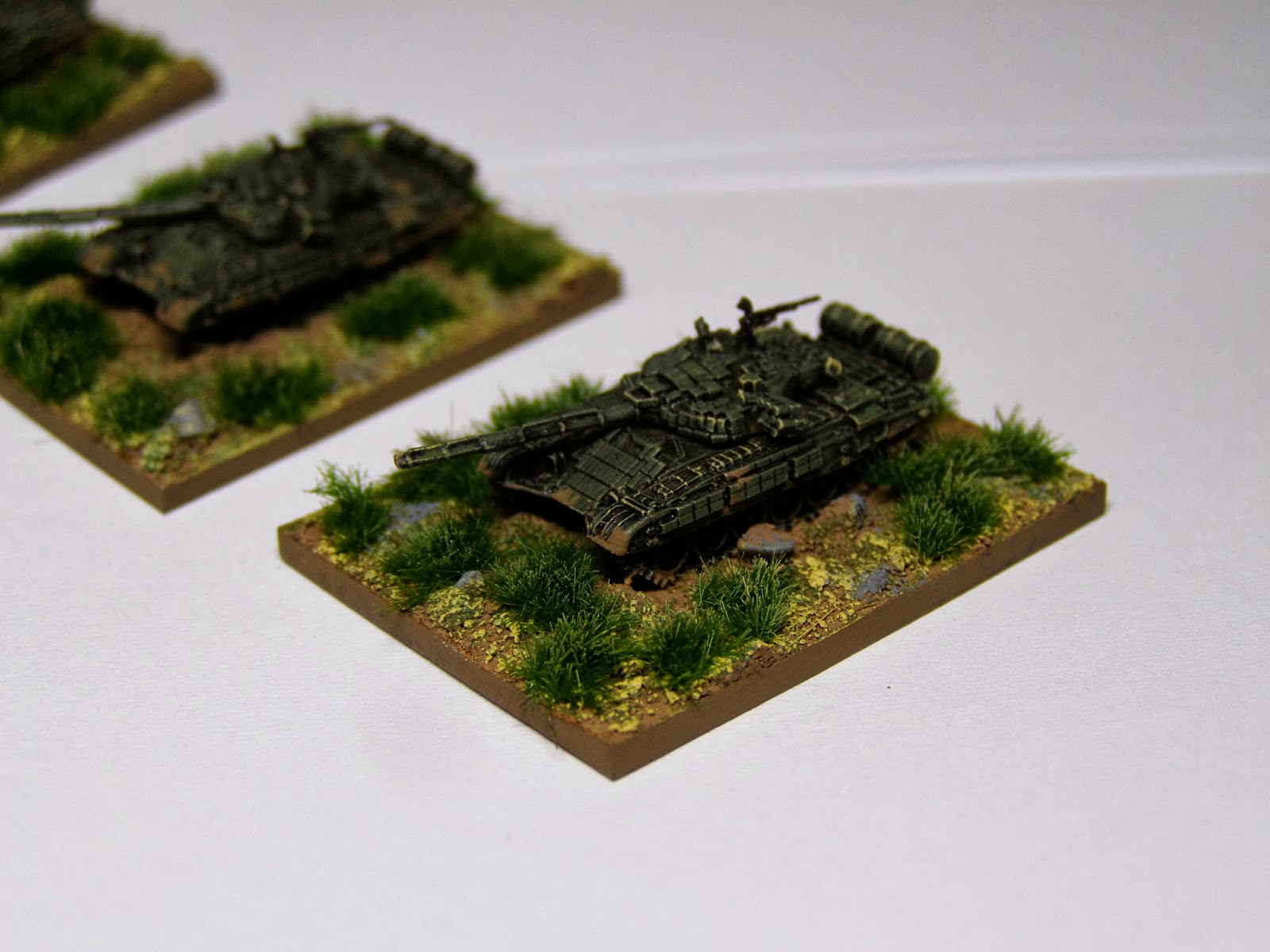 I'm now working on several battalions for the British Army of the Rhine so hopefully I can play test soon. Assembled already (I just couldn't wait!) is a Panavia Tornado and a SU-25 FROGFOOT. 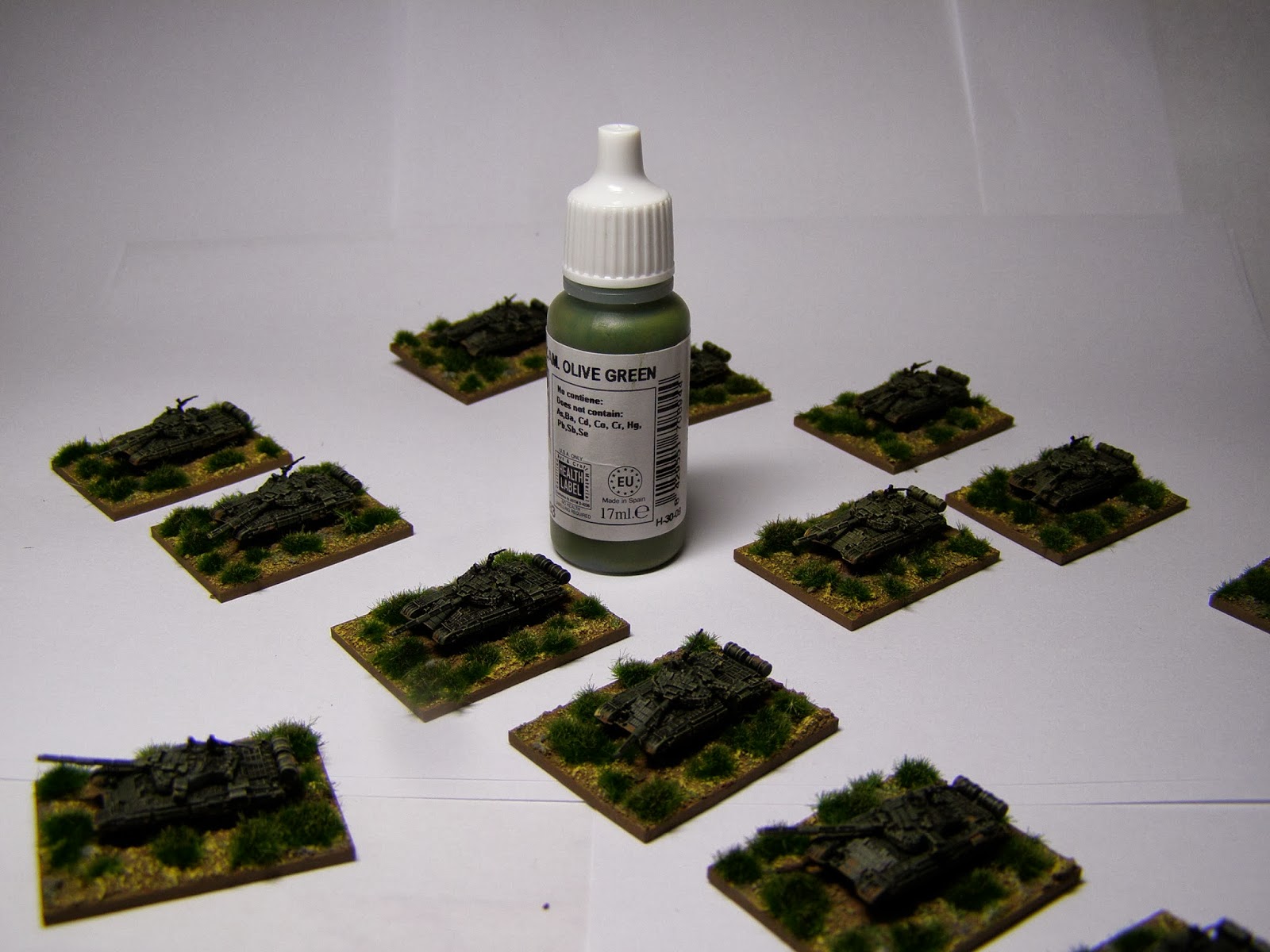 I couldn't resist doing another 'scale-shot'. This time with a Vallejo paint bottle to demonstrate how 1/285 looks again.  I should be able to get loads of armour in this scale on the board without it looking like a Napoleonic battle with tanks!

I think next months major purchase will be 1/285 scale buildings and roads. These will be in resin though so I shall skip the nice but expensive GHQ buildings. Having said that it's the 'Overlord' Wargaming show at Abingdon next Sunday so goodness knows what I'll come back with!
Posted by Jason at 22:54 2 comments: 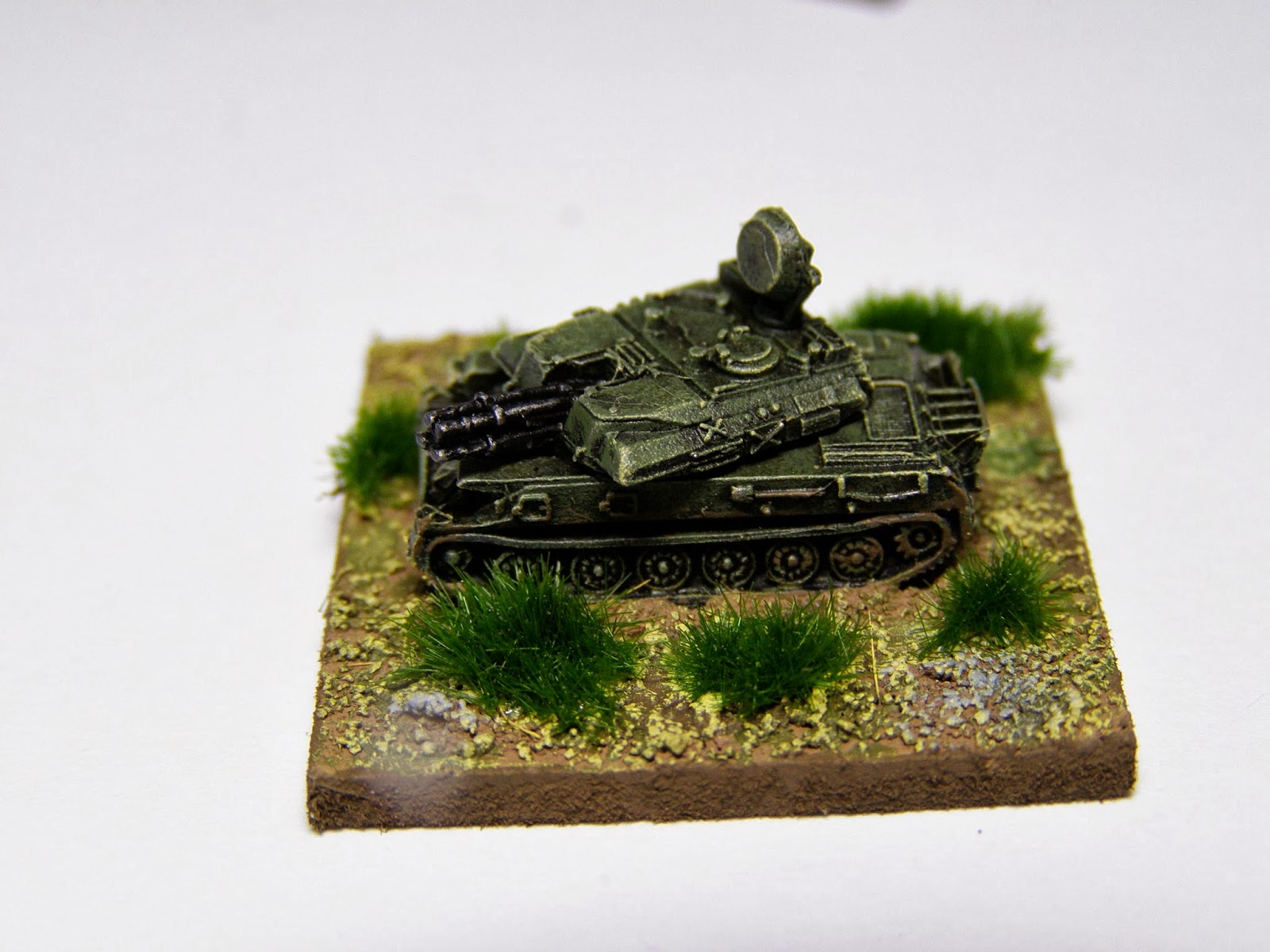 It's time for a change of historic period and this time it's quite a drastic one.  It's quite a move away from the Wars of the Roses!  I recently took the plunge and purchased 'Modern Spearhead'.  Having got the rules and read them through it was time to get the models. 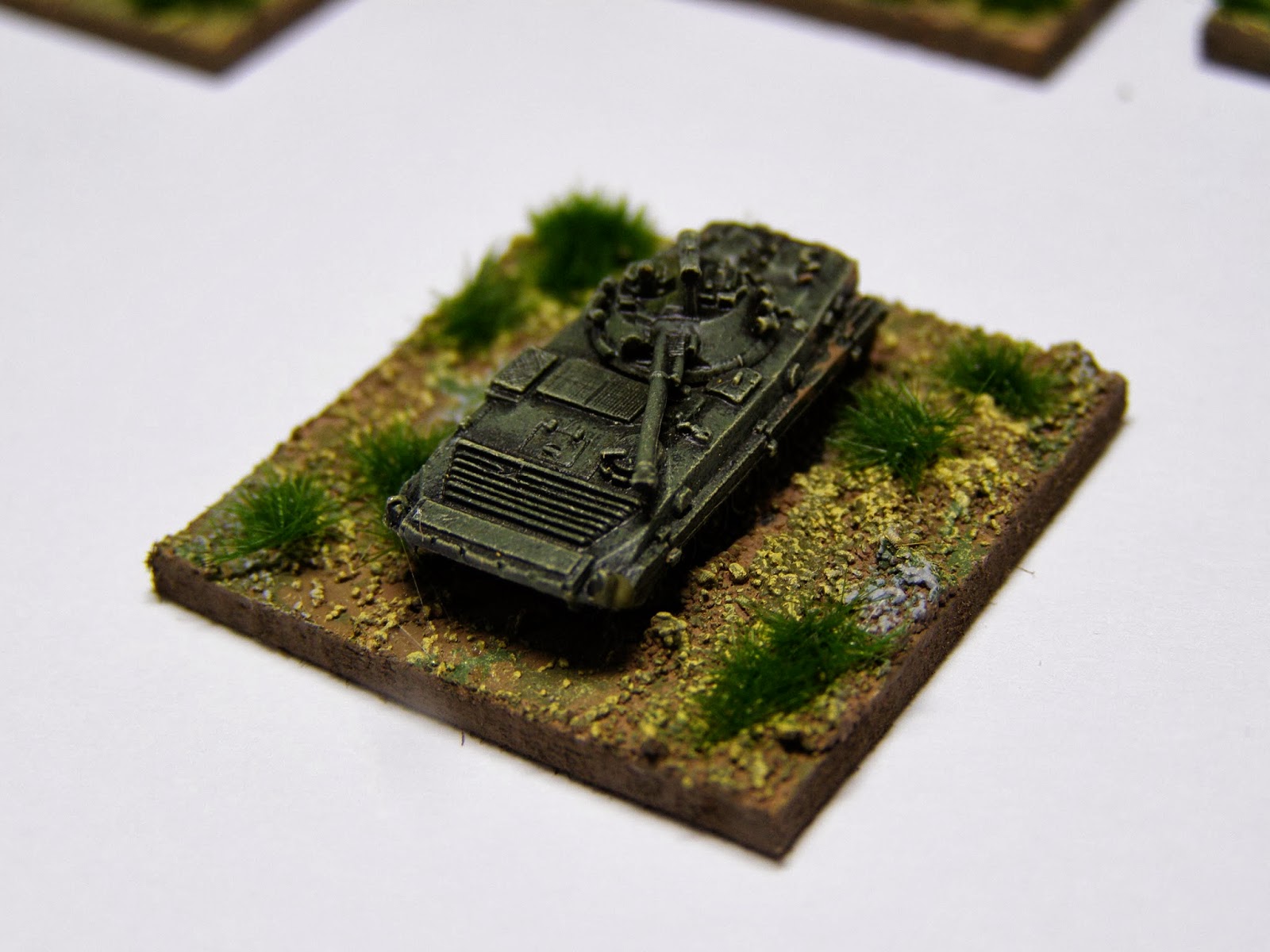 I decided to start off with a Soviet Armoured Regiment from the mid 1980's.  This had the added benefit of the Russians still using a plain green instead of camouflage (unless my sources are incorrect!).  So I thought that painting might be considerably easier with one basic colour.  I duly sent off a good sized order to Magister Militum and ordered the GHQ 1/285 vehicles.  I have to say how impressed I am with the amount of detail in such a small model. The sculptor must have eyes like a hawk! 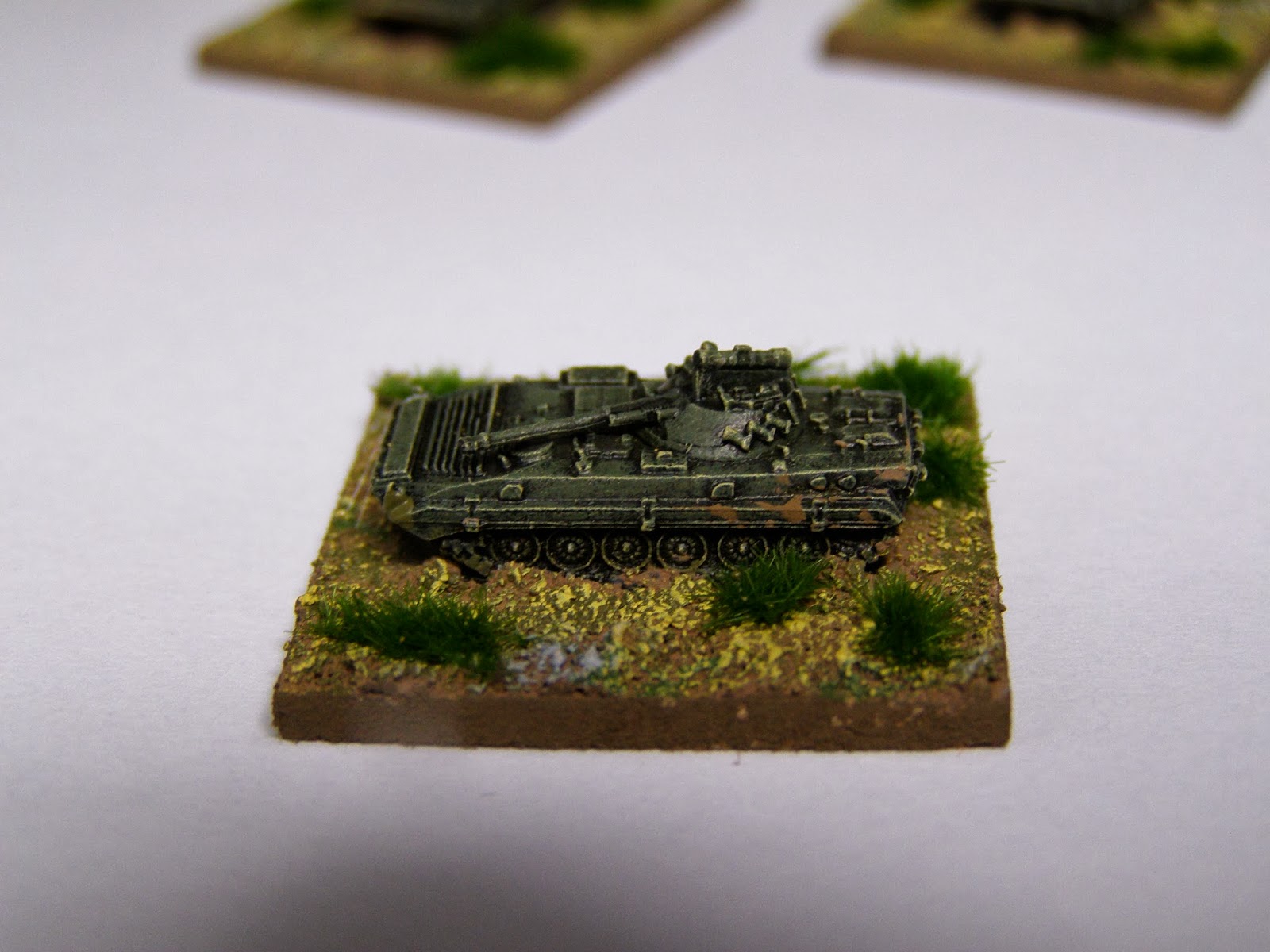 I was also impressed by how little flash there was on the model.  Just a little scraping with a sharp scalpel and I had prepared a BMP Motor Battalion in no time at all. 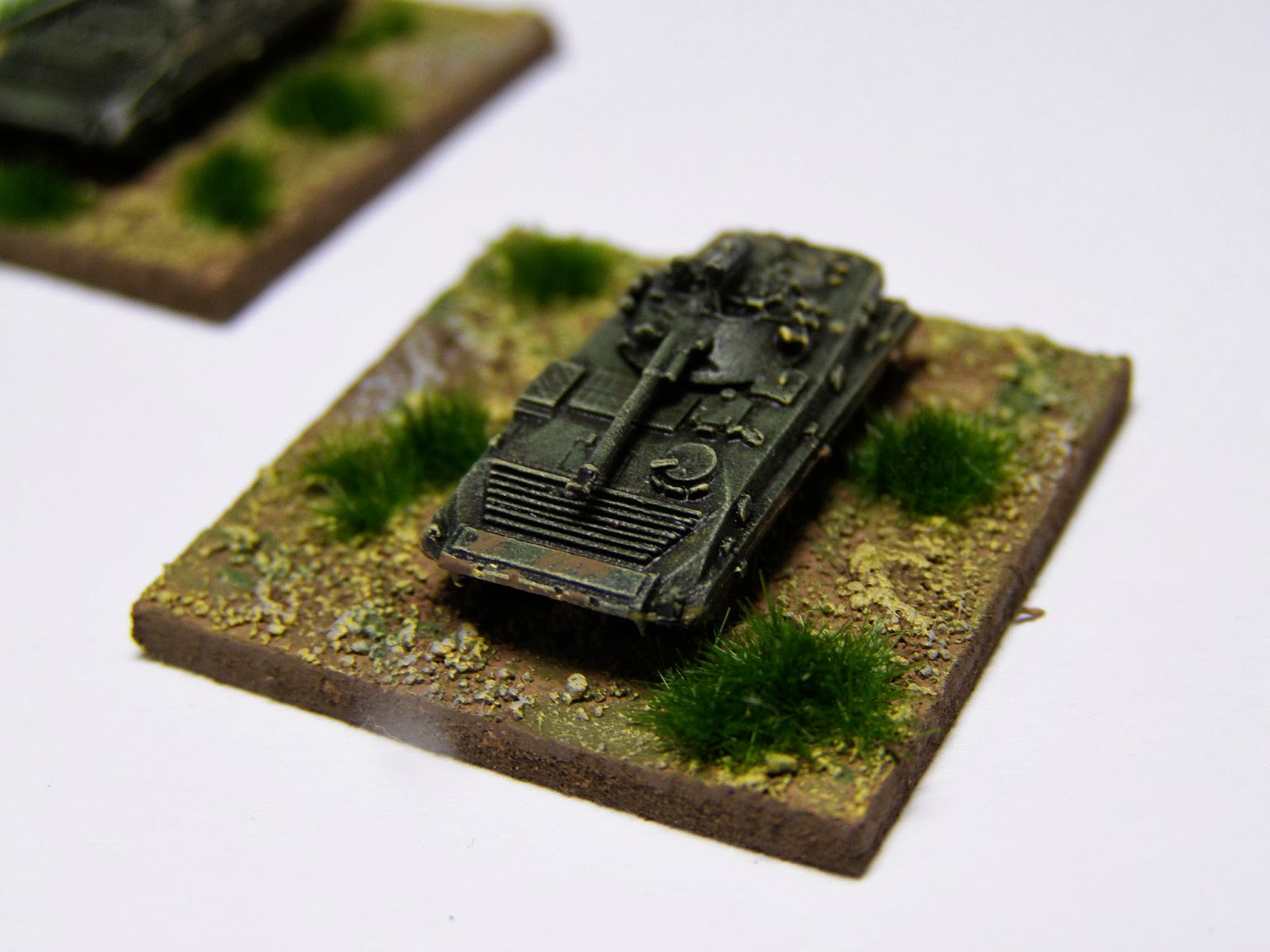 Just like a Soviet Red Square parade - Another BMP-2

I used a painting method shown in the handy GHQ catalogue which came with my order.  I used a base coat of the main colour without highlighting. I used a grey for the tracks.  A liberal coating of a thin black ink wash was applied all over.  When dry this was followed by the main colour applied again with a buff added to lighten the tone for the scale.  A dry brush of buff picked out the details and then I painted the details such as shovels, cables, worn metal work.  Some further weathering with mud etc followed that prior to varnishing. 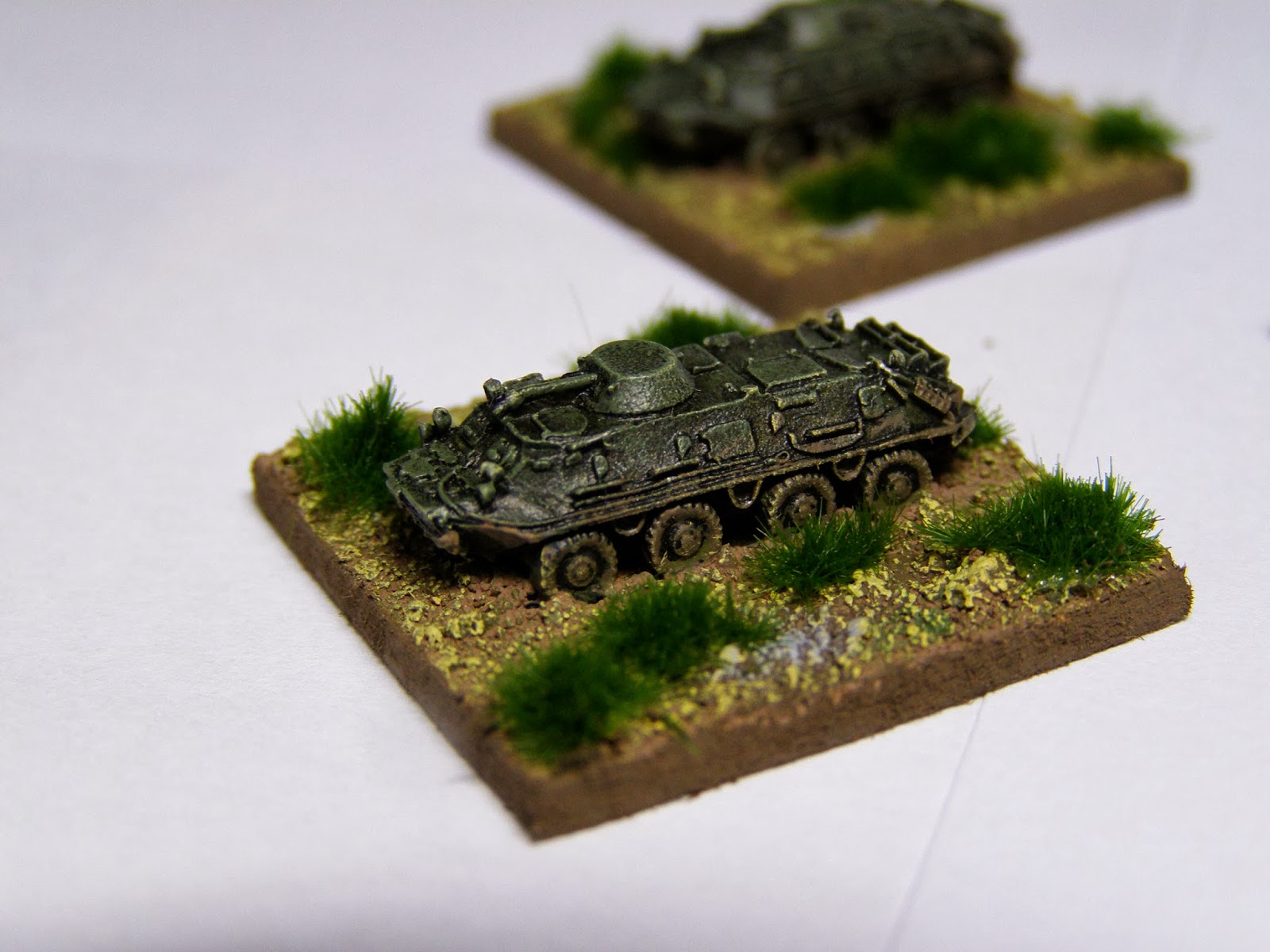 
I used 30mm by 30mm bases for these though I have since rebased some T-72s on longer 40mm x 30mm bases so the gun was not so exposed to bending/damage. 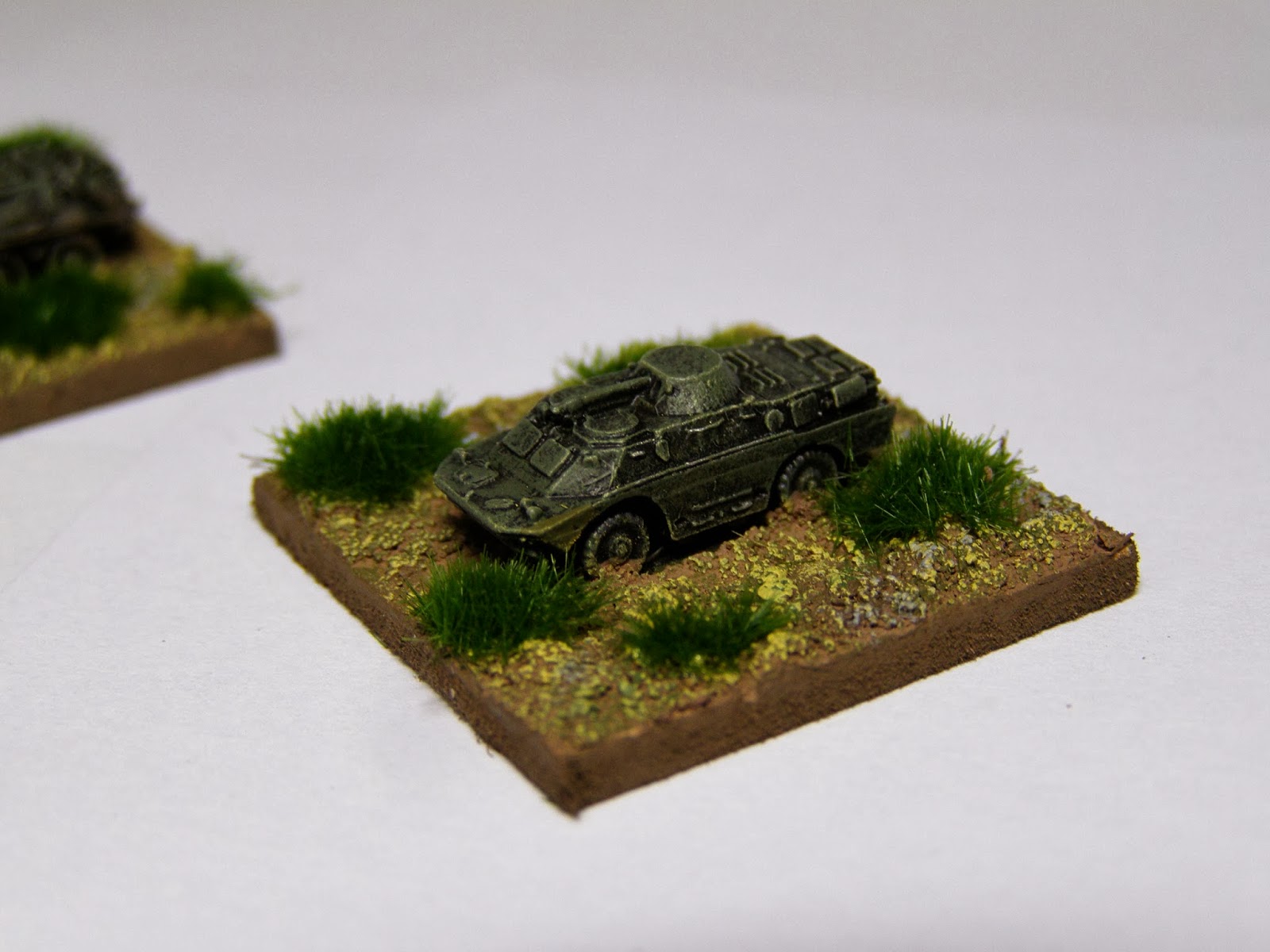 I used some of the grass patches which I had always thought looked too 'lawn-cut' for my 28mm figures. I'm very happy with how they look with 1/285 vehicles - so I can now use the box of grass patches again. 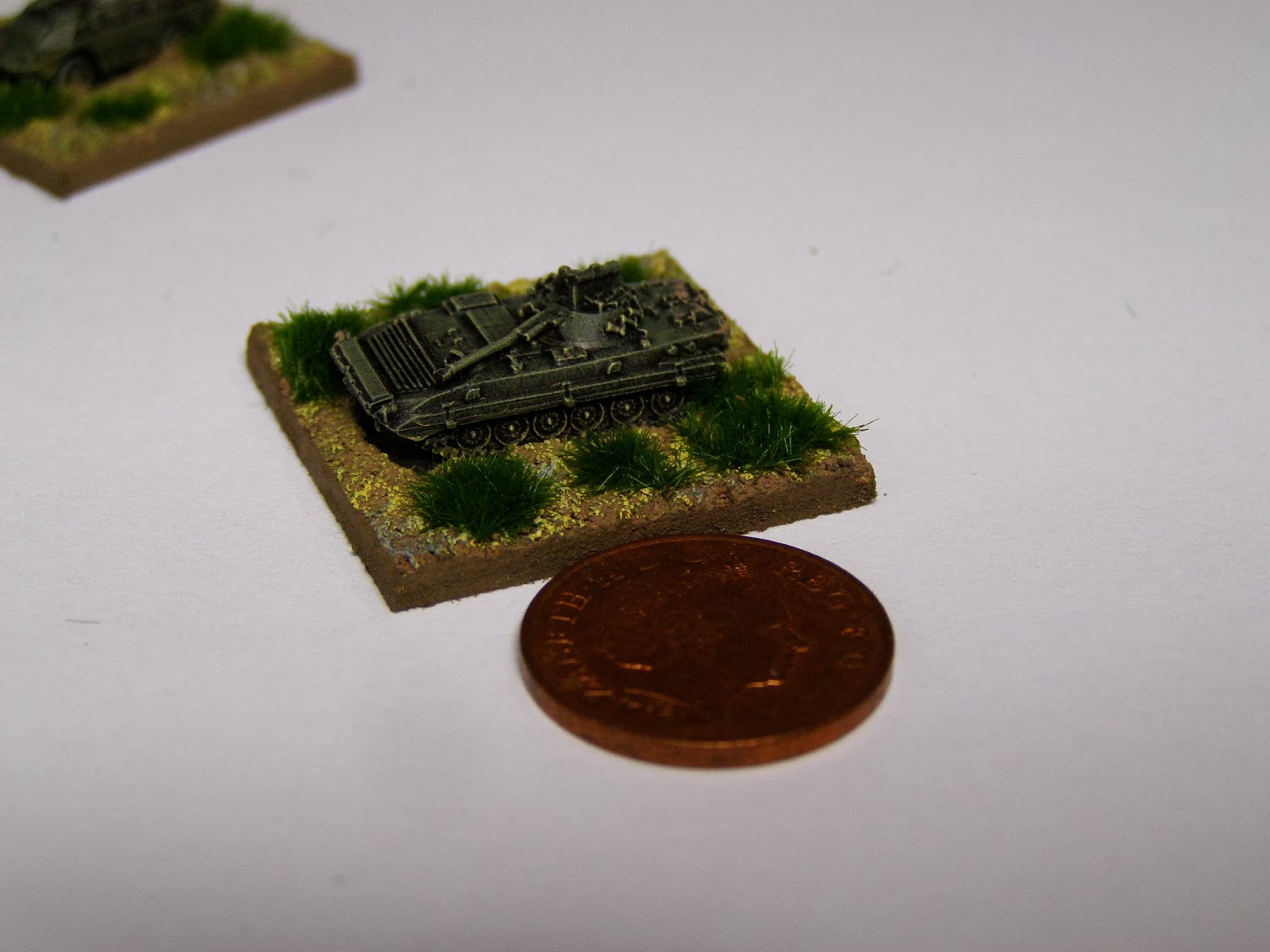 I find it is always easy to forget just how small 1/285 is.  I usually paint up 28mm figures so this is really quite a departure for me.  The one penny piece next to the vehicle illustrates just how much detail the sculptor achieved in such a small model. Under the base markings

Each model will represent a platoon in Modern Spearhead. I have yet to finish labelling up unit details.  The main reason is that I was planning to cover the NORTHAG area of operations in Northern Germany and have the Soviets as 3rd Shock Army.  However, having placed an order of T-72s, I then discovered that 3rd Shock Army was probably completely equipped with a variant of the T-80.  This has thwarted my plans somewhat, so I need to find out if and what reserve divisions might have had T-72 (I knew I should have stuck to painting Romans!). 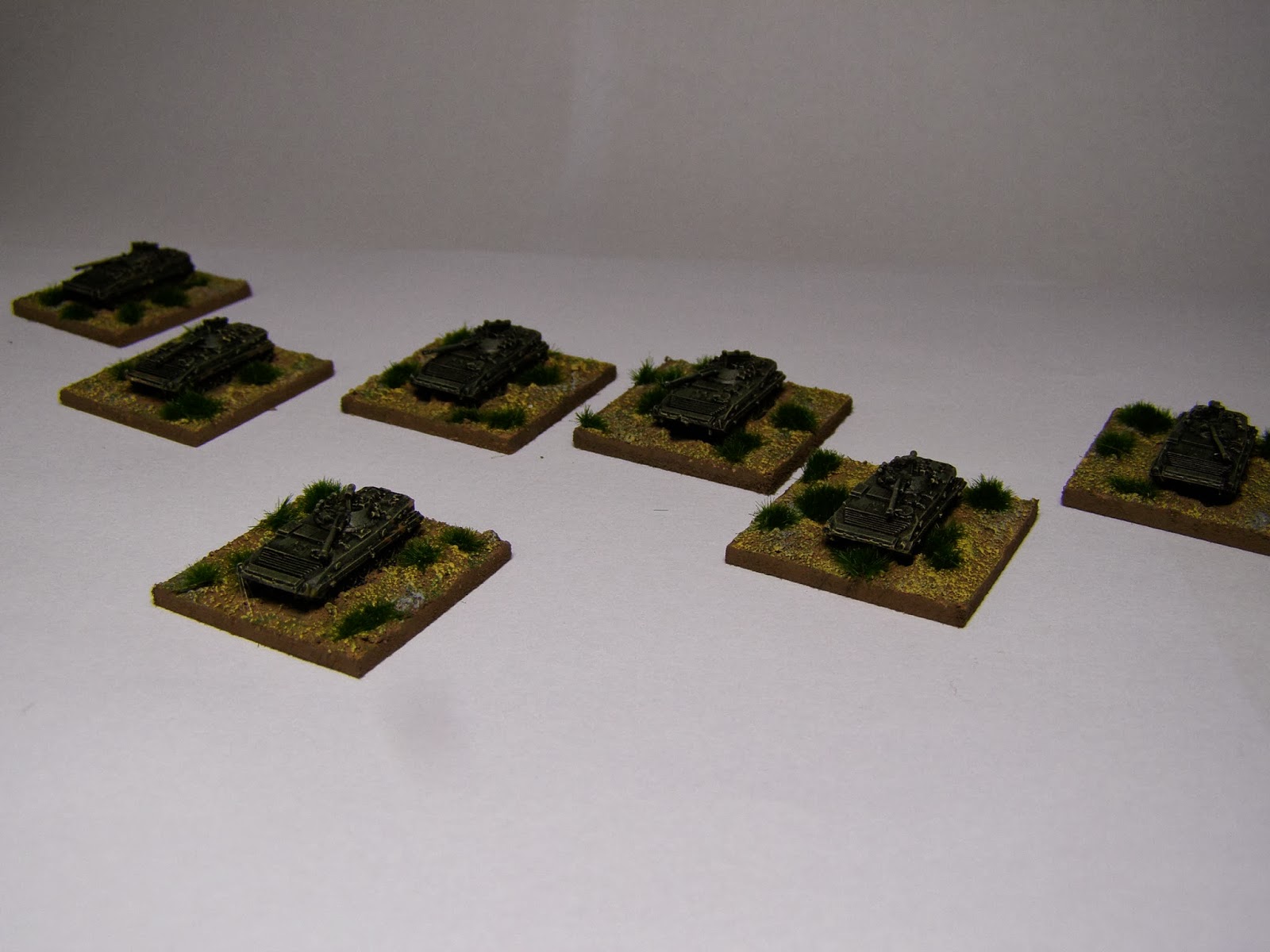 I'm really looking forward to getting to grips with Modern Spearhead and fielding very large formations on the table.  I find I learn new rules best with a few solo play-tests, so with a few units a side and I should get things moving.  I'll post my progress here as things develop.

War of the Roses Vignettes and Markers - Perry Miniatures 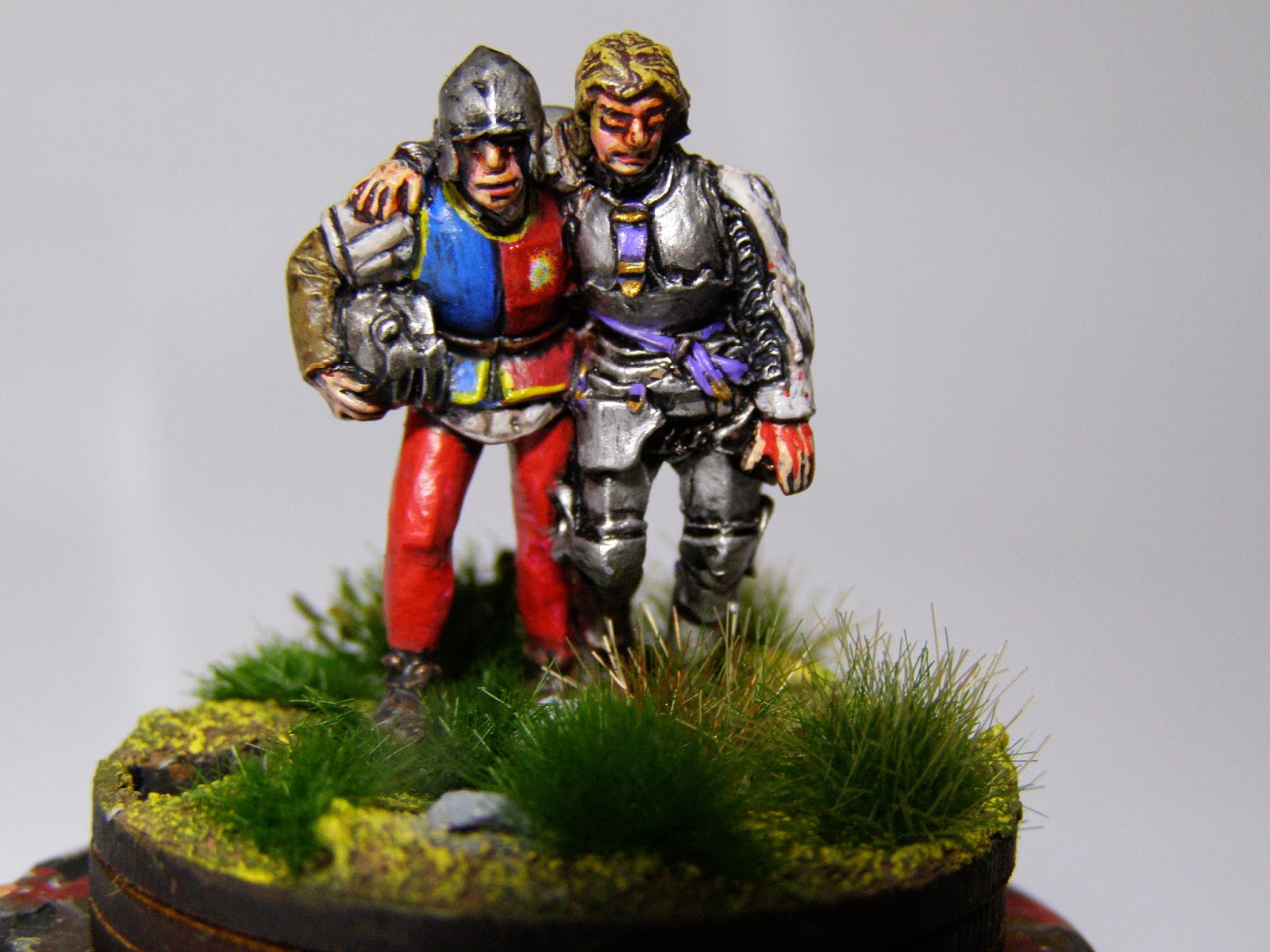 I didn't intend painting these chaps straight away when I ordered them, but when I opened the boxes I just couldn't resist getting the paints out.  In truth the paints were already out - I was halfway through a project but I stopped and put that project aside while I did these. 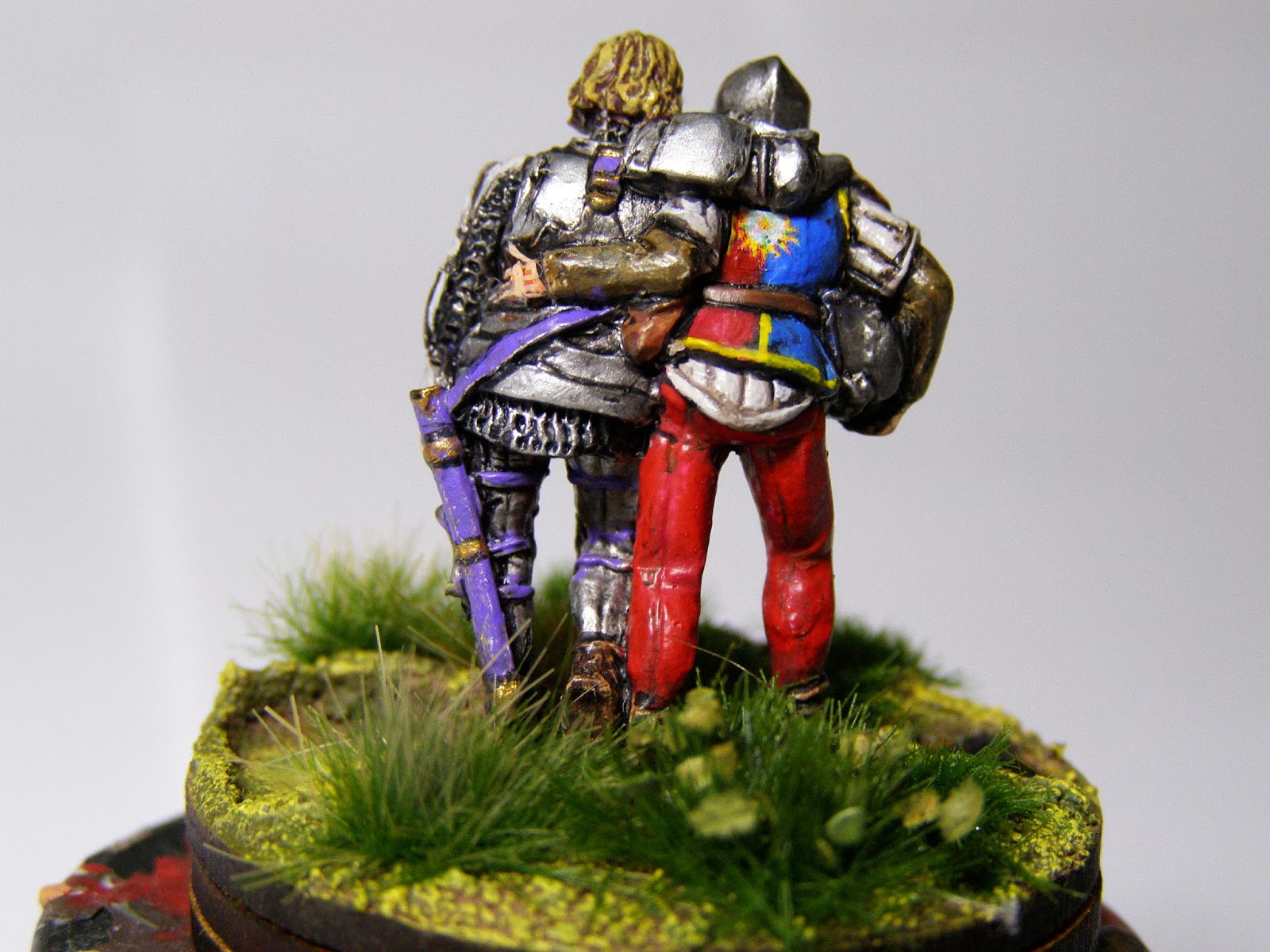 Simply being marker stands I should have wasted minimal time and just used washes and quick methods to complete them, but I just couldn't help using my normal more labour intensive techniques to see how they would look.  The sculpts just deserved the attention.  The pair of figures above (with helper in Edward IV's livery) was particularly rewarding to paint up. I thought the sculpting entirely believable - it just looks right! The wounded man-at-arms with his armour missing from his wounded left arm being helped away by a foot soldier from his own contingent could have come from a painting.  I did another pair with the helper in Warwick's livery which follows further on. 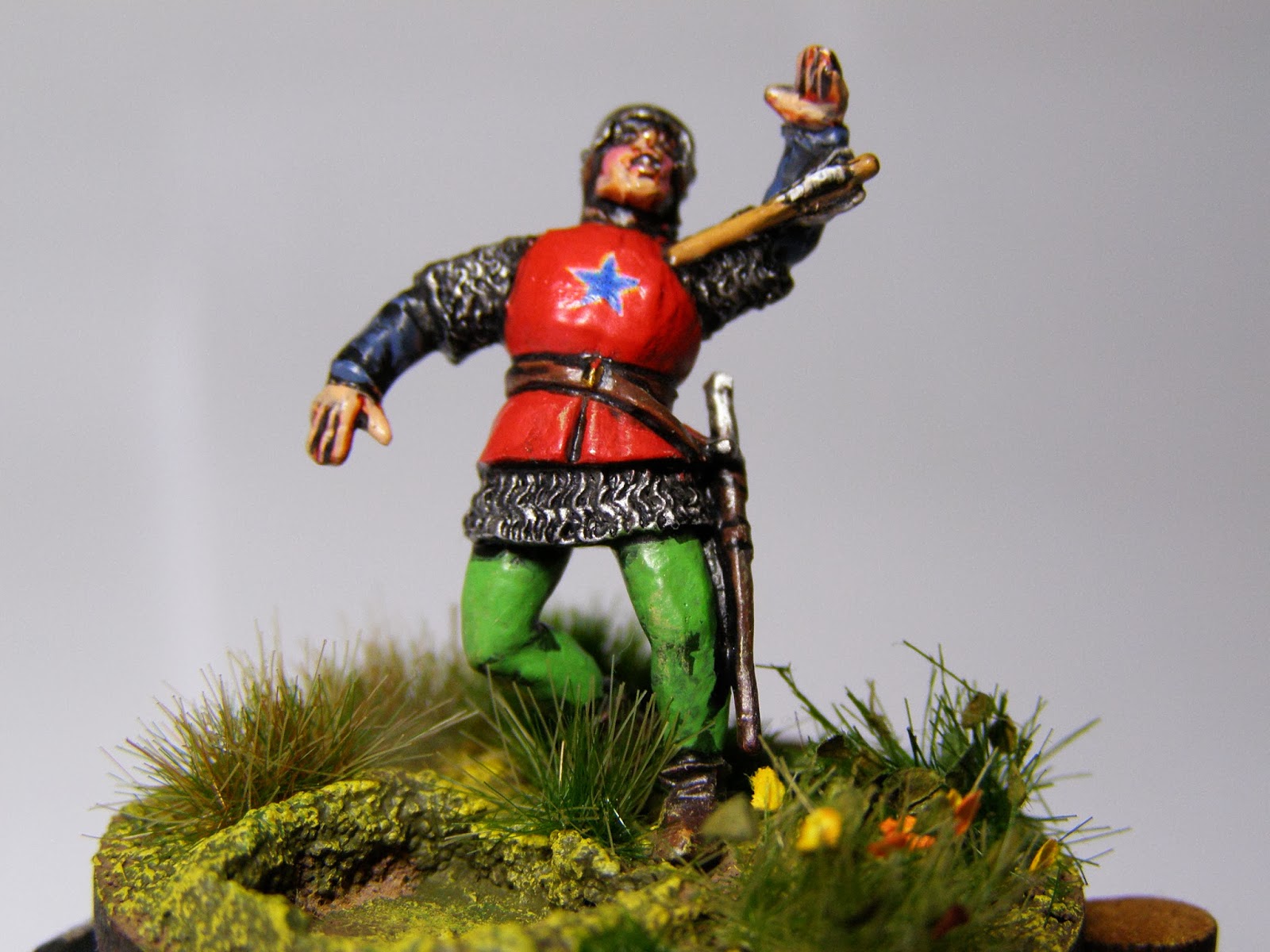 This unfortunate chap is another from the Perry's casualty pack.  This fellow from the Earl of Oxford's contingent has caught a longbow arrow.  I struggled with slight gloss sheen under the bulb with these photos. My previously most-trusted matt varnish has become unreliable.  I am still looking for the ideal paint-on matt varnish.  All of the figures shown in the post are from the Perry's War of the Roses metal range. 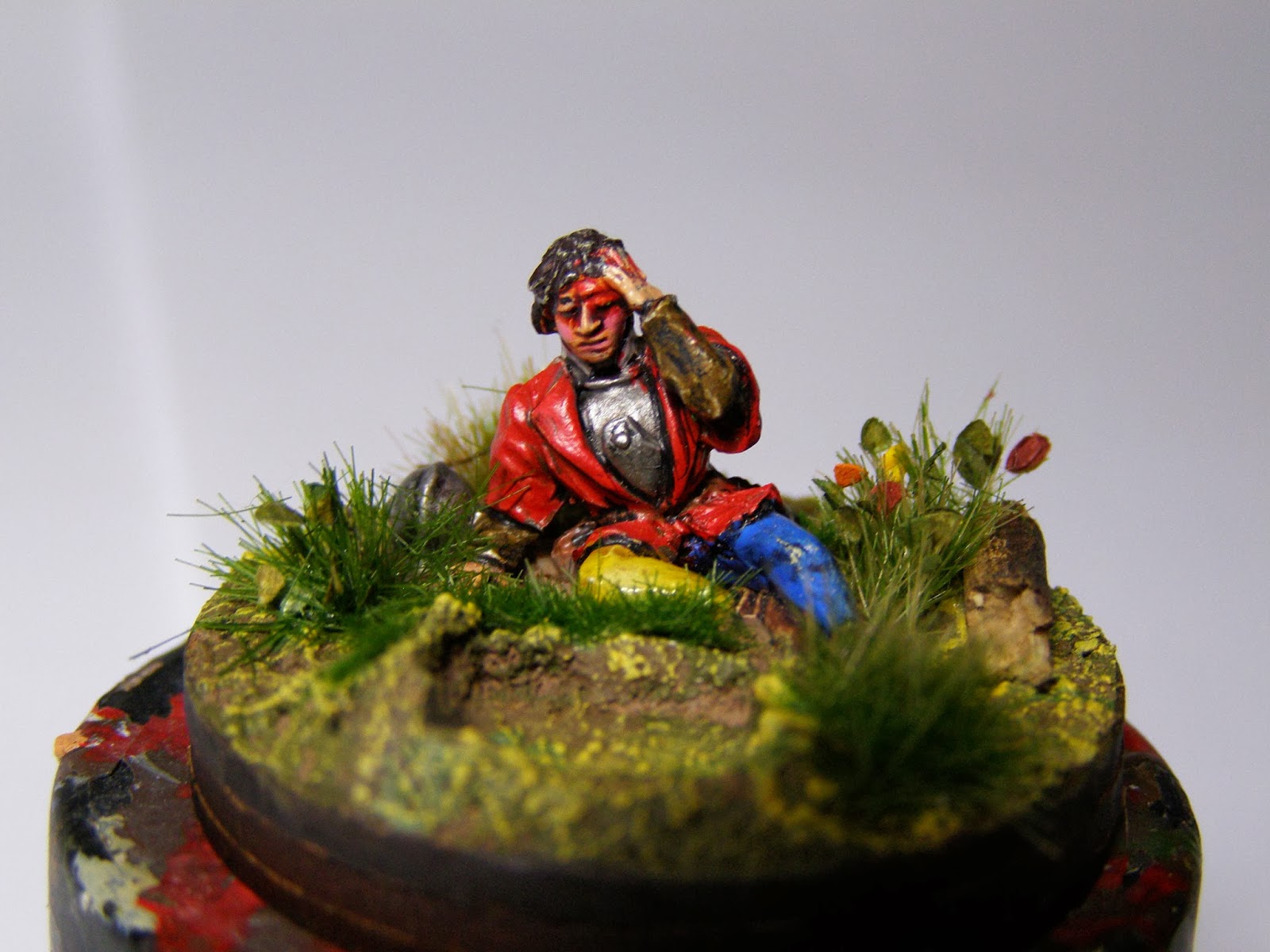 The figures are based on casualty bases made by 'Warbases'.  These are MDF and use a dial system to show the number of casualties.  I previously used the plastic bases by Forgeworld for their game 'Aeronautica Imperialis' but for reasons best known to themselves and Games Workshop, they axed their entire range and accessories.  The Forgeworld plastic bases were perfect for me as they had two dials.  Thus when playing Hail Caesar, I could keep track of Stamina and the Excess casualties on the same base. 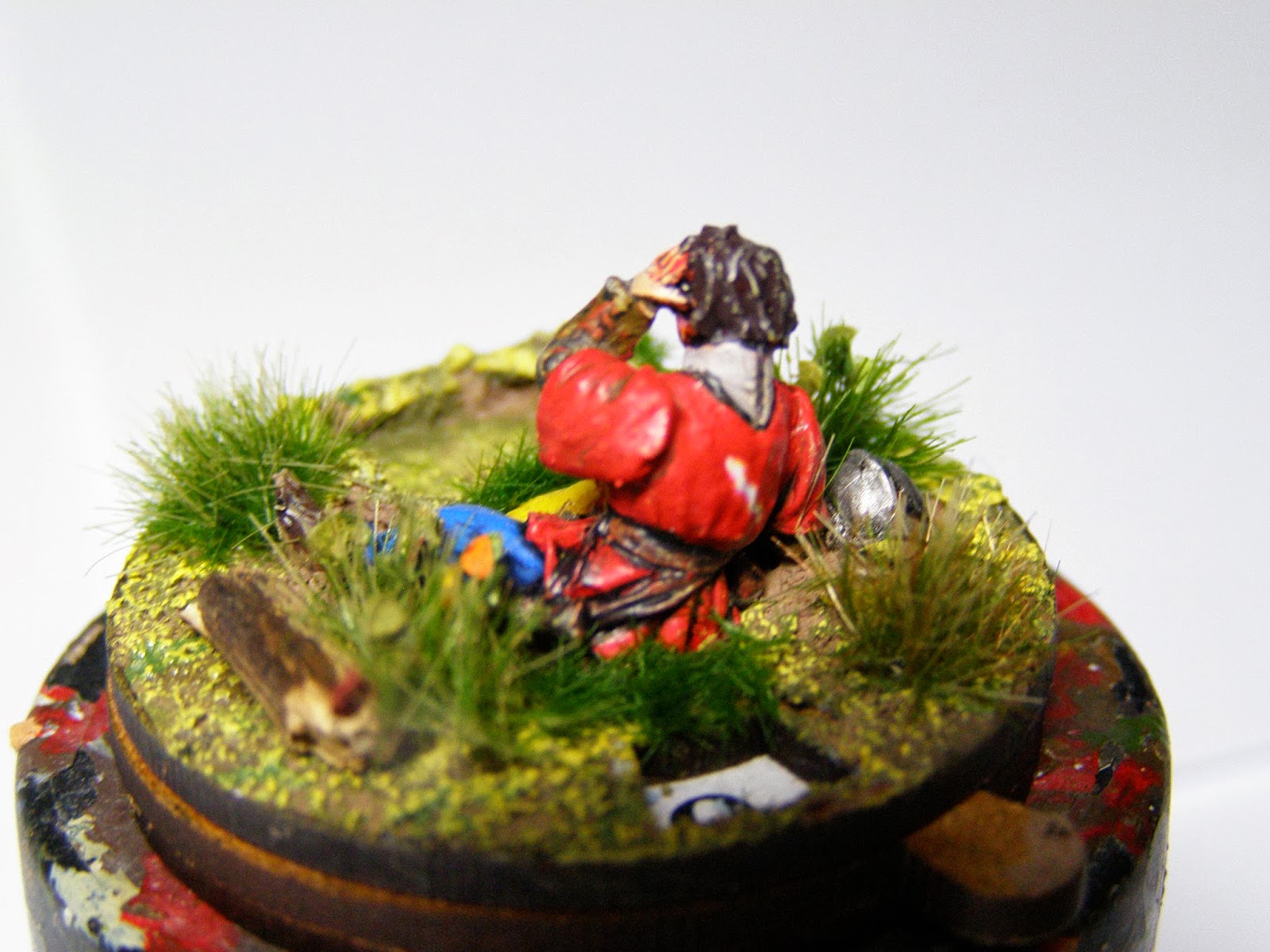 As these bases have one dial only I created a square in the base texture for which will sit a small six-sided dice.  This will keep track of the Excess casualties whilst the dial will track the stamina.  Not the ideal solution but it is at least workable. 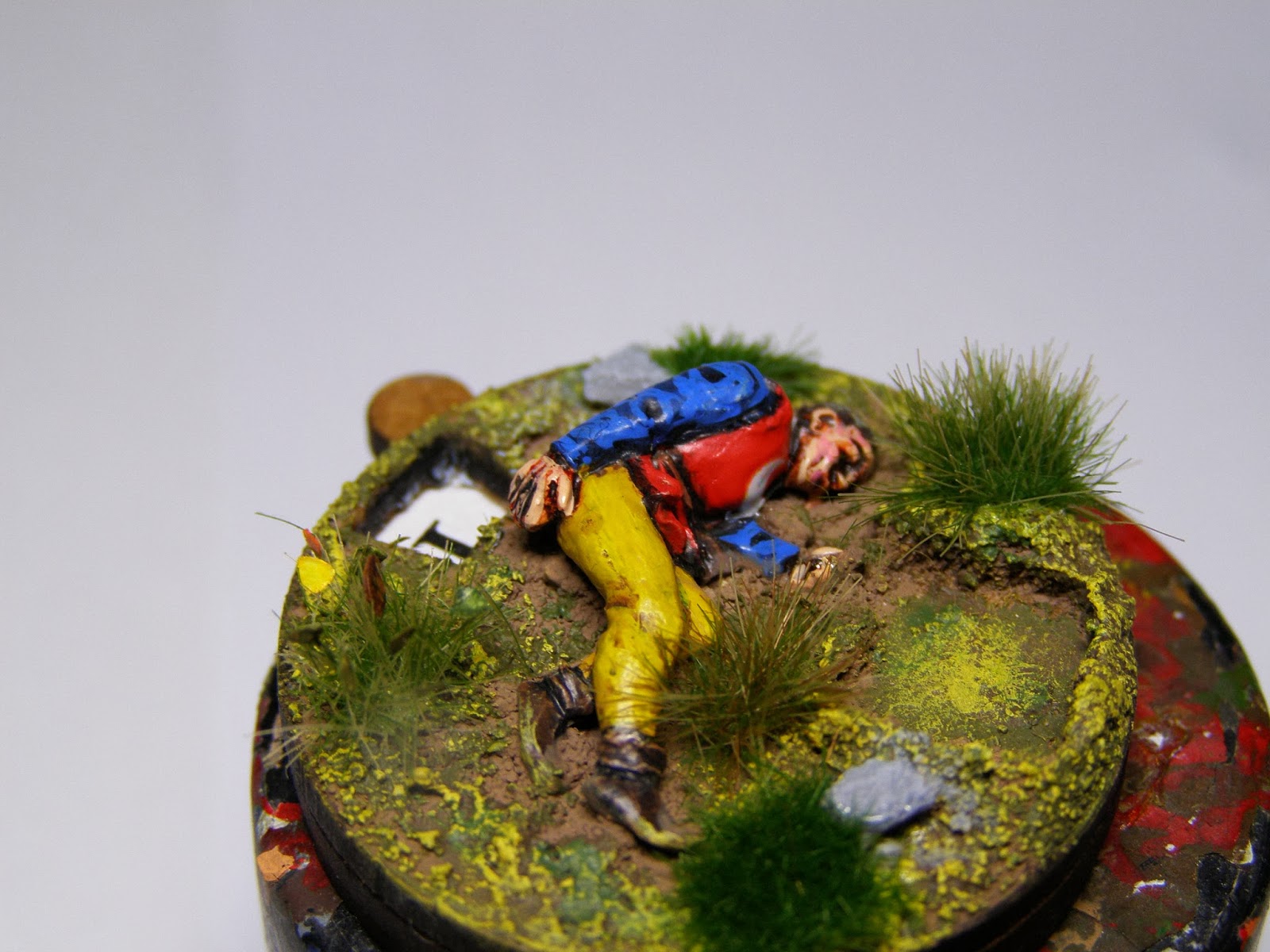 Ignore the strange blotchy colours around the base - I raised the base for the photo on an aerosol spray lid which I had once used as a painting pallette. 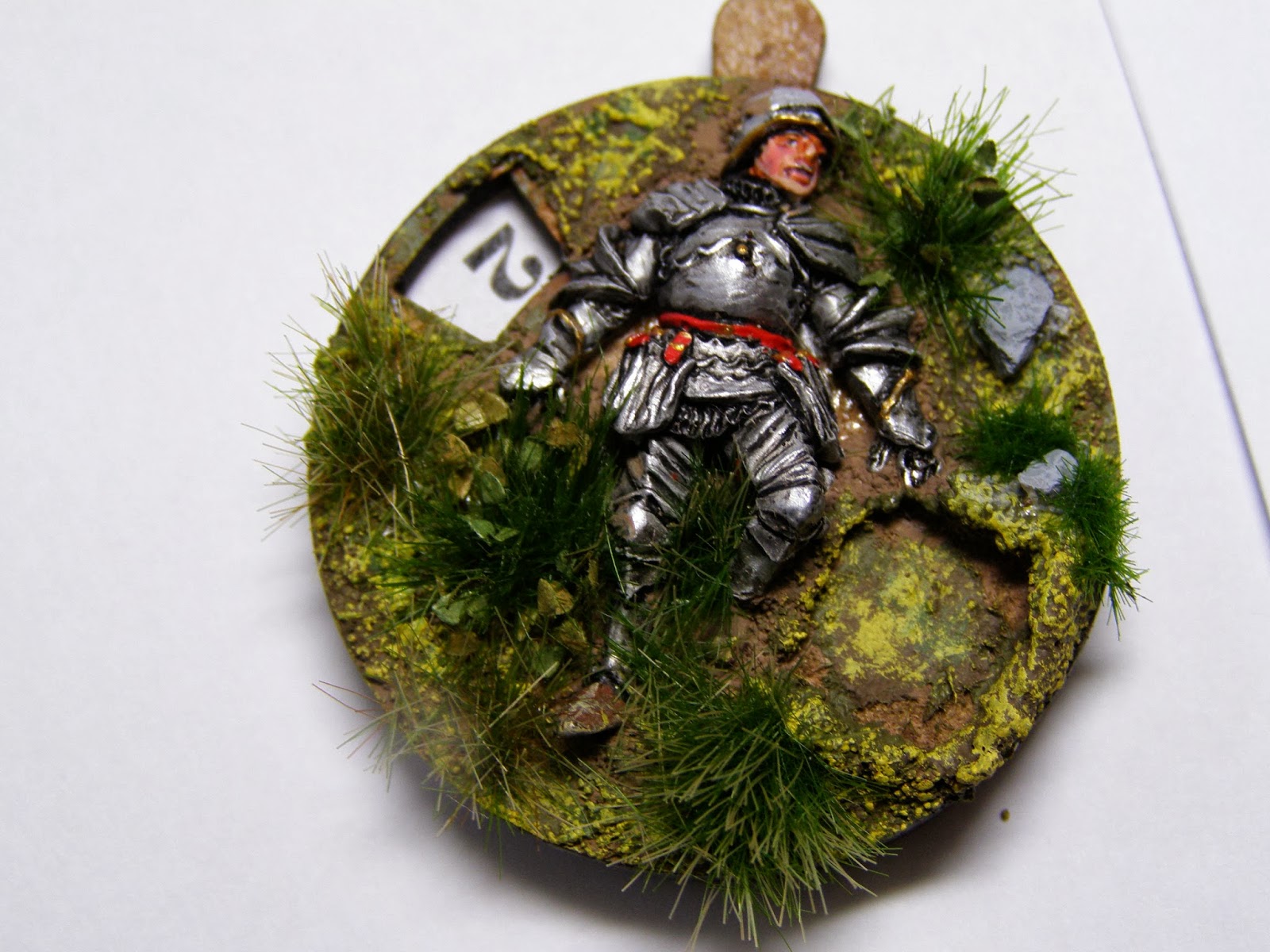 The Perry's provide a combination of men-at-arms as well as common foot soldiers in their casualty packs. 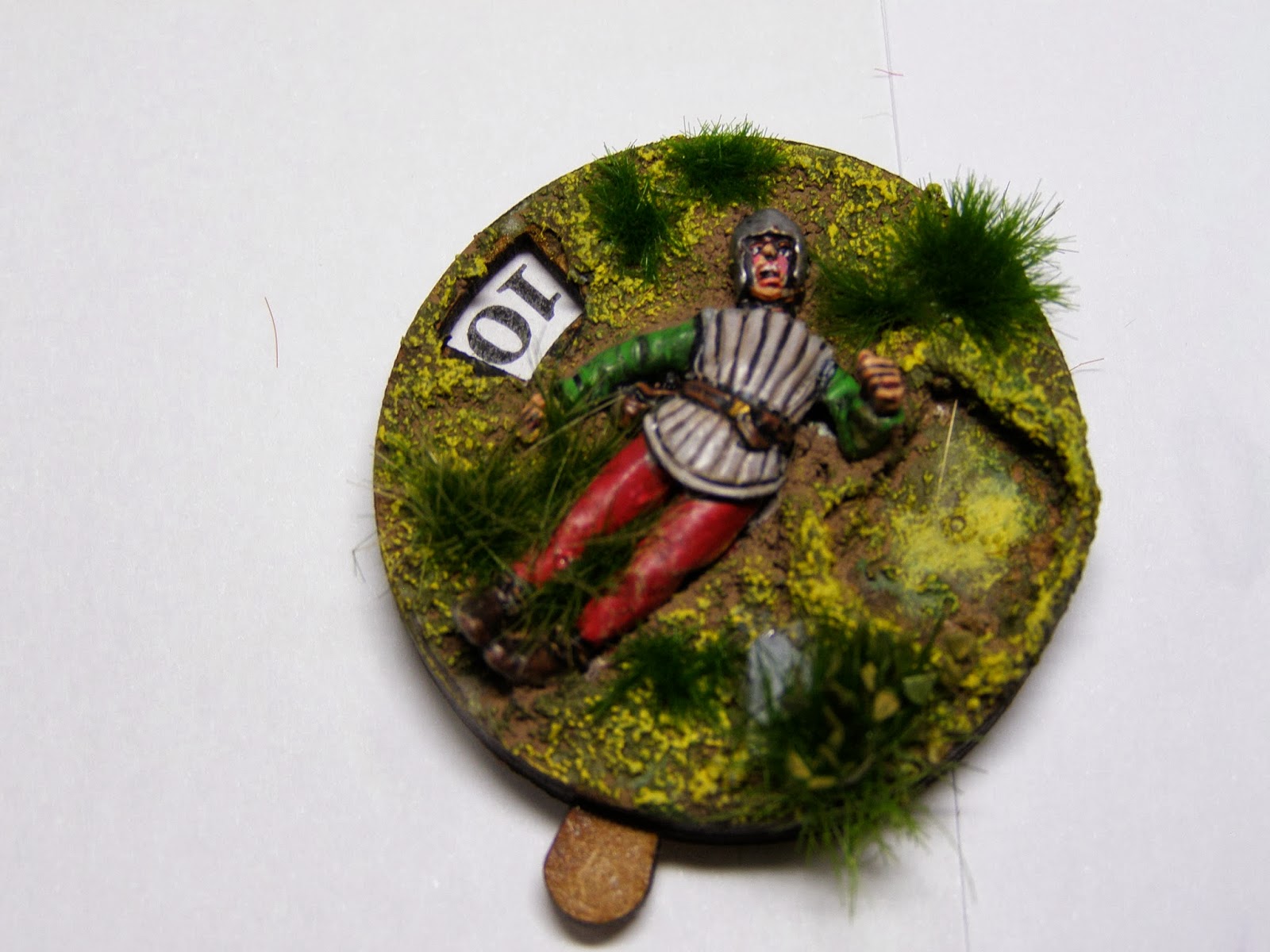 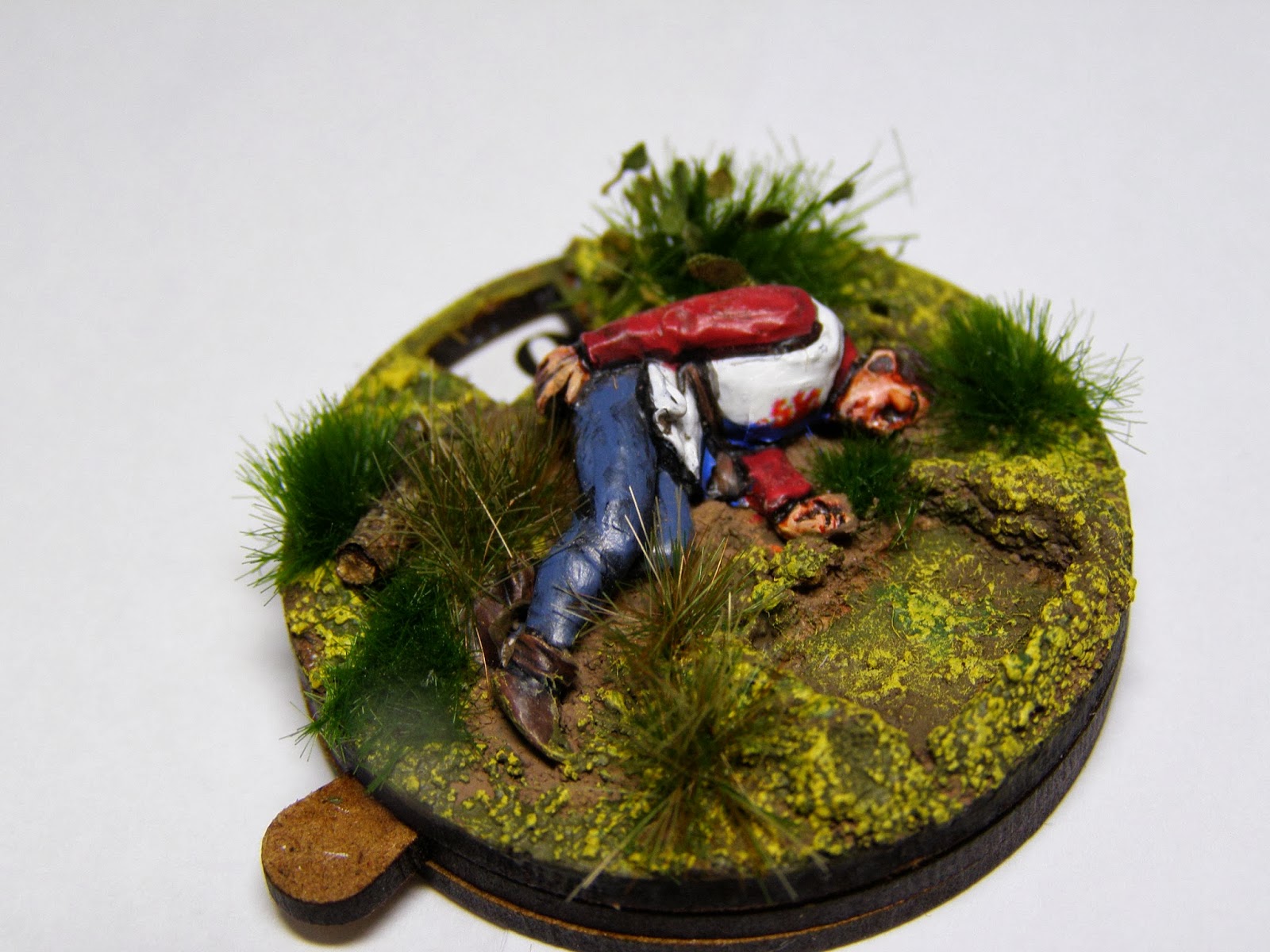 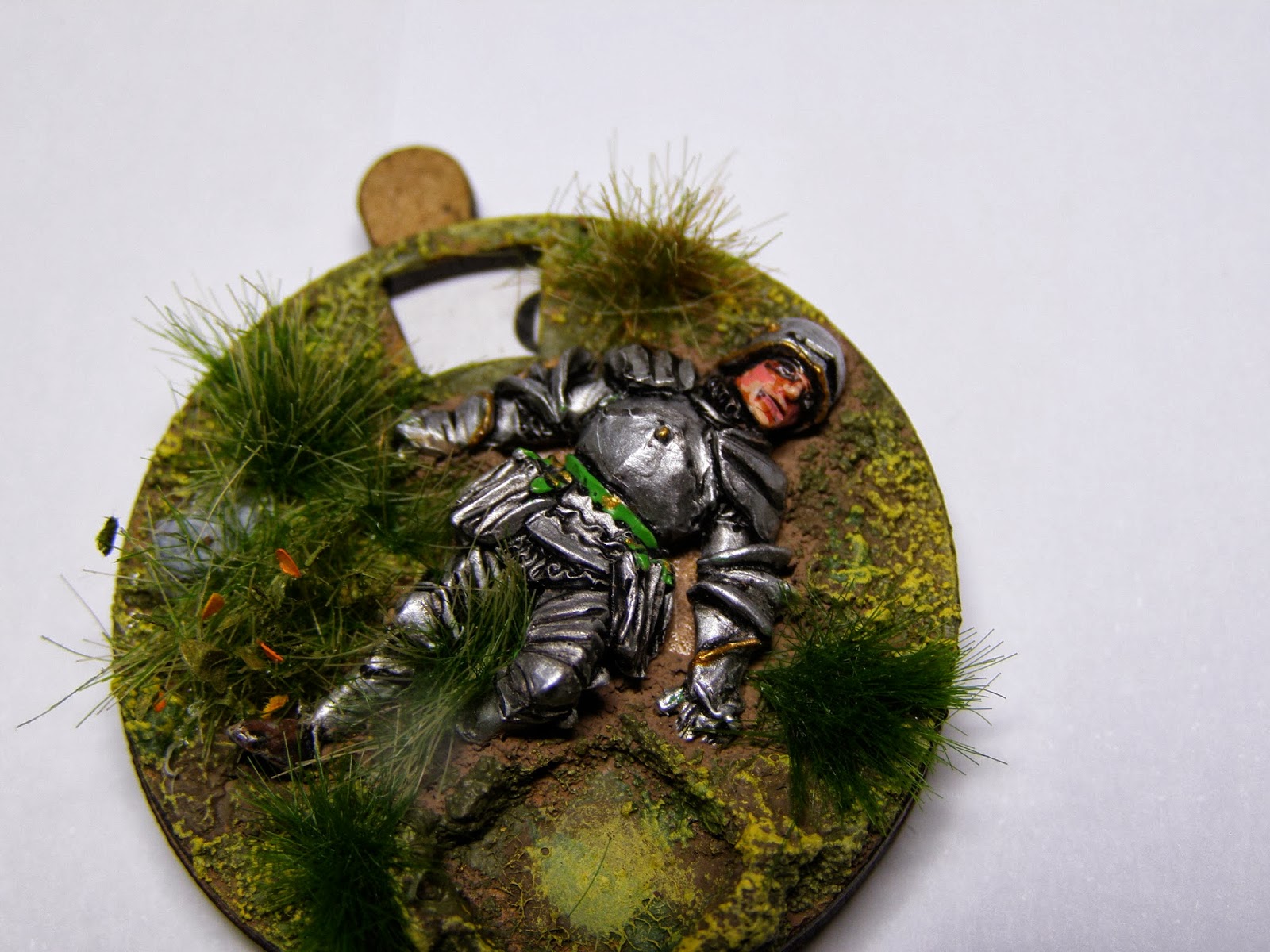 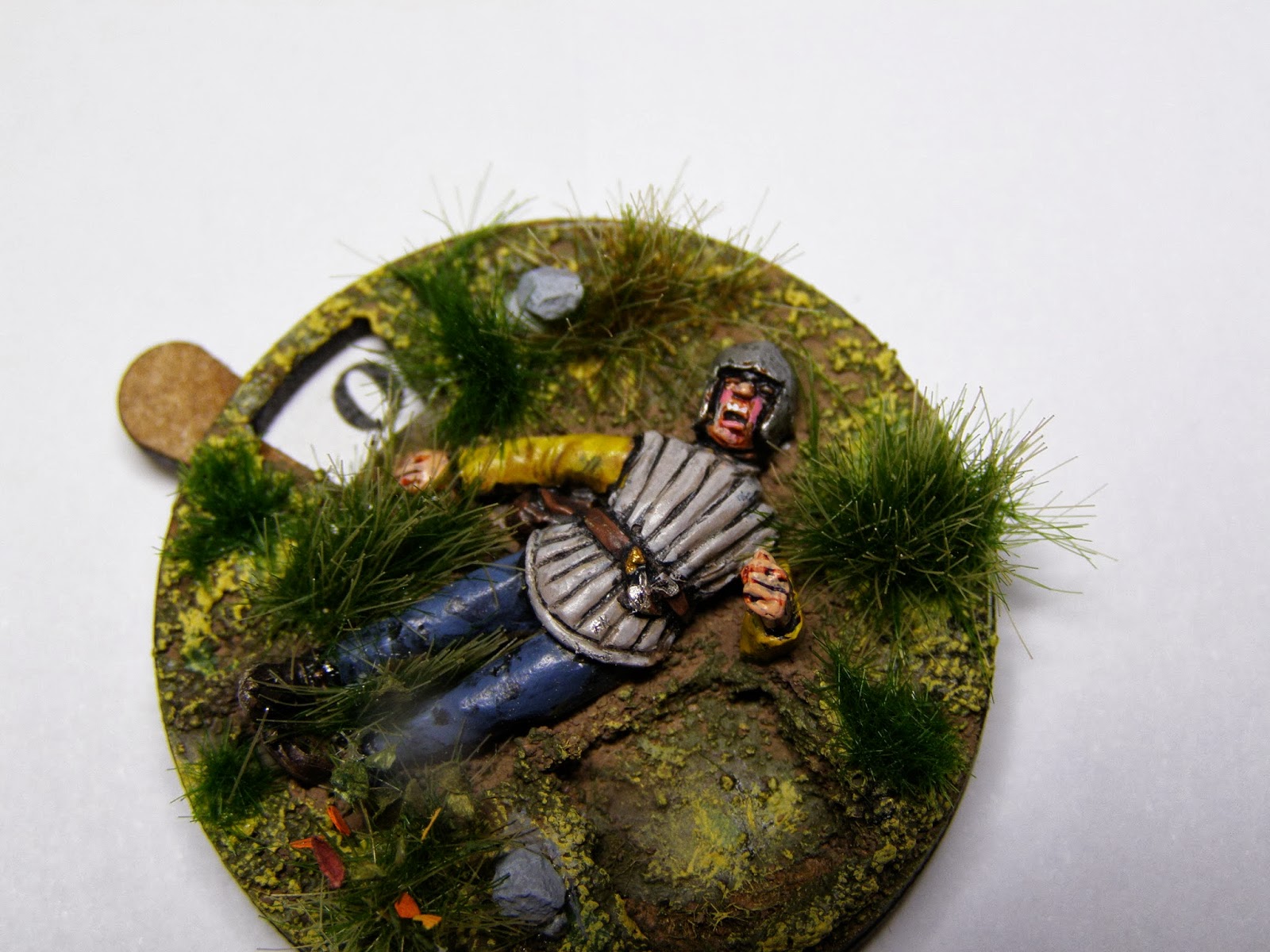 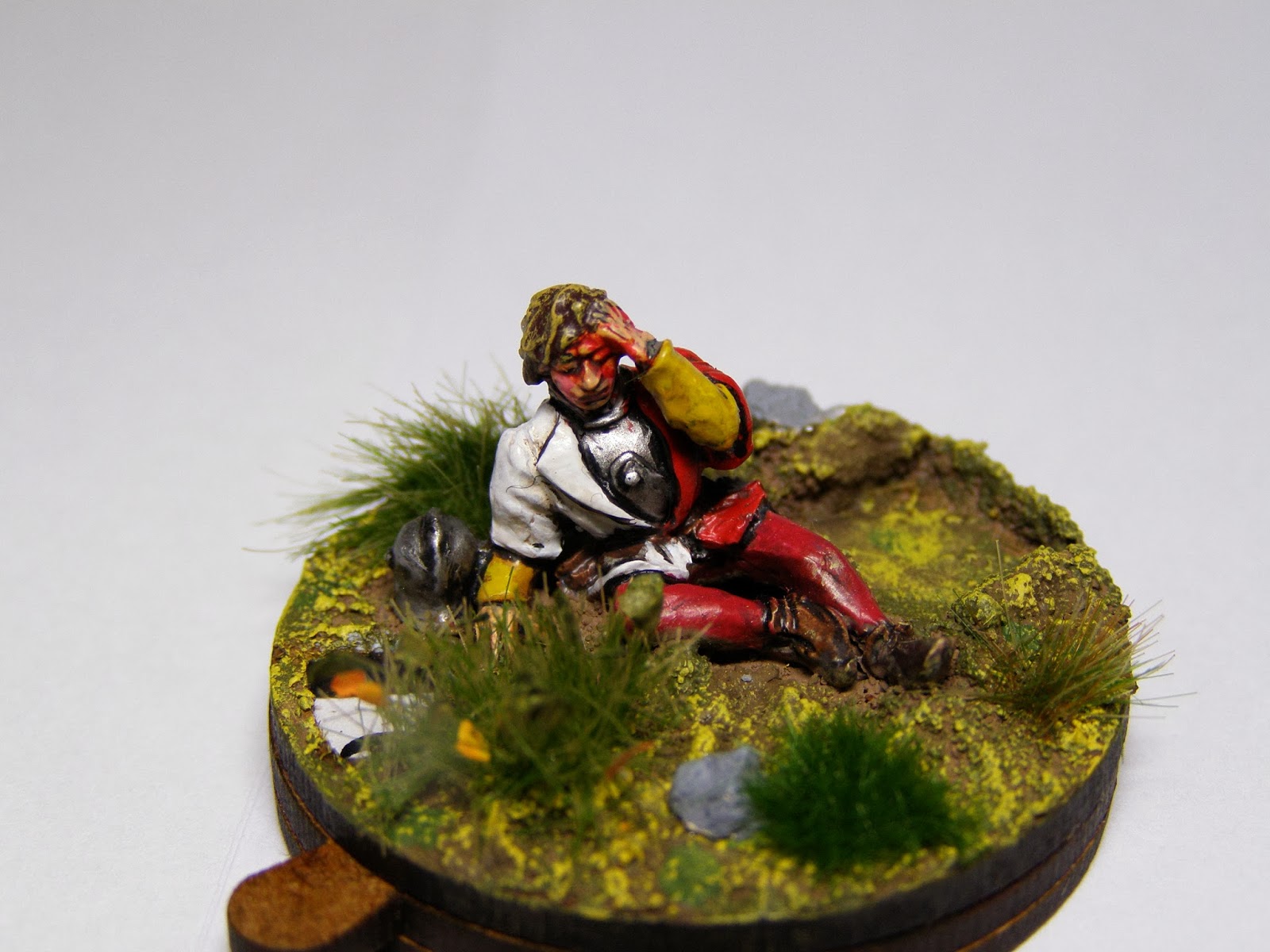 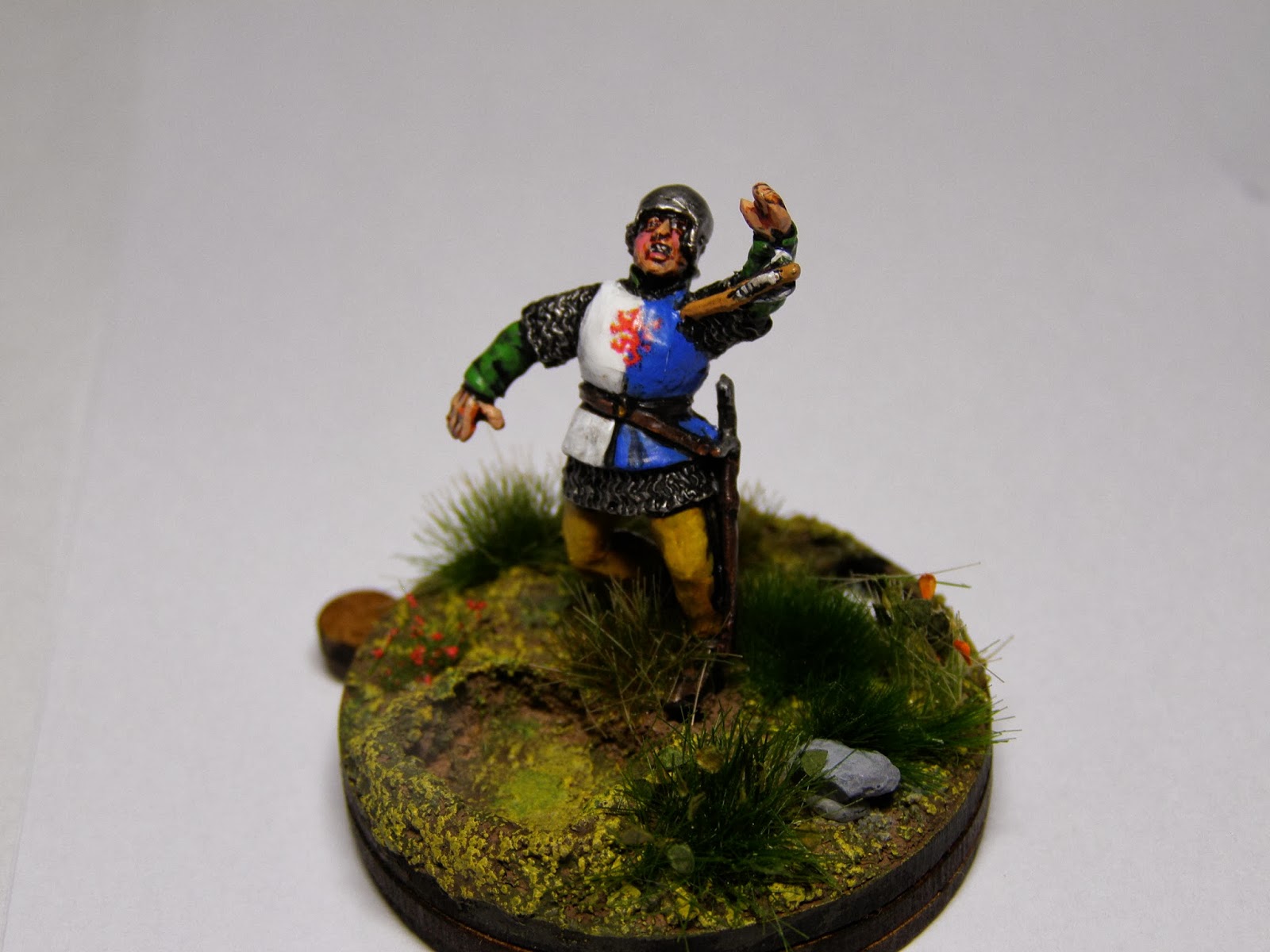 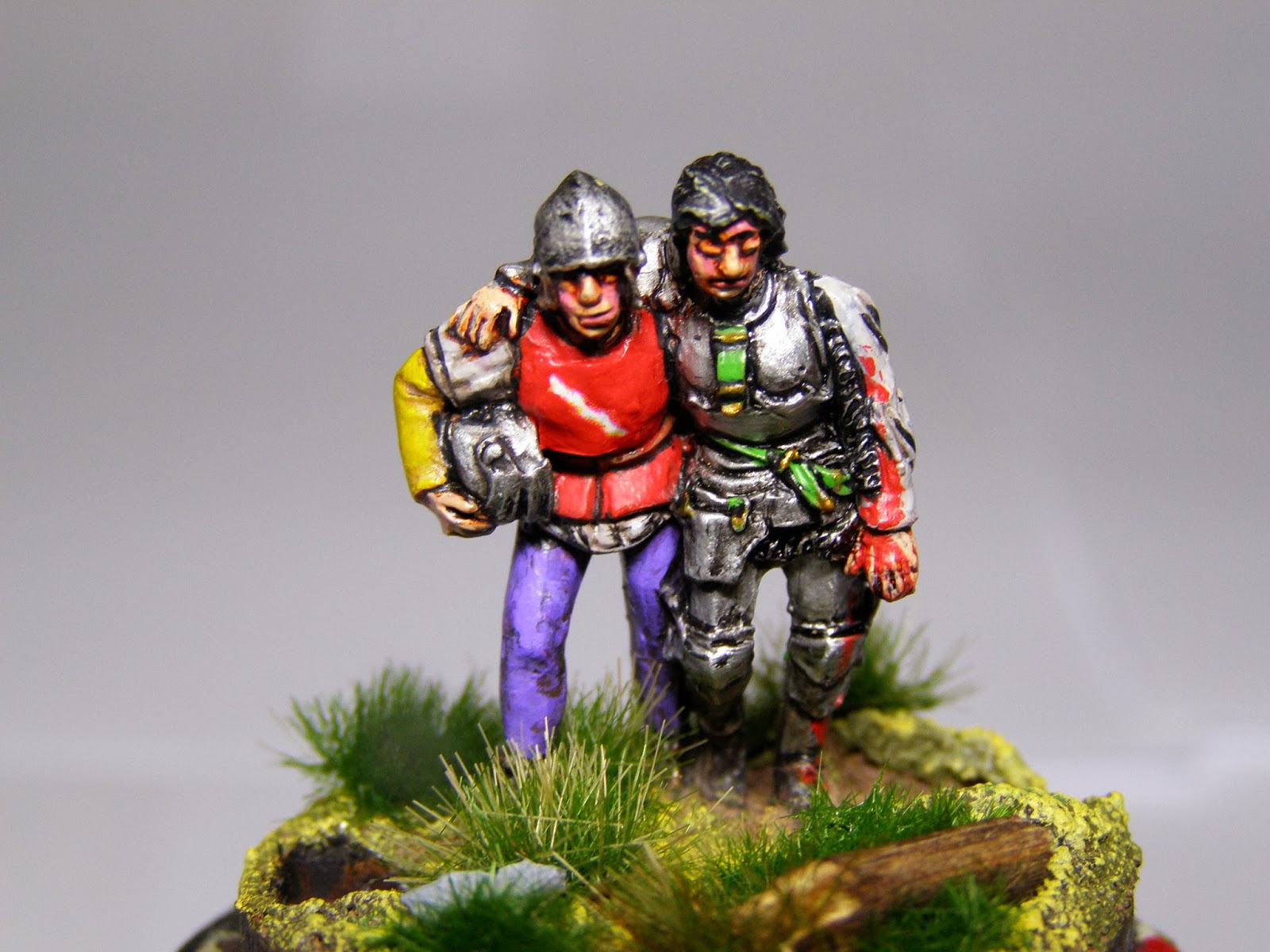 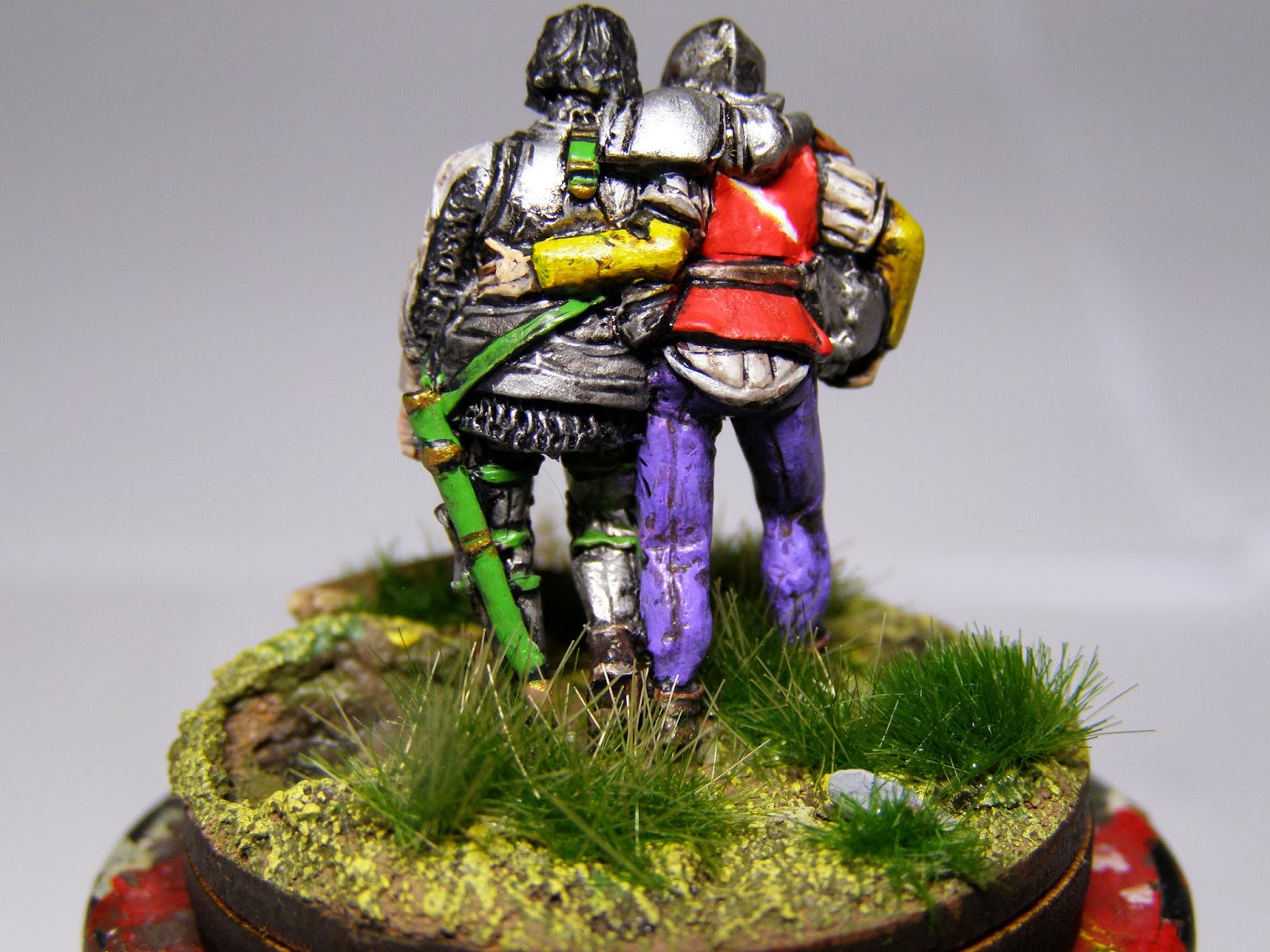 We have the vignette of Warwick's wounded to conclude with.  Livery design decals are by Citadel Six, the flora by Mini Natur, and the rocks by a company who made cat litter around 15 years ago (I still have some left but I'm going to have to buy some more!)

Hopefully I can now get back to finishing my previous project before I change historical periods. I've been solely painting War of the Roses for something like 6 months now and I feel a change coming on....