These are the photos of my current project. To completely re-vamp, re-organise and re-base my English Civil War collection.  I have been working on a few things at once (really shouldn't do but hey I am a wargamer!) but at the same time as doing the casualty figures I have also been working on these musketeers. 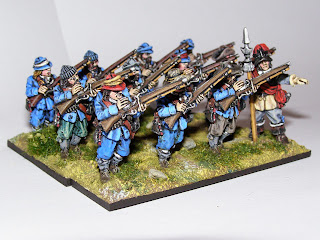 These are a musket 'wing' from Sir William Pennyman's Regiment of Foote.  The figures are from Bicorne Miniatures and I have to say I absolutely love the range and have done from the day I first saw them. 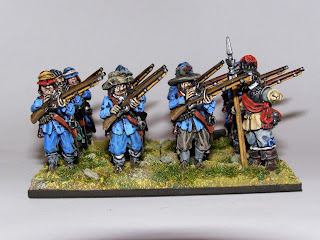 I love the detail; the holes in the uniforms, the patches, the individual characters. I like how the muskets have a solid look about them and with so much detail.  Some companies have figures with awful stubby little muskets...not these...these have heft and are a joy to paint. 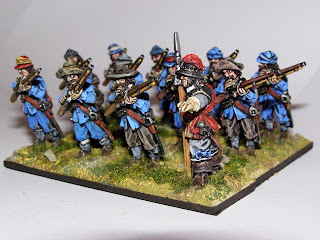 Traditionally I always seem to have used too dark a blue for my ECW figures.  They looked more like Frenchmen with broad brimmed hats.  I did my research with these and looked at the re-enactors from this regiment.  Their uniforms have a lovely 'washed out' look, just like I would imagine vegetable dyed clothing would look (actually I say that but what vegetable is blue?..I know nothing of dyes to be honest!).  Anyway I like the faded look. Campaigning in sun and rain must surely have faded the uniforms quickly. 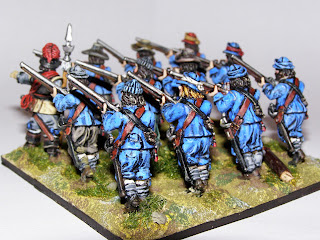 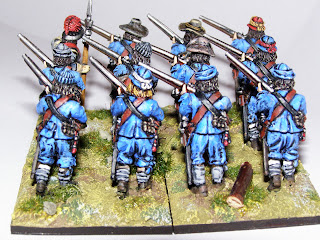 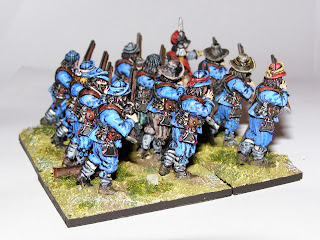 A few rear shots of this Royalist unit.  I really like the way that all of the equipment is visible and also a pleasure to paint and bring out.

You can have some fun with the details: 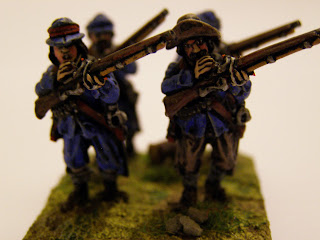 It took me hours to light all the match-cord! (only joking, but you can add little details like this with ease and it just adds something to the figures). 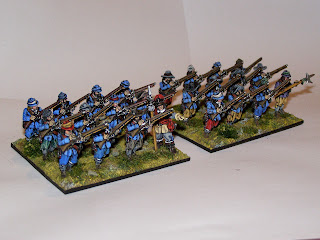 Here we have the new wing joined by the one I completed and re-based previously.  I just need to purchase a pack of pikemen and I can finish the pike block. I will have a whole regiment complete then.  I must be mad making 40 figure regiments, but it does look so good on the table!
Posted by Jason at 23:15 4 comments:

A gaming essential for me is casualty figures.  I always used to remove figures to show casualties.  But I always used to have a lot of single based figures to move around though...just in case I ever wanted to play skirmish games.  For this reason I kept many figures individually based. 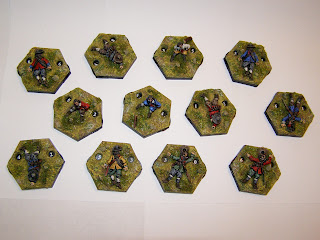 I have come to realise that skirmish games just are not my thing. I like to recreate battles, the larger the better!  It must be an age thing, but during my game turn moving single figures has become more and more irritating, especially those in pike blocks. Figures falling over, pikes coming adrift, armies taking forever to move etc. So I now like to base large. I like to base as many figures as I can on a base as long as it gives enough flexibility to recreate formations on the board without having to use a marker saying 'square' and such like. 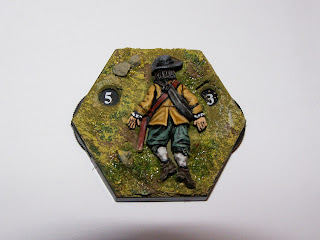 So with this in mind. I need to show casualties. I have found these bases superb. I use them for my ancients and now I'll be using them for English Civil War too. The figures are from Warlord Games, the bases are from Forgeworld.  With the dials I can keep track of casualties during the game and also those in the current turn. 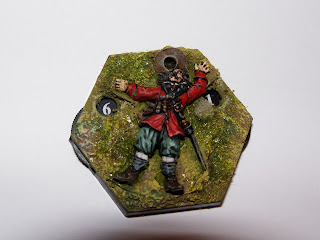 So I can retain the ubiquitous blobs of cotton wool for disorder or a multitude of other things, but casualties can now be shown like this. 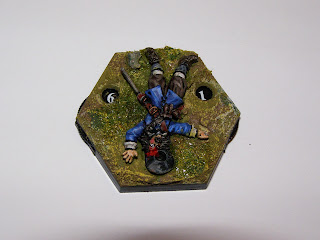 I tried not to go too overboard with blood and gore but this particular figure (above) needed something to indicate his spectacular unfortunate demise. 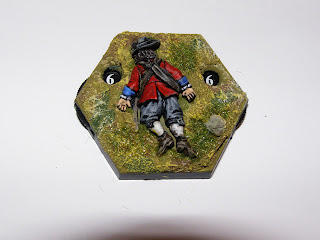 Some of these figures would make a great vignette to be shown with surgeons or body robbers and such like. 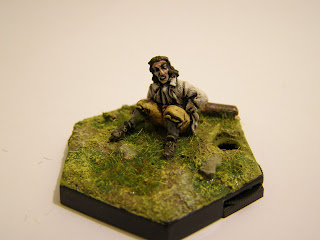 Not the happiest of fellows (Can also be used for constipation vignettes!) 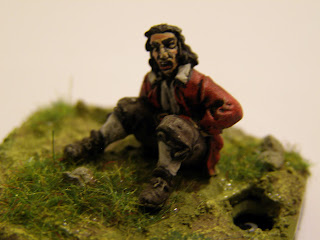 (For my own note - this closer pic and the following used the macro S1 setting but no flash - just ceiling light on). I really must go on a photography course or something! 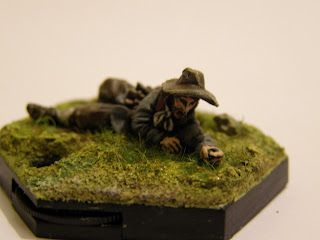 Anyway, these casualties should be enough to supplement my painted completed units to date. More battle units are needed...and hopefully in the next day or so another will be completed. Painting inspiration gained by a visit to Broughton Castle today should lend more speed to the brush...watch this blog! :-) 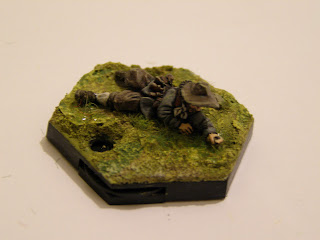 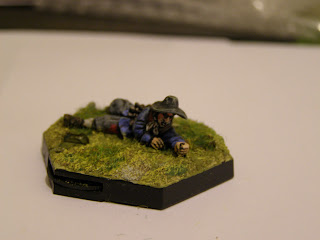 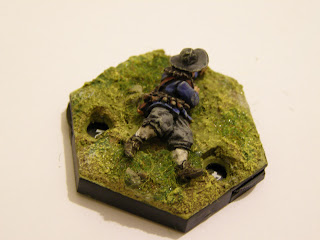 Going for it! ECW Infantry

Another post from me so soon? Well yes, this time with re-based English Civil War Infantry.  Again, I have gone for larger bases for what were figures based in 3's or as single figures.  Getting them out of the boxes now is a pleasure rather than something to dread.

First up are the Earl of Manchester's Regiment...or at least one of the musket block.  I am using 'Pike and Shotte' as my guide for my basing now...and I don't care what rules I might move to in the future...this is it... I will keep this base sizing!  Pike and Shotte actually go for a two deep musket block, but for me two deep is something I keep for Wellington's men or Seven Years War linear formations.  ECW musket blocks had depth, rarely less than 6 deep, often 8 deep at least at the start of the Civil War. So for me, 3 deep is the way it is going to be. 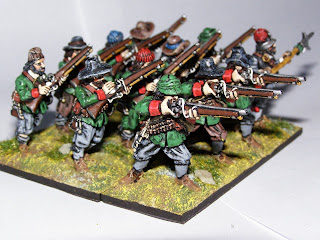 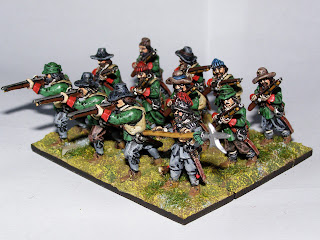 The figures are a mix of Bicorne and Renegade. Both had the same sculptor and both companies produce beautiful ECW figures.  I like the Bicorne ones in particular, they seem to have virtually no flash to trim too.
I was unsure whether to base them on one large base as per the pikemen, but if I wanted to represent hedgehogs then I needed to be able to separate the figures.  In the end I went for one row of 4 and two stands of 4 square. If i wanted to represent severely understrength units I could always have the option of removing the row of 4...or add them to another unit to go 4 deep! 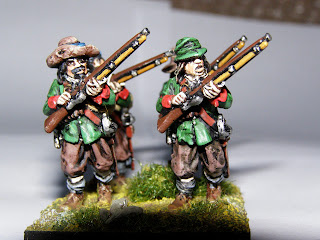 A close up of some of the detail.  I do love these figures. On many figures there are rips and tears in the clothing, patches too...plenty of detail to please the painter.

Now the next batch of figures were actually painted by my fellow gamer, Ian.  I purchased these from him as I couldn't bear to see them go to the Bring and Buy at a show.  These are painted as the Red Regiment of the London Trained Bands. It's very rare that I buy second hand figures without re-painting them.  I decided these were good enough for me without getting the brushes out.  I have re-based them though as I did for the Earl of Manchester's. 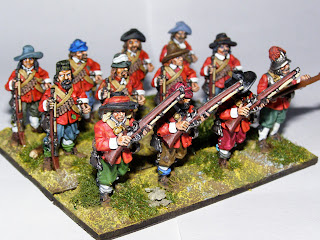 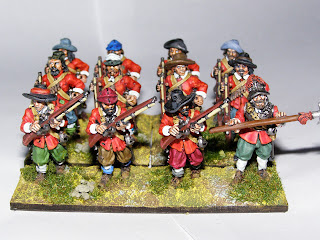 The pike block are all on one base.  This is going to make moving them during a game an absolute pleasure and should be trouble free, nothing worse than a single pikeman falling over as you try to move them and then of course you get stabbed to bits trying to retrieve the fallen fellow!  Putting the basing material and painting over it was a bit tricky but not impossible. I really needed the figures in place so I could go between feet etc. 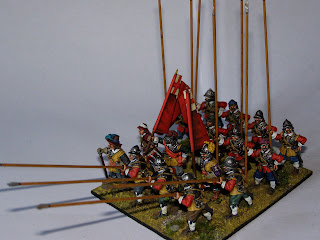 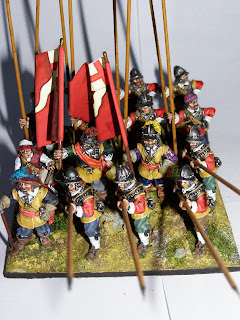 Finally a view of my standard unit sizes.  One musket block of Manchester's is standing in for an incomplete Red Regiment musket block wing.  It seems 40 figs is going to be my standard unit....well it seems to have a good solid feel about it...though it's going to take me a little while before I have enough troops to get to play Marston Moor! 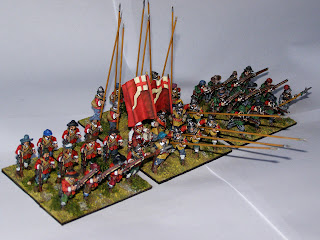