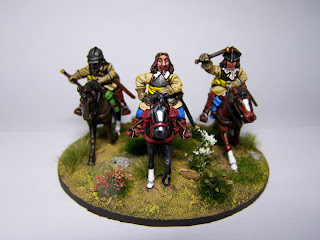 Sir William Waller, the famous 'Night Owl' and his staff officers are now ready to command their troops on the field of battle.  For some reason I seem to neglect painting command stands in favour of combat troops.  I think it must be the feeling of responsibility for the representation being made of such important figures.  These are after all the models which receive the most scrutiny! 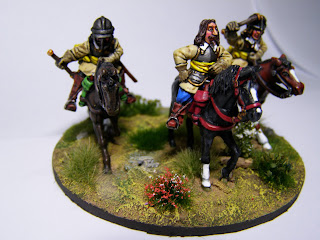 Certainly I did try to go the extra mile with this stand and I hope it shows.  I examined some of William Dobsons contemporary civil war portraits, to get an idea of how senior officers armour should be painted.  I avoided too much gold braid, and went for more of an 'in the field' look, though bearing in mind that these were men of quality who would want their men to know it! So it was a case of balancing the look of authority with the look of veteran campaigners.  You will have noticed that Sir William and his staff are wearing yellow sashes instead of the traditional orange.  Orange was the colour of the Earl of Essex and as Waller and Essex appeared to absolutely hate each other (exacerbated by the need to compete for resources from Parliament's committee), I just cannot see Waller wearing Essex's colours.  There is a view that each regional commander had his own sash colour in the Army of Parliament.  Waller it is now thought, wore yellow and Sir Thomas Fairfax wore blue.  It would be great to see some contemporary evidence for this, but it is more likely than orange being worn universally. 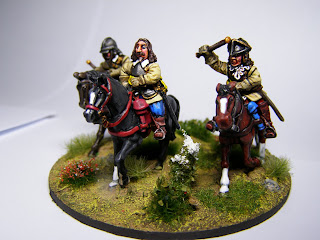 Waller, of course, was the great rival and friend of the Royalist Sir Ralph Hopton, and he gave us the immortal phrase used frequently to describe the civil war as 'this war without an enemy.'  Waller was famous for his night marches and his eye for choosing good topography and making the best use of it.  He was undoubtedly a very good commander.  Wikipedia and the internet will give far more information should this whet your appetite. 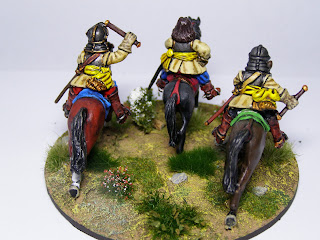 The interesting part for the Pike and Shotte rules is what command rating to give him.  Most good commanders get a rating of 8.  Pike and Shotte give Hopton a rating of 9.  This makes it easier for Hopton to command his troops.  History does seem to justify this as the Cornish troops did appear to hold Hopton in very high esteem (and they were loathe to follow just anyone who was appointed to lead them).  Waller on the other hand seemed to be cursed with mutinous troops during several of his campaigns, but didn't seem to be able to hold the same magnetism over them to make them do his bidding.  As a result I think Pike and Shotte probably have this correct.

As I seem to throw myself into any project I do in a completely overboard way, I also purchased the book on Sir William Waller by Professor John Adair.  I used the portrait on the front cover as a guide to getting some detail features correct.  Firstly the book: 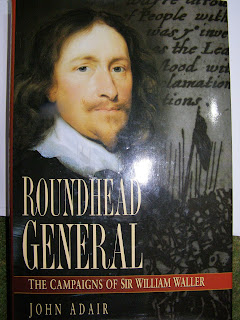 And now my figure: 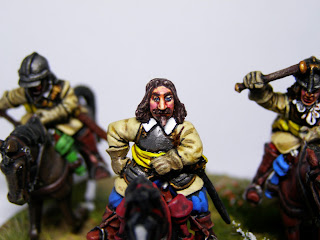 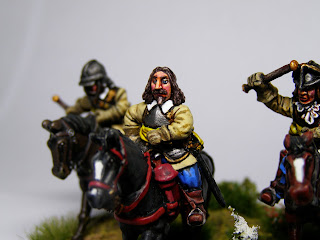 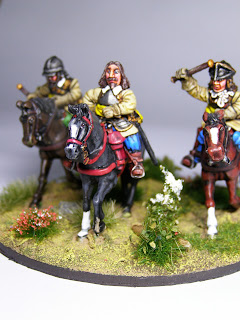 This was the first real use of my daylight lamp for a figure from beginning to end, and my goodness, I spent some hours under it's light painting these!  Sir William Waller is one of the superb Bicorne Miniatures characters.  The staff officers are by Renegade. 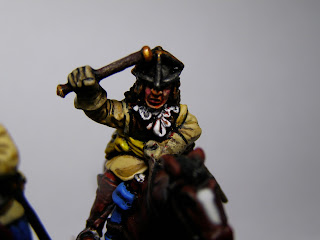 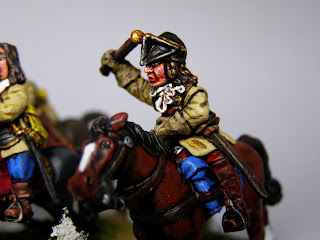 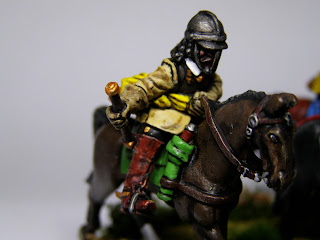 The staff officer figures would make excellent Generals in their own right and so the additional ones I bought from Renegade will fill in the gaps of commanders that no one yet produces.  Sir William's old chum Sir Ralph will probably feature in my next blog....though the purchase last week of a Chassepot Rifle from the British Shooting Show is inspiring my historical leanings back again towards the Franco-Prussian war...ah the perils of being a wargamer! :-)
Posted by Jason at 00:05 10 comments: