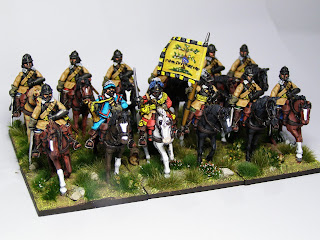 Well now, having my car break down on the way to a weekend of working has left me with two days of unexpected free-time for blog-posting and painting.

Here we have Sir William Waller's Regiment of Horse.  This regiment saw extensive action during the English Civil War in Waller's western campaigns against the Royalists. 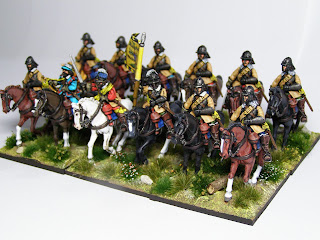 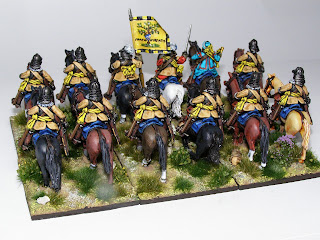 The figures are from the 28mm Bicorne Miniatures range which I think are a magnificent range of figures for this period of history.  The riders are more sedate looking than the others in my collection and are from the more recently produced figures in their range.  I think they have used two sculptors to create their figures
. 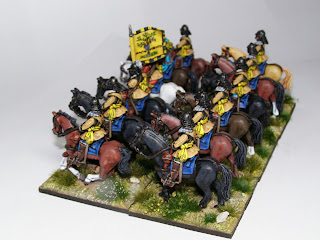 I opted for these figures because they have the coloured identification scarves whereas others in the range don't have them.  With cavalry uniforms on both sides being almost identical, the use of identification colours must have been widespread.  These troopers are also carrying carbines, which I'm guessing would have been more than likely with a wealthy officer like Waller having raised them. The carbines would also have been extremely useful in the hedge-fighting and ambushes which occurred in the western campaign . 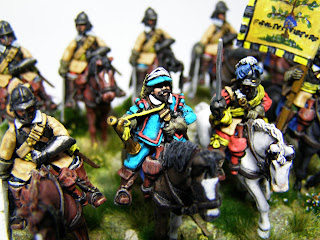 I have painted these mostly with the Foundry triad range of paints, though Vallejo and some Citadel paints have been used too. 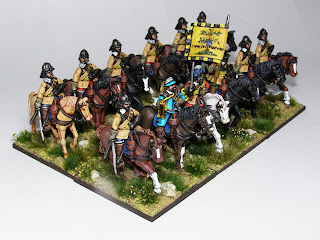 I couldn't find a commercially available Guidon for Waller's cavalry so I created and painted this up on paper using a photograph of Waller's re-enactment cavalry from Facebook as a guide.

There are some rather nice photos of the re-enactment unit at this link here: 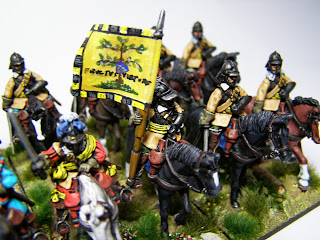 I try to avoid making my own flags whenever possible though this one was quite fun to do.

So what next...well at this time of year I am always drawn into three periods of history:

Having said all that, like some wargaming magpie, something else new and shiny might get my interest!