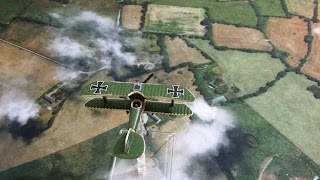 Well, that was a longer break from blogging than expected!  Lots going on.  Hobby wise the painting has continued with several projects starting but less being completed than I would like.  The games have been good and I have played one game per month on average, mostly of old favourite rule sets, such as 'To the Strongest'.

However, this weekend a new game was tried. At long last 'Wings of Glory' was played! For many years I have considered it and watched games being played at wargaming shows and everyone always seemed to be having a great time.

At Colours 2019 at Newbury I made the jump and bought the boxed set and a couple of planes (which quickly became four planes!). 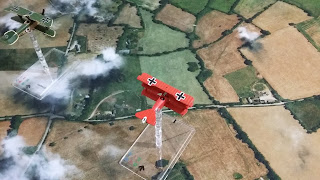 ...and I have to say how delighted I am with it.  What a superb game!  It's greatest attribute is probably in really getting a key part of aerial warfare to be it's key focus... Manoeuvering!  Getting into that position to take the shot...and having to try to predict what your opponent is trying to do. 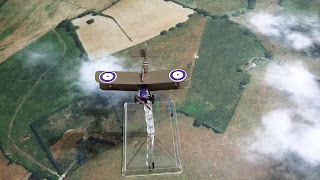 It does this wonderfully.  Another thing I really like how the manoeuver card deck is specific for each type of plane.  So your rotary engined Sopwith Camel is really going to turn well to the right but less so to the left.  Every plane has it's own set of unique cards. 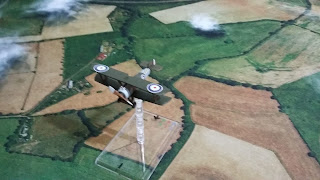 The damage cards are really good.  It is really good that many cases of damage are not going to be known immediately to your opponent until it becomes obvious that you can't turn to the left etc due to rudder damage. What a great touch! 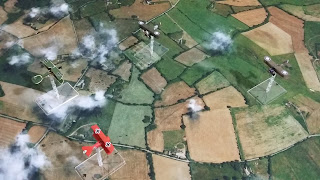 Trying to think three moves ahead is brilliant. It is hard initially but after a couple of games I could start putting some worthwhile tactics together. 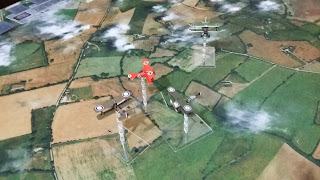 The control console with cards kept in logical order and a nice simple layout for each plane made running the game so easy.  This really was just how an aerial warfare game ought to be. 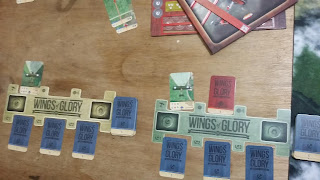 Oh and then there's the planes. Quite lovely!  Yes they could be improved a little bit more if I really wanted to spend brush time with them, but I'm not really inclined to.  They certainly look good enough to play with and looked great on the Deep Cut Studios mat.

The models are far better than those bendy winged things that another company made for their own aerial warfare game (mentioned a previous post). 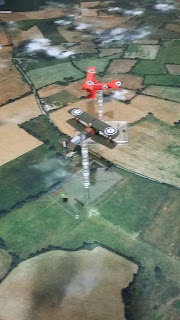 The games I had with Ian on Saturday evening were just brilliant.  It was highly entertaining and everything you want in a game.  Time just flew past. It was the first time either of us had played so we started off with the Basic rules first and then moved onto Standard rules for the very next game.  Next time will be Advanced where altitude comes into play.  I am already really looking forward to this and have been online looking at 2-seater fighter bombers and recce planes to create more scenarios with. 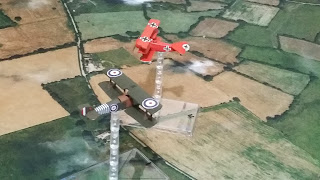 If you have never played these rules before then I can highly recommend them.  I am probably one of the few wargamers never to have tried them before, however, as they are popular on the show circuits.  The rules have clearly been intensely play-tested prior to being released, just as they should be.

So the big question remains...what planes to buy next?!