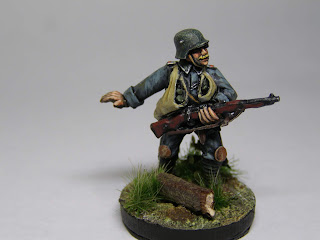 This time we have figures for the other side painted up!  These are late war German Infantry from the Great War Miniatures Range. 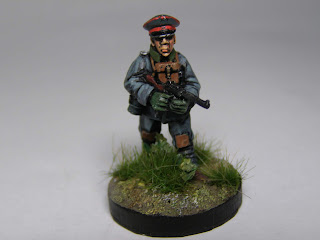 I'm aware that the grassy bases are a shift away from the typical WW1 figure with their muddy bases like melted chocolate, however I am really aiming to represent figures from when the battles of movement commenced, from Kaiserschlacht to Amiens 1918.  There is enough mud not to hopefully not detract too much should they find themselves in muddy craters of no-man's land! 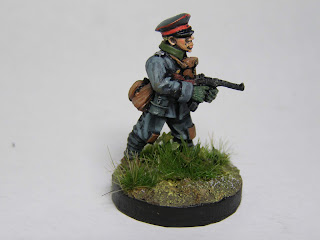 I have to say that I really enjoyed painting these figures. It was the first time I have ever painted WW1 Germans in 28mm or indeed any scale (other than a rather brave attempt at converting a 1/32nd scale figure when I was about 12 !...including tissue paper and PVA glue puttees!  - actually it was not as bad an effort as one might imagine!).  However I won't include images of that figure. These are all Great War Miniatures 28mm. 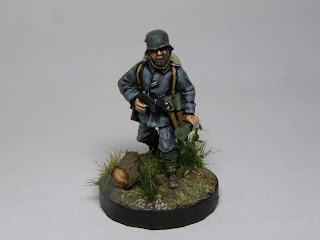 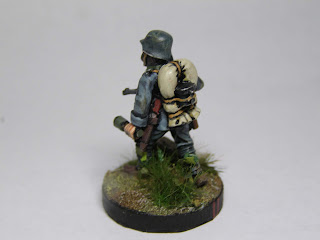 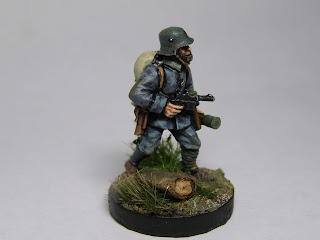 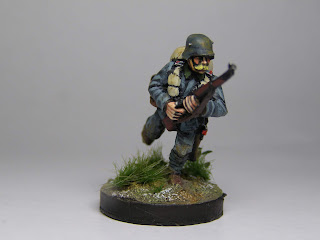 These have taken me a few weeks and the reason for this has mainly been the need to research all of the colours for almost every item. I have taken so many screenshots of re-enactors and online prints and read as much technical data as I could find. 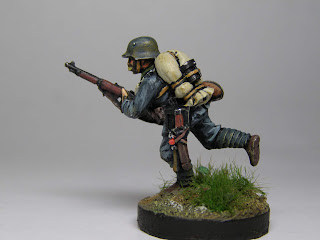 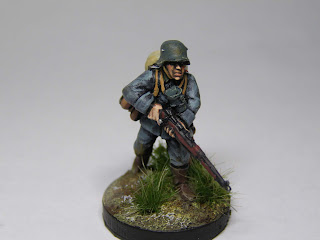 I was always struck by the slightly different shade of the late war tunic with the 1910 Waffenfrock of the early war period. Having compared and read as much as I could it seems that the earlier tunic was slightly more green than the greyer shade of the later war 'Bluse'.  It also seems that shades varied a lot, and like most things, with the amount of sunlight on item at the time of the photo. 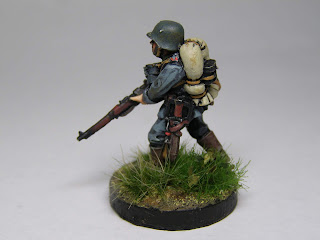 Shading took a lot of experimentation and I changed my mind several times during the process. There were again about 35 stages to painting the figures which I have logged to ease the workload next time.  I'm always happy to share paint colours used if anyone is interested. 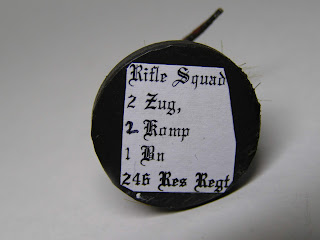 A sign of the obsessive wargamer!  Yes my labels changed from my usual chosen clear fonts to Gothic Script (actually and rather ironically Olde English Script,but it was close enough!).  The unit chosen is one that would have faced the British Division I have painted on the Allies side, at the Amiens campaign of 1918. 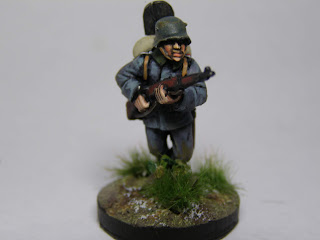 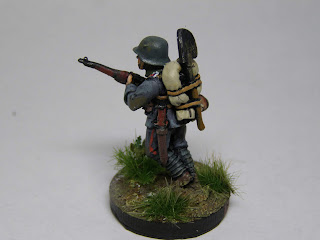 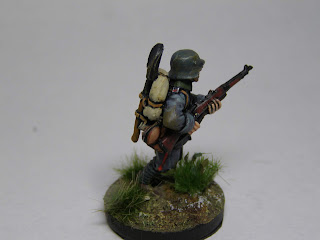 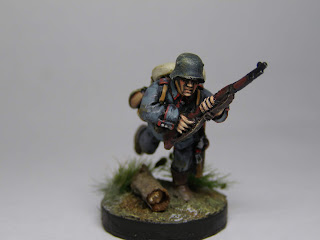 I couldn't resist giving some slightly outdated tunics and trousers to a couple of the troops. Stores, as so often, will issue out what they have, especially if there are shortages. 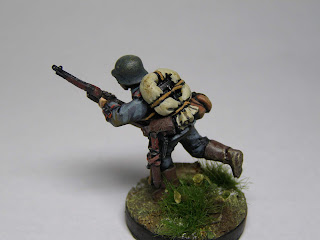 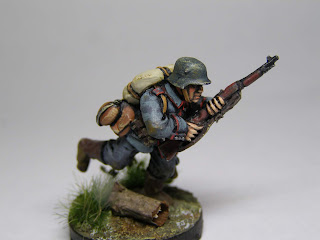 The red-trim of the earlier uniform jacket was really quite interesting to paint. I will have to do more like that. 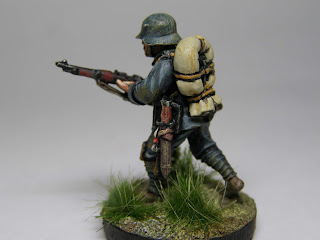 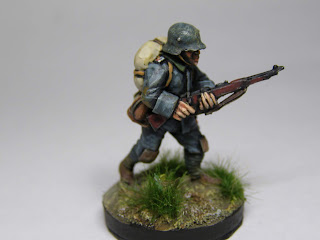 I have tried to make them as accurate as I could, even down to the correct company colours on the Troddeln bayonet tassels.  No doubt something isn't quite right somewhere but I was pleased with the way these turned out. 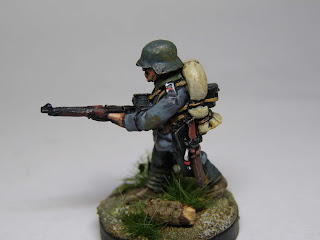 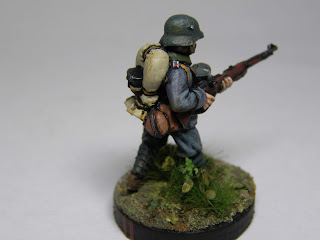 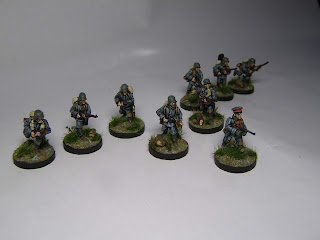 I'm off to see the movie '1917' later so hopefully the inspiration will make me continue with the project.  I really do want to get on and do some early tanks!
Posted by Jason at 01:22 8 comments: 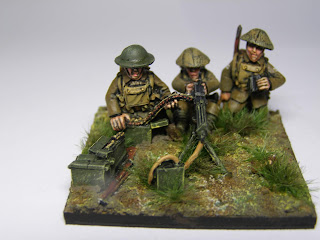 Here we have a Vickers Machine Gun team by Great War Miniatures. It is another lovely model which was great fun to paint. 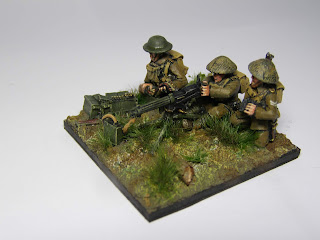 There was a little more flash than I would have liked, though it was almost a deformed mould effect rather than simple flash-marks.  A bit of cutting, drilling and scraping...and of course painting....and it all came right. 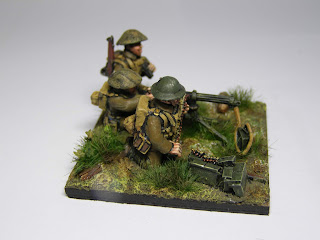 The gun team is painted to represent a team from the Machine Gun Corps attached to 5 Royal Berks of 36 Brigade, 12th Division.  The MGC were popularly known as the 'Suicide Club'.  Often in positions exposed to enemy fire their rate of losses was very high. 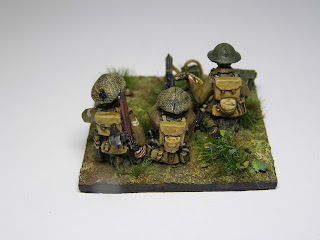 Having had a Great Grandfather serve as a Machine Gunner (and be wounded twice) with the MGC during the Great War,  I did what I could to make an accurately painted representation of a gun and crew. 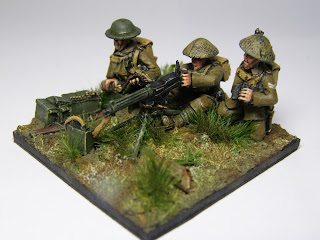