I came to the conclusion recently that I have nowhere near enough commanders to get the most of out my games.  My preferred rule systems are Black Powder, Hail Caesar and Pike & Shotte and these feature a lot of command input.  Quite rightly, to my mind.  Rules without a heavy onus on command and control is anathema to me these days. 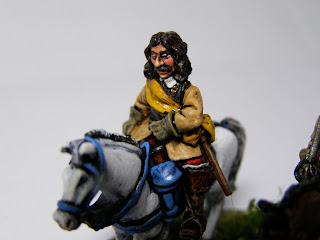 
So having too few commanders to get the game moving along is a problem.  I have had quite a few games now where the 'friction element' of the commander not getting a throw below his leadership value has kept the entire brigade stationary for too many turns. Despite the Brigade Commander located nearby and clearly shouting at his troops until he is blue in the face, they just won't move.  Is this realistic? Well it depends on the situation and the faith of the troops in their commander.  Being unpaid and close to mutiny may not help! 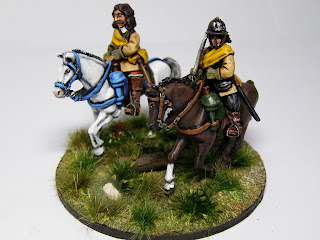 So with this new impetus to improve my games I have begun the quest to add more commanders to my many armies.  This of course bring it's own painting challenges as one realises that the commander is the figure that everyone expects to be painted to a higher standard than other troops, and of course, you wish to do justice to that historical character. 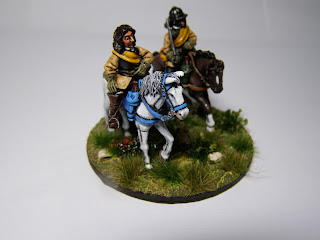 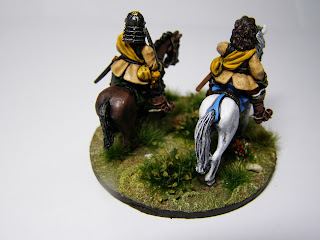 The figure above is Sir Philip Stapleton from the excellent Bicorne Miniatures range.  He is based with (if I recall correctly), one of the Life Guard figures who make excellent senior officers in their own right.

My main interest in the English Civil War battles are the campaigns in the West, so out of desperation for more command figures I was going to make Sir Philip into a generic commander of Waller's and probably sporting a yellow sash.  However, I do have a fascination with the First Battle of Newbury where Sir Philip was a key commander, so I wanted to be able to use him for that battle representing himself too, should I ever paint about 20 cavalry regiments a side (!).  At Newbury he served under the Earl of Essex so orange sashes it would be.  This caused me a dilemma until I saw the portrait of Nathanial Fiennes, whose sash colour is somewhere between orange and yellow...the perfect solution! Now I can field Sir Philip in either theatre. 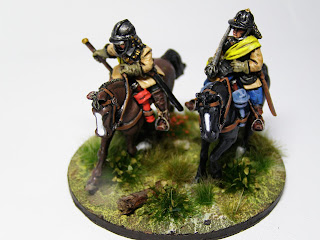 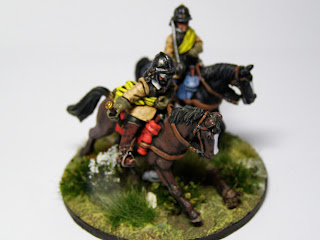 The senior commander with baton is from the Renegade range and fulfils the role of a generic commander very nicely. Again I have used a Bicorne Life Guard as a senior officer. 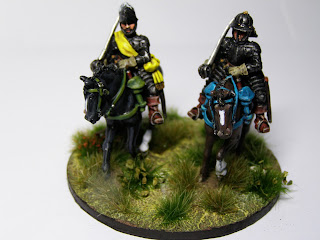 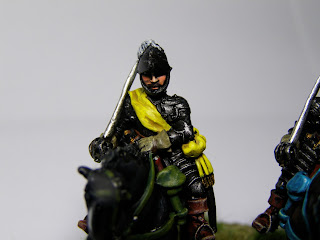 The Bicorne Cuirassiers are again excellent, and who could the commander be other than the Sir Arthur Haselrigge.  Based as a Brigade commander he can control Waller's cavalry, at least up until the times where Waller lead them on charges. 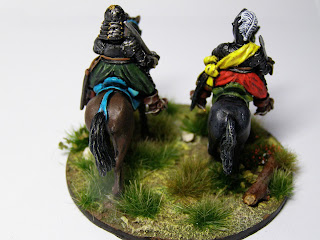 Painting commanders is a time-consuming business. These six figures took me over a month of evenings and weekend sessions, but I like to think they were worth the effort.
Posted by Jason at 00:34 14 comments: