Well that's been a while!  A longer break from blogging than expected but I am back.  I had prepared a battle report several months ago, but I just could not face making the map from the software I use - I just don't use it enough to ever get to know it properly. So after attempting to sit down and produce something and failing, in the end I deleted what I had and decided to start afresh with my latest painted pieces.  Far easier than producing a battle report! 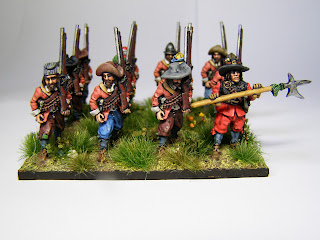 This unit represent one block of musketeers from Sir Robert Cooke's Regiment of Foote.  The Regiment was one of Waller's in the Western Army and fought in many of the actions in the West Country, either as detachments or as a regiment. 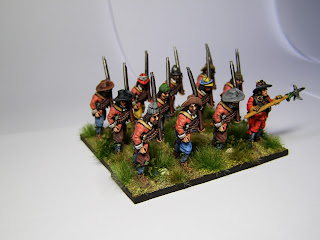 The uniform is hypothetical, but a good washed out looking red/russet gave a suitable campaign look and looks believable enough for my liking.  The contrast of the men with the officer's more expensive red uniform is deliberate. 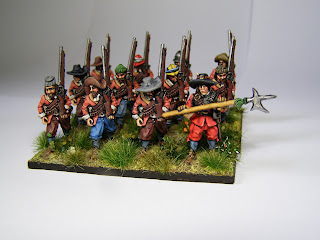 This is the 2nd block of musketeers that I have done for this unit. The pike are currently on my painting desk and as long as my Perry Samurai figures don't arrive too quickly, I should crack on with those shortly. 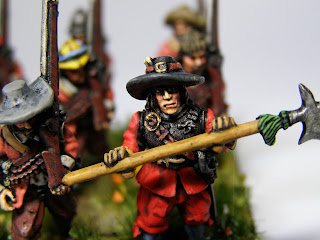 The figures are 28mm and are from the excellent Bicorne range.  In a departure from the usual 'battle ready' poses which I usually like, these are marching as you can see.  The pike have their weapons over their shoulders also marching too and I will post pics of these once I have competed them.  This pose should make a nice contrast to the other troops that I have so far. 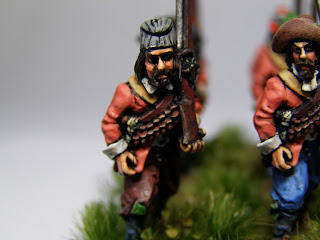 I started these last week as I went on holiday into the mountains of Wales for a week. I took all my paints and many of my modelling tools, and I spent my perfect week, walking, reading and painting.  Just what I needed!   I read Brigadier Peter Young's Cropredy Bridge book which was very inspiring and ensured that I put lots of effort into these fellows. 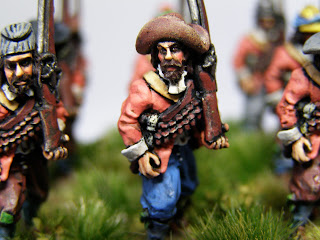 Most of the paints used were from the Foundry Triad paint system and gave very satisfactory results. 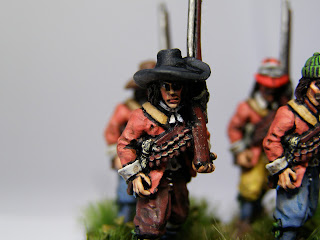 A few close ups below. 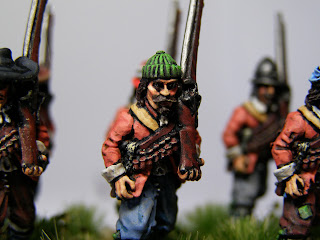 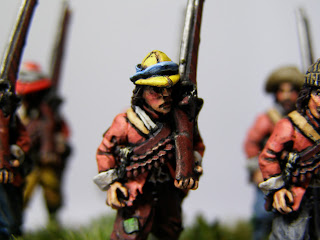 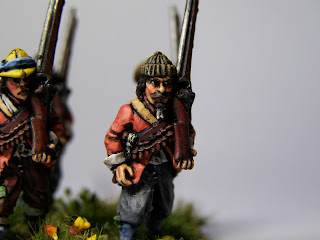 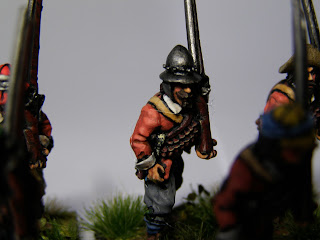 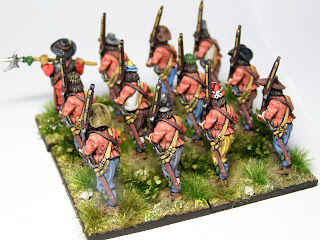 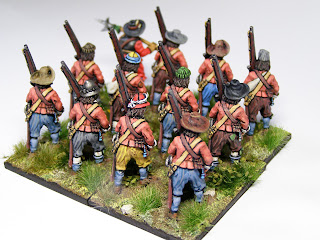 I usually paint the name of the unit beneath the stand.  I don't know why I have until now been so averse to using printed labels instead.  I think I assumed that it would make the magnetic base fail to stick to its travelling cases, though it actually makes little difference.  Once I found 'Old English' as a script then I knew that the labels had to be done! 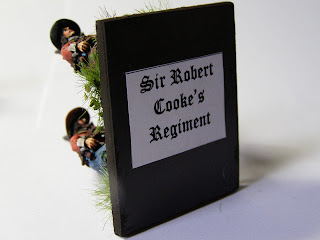 Well now, that didn't take too long to publish!  Hopefully another posting soon - I have been busy painting.
Posted by Jason at 01:59 13 comments: