...Nope not a weekend spent in Luton but a change of period.  As ever, I have returned to another one of my historical interests which has been too long dormant. 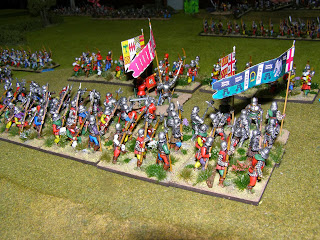 I painted my Wars of the Roses armies between about 1998 and 2000.  I remember that I spent 2 years immersed in that period without leaving it to paint a figure of a different era during that time. I haven't done that before or since!  I tend to go in cycles of 4 to 8 months or so before, like some time traveller, I land in a different era (hopefully one for which I have books and figures for already...or it gets expensive suddenly!).

Until last month I was re-painting my Prussian 1870 army when I just about finished and was about to start on the French when I just decided to have a look at my long neglected Yorkists and Lancastrians.  The French are now under their bubble-wrap dust cover and taking a rest as Medievals took precedence!  The enthusiasm just bit me like that!

I only played with my Wars of the Roses Army once before.  It was a game using Warhammer rules around 2004 with two potential new gamers.  Unfortunately the masses of dice throwing for hordes of archers and the slogfest of erosion just didn't seem to do it for them and enjoyment seemed minimal.  One them since has returned for WW2 games.  Clearly manoeuvre and short punchy actions are more to his liking. I couldn't blame them. Even I had found it dull and I had just devoted 2 years to building the armies up!  So into hibernation the troops went...until now... 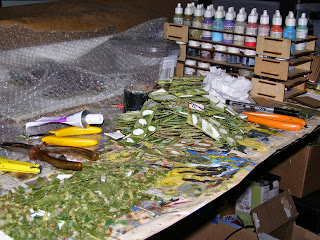 The giant re-basing session under way

I have done a lot of re-basing and re-organising in the last two years.  My wargaming has increased as I have found rules that have made playing so much more enjoyable.  More wargaming playing time (increasing ten-fold!) with my regular opponent, Ian, has meant that I've allocated more resources and effort to something I'm really enjoying.  This has co-incided exactly with reading blogs and blogging.  So I blame you all for my increase in spending!

2011 was the year discovering the rule set 'Hail Caesar' which led to my re-basing and re-organising my Imperial Romans and Ancient Britons (and my first blog posts). 2012 was Pike and Shotte and the not inconsiderable effort of re-basing my English Civil War collection. Now my even bigger collection (near on 500 figures) of Wars of the Roses troops was going to have their day. 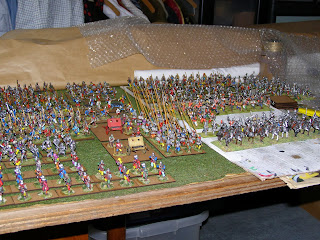 Work in progress - MDF bases for all troops!

A good sized parcel of laser cut MDF bases from 'Products for Wargamers', A large bag of builders sand and brown tubs of Acrylic paint was purchased from B &Q for basing texture. This was lot cheaper that that old Basetex stuff I used to buy once.  I purchased more plants and grass tufts than contained at Kew Gardens for a goodly sum at Colours at Newbury in September. 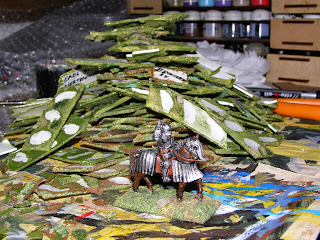 The re-basing has taken exactly a month so far.  The work has been even more intense than I expected.  With two jobs and other things in life going on, I have done probably too many late nights doing this re-basing until 3am!  I have even tried squeezing in 15 minutes or so before dashing off to work in the mornings.  Obsessed...what me?! 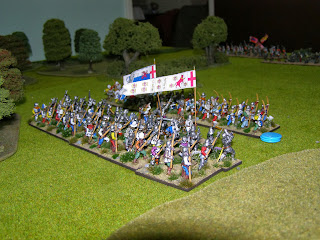 The re-basing isn't quite complete yet. The troops are all on MDF bases and basing texture has been applied.  I have completed about half of the stands now with the full 20 stage painting/planting process ( I type up all my painting/basing processes in case I forget a sequence!).

A Game report - Sneaked in at the end!
One incentive for all the work was preparation for the game I played last night with Ian.  The board layout was based roughly on Tewkesbury. The rules were Hail Caesar with a few modifications and game additions.  Archers were allowed a max of 2 moves prior to fire. Crossbows and handgunners were allowed one move and fire only.  Arrows sheaths were diced for using an average dice,  i.e a 'two' on the average dice meant the archers could only shoot for two turns (the blue counters shown in the above photo).  This could influence tactics. Few arrows to fire would encourage coming to grips sooner.

Wind direction was also diced for. A wind from behind would increase archery distances for that side by 4 inches for the entire game.  In this game however, the dice decided that wind would be nil. 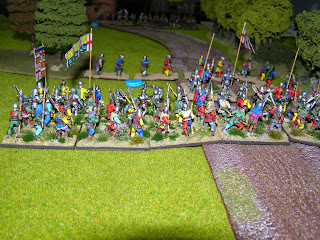 There was also the possibility of one side receiving reinforcements. The pre-game brief stated that the scouts of both armies had reported a battle going on some miles distant. This was the clash of both sides reinforcements. Only one side would possibly benefit from their arrival depending on the victor of the off-board clash.  This was decided at the end of each turn by the drawing of a card. A royal card would signify their arrival. The highest D6 would decide on who's side.  The cards were an online purchase last week.  I decided that if I was going to use cards then I wanted medieval ones. I was overjoyed to find a set of 15th century copies! The purchase was immediately made. Small details like this really add something for me. 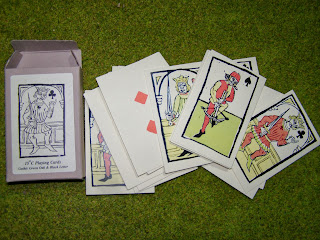 What better way could there be to decide on reinforcements? 15th Century cards

I'll summarise the rest of the game as I've gone on long enough!  Both sides consisted of the standard 3 battles facing each other as an encounter game. I played Yorkist with Edward IV as my commander. Ian had the Earl of Oxford as his commander. Both commanders were in the thick of things throughout.  I had planned to play on the defensive but my arrow supply was minimal so I decided to send my wings forward. Edward's wing bounded forward well, but Fauconberg's men were less willing. Ian advanced his forces and after the arrow-storm, the billmen and men at arms clashed.  One of my archer contingents failed to move out of the way quick enough but held out well against Oxford's wing. I supported my archers (fighting by now with buckler and falchion) with billmen and men at arms behind them. Oxford himself was wounded.

On my right wing Edward led his wing forward and they successfully defeated the crossbowmen of the Duke of Exeter. They forced back Exeter's wing for several turns before, horror of horrors, Edward was struck down!  The following turn led to both sides retreating their opposing wings due to all of the units being shaken on that side of the board.

The centres engaged in an archery duel which continued until the end of the game. 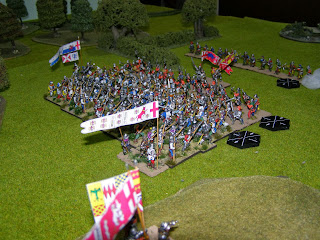 Conclusion
This was one of those games that needed a day or so to reflect on.  The game itself was interesting as it seemed to reflect a typical Wars of the Roses battle very well;  Archers cancelled each other out, the infantry attacked each other and after a really hard grinding battle, units wore down and commanders were killed in the centre of the press.  But there was little manoeuvre, no blitzkriegs, no tactical outflanking surprises as 'Black Powder' delighted us with.  But then again should we have expected that in this battle?  The hard grinding combat was at is was historically. With two sides of the same troop types, the rules did very well in making it very realistic. It wasn't the most exciting of games though.  I shall have to devise some interesting scenarios or perhaps look at varied troop types or pick more interesting battles (such as Northampton or Bosworth or Stoke Field) where different or exotic troop types or treachery could play its part.

The little touches like using cards for the possibility of reinforcements (who didn't actually show up after all in this game) and dicing for wind direction and arrow supply helped to make it interesting.  The Wars of the Roses would make excellent campaign games so that is another route.

So unlike last time, I will be continuing with my work on the medieval armies!
Posted by Jason at 01:01 12 comments: