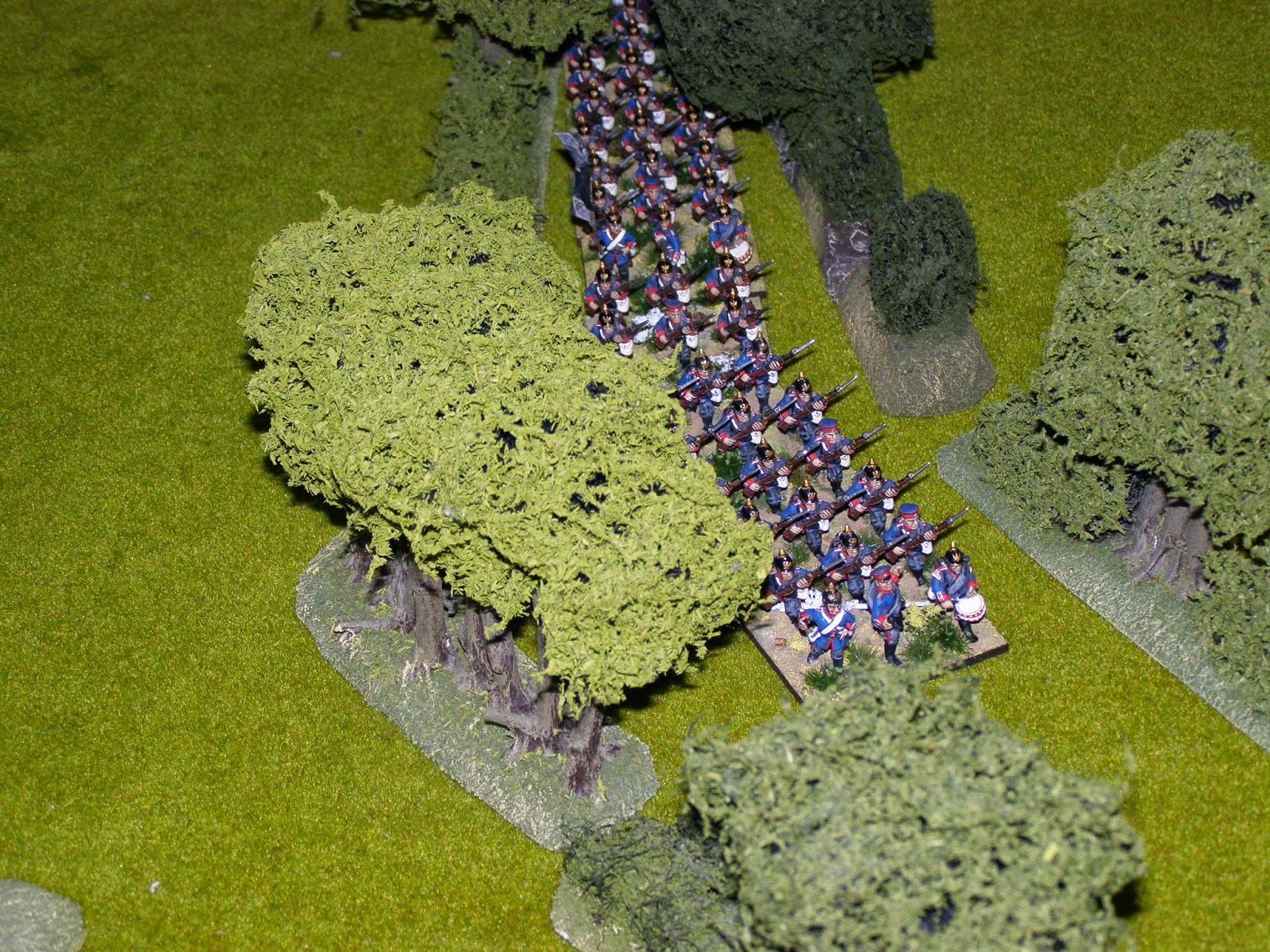 After a couple of months of playing X-wing as our monthly game, it was time to get the lead back onto the table again.  This time it was to be 'Black Powder' rules and the Franco-Prussian War.

I chose to play this period again for several reasons. Not least that the uniforms are simply wonderful.  A joy to see and to paint...and not as much lace work generally as Napoleonics!  A recent purchase of another Chassepot Rifle also inspired me.

I had started a big re-basing project following an experimental game of Black Powder played last year.  This started me on the switch from 'They Died for Glory' to Black Powder for Franco-Prussian.  That game showed a lot of potential and I decided upon re-basing - not least so that my march columns didn't have to be 5 figures wide for the Prussian's.  As I successfully completed the Prussians, however, as so often happens another period of history caught my attention and from May 2013 my Frenchmen bivouacked beneath some bubblewrap sheeting awaiting their turn at being re-based.

The prospect of another game lead to me spending an intensive 2 weeks which nearly completed the re-basing. So nearly... but not quite!  You will notice that my French infantry have no vegetation at all on their bases. This laborious process will have to wait.

In addition I took the opportunity to increase the sizes of my French units.  I dislike 12-figure battalions.  It just looks too small.  So a small increase to 16-figures will improve the appearance for me whilst still maintaining the Prussians at 24 figs - proportionally larger battalions as they should be.  I say this also as I have to paint these extra Frenchmen.  The gaps have been left on the bases for them though! 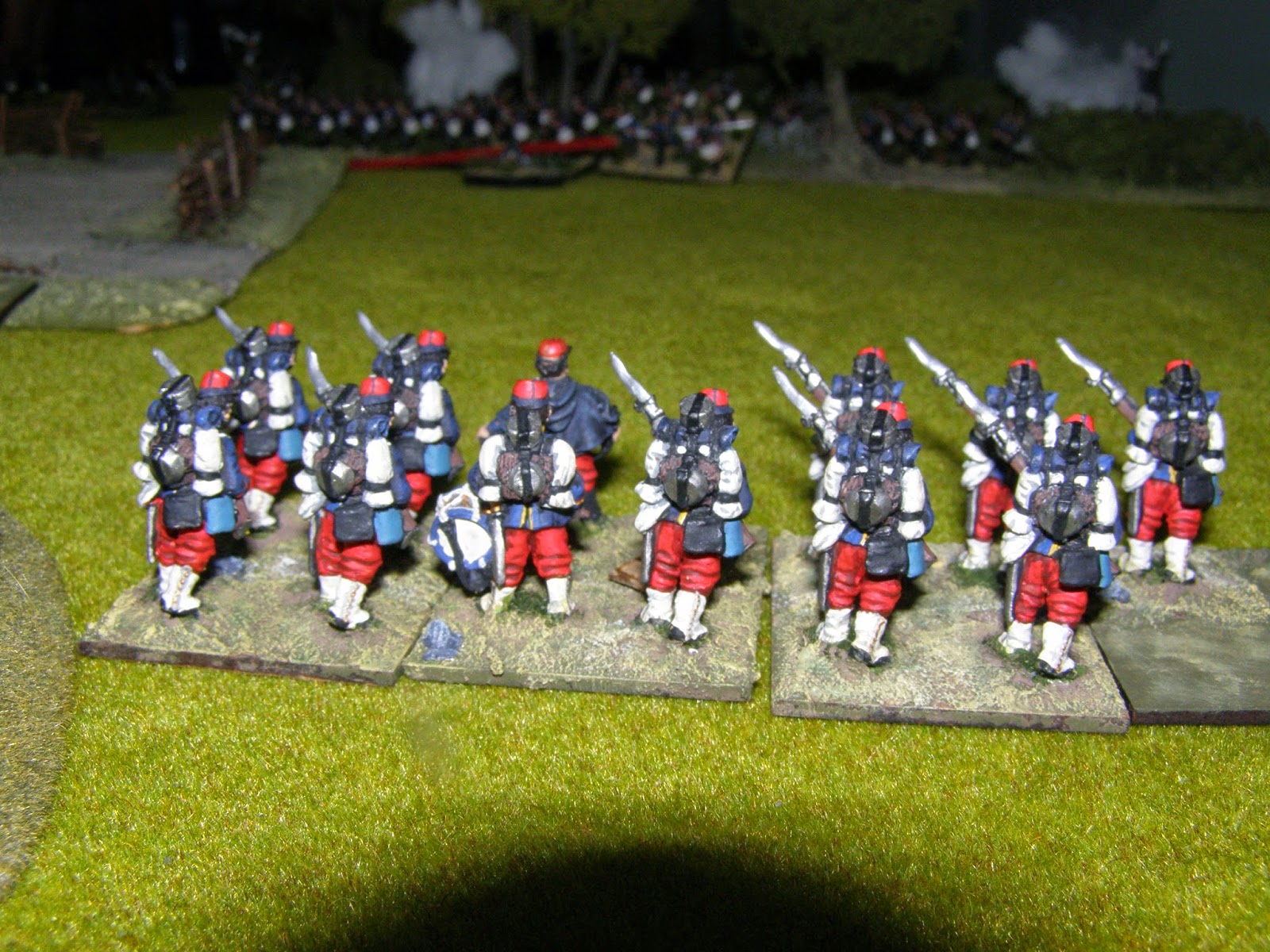 The French Army is withdrawing towards Metz.  The Prussians are trying to keep in contact with the French rearguard, however, contact has again been lost.

To delay the Prussians further a French rearguard has been left to delay them.  The Prussians need to locate the rearguard and throw them back so they can resume their advance and catch the main body of the withdrawing French.

Your Uhlans have lost contact with the French rearguard.  You must make haste and continue the advance with your division. You suspect that you will encounter the French on the high ground over looking your current position. Once found you must attack. No further time must be wasted.  The summer foliage is high and static units will be hidden by the lush summer hedgerows and cornfields. French static units will remain hidden until they decide to move.  The French can deploy hidden units 2 feet onto the board from their table edge (marked on their map) other units can appear anywhere within 1 foot of their board edge.

Your division has been ordered to hold back the Prussian advance guard and if possible destroy them! Your brigades have been ordered to lay low. The men are not to wander about or use fires to cook with. The Prussian scouts have not been seen for some time - maybe they have gone back to Berlin? If they haven't then they must be made to wish that they had done so.  Take care to plot your hidden units well on the map!

The Prussians were clearly in a hurry as the Prussian Infantry rapidly came on in march column on the North of the table and the Bavarians doing the same at the Southern end.  Due to the movement advantages of being in march column this nearly brought the Bavarians up to my first hidden unit - chasseur infantry deployed at the edge of a wood. The chassepot fire rips into the Bavarian column causing 2 stamina point loss out of 3 and disorder. 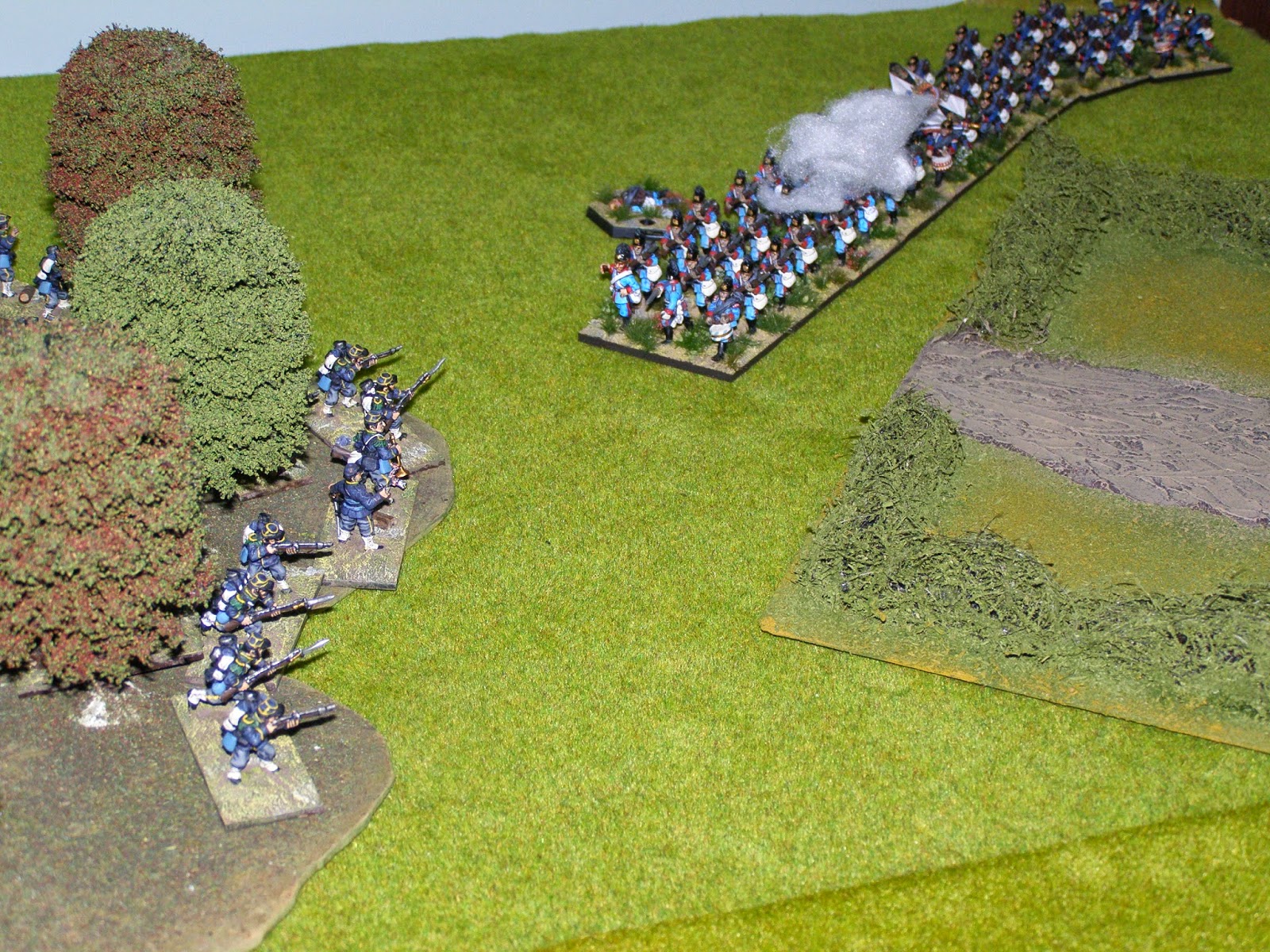 The first deadly ripple of Chassepot fire scythes the Bavarians down

A more general advance occurs. The Prussians move up supporting columns on both ends of the board and bring on a cavalry brigade in the centre.  Lots of movement - I start to wonder if we will get past turn 4! 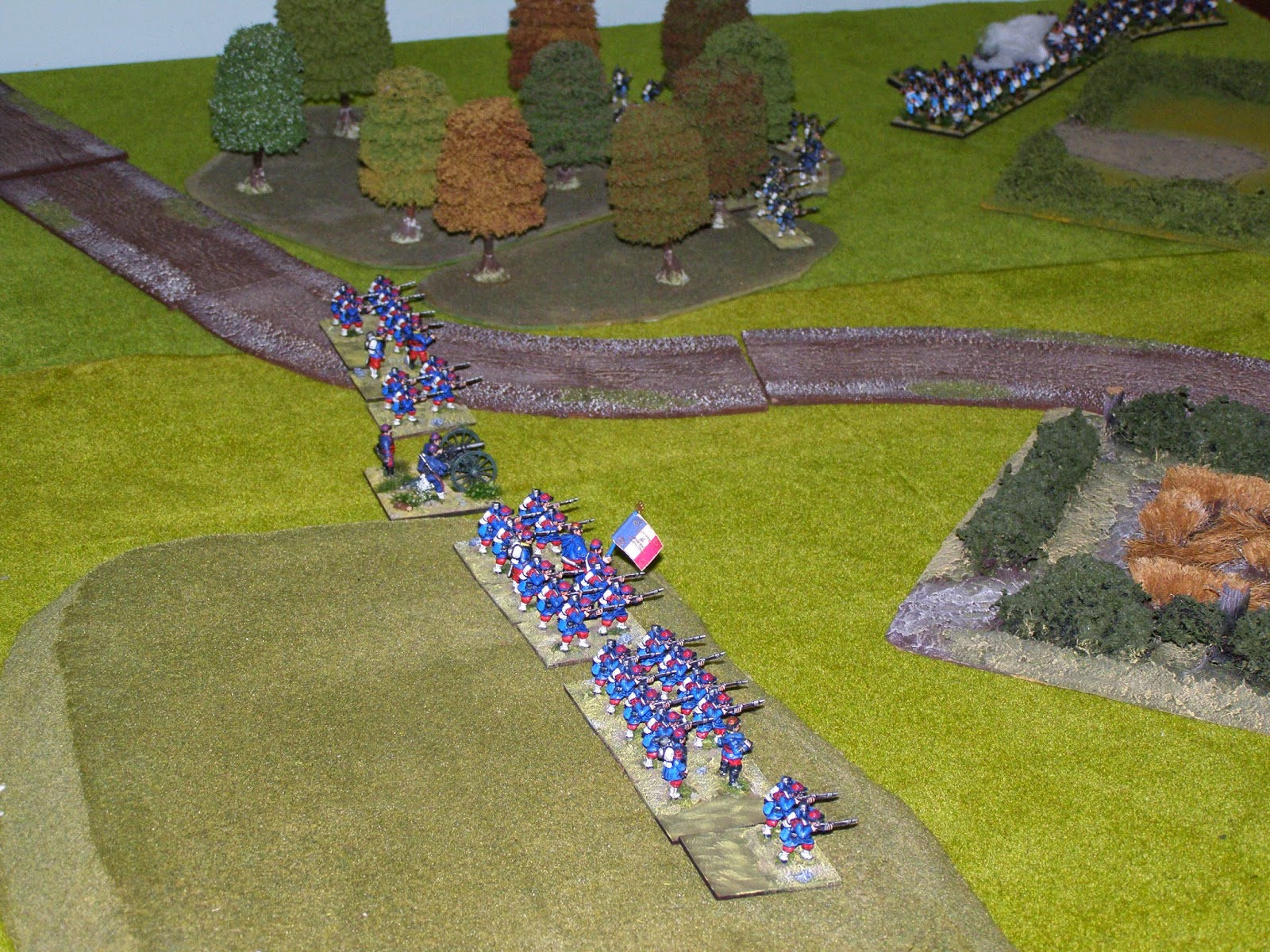 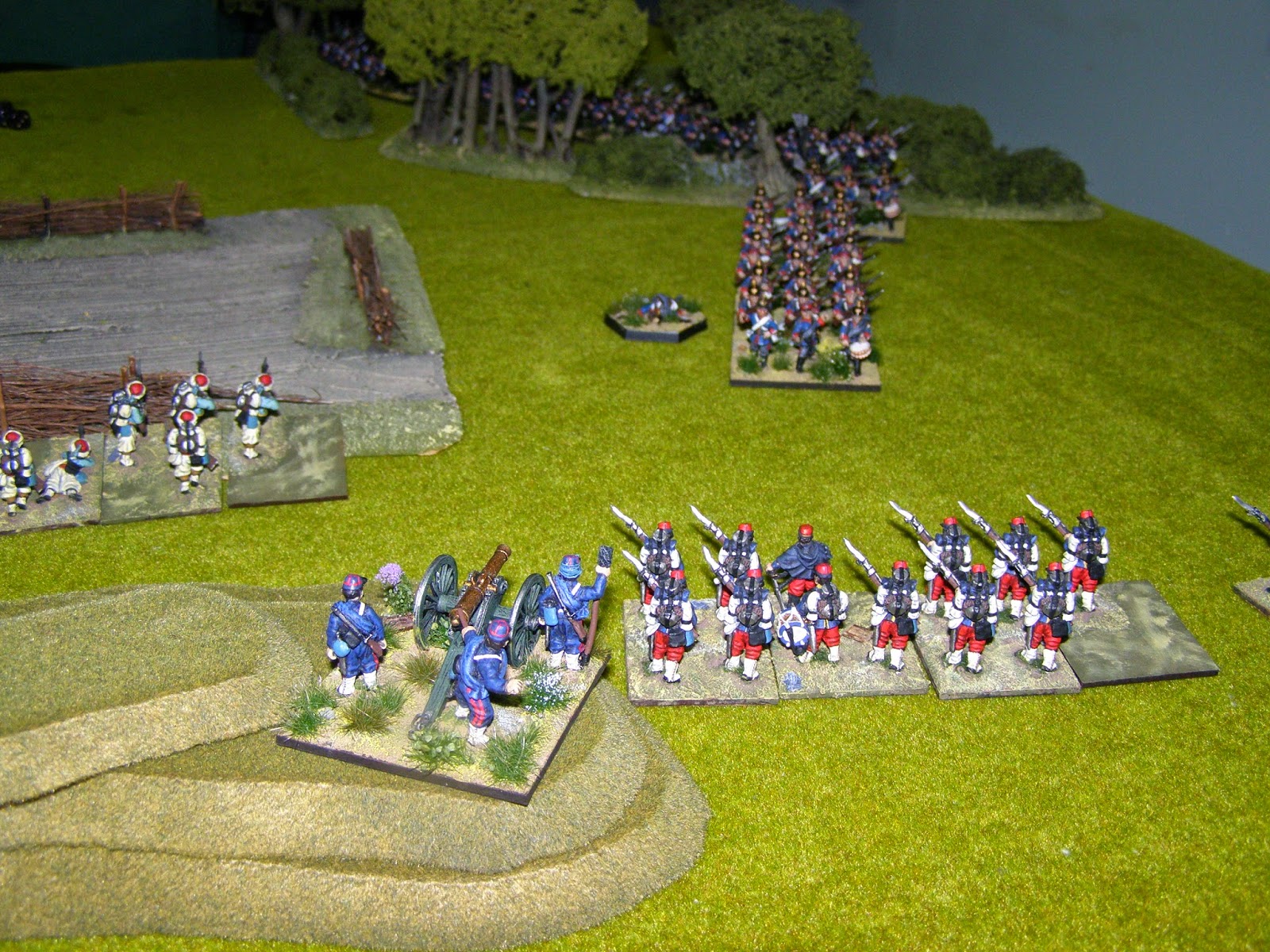 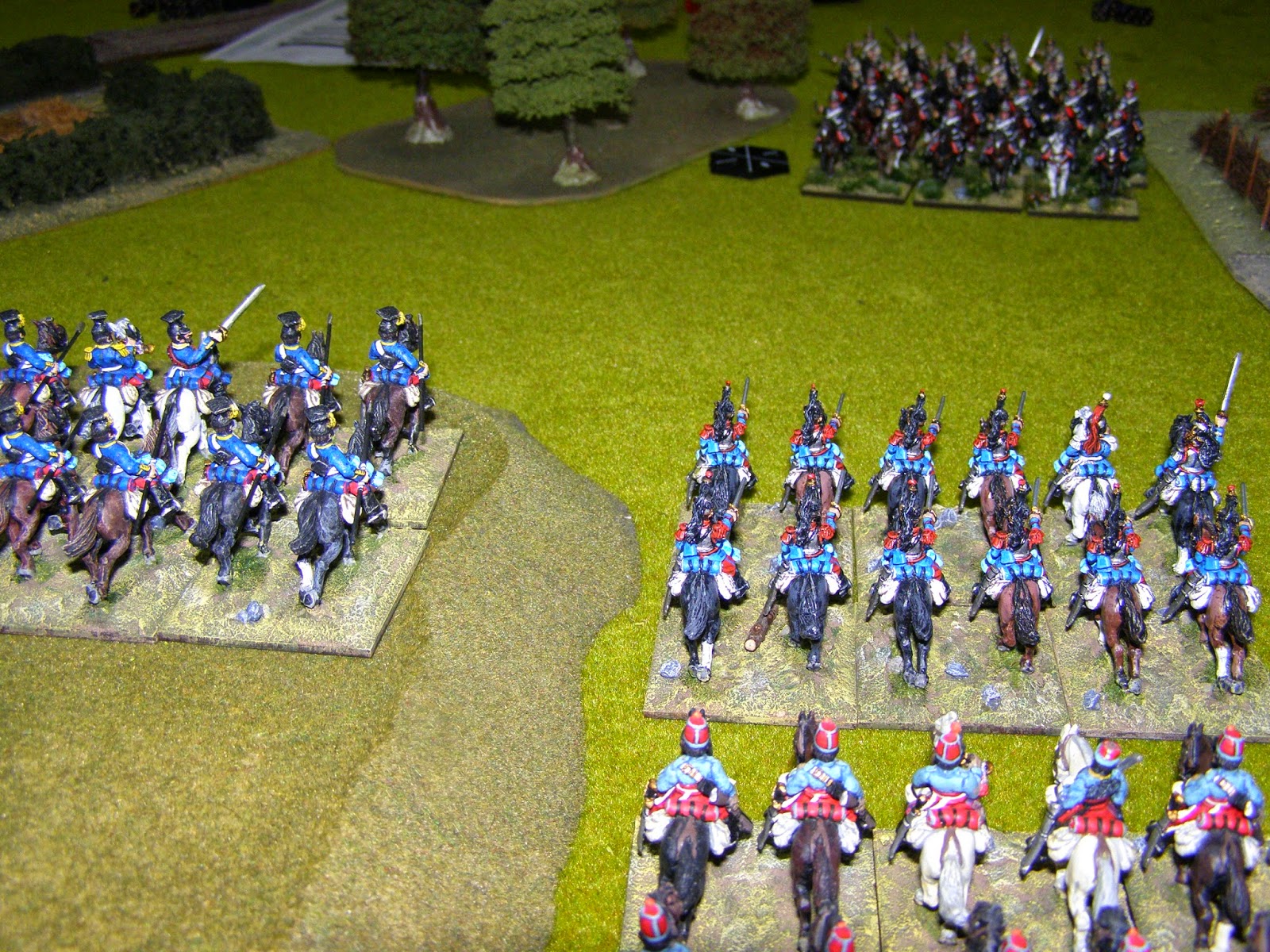 At the North end of the board a rifle duel occurs as the Bavarians and other supporting battalions form line and take on the Chasseur infantry in the woods.  The Krupp guns, however, are stuck behind the infantry lines and are unable to participate.

The only French movement is an advance of the cavalry brigade to face their opposite cavalry foes. 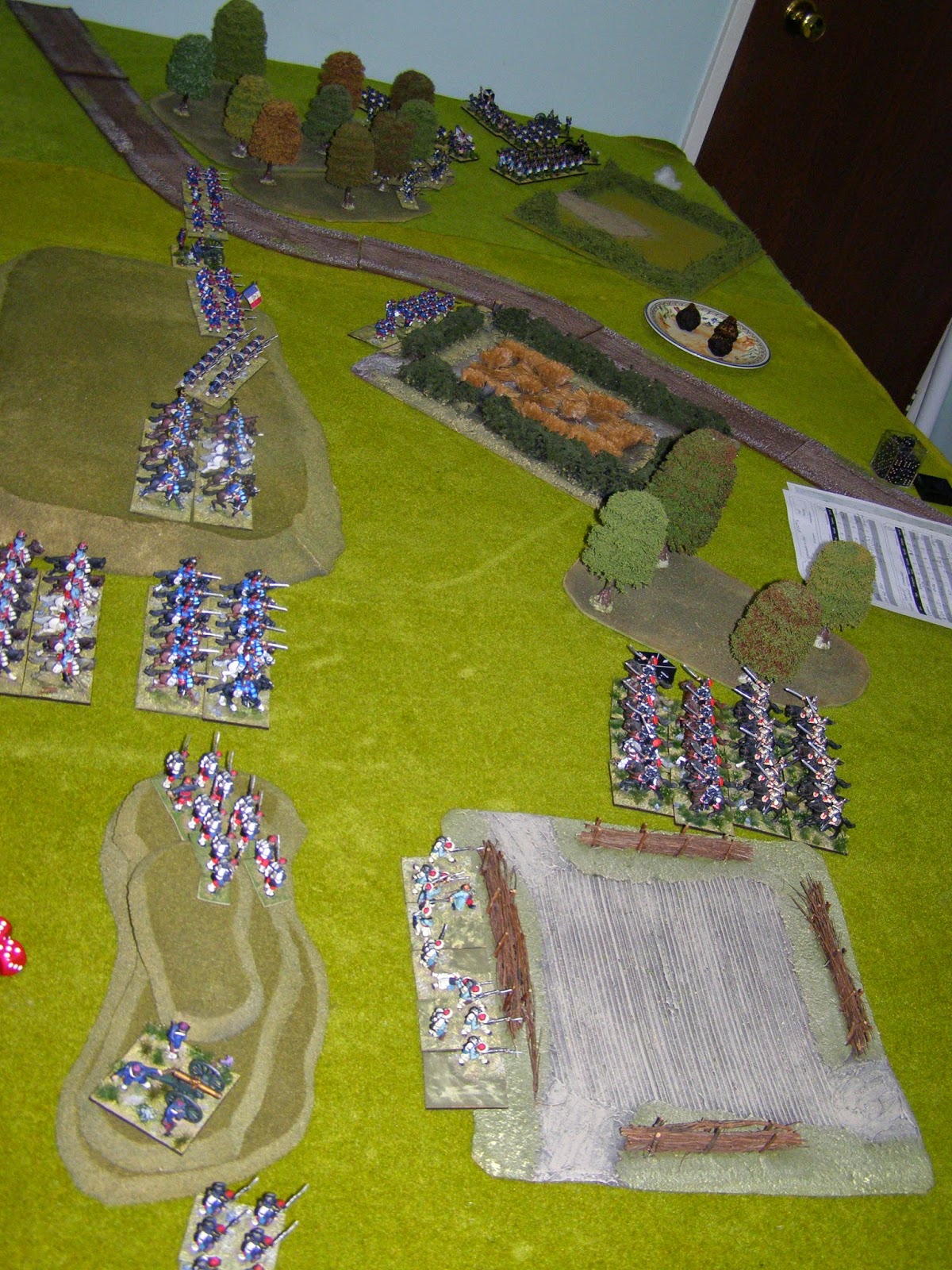 An overview from the North end looking south 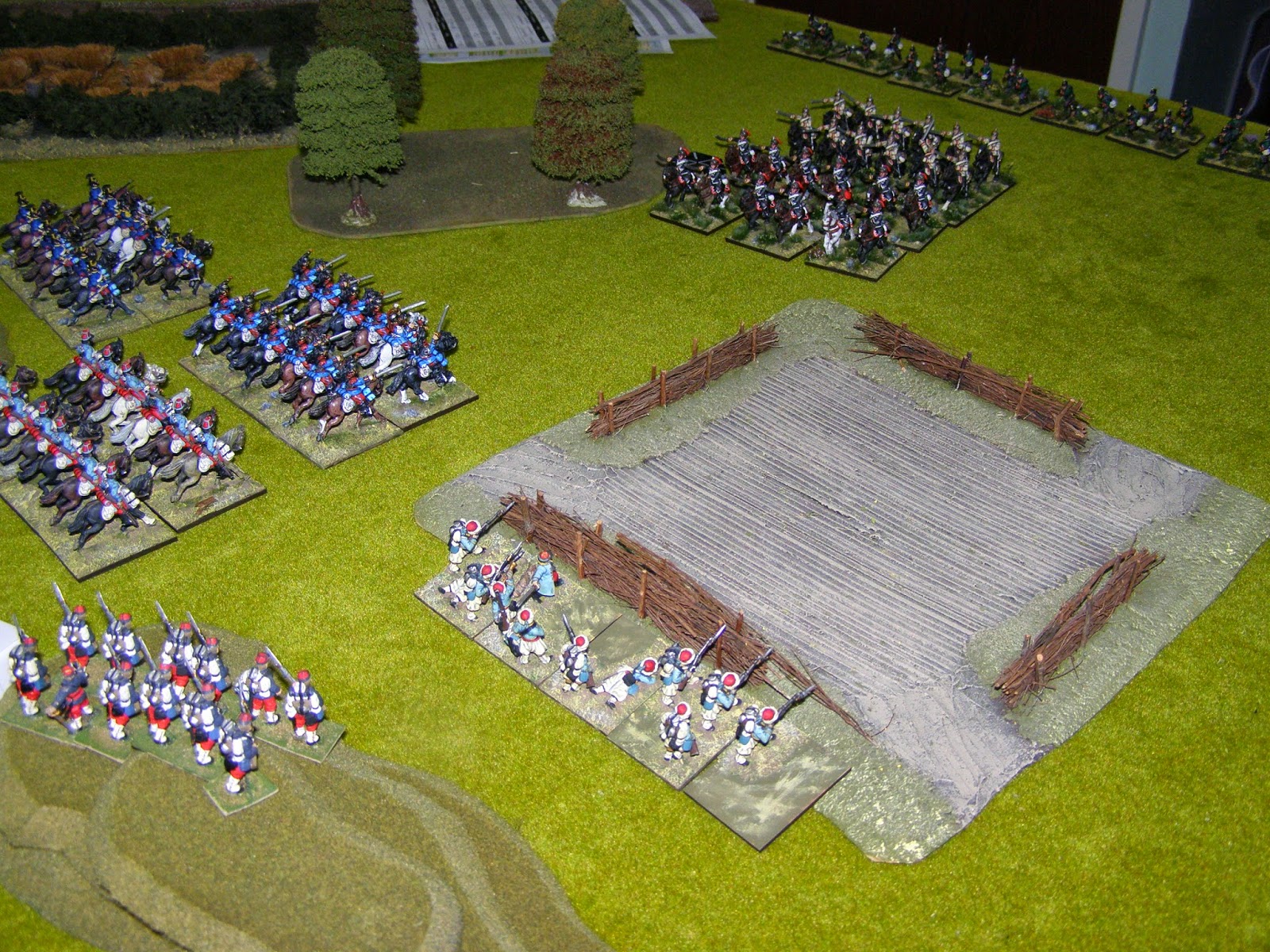 The Turcos show themselves from hiding, as the cavalry face each other

Most units remain stationery and engage in the firefights.  One French battalion moves to support the Chasseur battalion who are holding firm against a Prussian/Bavarian brigade.  Their accurate rifle fire disorders any attempts to receive orders and the Prussians and Bavarians are pinned horribly in the open. 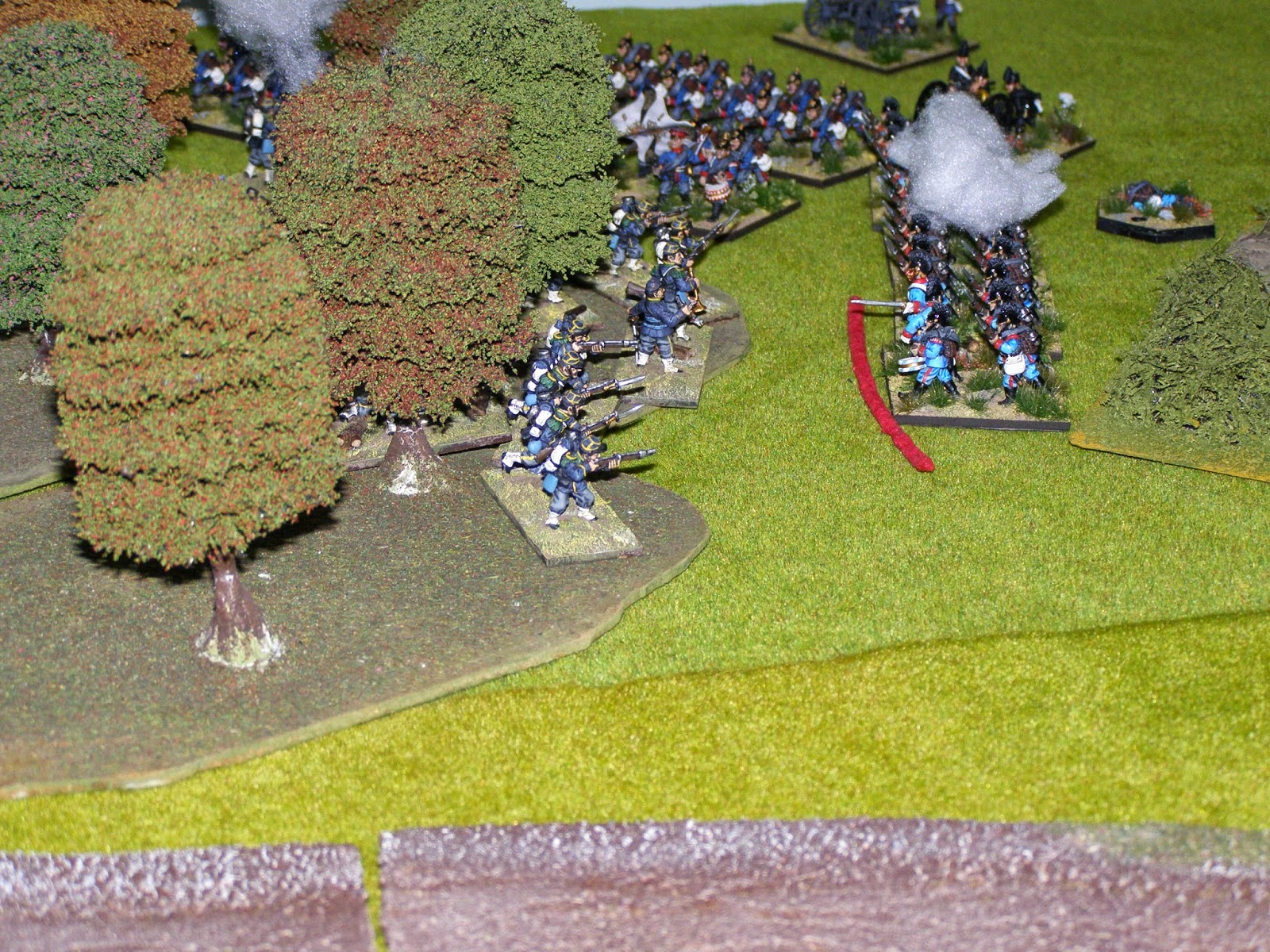 Worn down and pinned the Bavarians become shaken

The Infantry remain static on both sides as rifle fire rips across the board.  Most Prussian infantry dare not move or cannot due to the disorder markers rapidly appearing each turn.  The Prussian cavalry charges to be countercharged by the French cavalry. The Brigades clash and the weaker Prussian force recoils back. 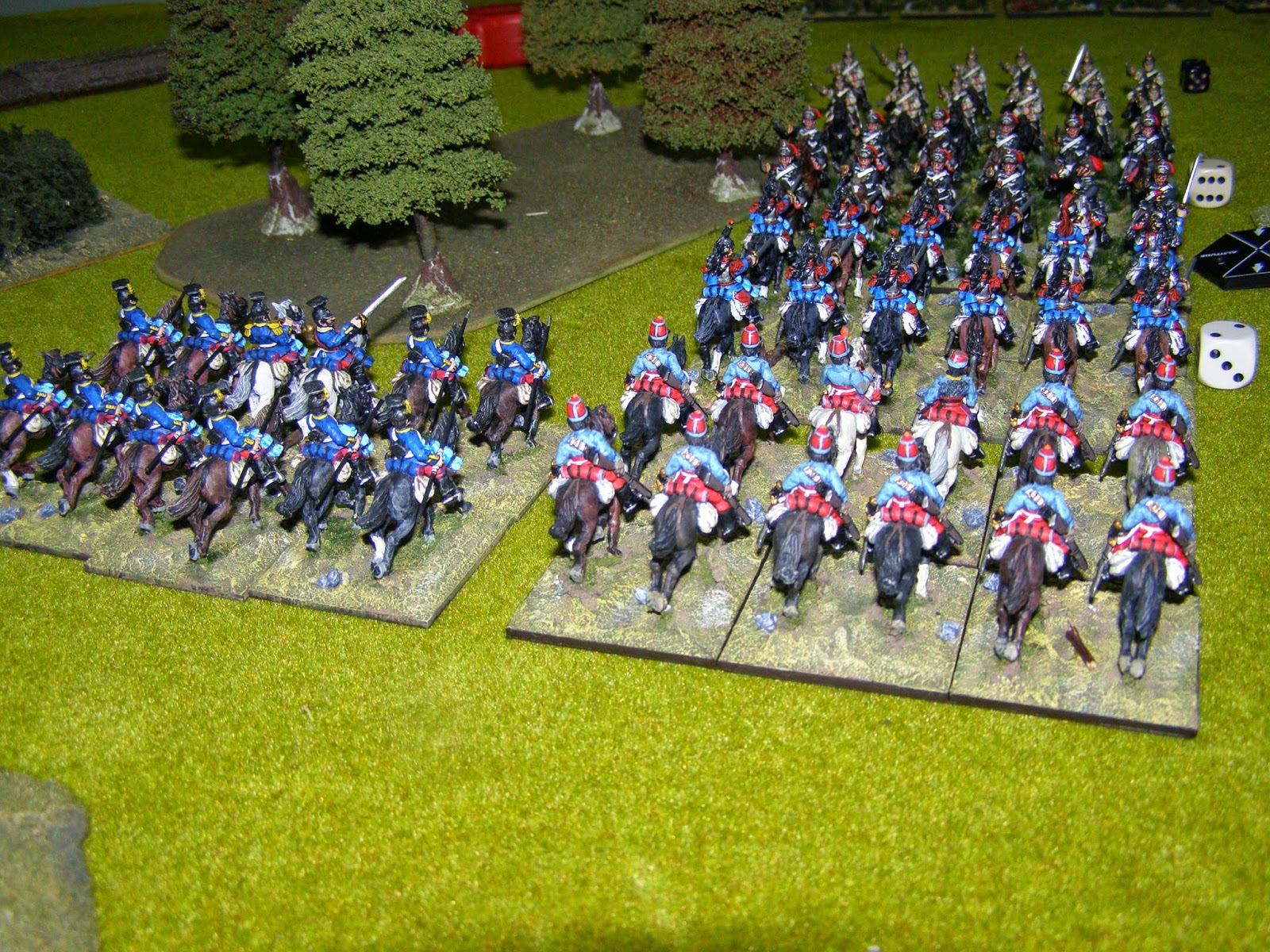 The cavalry action concludes as the Prussian Kurrassiers break the Chasseurs d'Afrique.  The French cavalry brigade is now broken and collectively retire off the board.

Things look bad for the French until they put more rifle fire down.  Chassepots shake the 3/35 Infantry Regiment and then break the glorious Kurrassiers. 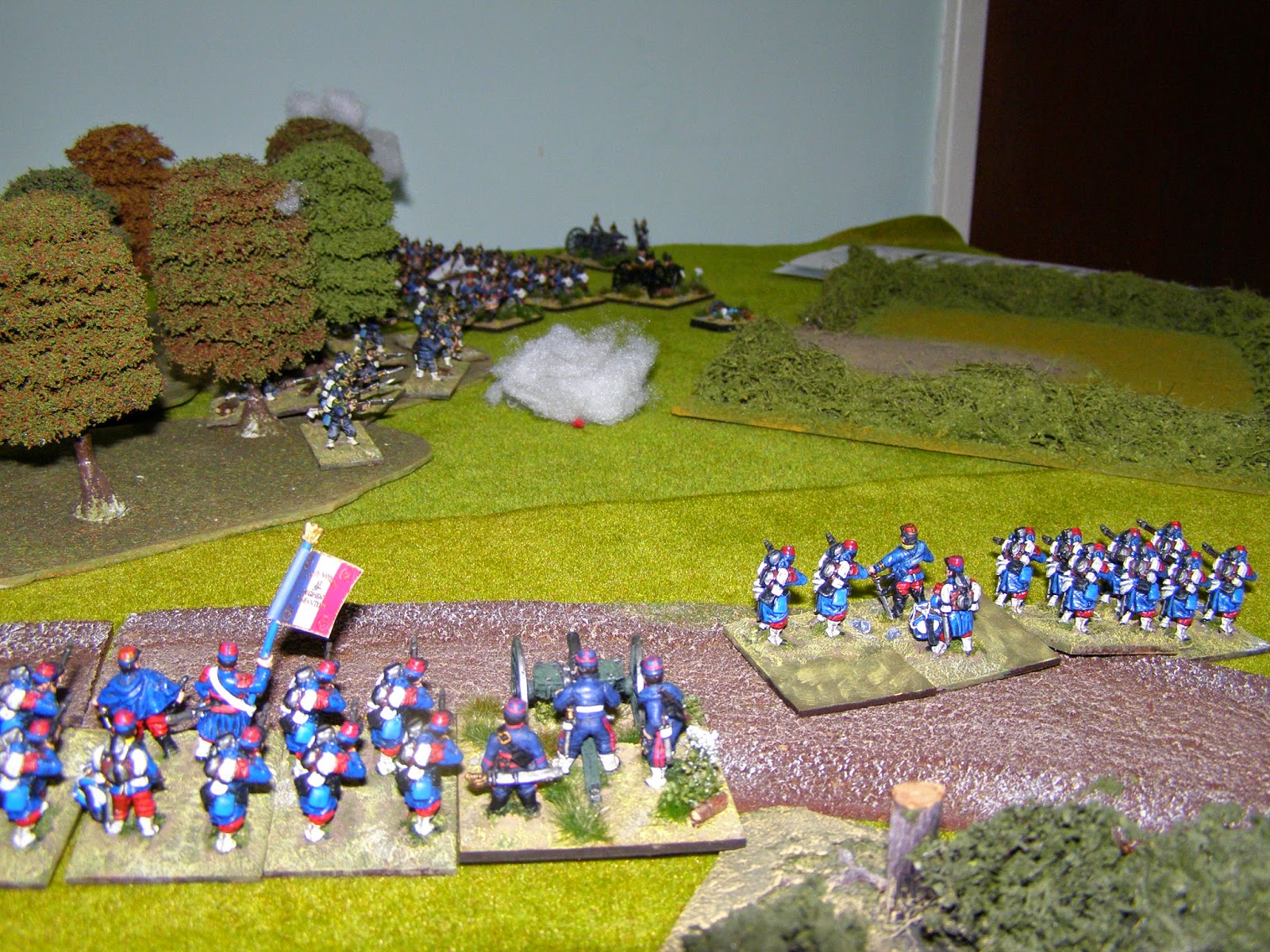 The Prussian cavalry brigade breaks and retires.  The French Infantry on the Northern flank having successfully advance forward in the preceding turn now open a deadly enfilade fire with a whole battalion and a mitrailleuse on to the weakened Bavarians, who rapidly break.

The Prussian's concede the game.

This was an interesting game which I would like to replay, perhaps as a solo game or taking the part of the Prussians.  I'm not sure whether this was one of those really rare wargaming occasions where nearly everything went right for me or whether a combination of the scenario rules and rules themselves made this too difficult for the Prussians.

I thought it was realistic in that when the Prussians came on unsupported, they were severely punished by accurate rifle fire.  One of the key historical Prussian Centre's of Gravity just did not come into play.  The Krupp guns got fouled up in their deployment and were ineffective and underused.  The traditional duel between Krupp and Chassepot just didn't happen, leaving the field to be swept by French rifle fire.

For the Prussian player the effect of this firepower was quite frustrating as units became disordered and refused orders.  The opposite effect for the French player was that my tactics were working!  It is arguable that this was indeed very realistic - especially as the Prussians did not scout using cavalry or skirmishers to find the hidden units or attempt to cover attack columns. Having said that the main purpose of a wargame is that both players enjoy it - so I wonder whether I need to make some more tweaks, either to the rules or scenario.  I shall give this further thought.

What is certainly true is that as I have at last got a decent sized collection of Franco-Prussian War figures, it means that there are less open spaces on my 8 x 4 feet table.  There is no possibility of using pinning attacks in the centre and launching wide flanking attacks to roll up lines.  There just isn't the space or the depth to do clever manoeuvres.  One skirmish battalion can cover much of the board in physical occupation and firepower.  So it looks like a bigger board (and thus a move to the living room!) is needed.

The game has given me sufficient impetus to paint more units and get back into the period again, so this makes it worthwhile in itself,  I just need to satisfy myself that the modified rules work and give more consideration to taking over the living room with my hobby!

With the absence of the Colours show from Newbury this year, Ian came up with the great idea of going to Derby to the World Wargames show.

I could see the connection.  At Newbury you can just about see Donningon Castle in the distance, famously besieged during the English Civil War and at Derby you can see Castle Donington.  It all made perfect sense to me!  More importantly it allowed one more big spending session before the winter and the next show in the diary in March 2015 (coursework permitting).

The show was held in the spacious Exhibition Centre and after a fabulously easy 2 hour drive assisted by my behaving sat-nav (misbehaved on the way home but came back on for the last 3 miles!).

I'm sure there is a good reason why it is called the World Wargames show.  I once attended the World Hunter Field Target Air Rifle Championships and I think there was a Polish fellow or two to break up the dominating attendance of the locals.  I didn't hear any overseas accents at the event in Derby, however, the gamers were clearly all enjoying themselves on the large number of tables being played over and it is likely they were otherwise engrossed.

Now I know from the past that pictures of shopping hauls don't get much in the way of comments from my fellow bloggers.  I am aware though that my posting has declined of late due to other commitments and I also want a record of my day out, and purchases (so I don't spend so much next time!)

So here comes the photos...! 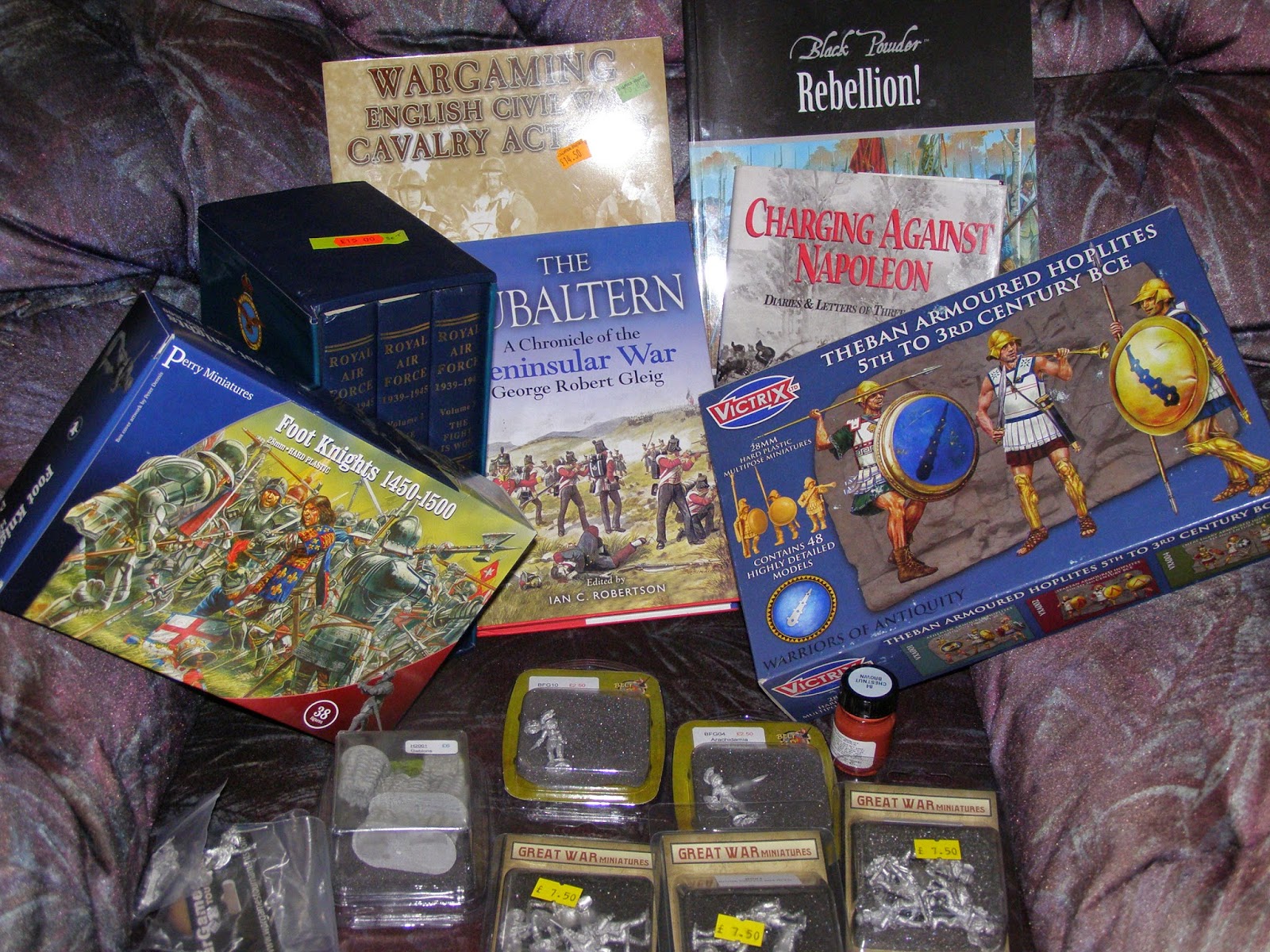 Here we have the purchases all laid out together.  A complete mix of thousands of years of history. I used to have a lead mountain.  These days I have nice tidy towers of Plastic Victrix and Perry Figures boxes! 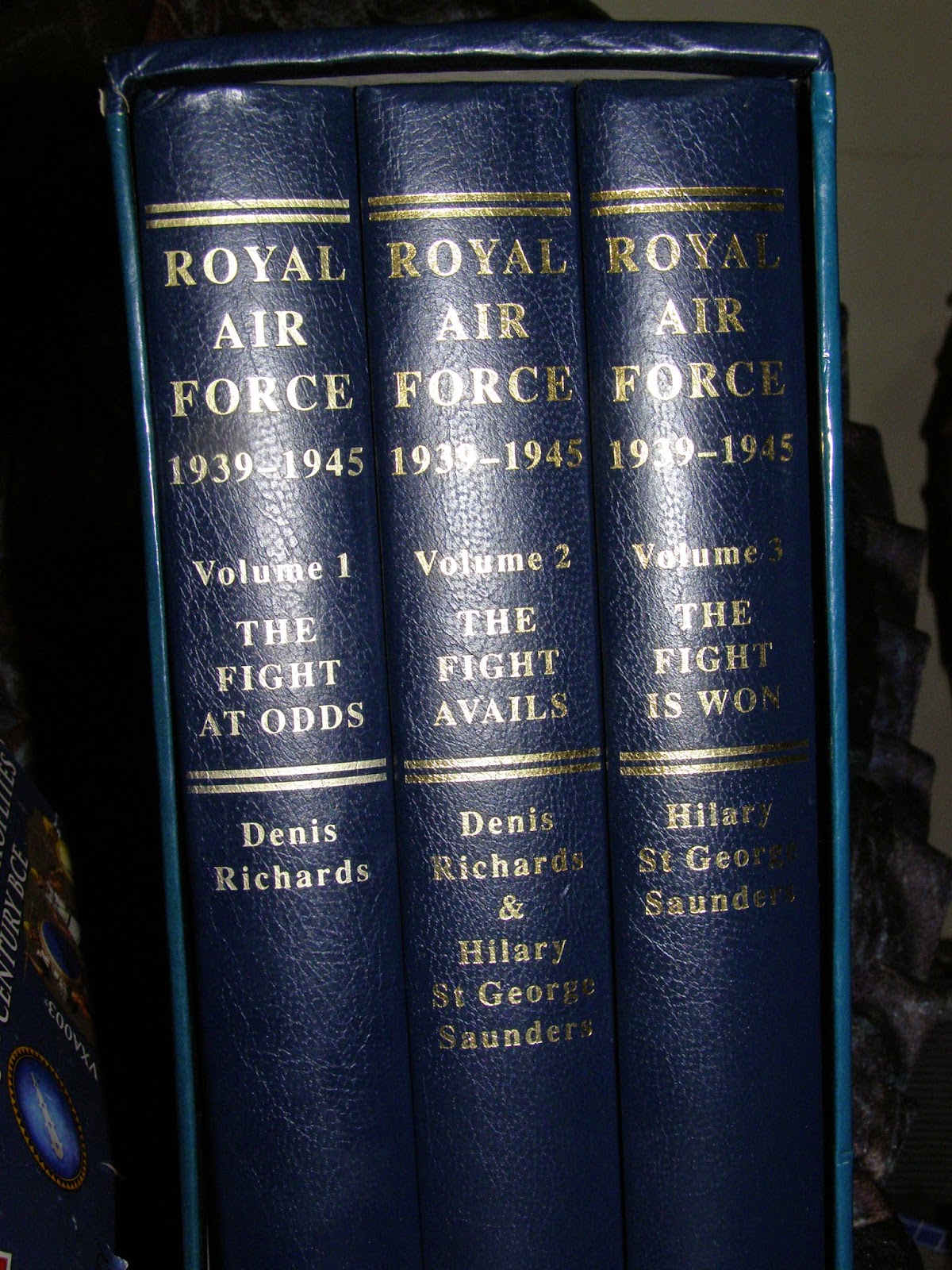 Now this was a fabulous purchase.  I was just leaving the show when I saw this collection of RAF history. It was not on my list of things to get but I couldn't leave without it as I knew I would regret not buying them.  They look superb in my bookcase and yes they will get read, and no doubt used as research material too.  For £15 I was very happy indeed. 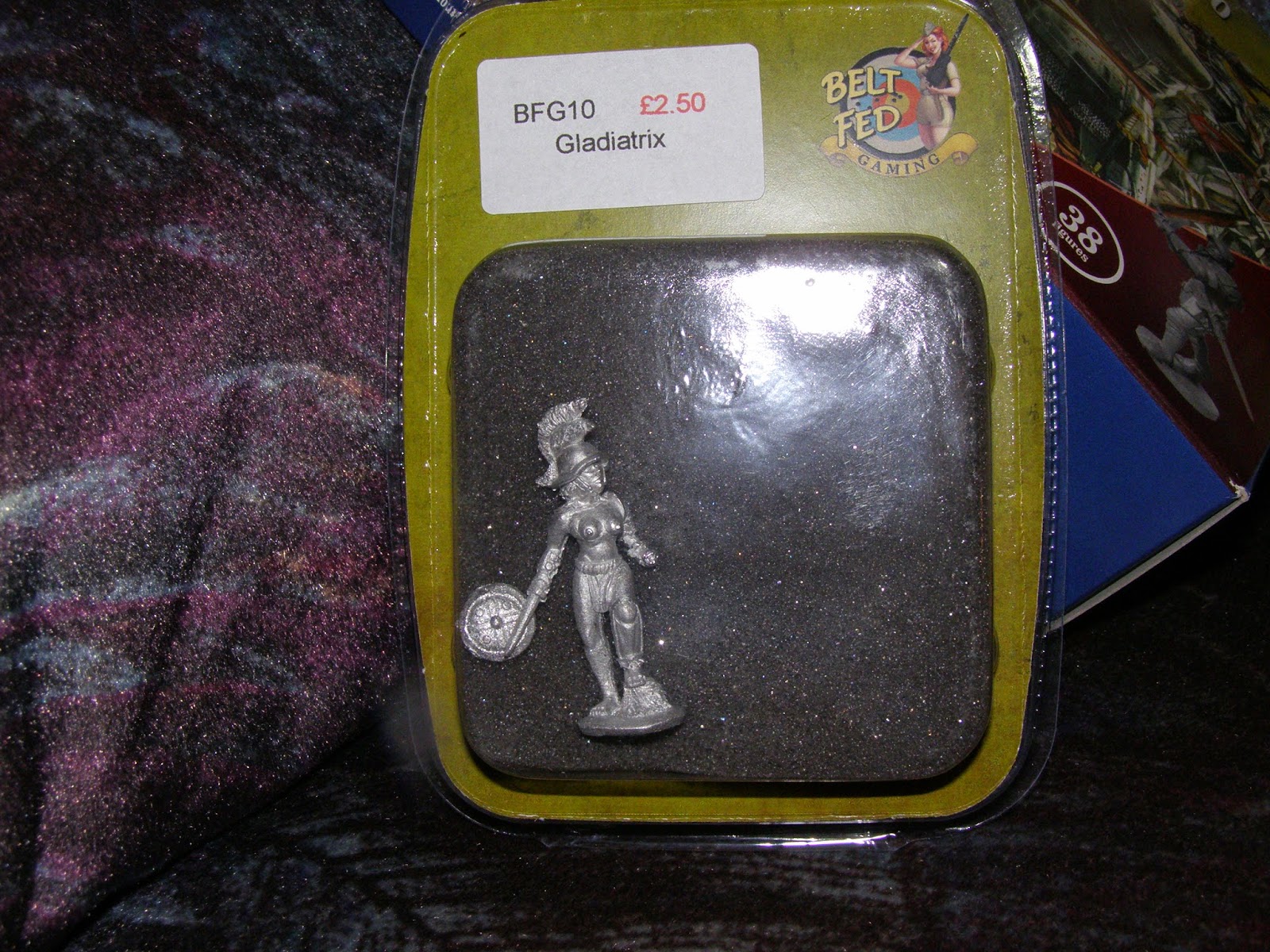 Now to spoil the studious nature that you will have formed of me by now!  I couldn't resist making a fun purchase too from this rather amusing range.  I imagine that a touch of paint will bring it to life quite nicely.  It has already raised eyebrows so I will have to be careful where I display this fine lady.  I had better find a good hiding place in case the vicar ever comes over for tea!