The Earl of Manchester's Regiment of Foote

At last! The regiment is complete.The last couple of weeks have been spent doing the final musket 'wing' and the last 4 pikemen to add to my new larger units.  This is how the full 40 figure regiment looks. 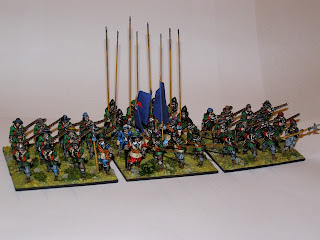 The pikemen are all on one stand now which will make movement so much easier.  I have been struggling with this basing (and not just with adding the base texture around the pikemen's feet when there are 16 of the blighters to work around!). The difficulty comes really when facing the King's units at Naseby and other battles whereby it just doesn't really cut it to declare 'Ah these are small units', when you can see a hefty solid block of 4 rows of pikemen!  I think that with all my Royalist units who survived into the later stages of the 1st Civil War, I will make 2 stands for pikemen with 8 figs in two rows.  This gives me the option to create smaller units to get the right feel, which is after all, something we all strive so hard to obtain.

Anyway, this is the final musket wing: 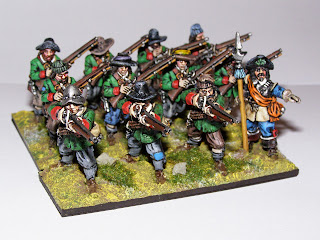 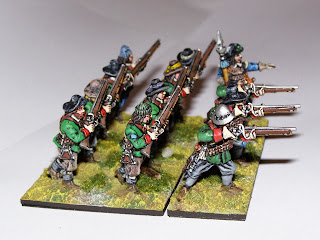 Some close ups of the Musket Captain: 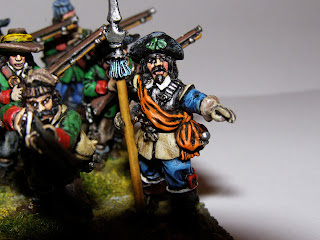 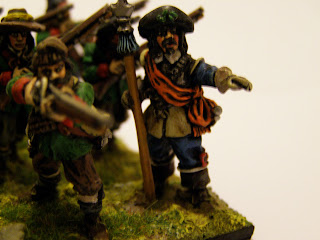 Hmmm ...a bit blurry that one but at least I lost the shadow!  The following two snaps are of the completed pike block. 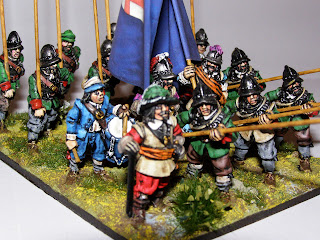 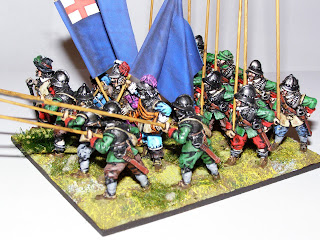 And finally another regimental picture. If this was a modern British Army regimental photo there would be black labrador sat in front of the Colonel! 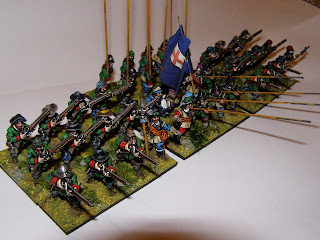 More English Civil War troops to follow. I am determined to do more to re-vamp my old armies. There is a lot more to go but the progress is good so far.  I need a lot of command figures and odd and sods to get my Foundry regiments up to the same 40 figure strengths.  I am still loathe to get Foundry figures to fill the gaps, despite the recent changes at Foundry. They are going to have to win my confidence back!  I'm going to 'Colours' at Newbury this weekend so will see how Perry troops compare to the Foundry stuff in size terms. Hopefully I won't succumb to too much temptation and buy new ranges...we will see!
Posted by Jason at 23:37 5 comments: