Earl of Northampton's Regiment of Horse 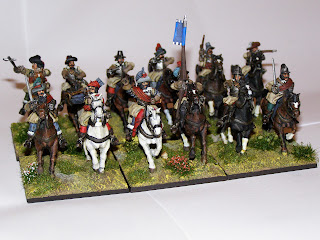 As much as I like painting infantry, there is something quite powerful stirred in the imagination in seeing a completed regiment of model cavalry.  Here is the Royalist Earl of Northampton's Regiment of Horse, finally complete and ready for action.

I must confess that the bulk of the painting work was done some years ago....probably around 1994 if I should make a guess. I have spent the last couple of weeks carrying out the re-basing work and doing some minor touching up work on the figures.  It's quite funny how 18 years ago card bases with green flock sprinkled onto green paint looked quite good and was very acceptable.  Nowadays we all seem to make the bases as pleasing to the eye as the figures, and it does seem to be very worthwhile. 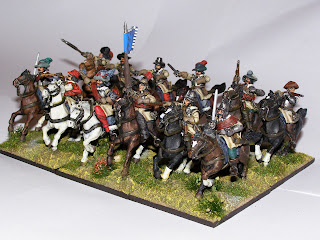 The figures are from Redoubt, and I have to say, back in the early 1990's they really advanced the quality of wargames figures generally with these. The torsos are separate to the legs and heads so you could build up a good choice of different figures.  If I recall, you could also choose either hard heads or 'soft' heads, being helmeted or un-helmeted.

Since my purchase of these figures, my views on whether helmets of soft hats were worn has changed substantially.  I would think that for any man who could afford a buff coat or a back and breast plate, a good helmet was the first thing you would purchase.  The head seems to have been such a major target in most forms of slashing sword combat. Le Marchant's sword cuts in his cavalry training manual in the early 1800's seemed to focus on the head, and in Kendo the head always takes the greater part of thwackings (technical term...not!) as my head would often ring post-Kendo lessons!  I cannot but help think that wearing a soft hat in a cavalry melee would equate to taking an early bath in sports-speak (if you could find your head that is!). 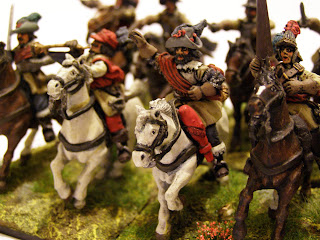 As nice as many of the figures are, some of the Redoubt figures do seem to suffer from 'cymbal-itis'.  The condition of where a figure has clearly gone to a heavy metal concert and fell in front of the drummer just as a   great big hairy bloke slams his cymbals together in a crashing finale.  The head is narrow and squished - demonstrated here by the Guidon bearer (Cornet) in this shot above.  There are a few figures like this unfortunately and is the main reason why I probably wouldn't add to my forces from this company (I have another regiment or so which I bought in the early 90's which are yet to be shown). 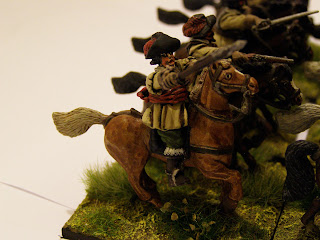 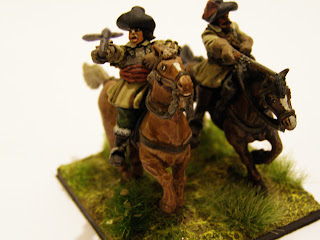 I always liked the pose on this figure (above). A hearty yell and a swing of the pole-axe.  There are a number of good aspects to the Redoubt figures (oh why the squishy heads!). I also like the detail such as lace-work over the top of the boots and also the good number of sashes worn by the cavalry figures.     I do think that the sash/scarf would have been an essential piece of wear in a melee, if you didn't want a wheel-lock pistol from a friendly cavalryman pushed against your back and fired because of mis-identification in the swirling confusion of action. 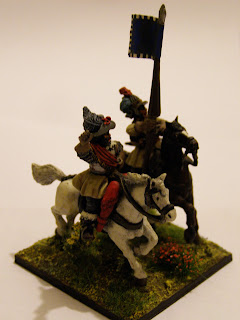 Another shot of just the command stand.  I think I have enough re-vamped forces to have a brigade a side battle of Pike and Shotte tomorrow, just a solo play test effort in readiness for the larger battles to follow.  I can't say just how much I am looking forward to that after spending 5 months or so on these solidly this year already!
Posted by Jason at 17:41 8 comments: 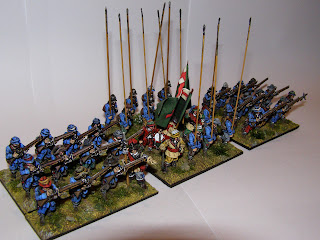 Another very satisfying moment when I can announce the completion of another 40-strong regiment.  I completed the musketeers a few weeks ago, but I needed more pikemen which I picked up from Colours at Newbury in September.  During the wait for that show I managed to bring some other units up to strength. 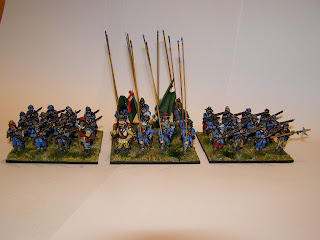 The figures are all Bicorne Miniatures from their 28mm range. Flags are by GMB. Bases are MDF and the texturing on the bases are a mixture of all sorts including twigs and cat litter rocks (which I am running short of now after all these years, I may need to buy another bag just for the miniatures to use!).

I think my discovery of the year has been the flora by MiniNatur. This stuff is just wonderful and the small shrubs and flowers add such detail to a figure base.  I wish I could remember which blogger I first spotted using this and I had to ask the question as to whom it was made by. The model was an ACW signalling tower if I recall and it was amazing, and with such great plant-life beneath the tower. 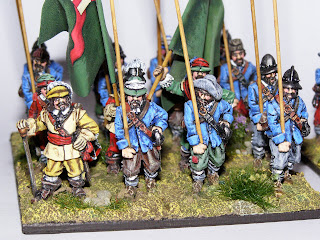 I have focussed on the musketeers of this regiment before, so here is the pike block.  The poses of these pikemen are some of my favourite.  They look like they are marching with a 16 foot long piece of ashwood rather than a helium stick!  They have the air of a unit on campaign.  Armour is minimised to just a helmet for the men.  Tassets (if ever issued), would have been 'lost' on the first march.  The first full summer of marching and counter marching around the Thames Valley, midlands, west, south and back to the Thames Valley might have resulted in the back and breast plates going the same way. 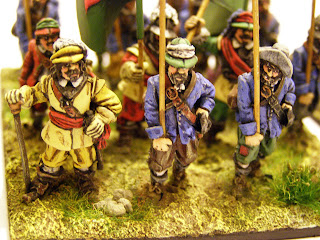 A close up (or making 28mm figures look like 12" 'Action Man' figures! Do I really want to expose my painting to that much scrutiny!) :-)  Unfortunately the flash has given the blue coats a purple hue, but I hope this doesn't spoil the overall detail effect. 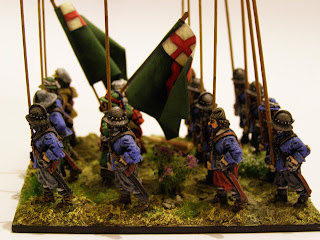 A side view of the pike block.  Moving these guys as one stand instead of several should speed up the game time considerably. 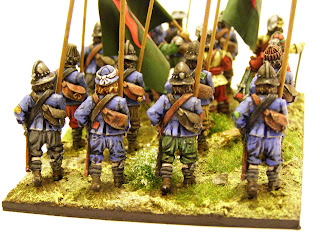 A view of the unit from the rear.  I really do like the little details these figures have, like the patches on their clothing and also the leather packs, which must have been carried on campaign.  I just can't imagine any soldier wanting to keep his plunder on the baggage cart! 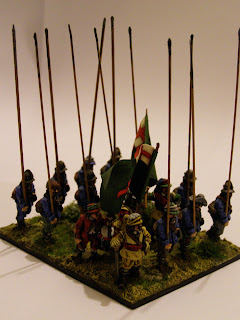 By strange co-incidence, when I was painting this regiment I discovered that the regimental commander, Sir William Pennyman was actually buried no further than 300 yards away from where I work!  Having an office with a balcony which looks at the King's old Headquarters of Christchurch College and Cathedral  really does inspire me to paint and delve deeper into this fascinating period of history more and more.
Posted by Jason at 00:32 8 comments:

Another one done!  The final musket wing now completes this unit. It's all fully manned, and newly based and ready for action. 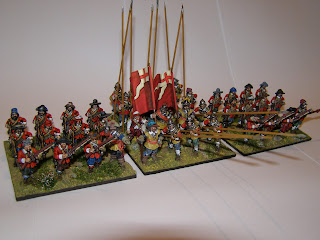 This regiment presented somewhat of a dilemma as to whether to represent the buff coats which Trained Bands troops are often portrayed.  The jackets on these musketeers are really too short to paint buff in the hope that I could get away with representing sleeveless buff coats.  In the end I settled with some pikemen in sleeveless buff coats but musketeers without.  Another dilemma was whether to have the trained bandsmen in civilian jackets or red ones - different modern authors seem split on this one.  I decided to go for an issue of uniform coloured jackets, but kept personal touches of different coloured ribbon ties on breeches to show some independent spirit on the part of the regiment's volunteer members.  The 'Red' of Red Regiment relates only to the colours carried, the same as the 'Blew Regiment' carried blue ones. (This regiment will follow at a later date!). 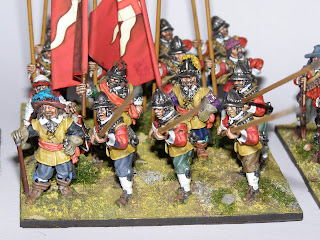 I can't claim credit this time for painting the whole regiment.  My wargaming friend Ian painted much of this unit several years ago.  I rescued it from joining a Bring and Buy stand at a show and have since re-based them all.  The musketeers shown below are the ones I have been painting in the last few weeks to bring the unit up to strength.  Buying a nicely painted unit can be a double-edged sword of course if you wish to add more figures, as you have to try to colour match (within reason) and not make your own figures too different in style. 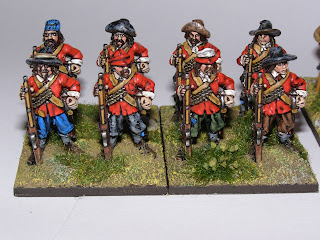 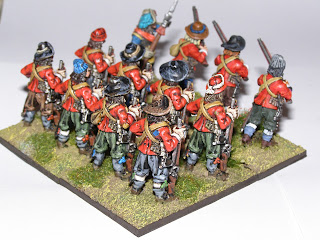 The figures are again the superb Bicorne figures from their English Civil War range and are an absolute joy to paint.

Here are a couple of close-ups: 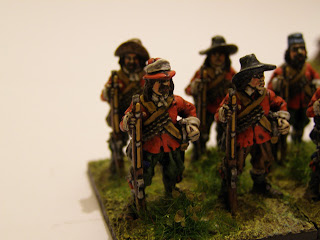 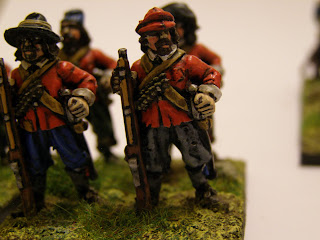 Well, that's the figure progress of the last few weeks.

I'm going to go off at a slight tangent here and mention that I found an unforeseen problem as I sat down to playtest my new Pike and Shotte rules with these large units of mine...the board is too darned small!  My board is 8ft x 4ft.  This always seemed massive when rules always allowed movement of between 3" to 6"...but these days rules allow lots of big movements it seems (and no bad thing either, nothing worse than an action that took an hour in real time taking 2 days to play!).  I could scale movements down of course but even the starting positions just look too close.  No room for manoeuvre just a head on clash!

So....I'm designing a take-down table which can break into sections and go behind the sofa when I'm not playing.  When assembled it is 12ft x 6ft...much more satisfactory!  I'm divided between buying teddy bear fur and making a super home-made terrain set (and risk making a mess of it!) or whether to buy something ready made from someone like this: http://terrainmat.com/
Has anyone any experience of this firm or similar?  Your advice would be much appreciated.:-)
Posted by Jason at 21:56 4 comments: