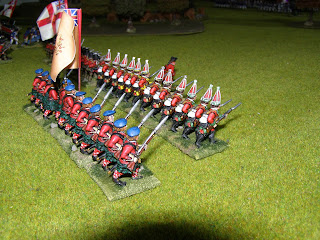 On 8th June, Ian and myself decided to try out using Black Powder for our French and Indian Wars games. We last played Seven Years War/French and Indian Wars using 'Age of Reason', a perfectly good set of rules which gave an enjoyable game.  As it has been some years (probably close to 10 years) since we last opened 'Age of Reason' we decided to use rules we have become more familiar with.  It was another outing for the excellent Black Powder rules.

Because my French and Indian wars units are based as 12 man units (or 16 in some cases) for Age of Reason, we kept these units as 'standard units'.  This didn't affect game play at all in an adverse way and worked well.  You quickly forget that these units are half the size or so one would normally use for Black Powder. 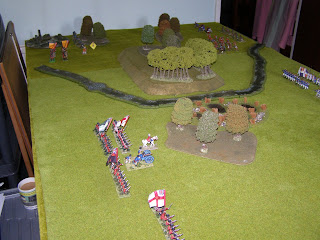 I went British in this game and Ian was in charge of the French and Indians.  You may notice that we did have some assistance from some Continentals from the American Revolutionary War for command figures, artillery and additional militia troops.  These again seemed to blend in well, once the game was underway. We used 50% Black Powder distances and used the Angus Konstam modified play sequence: http://www.edinburghwargames.com/  Initiative, Fire, Command and Move and Melee.

Terrain rules: Swamp was classed as impassable to all except skirmishers. Woods also used the Konstam rules as per his website.  River was impassable to guns except at the ford, but infantry could cross but at 3" move deduction.

All commanders including Montcalm and Wolfe were '8' good, except for the French commander in charge of the 'light brigade' of Woodland Indians and Coureur de Bois who was rated 7 to reflect the difficulty of giving orders to independent minded fellows.  Woodland Indians were classed as 'Bloodthirsty/Skirmishers/Marauders'.  Most British units had 'First Fire'. Louisberg Grenadiers were also 'Crack and Steady'. 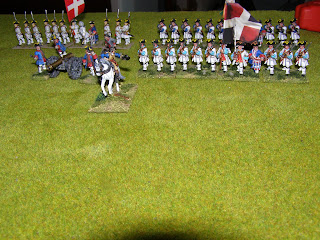 I have to say it was a complete joy to see these troops back on the table after being boxed in the attic for the best part of a decade.  I know some people have a rule of selling off what they don't play with in a year or so, but for me I know that I tend to go in circles and I am always so pleased to re-discover the joy of great looking figures which have not been aired for so long.  However, shame on me for keeping these guys hidden away in the dark for as long as this. 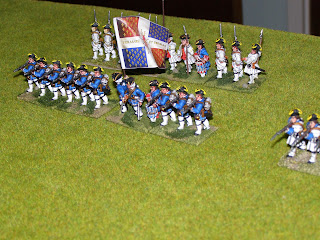 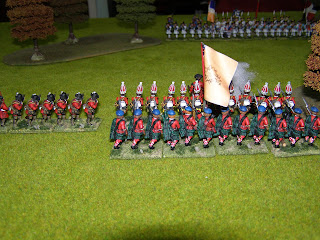 Louisberg Grenadiers ahead of the 78th Highlanders

Game Turn one saw both sides advancing towards each other.  The French having the better of the turn. The French Artillery successfully hitting and disordering the Louisberg Grenadiers.  This could have been due to Ian having brought his secret weapon with him....his lucky dice! 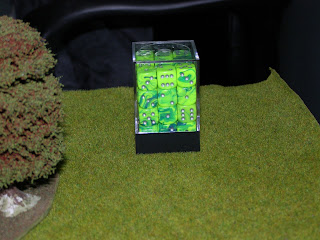 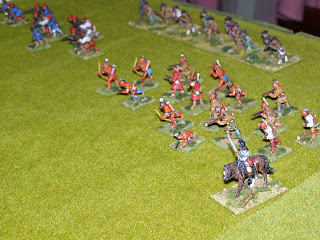 Game Turn 2 brought a lot more action. The British continued their general advance and the French countered with fire and a bayonet charge.  Rogers Rangers recoiled in retreat and disorder.

Game Turn 3 brought even worse news for the British.  In a large melee, the elite British Brigade, commanded by Wolfe in person, containing the Louisberg Grenadiers, the 78th Highlanders, the 47th of Foot and the 80th Light, was broken.  The whole brigade fled, taking Wolfe with them.  The British were now in a dire situation as the right wing collapsed. 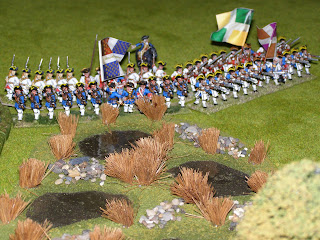 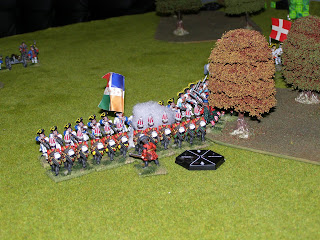 The Louisberg Grenadiers and Wolfe under serious pressure 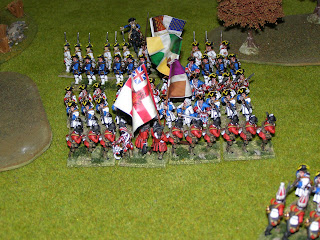 Game Turn Four saw the British break a unit of Coureur de Bois with solid musketry but a charge on the Royale Rousillon by the 43rd Line was held by the French.  The French replied by consolidating their positions and mutual reinforcing. Things were going to get desperate! 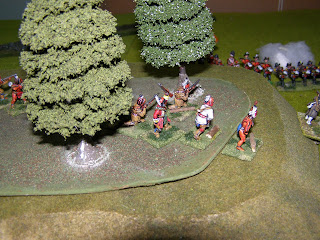 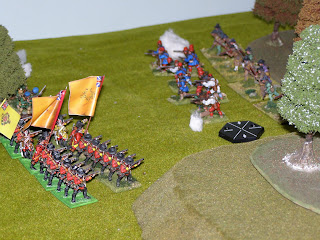 The extreme British left. This became a hotbed of musketry which the French eventually got the worst of - but they held while they won on the Right 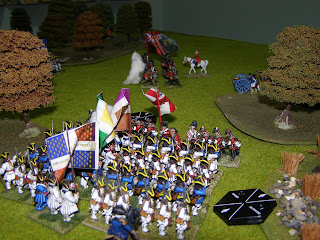 A last ditch shoring action by the British in the Centre

Game Turn Five saw the tide fully turn against the British. The British tried to charge against overwhelming odds in the centre but lost the melee by one point.  The French continued to move their now greater numbers to consolidate their strength.

At this point it was declared all over. We had run out of time and also it became apparent that the British (i.e. me!) was not going to be able to reverse the situation.  The British were doing well on their left against the light French troops but had taken too long to make gains against them.  The British right had folded with their elite brigade and army commander fleeing.  This left the French to put superior numbers of troops to squeeze the British centre.

All in all we decided that Black Powder had again given us a superb game.  There was no 'fireworks display' of units as we kept trying to keep linear cohesion to prevent gaps from appearing.  This gave a good feel for the period.  The inclusion of different troop types such as Woodland Indians and Rogers Rangers really added to it and it was really enjoyable to play and just simply to stop occasionally and admire the troops on the board.

At times like these you realise what a great hobby we have. :-)
Posted by Jason at 21:55 8 comments: