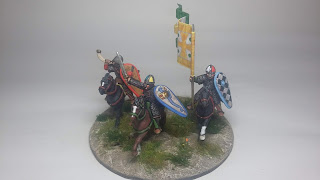 Count Eustace seems to have been a colourful character, having been excommunicated by the Pope, being involved in rebellions and getting involved 'in a brawl' with the citizens of Dover which caused a rift between King Edward and Lord Harold Godwinson (if my easy research from Wiki is accurate!) 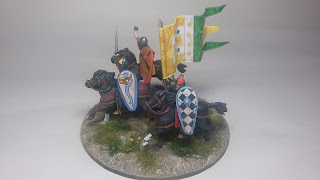 Wiki also claims that Eustace might have been the patron of the Bayeux tapestry, and then goes on to claim that Eustace is shown pointing in retreat on it. I'm not convinced that a patron of the tapestry would have himself immortalised telling the chief that the army should skedaddle!

William of Poitiers who chronicled the Norman conquest did write the following about Eustace though (which also shows that one doesn't turn one's back on a line of angry Anglo-Saxon's!).

'With a harsh voice he (Duke William) called to Eustace of Boulogne, who with 50 knights was turning in flight and was about to give the signal for retreat. This man came up to the Duke and said in his ear that he ought to retire since he would court death if he went forward. But at the very moment when he uttered the words Eustace was struck between the shoulders with such force that blood gushed out from his mouth and nose and half dead he only made his escape with the aid of his followers.' 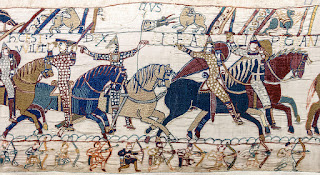 To me it appears that the tapestry shows that Eustace is drawing attention to William who has raised his visor.

My figure of Eustace has one of his entourage doing the actual carrying of the Papal Banner. 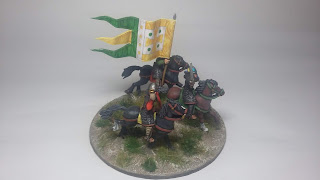 The figures are from Gripping Beast and the banners from Flags of War. Shield transfers are from Little Big Men Studios (if I recall correctly). 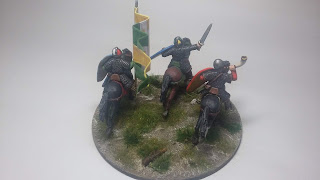 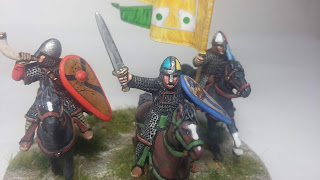 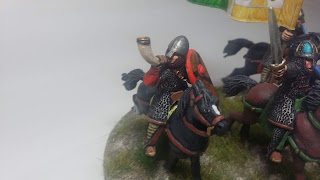 I do enjoy painting Normans - a good covering of chain mail makes painting a simpler task than many troop types! 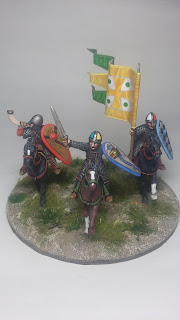 Well, I am away working again this week and I have taken plastic 28mm Normans and Saxons with me to build - hopefully I will get to paint some more up too. It's nice to take uncomplicated things away to do in my time off in the evenings.  So hopefully more to follow soon!
Posted by Jason at 01:32 16 comments: