This is the record of a game played on 7th April which I have only just got round to downloading the photos for (shame on me!).  It was a game of Ancient Britons versus Imperial Romans with Ian taking charge of the Romans and me all woaded up in charge of the hairy ones.

Rules used were 'Hail Caesar', a set which I have had for a few months and just have not been able to put down.  My previous blog posts probably give a good indication of how much they have inspired me!

The board was not too cluttered with scenery.  It's still early days as far as playing goes.  This is the third game played with the rules and i'm still making mistakes but only one or two now. 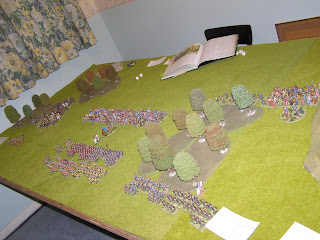 Turn One
Please excuse the slightly odd angle - I was trying to get as much of the board in shot as I could.  This shot was taken just after the advance of the Ancient Britons.  I threw to go first and decided to go for it in the proper Celtic manner....charrrrrrge!!!!  I also wanted those charge bonuses and to seize the initiative early on.  For ease of reference I shall refer to North, Centre and South of the battlefield.  North is the window end where the delightful floral curtains hang.  Both forces were arranged in three divisions each.  The Roman's having a particularly strong centre of 4 Legionary Cohorts and a unit of Scorpions. 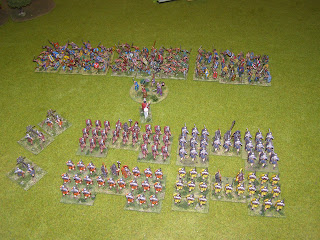 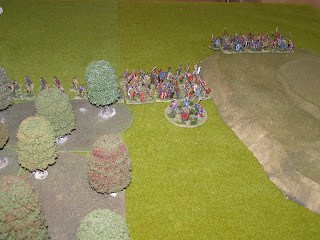 A view of the Ancient British advance on the Southern flank.  This advance was hampered by orders problems and as a result advanced too slowly. 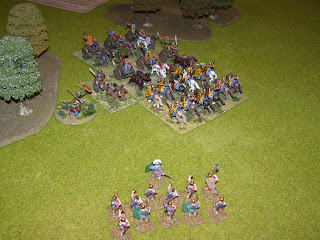 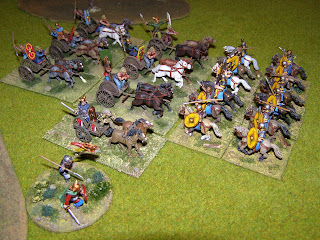 I sent my two chariot units hurtling in on the Northern flank.  Ian countered with one unit of auxiliary cavalry. The battle here was fast and furious and very bloody.  The result was that the auxiliaries and the front unit of chariots broke each other. 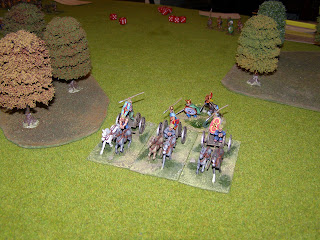 The remaining British force on the Northern flank.  Only one unit of Roman Auxiliary Archers deployed in skirmish order stood between them and the Legionaries exposed flanks in the centre of the field. 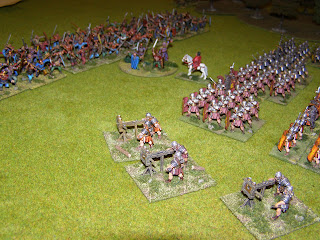 The centre prepares for the coming clash! 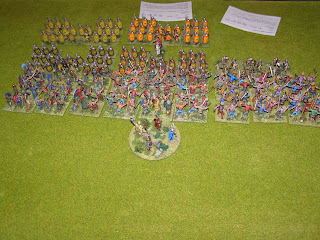 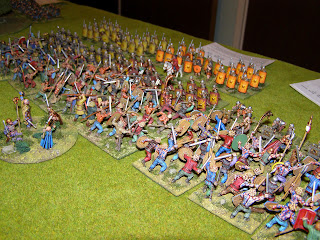 The Army commanders throw their weight into the combats on both sides too.  The outcome of this attack would have such a bearing on the whole battle.  History says that attacking Roman Legion in this fashion was usually suicidal.  However, when you have a big force of warband who are facing the Legion, you just don't want to sit back and wait for the Romans to come marching on.  The temptation to just go for it and break that shield wall is just too great.... 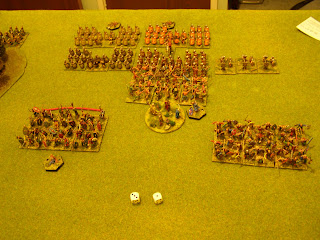 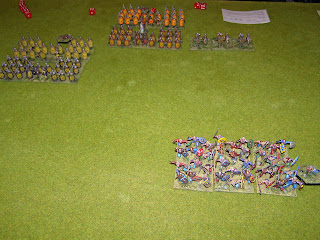 Though as Wellington was later to say...they came on in the same old way and they were beaten in the same old way...and that's just what happened to my Britons!  The scorpions beat off one unit with accurate and very deadly fire causing a break test prior to the point of impact.  The very central unit was broken and my Army commander wounded.  My left unit of the central division was defeated and was then contacted in the rear by a sweeping advance by the Romans.  This broke that British unit too.  The only upside in the whole of the central combat was that the Roman Army commander was wounded also.

Turn Four
The Britons need to turn the battle around here and fast!  With the centre broken they had to win on both flanks to have any hope of winning the battle, and to do it before they became engaged with the bloodied and victorious Legionaries. 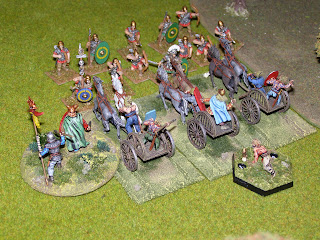 On the Northern flank a charge by my chariots was finally made despite poor order throws.  This tardy attack made contact with the Roman skirmishers.  Breaking through should have been easy.  But NO!  The Roman's had some amazing dice luck and held, forcing the combat to continue into the next round. 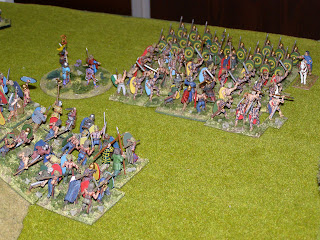 On the Southern flank my division of Britons finally got moving properly and charged the Roman Infantry Auxiliaries.  This attack was looking much better.

Turn Five
On the Southern flank my successful British division manage to break the Roman Auxiliaries, killing the Roman divisional commander. Now if I can just repeat the success on the Northern flank, I can pull victory out of defeat....But no, the skirmishers hold for another round of combat and keep my chariots hemmed in... 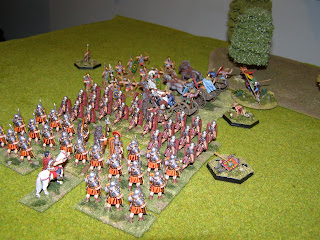 Ian moves his victorious Legion into the exposed flanks of the chariot unit.  It's all over. The chariots are reduced to mangled wooden wreckage and bodies.  My successes on the South flank at least save face for the Ancient Britons, and they flee the vengeful Roman Army to fight again another day.  There is no escape from the scale of defeat though.  Ian won a good victory, though it was only really certain in his move in Turn Five.

I think this is the third time Ian has won out of the three times we have played Hail Caesar...I still enjoy it though. The battles have all been hard fought and great fun with lots of laughing at some of those good and bad throws at just the critical moments.  (Hang on, I've been beaten three times out of three games...it's Franco-Prussian War next time and I've got the spikey helmet on!).  Actually I will get back to other periods sometime, but this one really has me hooked at the minute. We will have to see what is going to come off my painting table next! 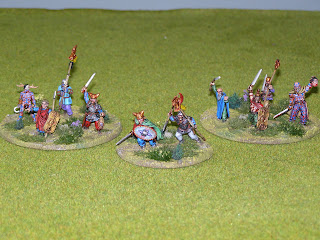 After my recent posts of the warriors, this time I bring you the commanders!

It's taken me a little while to get these stands done, but I wasn't sure what I wanted to achieve with the basing initially, and I wanted to try out new things to make them more interesting.  Instead of my traditional single stand figures for commanders I wanted to go for a stand to show the main man (or woman) himself plus the interesting characters who the Chief would have surrounded themselves with.

I decided to use a steel circular base to avoid warping and build up basetex-type material so the stand could actually be picked up.  The steel base was 1mm which seemed a good idea before I saw them but picking it up off the board was hard work!  I built up the edges and gave them several layers of acrylic paint to stop the  newly build-up base-tex edges from eroding with handling.

So without further ado...more pictures... 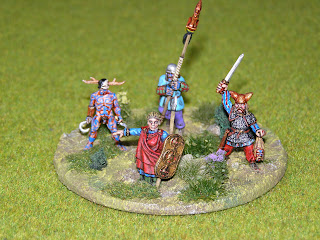 The command stand of Queen Cartimandua of the Brigantes tribe.  I actually painted Cartimandua about 12 years ago using enamels.  As I had to paint her new subordinates I decided to give her the acrylic paint treatment too and give her a bit more life.  The old enamel paint did look very tired on her. It could be said that it may have been more realistic, a little more faded fabric perhaps would have been the correct look, but she is a Queen after all, so nice deep powerful colours were added with acrylic and I think she looks more regal for it. 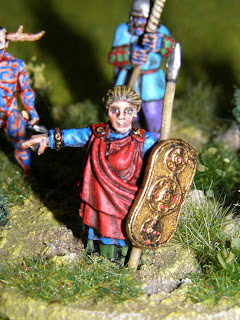 Now this next figure could be Vellocatus, who she divorced Venutius for (and devastatingly split the tribe).  I originally planned to have the big chap on Caractacus's stand holding a Roman head, as her fellow.  But as I was painting them up it suddenly occurred to me that as she allied her tribe with the Roman's, why would her new man be holding a Roman head!!!  A change of husband's was required (again!) and so I gave her another  British Chieftain to be Vellocatus and gave him an Ancient Brition's head to hold, more indicative of the inter-tribal wars the Brigantes found themselves embroiled in. 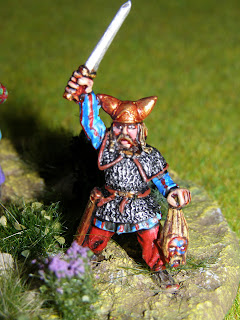 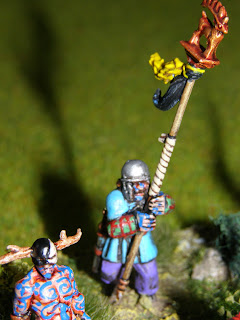 ...And this wild fellow below who looks like a particularly dangerous member of Cartimandua's hierarchy.  A Druid who appears he could put the frighteners on any tribal member! 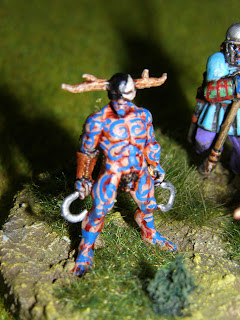 Using the Hail Caeser rules I will use these larger bases as Army Commander stands.  I will use smaller two man stands as my standard Divisional/Tribal Leader Commanders. 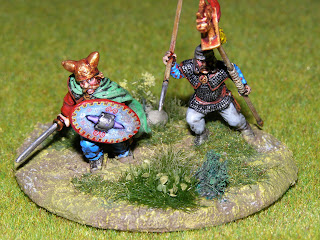 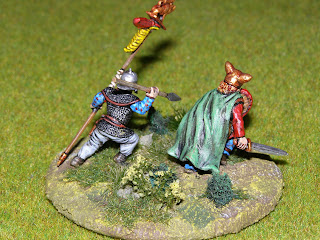 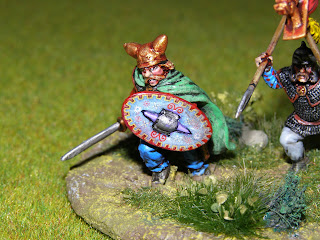 I also painted up the stand for Caractacus.  Needless to say I had to keep him away from Cartimandua seeing as she chained him up and handed him over to the Romans when he sought her help when his rebellion failed! The figures on this stand are a mix of Wargames Foundry and Warlord Games. 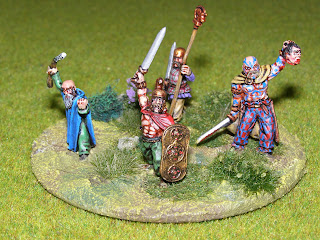 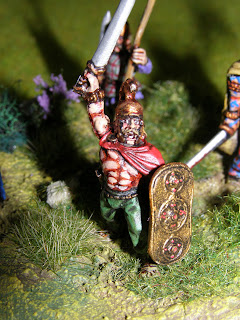 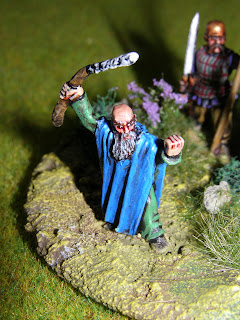 The large chieftain holding the Roman head is in scale.  He is just meant to be a very big bloke! 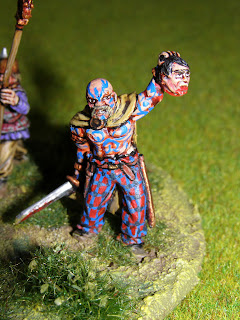 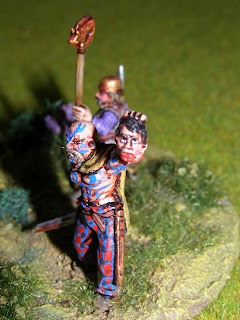 The standard bearer and a shot from the rear of the stand. 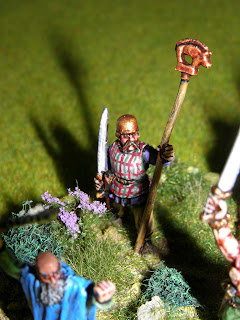 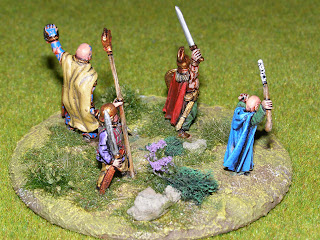 As you can probably tell, I really enjoyed painting these figures.  I also enjoyed spending more time with the basing too.  It's not just the painting. As I'm sure you find, the more you paint the more research you do and the more enjoyable the hobby is as a whole.  It's through painting Ancient British wargames figures that I found that I live right near the border between one tribe who allied itself to Rome (Dobunni) and one who fought against it (Catuvellauni)  I must cycle through that troubled border land each time I go to work every day.  It sets the imagination going somewhat to think of what must have been happening in that very area all those years ago.
Posted by Jason at 17:55 2 comments: