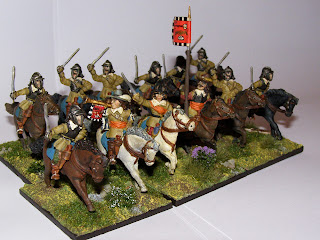 More cavalry! This time they go back even further in my painting history.  I painted this regiment way back, probably around 1991.  These were my early days of painting wargames figures (forgetting the splashing of Airfix figures with glossy Airfix G5 dark green when I was about 8 (I think this was the colour everyone used if bring and buy stands at shows are anything to go by!).

These are not painted to the standard that I aspire to now. Experience counts! But I do still like them for their shadeless honesty.  It gives something of the toy soldier look to them.  I also like to view them and compare them to the progress I have made since those days of the early 90's. 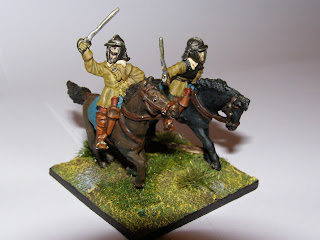 What I have done in the last couple of weeks is to re-base them.  Gone are the individual bent pieces of card with flock (worn off!) and now they are on MDF with basing done to my current methods.  I very nearly retired these figures, but they still have that something about them and they fit in size-wise not too badly with the Bicorne/Renegade/Redoubt troops.  Actually these figures are still on their card bases but you cannot see them.  I glued those bases to the MDF before adding the texture. This increased the height of the figure by about 1 - 2mm so making them fit in so much better. 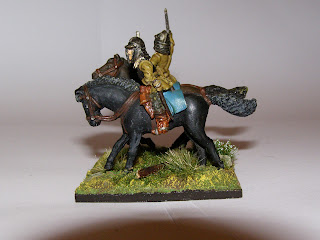 The manufacturer used the method of casting the figure to the saddles. This gives an unfortunate 'camel rider' look to them as the cast saddle cloths are thick metal.  As an aside I have just remembered that these old figures were once displayed on the very large meeting room in the Headquarters of the Prince of Wales's Division.  The meeting room table was massive and I had enough of trying to wargame on my barrack room floor...so....I found the perfect place! The Headquarters table. I had access to it for one night only but it raised the interest from some very senior officers (pity most of my figures were Minifigs then but hey-ho!) 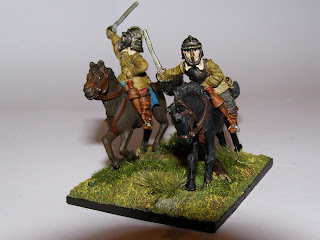 Anyway, these figures are no longer produced and haven't been offered in the manufacturer's catalogue for some time now.  Can anyone guess who they were made by?  I will let you know if no-one guesses correctly!
Posted by Jason at 00:54 5 comments:

More thunderous sounds of hooves as from across the battlefield another regiment is re-vamped and re-based ready to join the action once more...(dramatic stuff!) 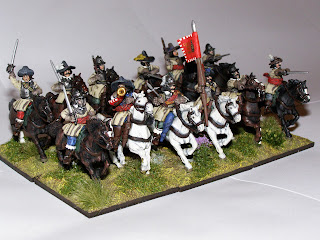 This is another regiment which I painted originally way back in 1995 or thereabouts.  Again, these had card bases with some awful green scatter stuff on as basing material.  I seem to remember that these were painted at a time that I deemed it necessary to try to speed up my painting, to try and get as many playable units on the board so I could get on with playing the big battles.  Thankfully these days, I accept that it's going to take a good few years before I'm ready for Marston Moor but in my more mature years, I'll not be rushed into doing half-baked paint jobs.  The pleasure now is to see figures painted to as high a quality as I can get them within reason...I'm not after prizes and life is too short to go completely OCD over them. 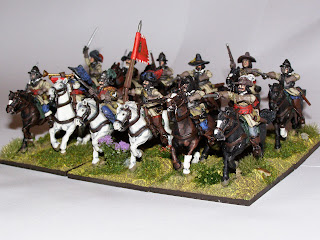 These chaps are of those earlier days when I used a black undercoat and then brown on the coats and attempted some kind of dry-brush exercise to build up the lighter colours.  I don't think it worked too well and so spent some time, as I was re-basing these, putting on a lighter touch of buff to give some 'life' into the painting.  I would originally have used enamels to have painted these, and it's noticeable that my enamel painted figures have a dull hue about them.  The next pic is a 'before and after' (Mr Broad-brimmed hat is after and Mr Helmet is before): 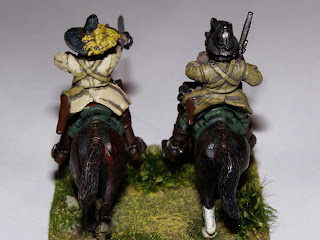 I accept that on campaign the darker shade might be more realistic,but rather like British Redcoats on the night of Waterloo, do I want tatty soldiers with a campaign look of white cross-belts dyed red from rain sodden wool or do I want decent looking figures on the board.  I opted more for the latter, with fresher colours breathing some life back into tired dull figures.  I did keep the original shade on gloves and cross-belts just to add contrast. 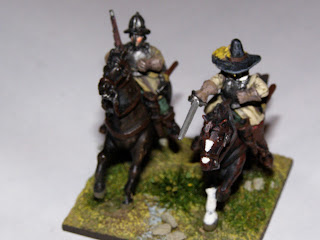 The figures are my second and last unit of Redoubt cavalry.  I probably won't add more from this company, but never say never :-)  They have their plus points and I remember that I loved building them.  Some of the poses are the equal (or better) than some of those produced by more recent offerings from other companies.  I thought the horse castings were pretty good too, with good animation and good proportioning. 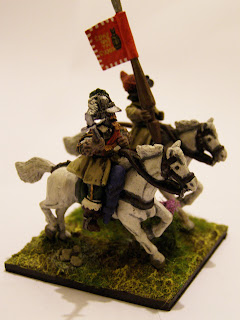 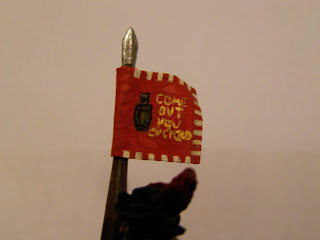