Following the Franco-Prussian game using 'They Died For Glory' rules, I decided to play another battle but this time using 'Black Powder'.  My board is only 8 feet x 4 feet so some rule amendments were used.  The rules were re-scaled to 50 Percent of the Black Powder distances for all movement and firing. 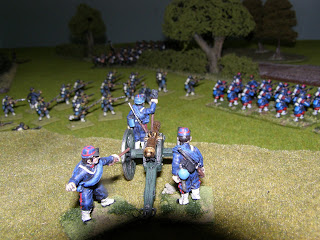 French Artillery giving the distant Prussian Column a taste of it

Creating roster sheet stats for the Franco-Prussian War units was quite an enjoyable task. Given what is known about the differences in range between the Chassepot vs Dreyse rifles and also the superiority of the Krupps breech-loading artillery vs the French muzzle-loading guns and their restrictive shell fuse settings.  This was really interesting and involved a good deal of research and plain old 'what felt right' gut feelings.

It's the differences built into the stats which help to make Black Powder sets such a great system.  The way that some units can be elite, sharpshooter, reliable, steady etc etc to show their strengths.  Equally the little adjustments in morale or stamina ratings can demonstrate the hard-as-nails Turcos strengths in hand combat vs Prussian Infantry.  This was actually the first game of Black Powder I had played.  I took the unusual route of learning on 'Hail Caeser' first, then 'Pike and Shotte' before finally getting round to Black Powder.  My apprenticeships with the other rules really helped in making playing Black Powder very easy.

I have a confession here...when Black Powder came out I was really wasn't in favour of using it.  I thought that a rule system which covered such a wide area of history was ridiculous as a concept and couldn't possibly give a game that felt accurate in any period, being so general.   On my first reading of the rules I realised that I was wrong.  My regular opponent Ian lent me his copy to gen up before future prospective games and it was a while before I was motivated enough to properly read them.  I understood then about the concept of it being a tool-kit and that it's the little tweaks made to the rules to make them suit the period that make the difference.  I can now understand why those who play the rules rate them so highly. 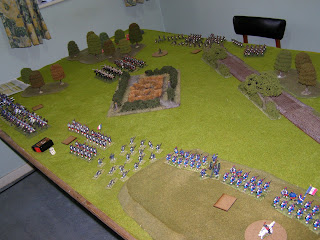 A view from behind the French lines

Anyway, the game itself was between 4 brigades for each side. One of cavalry and three of Infantry each.  The Prussians were to have their final brigade to arrive on an escalating chance on a D6 each game turn.  All Prussian units were to start off board to cause the French Commander (Ian) the same disadvantages as the French frequently had due to poor cavalry scouting.  The Prussians could therefore pile in where they saw fit.

The French command rating was 7 instead of the usual average of 8.  This would make order giving so more difficult.  Command effectiveness was realistically curbed by using such a simple rule.The Chassepot range was made 20" and the Dreyse 15".  Not such a big difference as may be expected.  Historically French fire discipline was noted as poor and Prussian marksmanship was quite good.  Target shooters have noted that the Dreyse is comparable in accuracy to the Chassepot at it's effective ranges.  I gave the French more reach to reflect the greater range but if the Prussians could get close enough then things would even out. 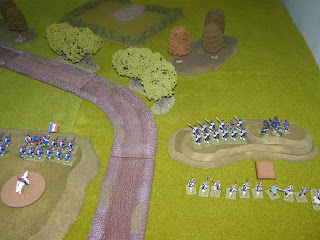 The game itself used my Foundry collection.  Please excuse the plain bits of MDF that you see.  These are the brigade commander representations.  Foundry did a great range of FPW figures, but they stopped short at making more than one mounted officer (now discontinued from the range!).  There is a command pack which I am going to have to purchase and then do various mix and matches/conversions etc.  I can see the Perry's ACW cavalry being chopped up and 'Green Stuff'd' to make more commanders.  The Prussian Army is also lacking a decent commander range.  It would be great if Foundry were to fill in the gaps in what is a superb range.

We used the changed play sequence favoured by Angus Konstam and available on his website http://www.edinburghwargames.com/  The new sequence is, initiative moves, shooting, movement, melee.  This overcomes the biggest flaw in BP rules which was to allow the possibility of a unit to rush 3 moves and then fire into the faces at point blank of it's waiting foe.  This change means that troops can also now fire a darned good volley and bayonet charge out of the smoke in the way favoured by a certain British Duke! 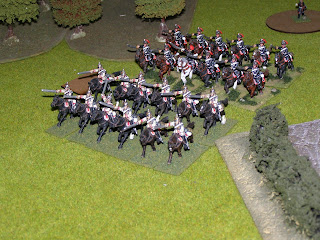 A two unit brigade of Prussian Cavalry galloping forth!

The French threw and moved first.  Ian moved some units forward on his right flank and awaited developments to see where the weight of the Prussians deployed. Orders to the French infantry failed to be communicated due to the difficult command rating.  I made a two pronged attack, Prussian cavalry advanced in the centre, with an infantry brigade behind and also a Bavarian led Brigade advancing on my extreme left towards the French on the lower hill. 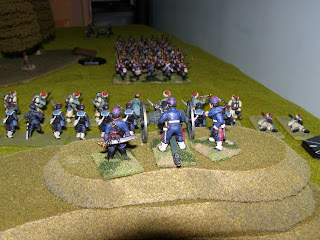 Prussians and Bavarians prepare to assault the low hill. The Turcos come forward to meet them and the Mitralleuse begins it's deadly music....until it jams!

The second game turn saw my Bavarians and Prussians start to threaten the French on the hill. My cavalry moved into a charging position in the centre.  Ian responds with fire.

Game turn three saw the  French put more fire down on my Prussians.  My attack on the left gets quite a chewing from the Mitralleuse until it jams.  The Prussian cavalry charge and are counter-charged in turn by the French. A good cavalry scrap results.  I order my central infantry to move forward with all haste, now that the French cavalry are distracted they can advance quickly in columns and close....alas! A double-six on the order dice...an orders blunder!  I can only hope that I get something harmless...again I throw the worst possible and the result is a retreat!  Unfortunately this takes the entire brigade off the table and so things are suddenly looking bad for the Prussians! 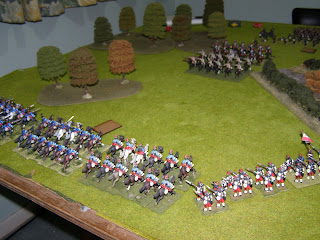 The cavalry battle also goes against the Prussians. I took fire as the cavalry charged and the bigger French brigade defeats my own own.  This turn has gone badly.  Luckily my cavalry remain in the melee but my Kurrassiers are shaken.

Game turn 4 sees my reinforcing brigade arrive...hurrah! But....my cavalry break and flee!  It's all over, two brigades out of 4 being broken means my army is broken.  Von Moltke and Von Bismarck will not be handing out tea and medals. 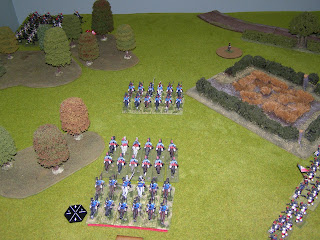 In conclusion, how did it go?  Well, as commander of the Prussian army, the result was not a success. The game however was fun and gave a good feel and it was only bad luck and really crap (I mean really really crap) dice throwing that let things down badly for me.  Ian felt it went well and that the rules gave a more enjoyable game for the French.  His orders to his troops were harder to get them to respond to, but Black Powder did allow some freedom for them to move.

From an army creation/stats designing point of view the rules were terrific with most of the tweaks appearing to be in the right direction. The rifle distances seemed to play well and the strengths and weaknesses of units and commanders seemed just right. The Prussian artillery advantage never really made its case....an obvious reason being that I had at that time only one Krupp gun!  So the French never really suffered in a realistic way. (I now have another Krupp gun ready to deploy!).  The biggest change of all to the rules will be on units leaving the board due to blunders.  With a 4 foot wide board this essentially ends the game if a blunder is rolled.  The change to the rules is now that the unit is off-board for D6 turns and not permanently.  If a 5 or 6 is thrown then it could still be a game changer of course - a lot seems to happen in few turns in Black Powder, but it's no longer guaranteed fatal.

I think Black Powder is going to be the rule set of choice for my Franco-Prussian games from now on.  I was so inspired that I have started a big re-vamp of my armies.  Re-basing on MDF instead of bendy thin plasticard and card. 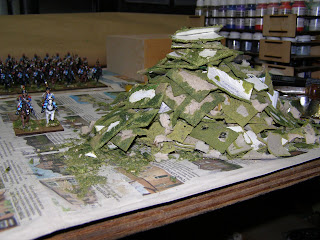 The mountain old bases shows serious re-basing is in progress!

Re-painting is underway, replacing the yellowing old enamel paint with fresher acrylic colours too.  I have also changed the scale from 1:50 to 1:40.  This means my French units instead of being 12 men strong will be 16. A small difference but it looks so much better on the table.  GMB are also doing Franco-Prussian flags now and the ones I received in the post today are fabulous. 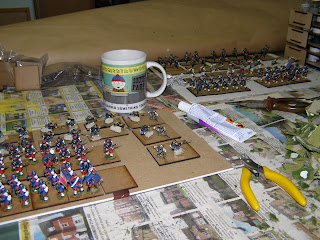 My board doubles as an 8 foot long painting area! 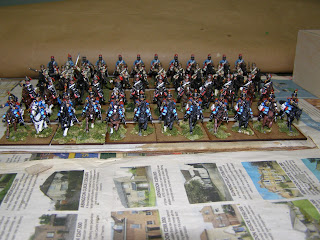 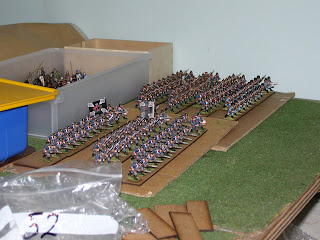 Inspiration has struck again and another massive re-vamp begins.