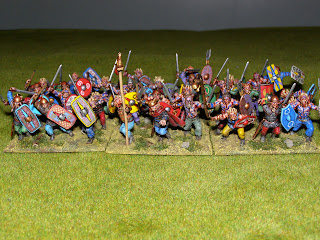 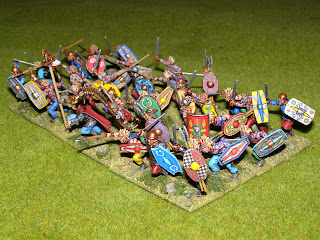 This is what I have been doing since my last posting just over a month ago.  These are the Ancient British Warriors by Warlord Games.

I love the colour and sheer spectacle presented by a box of these chaps.  There is a feeling of forward momentum and lots of energy.  No tidy ranks with ramrod spines and wooden poses - these guys are really going for it and their faces and bodies really demonstrate it. 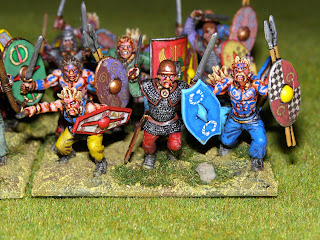 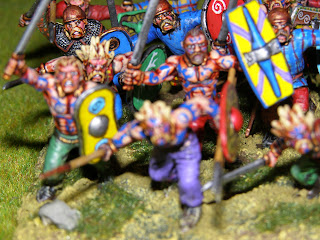 The leading fellow in the photo above is clearly moving too fast to be more than a blur (nothing to do with dodgy camera work at all!).  I nearly didn't use this pic but I like the way the figures behind are brought into focus.  The difference between the 'Celt Warriors' and 'Ancient British Warriors' pack is 10 extra figures in the latter, and a pack of metal heads with the limewashed spikey hair mostly and metal command figures as well as round shields, which must be rarely seen on Ancient British wargaming figures.  Indeed, it felt a bit strange putting them on the figures so I kept the rounds shields minimal.  There seemed to be many more shields in the latter pack than the Celt pack (which I remember was very disappointing in their lack of numbers).  I prefer to see all my troops properly equipped and armed rather than looking like they have discarded their shields due to having been 'pilum-ed'!

I have always had an aversion to painting tartan. Highlanders' kilts cause me much grief. Those straight lines and patterns I have always struggled with.  I was determined to make more effort with these chaps as it seems that tartan patterns are such a represented part of their whole make-up.  The overall effect turned out to be quite pleasing to me, but I still wouldn't want to do it too often! 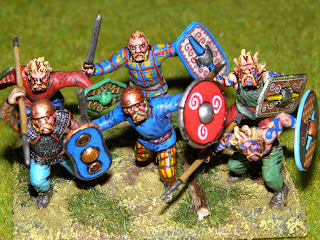 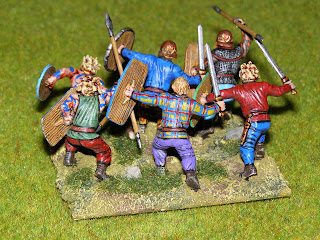 The blue woad body painting is always fun to paint.  Sometimes I find myself not wanting to put the paint on, especially when the skin tones have worked out particularly well. In the cases where clothing was off, I decided that the bodies had to be decorated, again to build up their sense of character. 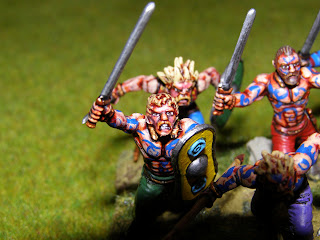 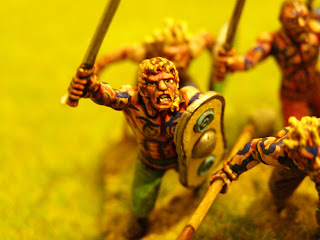 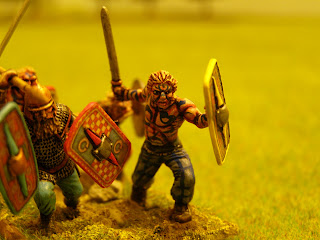 I hope these close ups demonstrate what I mean about the sense of character.  As you can probably tell by the number of photos I have put up, I really enjoyed painting these figures.  I can't wait to see them on the board added to the developing horde that are my Ancient British Tribes.  Playing them with 'Hail Caesar' rules is great because you have to use them in four ranks and the force just feels right. When a unit has supports either side and behind it just looks great to see horde of over a hundred of these warriors charging in, faces grimacing, wide eyed, shields in the air and looking just plain wild!

A few last pics to finish off with. 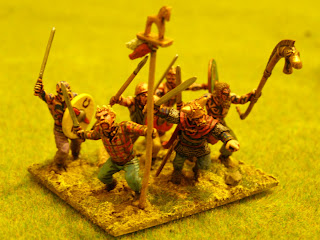 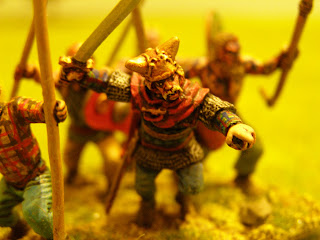 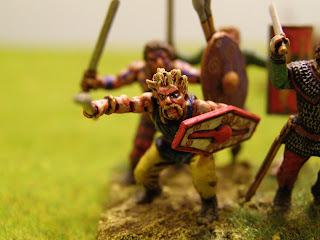 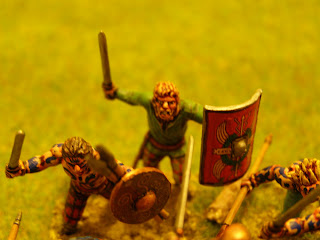 I included a couple of Roman shields too.  I imagine that captured booty would be re-used and no doubt used to taunt their enemy at the next confrontation.  I hope you enjoy looking at these figures as much as I enjoyed painting them.
Posted by Jason at 00:42 7 comments: