Bring Out Your Dead!

Last time was Romans.  This time it's Ancient Britons.  Something a little unusual and something I have never really bothered with....dead figures (or those in the process of having received something sharp and pointy!).

Hail Caesar does require lots of markers and as anyone who has played them knows, you need to keep track of the ongoing casualties taken, and of those taken in the current turn for the hand to hand combat results. 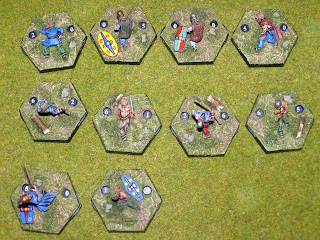 I use the left hand dial for the on-going tally and the right hand dial for the current game turn casualties.  The bases idea I borrowed from a photo of Rick Priestley's figures on the Warlord Games website.  The bases are from Forgeworld and were intended to show altitude and speed for some space-shippy game.  Thankfully the ones I purchased are used for real down in the muck stuff!

With Hail Caesar the on-going casualties (left dial on my figs) would stop at 6 when the unit becomes shaken. After that casualties per turn are moved only on the right dial, before being shared with supporting units and 'removed' from the original owning unit's marker (if it survives another round as a shaken unit).  Sounded a bit strange before I played it, but it demonstrates the greater combat input (and risks associated!) by supporting units as the unit in actual combat starts to crumble under pressure.  Being up close to the fighting will have an effect on supports, which I think is a nice touch, and dare I say it (contentious wargaming term alert!) realistic. 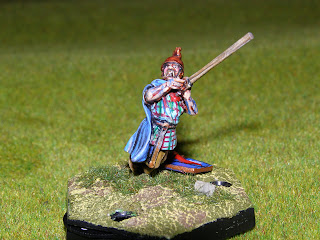 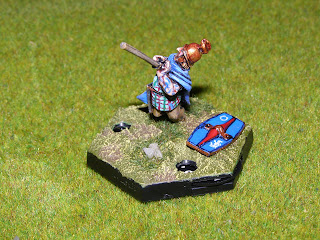 Most of my Ancient British casualty figures are from Old Glory, I think it's from the Gaul range.  The Old Glory Gauls are fabulous figures full of character and I just love them.  My regular opponent Ian bought their Imperial Romans on the strength of the Gauls. Unfortunately, we both felt that there was a great difference in quality, so the Romans went to the next Bring and Buy, and I stuck with Wargames Foundry for my Romans. 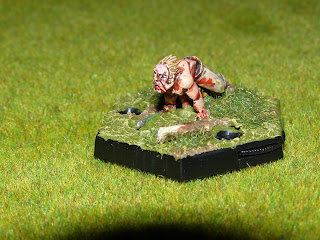 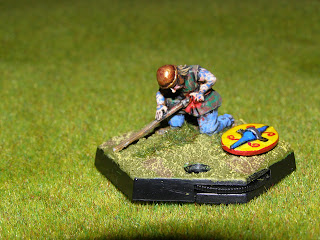 A couple more pics of the Old Glory figures.  The chap on the pic above has clearly caught a day-spoiling Pilum. 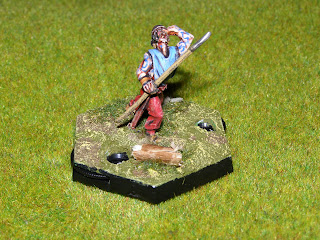 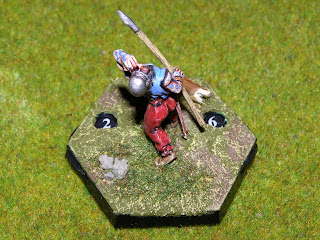 I'm not quite sure what inflicted the wound on this chap.  Possibly a sling stone from Roman Allies (or a really big horse-fly has hit him at full pelt, just like you get when you cycle in the summer and they really hurt!).

Anyway I hope these are to your liking.  I've got lots of Ancient Britain warband on the painting bench right now as I hope to get a game in next weekend, and the Romans currently outnumber the Britons!  We will see if I finish them in time.  I'll move onto other periods soon but I just want to paint as many of these as I can while the enthusiasm has hold of me.  I've got a playable AWI Continental Army painted up but I'm being too slow getting the redcoats done.  Of course when the 'Pike and Shotte' rules come out (a system based on Hail Caesar and Black Powder)  I shall no doubt be painting English Civil War at a huge rate!
Posted by Jason at 15:01 3 comments:

Just to show that I'm not a one-shot blogger, here are a few more pics of work in progress on my Roman Army. I'm also painting Ancient Britons and should really focus on one or the other, but no, for some diabolical reason I had both lots out on the desk at the same time.  I think I'll post the Ancient Britons pics in my next blog-post.

The Roman Auxiliary cavalry have turned out very nicely.  I painted 6 figures about ten years ago after an inspirational trek along Hadrian's Wall.  Recently I decided that I really needed a decent sized unit to look suitably impressive for my 'Hail Caesar' games.  It's funny really, but my horses (or ponies) ten years ago are quite different in colour to the ones I paint now.  I think the reason is the internet.  Nowadays I can go on Google Images or whatever, enter 'Ancient British Pony breeds' or so forth and lovely glossy photos pop up at me.  Ten years ago, pre-internet, I can only guess that my ideas of horse colours came from Channel Four's Horse Racing on TV!  All dark chestnut and black!  Thank you Internet :-) 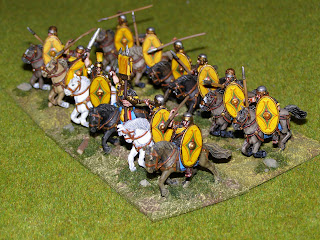 The figures are Wargames Foundry with Little Big Men Studios shield transfers intended for Warlord Games Figures.  I found the transfers to be a very close fit, with just a tickle of paint required at the tops and bottoms of the transfer to blend them in to the paint on the shield.  I had painted the shields bright yellow previously and didn't want to paint them white for the transfers as I didn't want to risk going over the lining in that I had already done.  The shield transfers look a slightly darker hue as a result, and not displeasing to my eyes anyway. 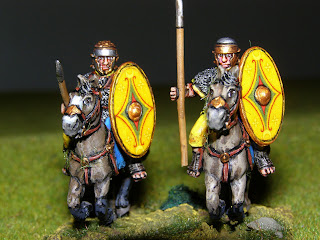 Here is a close up of the figures.  Sorry about the static grass on the figures. I should have lightly brushed them before taking close ups.  At least it's loose and not stuck to the figures!  Anyway they have clearly been pursuing British tribesmen through fields of freshly cut arable grassy stuff...

Here are a couple more pics for your enjoyment.  I will suss out how to get the best from my camera too.  I did use flash but I'm not sure using the macro helps.  Practice will make perfect. 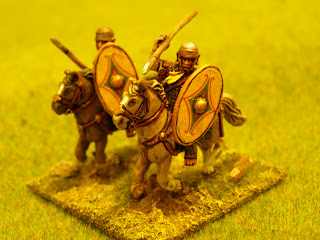 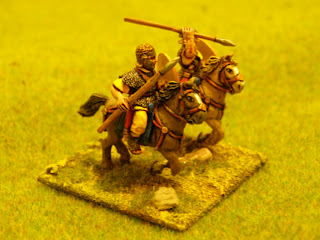 Oh yes, you will have noticed on the next pic  that I have yet to paint on the standard details.  I'm still researching this for one reason, but also I'm hoping to find a suitable transfer to put on to save me from having to paint lettering over what is actually quite a nice standard.  I like the way the chestnut wash flowed into the folds prior to highlighting.  If you know of a company who make suitable cavalry standard transfers please do let me know, thanks! 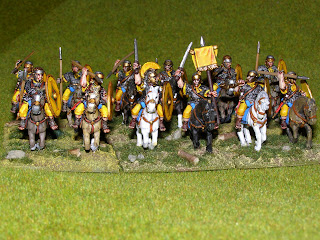 A few pics from the start of my Hail Caesar Game 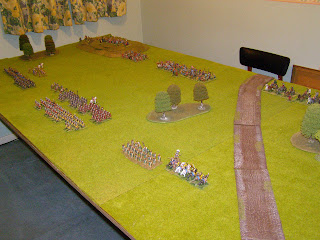 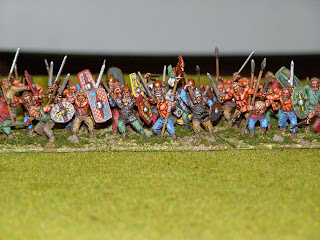 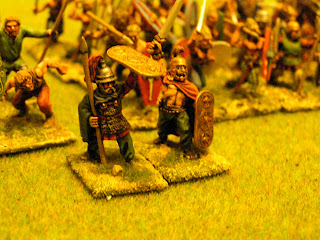 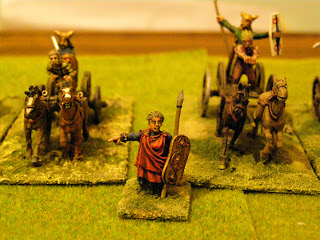 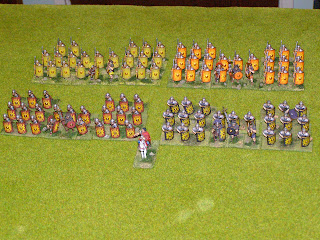 It was great to get the Romans and Ancient Britons out to give them an airing.  There was sufficient for 3 'divisions' (using the Hail Caesar term, rather than the strict military term) on each side which gave an interesting game.  The division containing 4 Legionary cohorts might be regarded as rather strong, and indeed they proved the battle winner,  however there was plenty of action all across the field. The first game with an opponent took 4 hours.  I thought this was excellent.  With so many rules the battle is often in the early stages at that point.  You know when a game is a success when you start repainting them and improving them that very same evening and commence list writing as to what else you need to add.  Even better my opponent, Ian, went away and bought 4 cohorts of Roman Legion from Warlord Games straight away!  Inspired!
Posted by Jason at 21:25 7 comments:

A blog! Wowee, this is all new to me.  I have to say that having followed some excellent and inspiring wargaming blogs for a little while now, I just felt compelled to start my own.  I hope, consciously or subconsciously, that it will help to inspire me to keep on painting....and playing, that all too rare thing which is the ultimate target for so many of my figures and is something that many of them have not taken part in yet!  Maybe feedback will inspire me to finish more projects and post pics up for more feedback, thus keeping the magic ball rolling.

Now all I need are some blog followers and some pics up!  Hopefully I'll look back on this mighty commencement as the start of something good.  Right now I'm just fathoming out what all the tabs etc do!

I should say a bit about my interests.  I play most periods of history and my intention is always to build 'playable' armies in all the areas I like.  My enthusiasm for new different periods of history goes in circles, and when that strikes well I just have to get the brushes out and get on with the troops for that period.  I managed to spend 2 years painting War of the Roses figures, but normally I seem to go in 3 or 4 month rotations.  However currently I have been so inspired by playing 'Hail Caesar' games (3 playtest games and one with an opponent) that I have started a project to re-paint, re-base and build on my Imperial Roman and Ancient British Armies.  I desire nothing more each evening other than to get home from work and get painting (and not fall asleep early!).
Posted by Jason at 20:59 No comments: