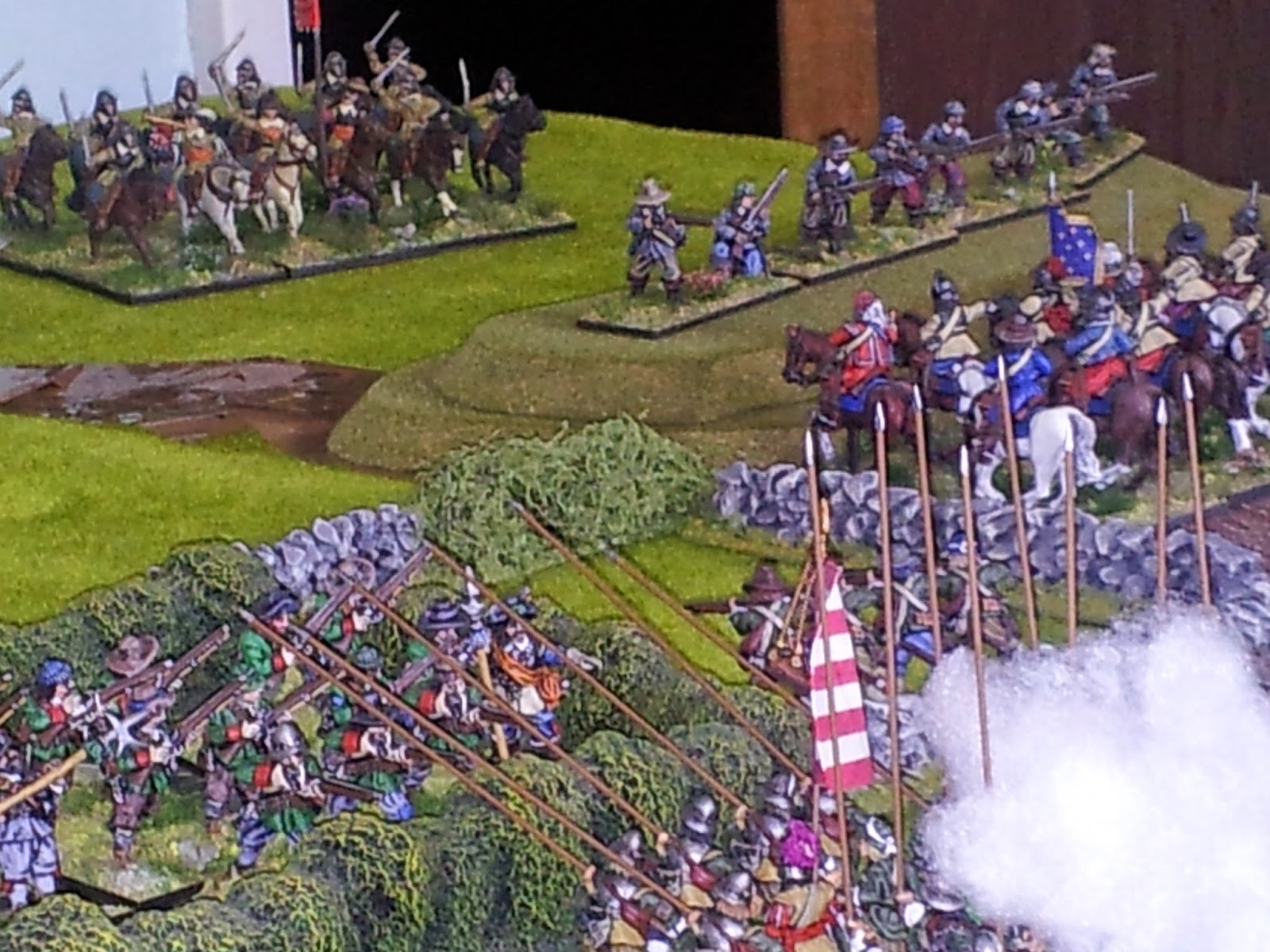 The Pike and Shotte rules received a very welcome airing this evening.  It's  been about 15 months since last playing a game with them.  Hail Caesar and Black Powder, the other rule-sets in the trilogy, both having been used since.

This evening Ian took on the role of the Royalists against my Parliamentarians to re-fight the Battle of Whalley.  The scenario was lifted straight from one of the Caliver Books produced English Civil War Gaming Scenarios books.  I have four of these and for many years have wished to have enough troops to be able to play a scenario from this excellent series of books.  With Ian's troops added too we fielded both sides very satisfactorily.

The Scenario
The battle is one of the northern battles and features a Royalist armed reconnaissance towards a mutinous and seemingly broken Roundhead force.  What should have been an overwhelming push on beaten troops turned into a rout for the Royalists as the Parliamentarians had got their act together and laid an ambush. The battle was fought down the length of the table.  Most of the table is occupied by the Royalists.  In the uppermost corner of the photo above is the only visible Roundhead units (2 units of cavalry) on table at the start of the turn.  It became clear to me on reading the scenario that only half of the scenario should be read out to the Royalist player.  It was better he didn't know of the ambush and was only told that as well as the two regiments of cavalry (which his attention would be on), there might be other units hidden on the board or kept off as reinforcements.  As per the scenario, I had two regiments of musket hidden ready to pop up and give fire in the stone enclosures.  Another special scenario rule was that if any casualties were inflicted in this first volley, then the receivers must take immediate break tests. 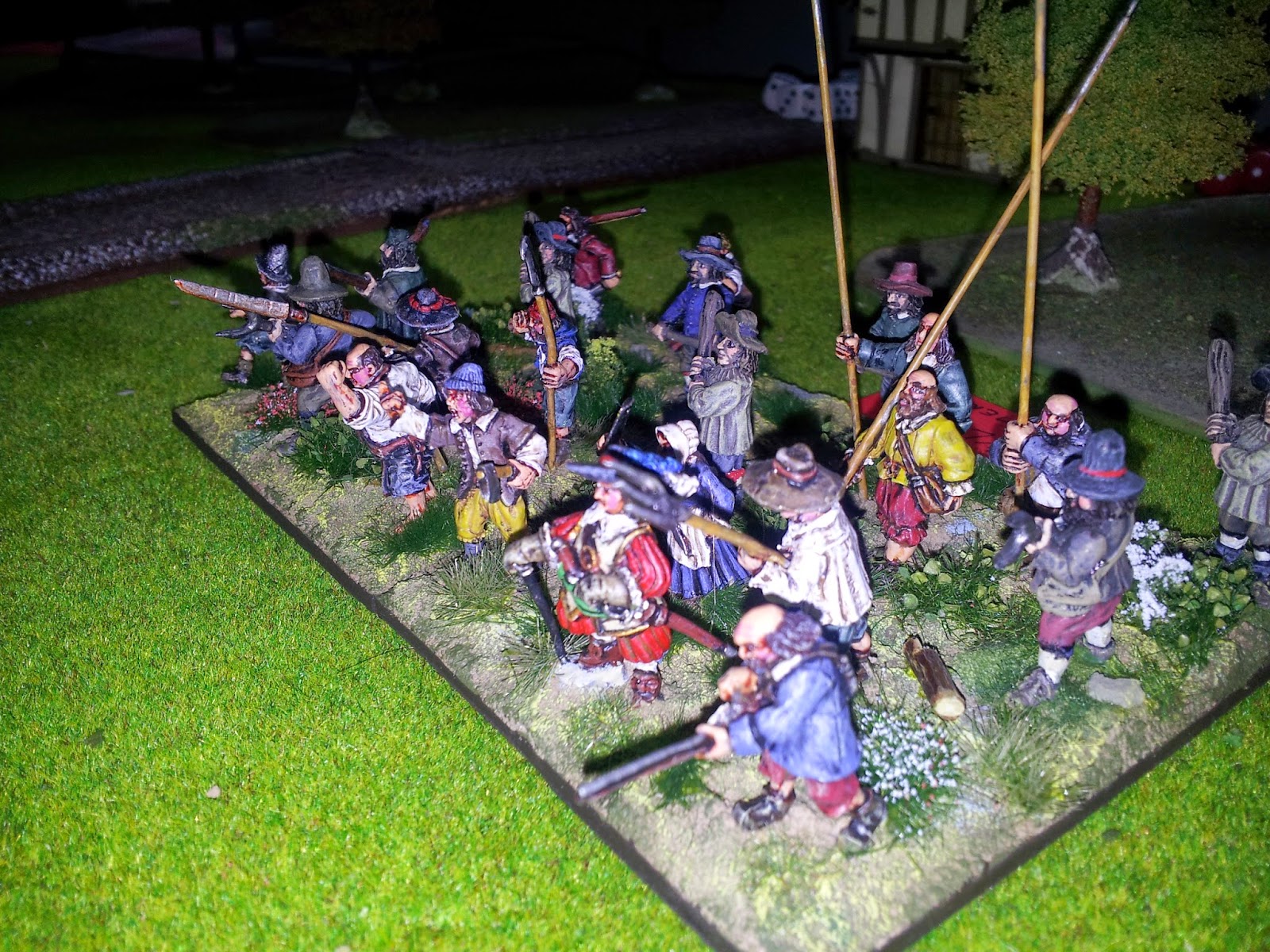 It's the Clubmen - just a pity they decided not to move far from the Alehouse in Whalley in this game!

Royalist: An divisional sized army of three brigades.  This consisted of:


Parliament:
Veteran units were given 'Reliable' special rules.
Clubmen were both 'Militia' and 'Rabble'
Dragoons were 'Marauders' and could use the 'Fire and Evade' special rule

Rather than give a game turn by game turn account I will instead summarise.  I will also avoid using too many pictures as my camera phone had too little battery to use flash and as a result my photos are well below standard. 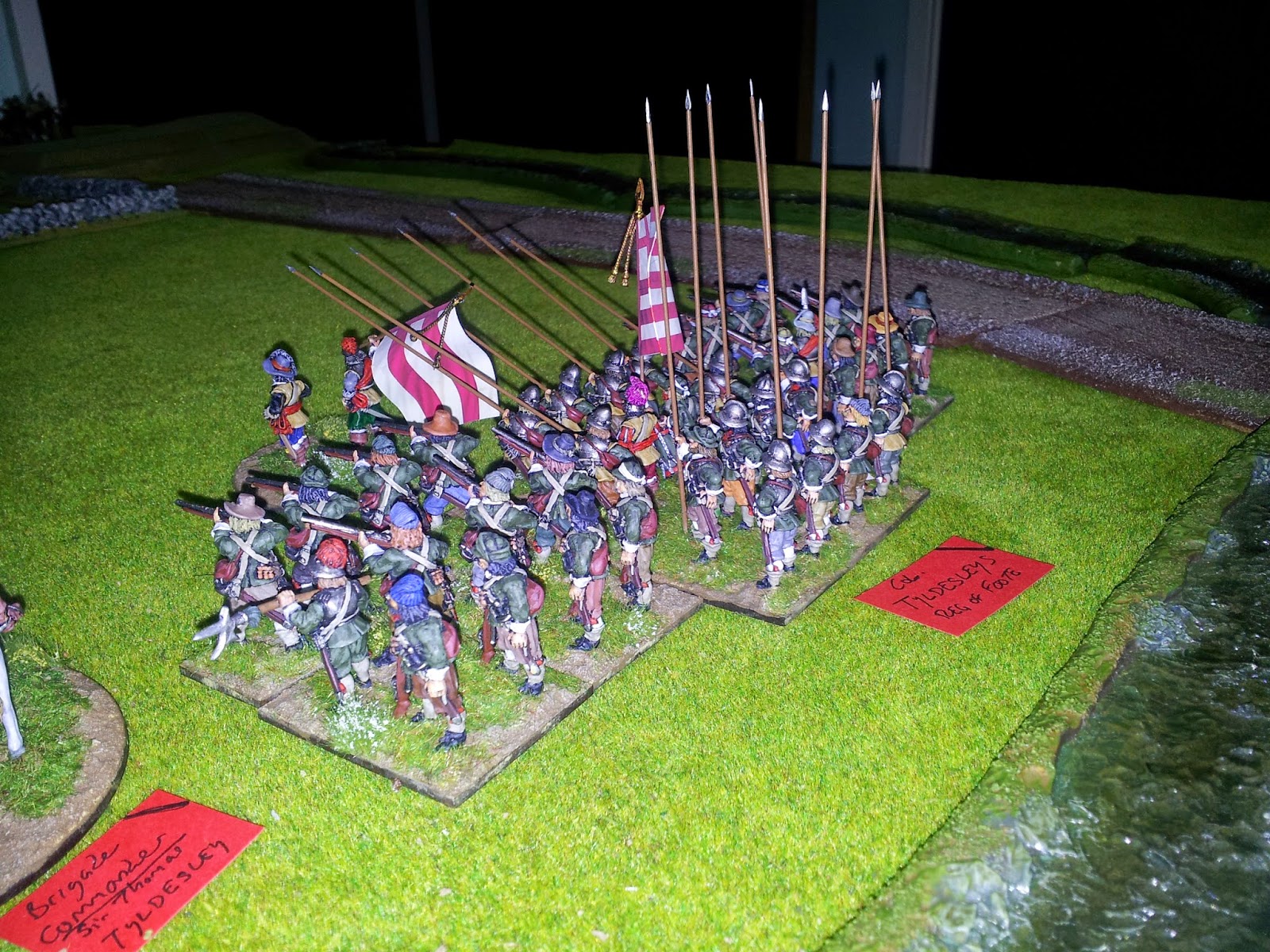 A Brief Game Summary
The ambush worked an absolute treat. The Royalist advanced very keenly straight from the start and received a volley at point blank.  Two units of Ian's finely painted troops (Cornishmen in this case, standing in for the Earl of Derby's infantry), broke immediately. 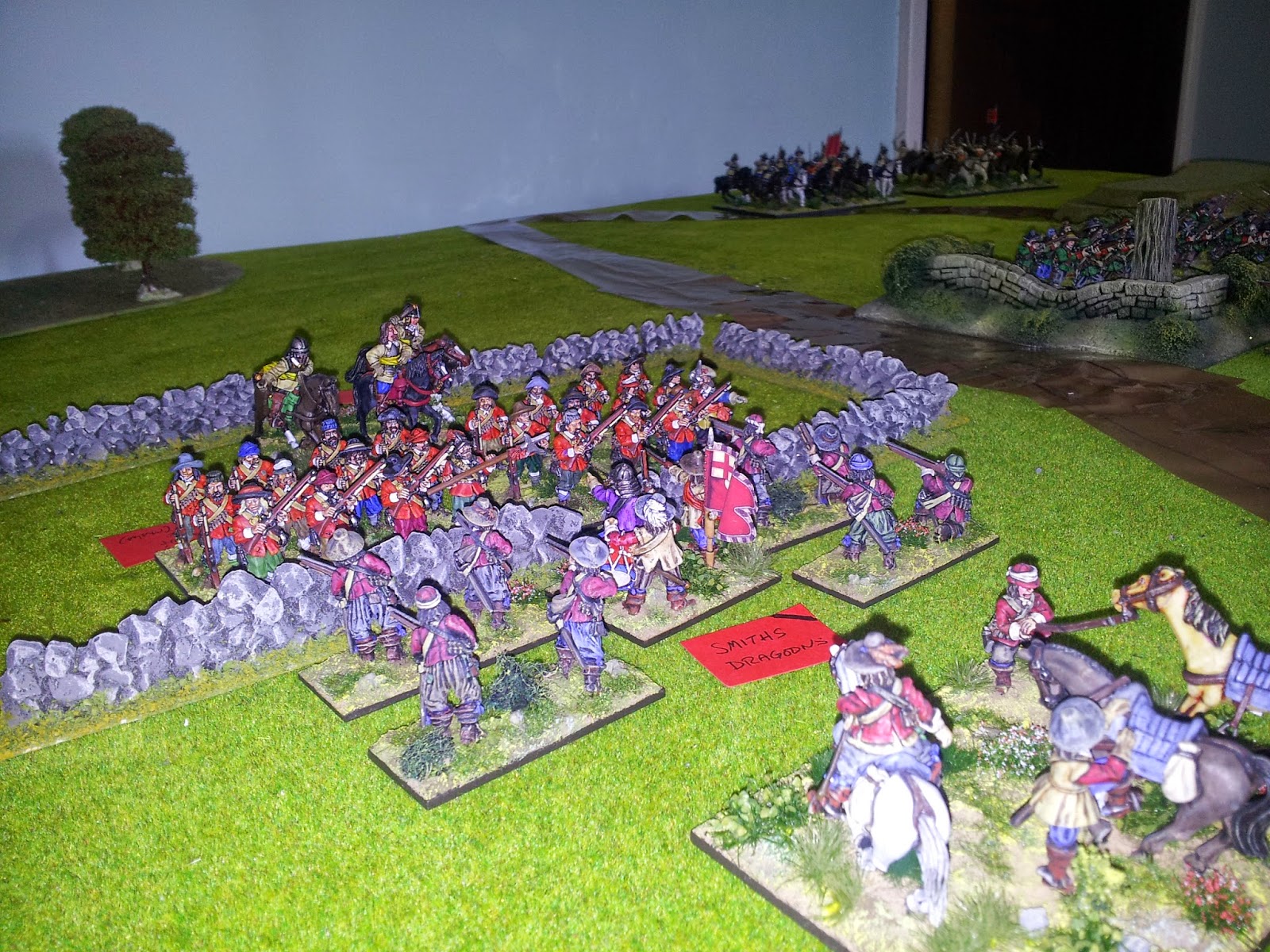 The ambush is sprung and the scouting Royalist dragoons take a full volley at point blank in their faces, breaking them!

The Royalist cavalry moved forward and engaged the Parliamentarian  dragoons.  The dragoons somehow stood the initial charge and a desperate struggle went into the next game turn, when the dragoons broke.

A tough battle broke out amongst the stone enclosures in the centre of the Parliament position.  A unit of Royalist Pike took volley after volley and refused to break despite four break tests.  In the end a charge with musket butt and sword finally broke them! 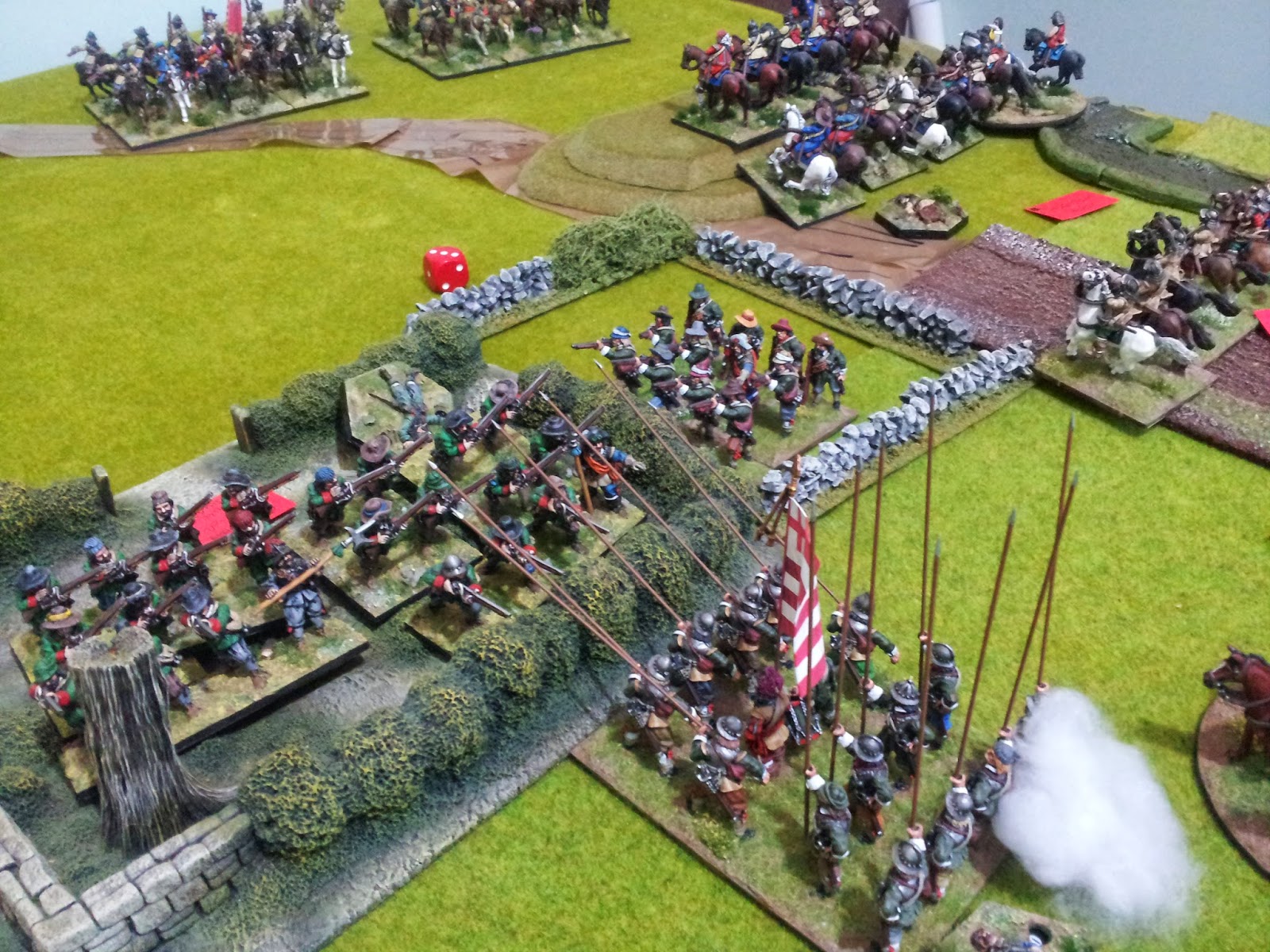 The desperate battle.  Those pikemen just would not break!

Poor order communication slowed down any prospect of support for the Royalists.  The clubmen refused to move all game.  The Royalist cavalry were happy not to charge against my cavalry.  For my part I was to hold my cavalry back and await developments.  They could either countercharge or rescue my infantry if needed.

With the breaking of the Royalist pike, the whole Royalist brigade broke.  A Parliament victory was awarded.

Conclusion
A superb game which was great fun and allowed the Royalist commander to make exactly the same mistake that happened in the actual battle, by advancing straight into an ambush.  It was great to see the really nice Bicorne produced figures on the board again.  Pike and Shotte gave yet another excellent game.  Though my painting time has taken an enormous hit of late, it was superb to get a game in tonight. I'm very keen to play another scenario again soon. 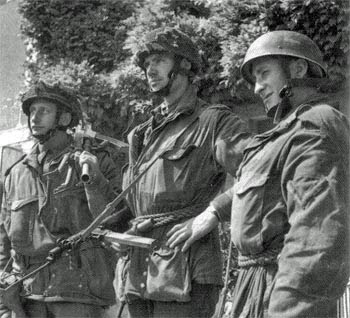 This is more of a 'this day in history post' but also a post in tribute of one of the most daring assaults of WW2.  Since I read Stephen Ambrose's Pegasus Bridge book as a teen this operation has always held my imagination and admiration.  The feats of Operation Deadstick will no doubt be very well known to you and the wiki article gives a concise history for anyone who isn't familiar.

On this 70th anniversary of the landing at 2316hrs BST, I for one will be raising a glass at that time to their memory and their exploits.

The photo above for me is just so iconic.  It shows very well trained, determined troops in the actual kit worn in the attack.  Utterly hard as nails is one phrase that comes to mind.

Normal service will resume from me when I have actually got to paint something.  Studying and revising a multitude of lists for an exam is not leaving me much time.  My memory just doesn't remember lists - in fact I'd have to carry an umbrella to prove I'm British because I can never remember a password!
Posted by Jason at 21:08 2 comments: