Firstly I bought some Dark Age (early medieval) Buildings which I painted up, to a better standard than I thought I could (I'm a figure painter really).  These featured in a post a few months back.

I liked those buildings so much that I took the plunge and ordered a large set of late medieval buildings. 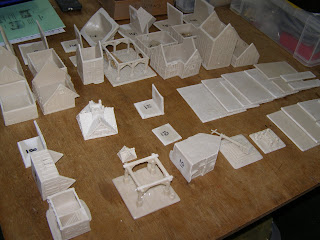 The numbering in the above picture was done by me so I didn't get confused as to which bit belongs to which building! I had lovely afternoon sat in the sunshine with a bucket of water and a nail brush and had an enjoyable unwrapping session followed by cleaning off the resin residue.
I have to compliment Grand Manner on their packaging.  Their care and attention is on another level altogether. I should have taken photos of the neatly individually bubble wrapped parts, with polystyrene foam inside supporting walls and beams.  As a result each building was most definitely undamaged and arrived very safely.  It was a joy to unwrap them and examine each one in turn. If it wasn't for the intense heat of the blazing sun, I would have said that it felt like Christmas! 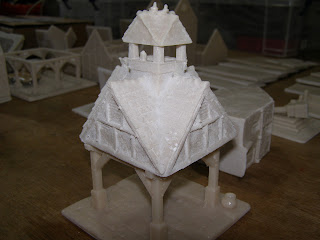 The sculpting on the buildings is magnificent. On the market square buttercross above, there are even pigeons sculpted on. Quite wonderful! 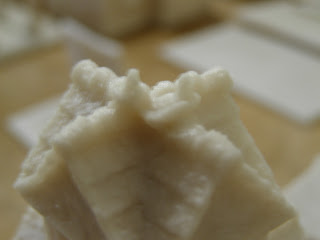 Close up - the blurring is down to my poor camera-work! 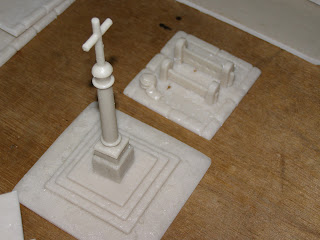 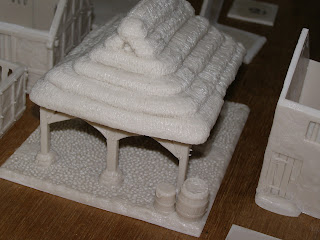 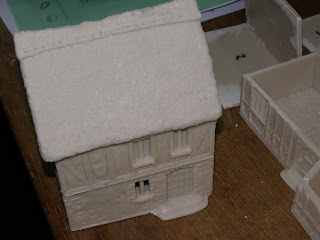 And lots of buildings and also cobbled streets.
I thought I would post the pics of these now, because it will probably quite some time before they all get painted up!
Their uses will be frequent though, and I suspect they will become part of St Albans for the Wars of the Roses, and numerous English Towns for Civil War battles too.