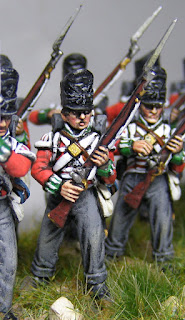 Napoleonics...probably my first real wargaming interest.  I started with Airfix 20mm plastic figures like so many of us, after having collected 1/32 plastics and loving the box art.  20mm gave bigger battles and with tape measures and dice instead of throwing marbles.  I don't need to go down a well trodden path, I think we mostly share the same journey.

I then had some of the 25mm Prince August moulds and in the late 1980's and made some lead figures on my dad's electric cooker in the kitchen.  I added some Minifigs from the shop at Devizes in Wiltshire and made some units. I still have memories of the shop keeper going back to the back of the shop after every hand written order line and checking to see how many he had.  Sometimes, a few...sometimes none.  Making full units was hard in those pre-internet days!

I properly got back into wargaming when I bought my first house and took over the spare room in 1993.  This is the Status Quo. There has been no change, other than the troop numbers and storage boxes in my spare room...which have got larger and larger and larger...

..and yet...my Napoleonic armies have been stop/start ever since. I can barely call them armies. I'll paint a stand and then stop!  Then I'll try 15mm then 6mm and then back to a stand of 28mm after a gap of several more years. It's odd. I have probably 10-15 wargaming periods that I play and Napoleonics has always been neglected since that early start in my teenage years.  Is it the lace and detail? Probably - I can paint American Revolutionary War troops, lace too with no qualms.  Napoleonics always seems a level too far. I can paint a unit of 30 Normans in the time it takes me to paint 6 Napoleonic figures. 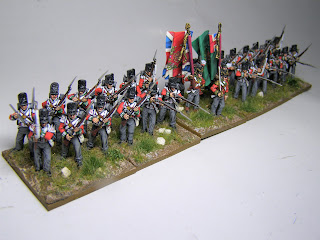 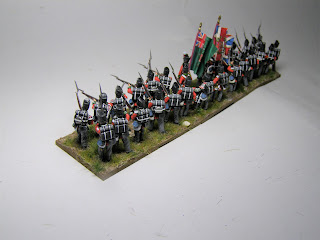 I started this Regiment back in 2015, inspired by the Waterloo 200 years commemoration.  They are the wonderful 28mm plastic British Infantry produced by Perry Miniatures.  I painted a stand at time to get into it it and then just stopped.  Reading some Napoleonic memoirs recently and also purchasing an original Napoleonic carbine a few weeks ago, inspired me to look at my collection again. 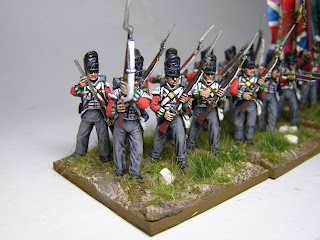 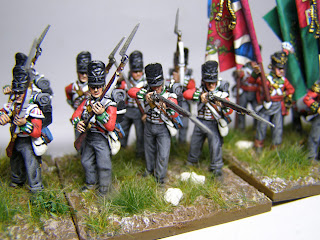 I had one stand with flank company men and the command stand to go to complete the Regiment...the dreaded command stand.  Research was required on the drummers uniform, drums, officers lace etc etc nothing was straightforward!  I just had to go for it.  Three weeks later they were done! 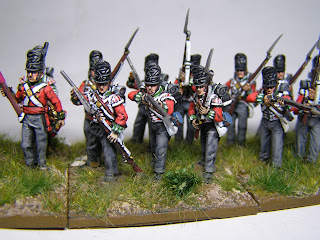 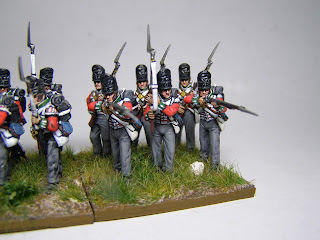 The flag is by GMB. This is slightly larger than the prints that the Perry's thoughtfully provide on their on painting guide in each box.  I like the flags by GMB so try to use them whenever possible.  However they did require some trimming to fit on the gap between finial and hand.  I did kind of wish I used the Perry's supplied flags with just a bit of extra highlighting afterwards. 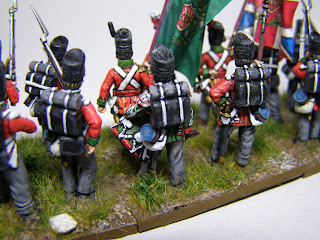 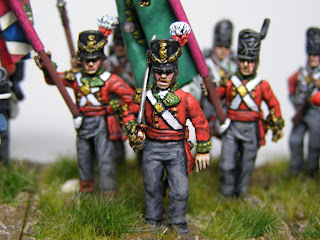 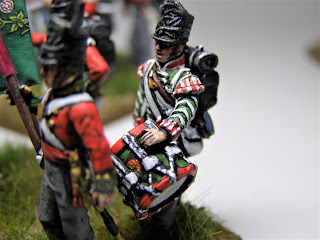 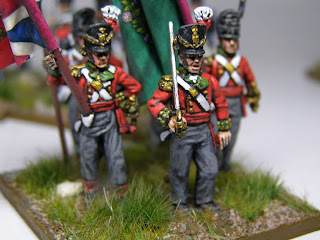 Once I finished these today, I just looked at them and wondered why I don't paint these and nothing else.  I am really pleased with them. There is something so iconic in that Waterloo campaign uniform, with oilskins over shako caps and grey overalls. A mix of the decorative and practical that shouldn't work but somehow does.  The Perry's did a wonderful job in giving each figure character and the right look.  They were a joy to assemble too.  I could have gone more regimented with their appearance, but I wanted a line of battle appearance, when fire is coming in and hearing goes!
Will I be painting more of these...oh yes.  When will it be?  I don't know.  I put excessive detail in (again) for wargaming figures, despite telling myself that I wouldn't.  I feel like doing something lace free now.
I suspect that once I take my Paget carbine down the range the inspiration to paint more will come straight back again as soon as I get the whiff of powder!