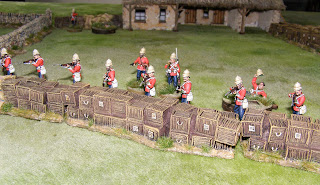 The last few weeks have seen my first proper foray into making and painting buildings.  This is not something that I normally do.  I find buildings to be a complicated beast on the wargaming table unless it's a skirmish game. A real scale conundrum.  Anything approaching scale size for a figure is probably going to be the same length as a battalion, so the small barn becomes about 300 yards long on the board! 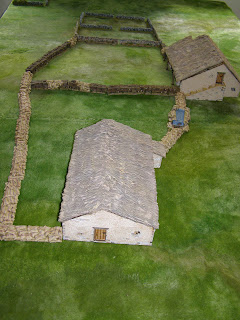 However, this is Rorke's Drift and it just has to be made to work!  I was inspired by the game scenario in the Zulu War supplement produced by Warlord Games.  To be honest I think the scenarios in this particular book are brilliant. A wide variety of methods of play and they all look great fun. 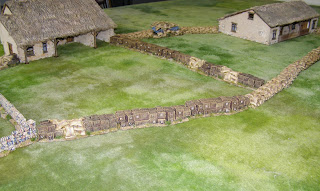 I really liked the look of the Rorke's Drift battle set that Warlord Games brought out a number of years ago.  Unfortunately I was a bit slow and by the time I decided to buy one, they had become almost unobtainable.  After an extensive search I found a set advertised by a company. After ordering it they contacted me to confess that it was an error but they had the same parts to put a near complete set together but not 'in the box'.  I took up the offer. 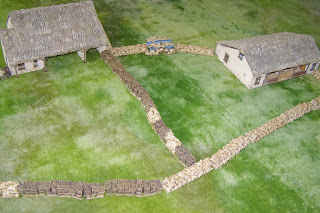 Most of the items are here, though I had to buy the barricades and walls from Warlord Games recently.  Of course, Warlord Games are back in full production of the battle sets again now! 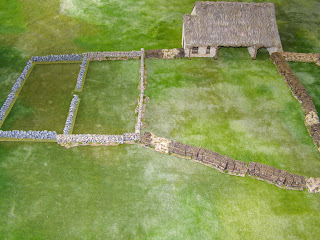 I decided to use Perry's British Infantry as they are such superb figures.  I just really like their figures...a lot! 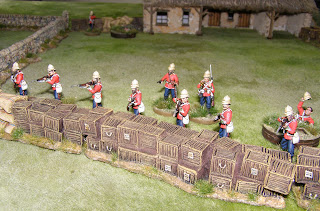 I also like all of the biscuit box barricades made by Warlord Games and they were not too hard to do once I decided on methods. I did consider whether to use washes or dry brushing and ended up doing both. 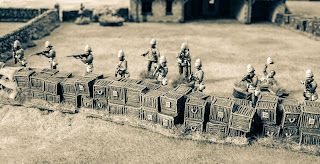 Photo above by war correspondent Norris 'Noggs' Newman (or maybe not!) 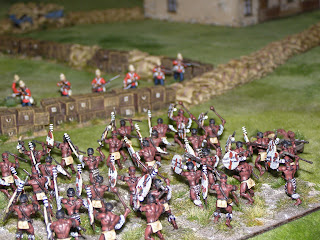 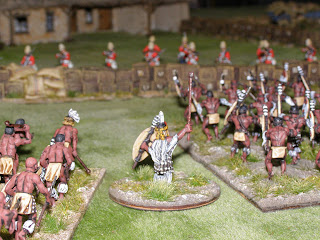 The Zulus I have so far are mix of the Warlord Games figures and Perry's. I'm a long way off from having thousands of them yet! 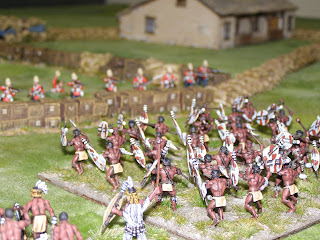 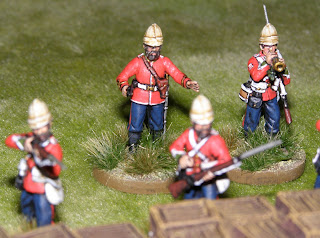 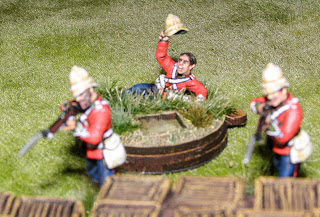 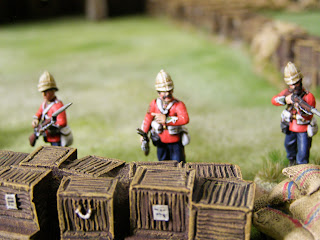 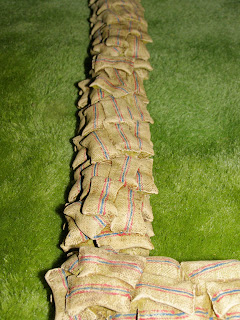 The dreaded mealie bags - Oh my goodness, the painting pain that these were!
Before I get onto the buildings, I should mention the Mealie bags, again made by Warlord Games.  These are really nice and look right.  I have seen some sets by another company where the bags have been stacked on top of each other in the fashion that a child might stack 4 bricks and then stack 4 next to them and so on, with no overlap.  I suspect the Zulu's would have found such a method of stacking literally child's play to knock over.
So top marks to Warlord Games on getting a great 'hurried' but stacked 'under the eyes of a Royal Engineer Officer' look about them. The texturing is nice too.
I was not sure whether to paint the red and blue lines on them. I did wonder if the lines were authentic and on Googling the question, I found the topic had been asked some years ago on the TMP page.  Unfortunately the poster had been utterly ridiculed (the fate of many decent sorts asking help I note, on that very odd website).
I thought his question valid, as the lines really do say 'Mealie bag' and not sandbag. It's that little attention to detail that makes a difference.  It's why we paint the right lace, collars and cuffs on our Napoleonics or Seven Years War figures.
Anyway, a little search found this portrait of Rorke's Drift by Lady Butler and the detail is below. Perfect! 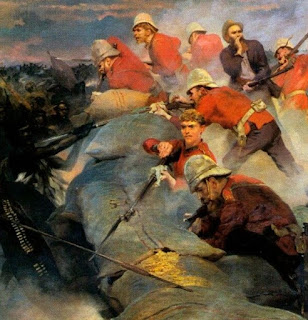 The frustrating bit...  Having decided to put the lines on, I settled on Carmine Red and a Foundry French Blue 'C'.  The lines took ages.  Ages and ages.
When I had just two more barricade sections left, my mind wandered and I thought to myself. 'I wonder if there is a market if I designed some simple way of putting lines on models?.....and then it hit me...a pen!  A red pen and a blue pen... so simple!. Biros would be perfect!  And so they were!  A 4 hour job of one section became about 10 minutes.
It was miraculous...at least until I put the spray varnish on. Then the colours bled into the mealie bags...and so I had to start again...with paint and thin brush again.
Ah well...It's done now! 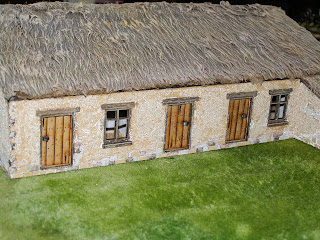 I have only ever made one small MDF building before so this was really interesting to make.  The buildings are from '4Ground' and sold in the Warlord Games sets.  The buildings go together really well and I quite enjoyed making them.  My only issue with MDF is that they look a bit flat. I read of a technique using 'Degu Dust' from pet supplies shops to texture MDF buildings to put some life into them.  As ambitious as it was, this is what I did.
The thatching is teddy bear fur which I coated in PVA glue and water prior to painting. There were some long off-cuts which gave me immense fun pretending to female friends that I had grown a 'ginger mullet' over lockdown by sticking one end in the back of my collar.... Above is one of the nicest things that I have painted up! It is a resin model of a wagon covered in mealie bags. Ammunition boxes and biscuit boxes are on there too as part of the casting. Even one of the mealie bags has split open inside and spilt the grain. It is a wonderful model and made by Warlord Games. Again top marks to them, it really is an absolute beauty. 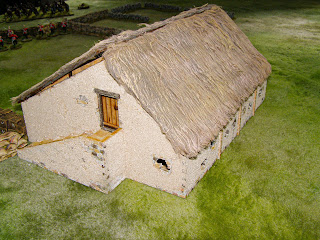 Some more shots of the buildings follows.  With the Degu Dust it was necessary to apply it over PVA glue and then I had to use 3 thick coats of varnish spray to help it to stick without rubbing off. I store it in it's own boxes and I won't be playing Rorke's Drift too frequently, so I hope it lasts. 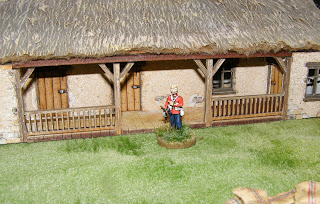 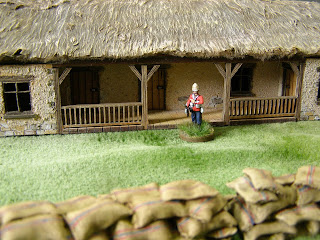 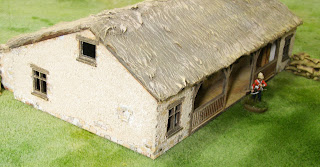 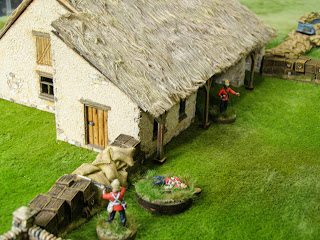 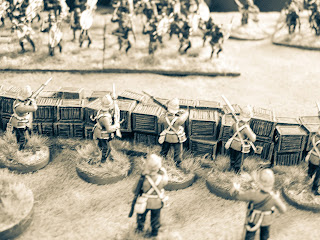 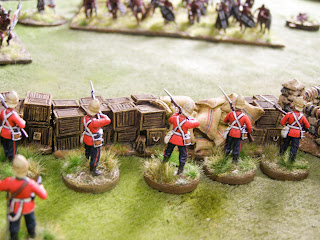 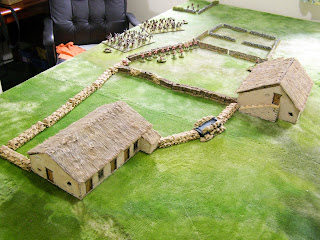 One downside to these battle sets becomes apparent when finally putting it all together.  It is large.  I think I need a bigger table and this one is 8 feet by 4 feet!  I'm really not sure how I'm going to be able to play with it on the field! 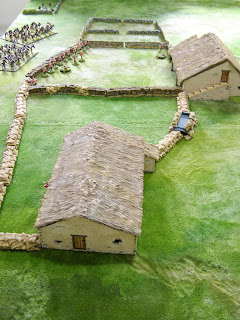 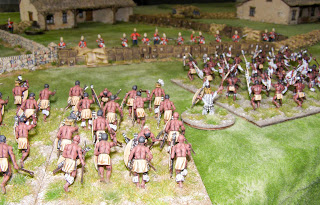 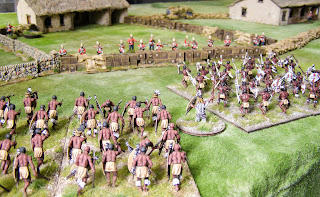 There is one major absence (besides enough troops and table space!).  And that is the mealie bag redoubt.  I note that Warlord Games no longer sell it separately and only put it in their boxed battle sets.  I will write to them to ask if they can sell one separately (which would be jolly nice of them) or I shall have to keep checking Ebay or make my own.  The latter will be a joy of course...as this will mean not only having the pleasure of painting more lines on Mealie Bags but making them too!

Maybe I should have opted to create Isandlwana!

Update 26 May 21 - I emailed Warlord Games last night to ask if I could buy the Mealie Bag Redoubt set  from them even though it is a battle set only item, and they have very kindly agreed! I'm delighted - Thank you very much Warlord Games!