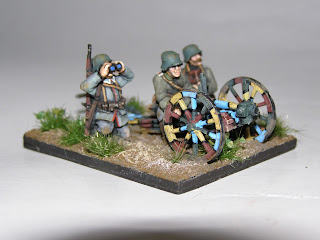 More progress has been made with my Great War collection in the last week.  Some models take on a life of their own very quickly and just fly along with painting.  That's what happened with these.  I found I couldn't wait to apply paint to them. 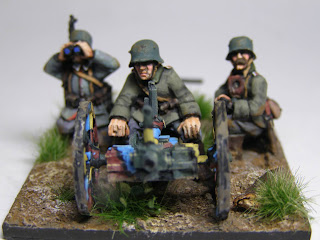 This 3.7cm Anti-Tank gun was needed as a counter for the Mark IV British tank that I added recently.  The gun was added in the last weeks of the war and fired a purpose made armour piercing round with exploding charge rather than being solid shot.  The low silhouette must have made it deadly.  It was capable of penetrating 15mm of armour at 500 metres. 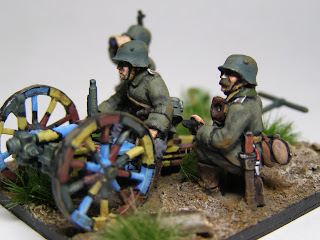 Initially I painted the gun in field grey and I found sources showing random daubs of a brighter paint (possibly a dark yellow) applied in splodges.  However, on a model this can just look awful and I was also struck by the gun on the North Star website where the Great War Miniatures models are shown.  This pattern was used on their model just looked so interesting to replicate. 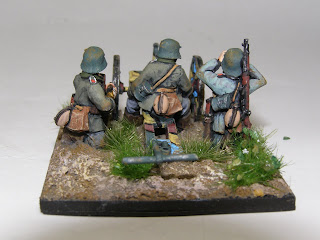 It's one of those really interesting things, that near the end of the war when there were so many desperate shortages of materials and no time to dally about, that the Germans spent so much effort applying complex paint patterns. A contrast somewhat to the WW2 Soviet method!.  It does make it interesting for the wargamer though. 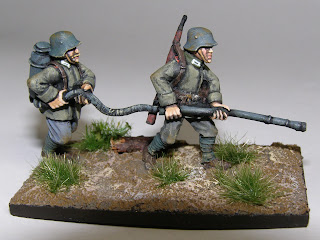 The Germans have a few choices of weapons to take on the British tanks now.  This flamethrower team of the III Garde-Pionier-Battalion will be sure to make its presence noticed on the battlefield. 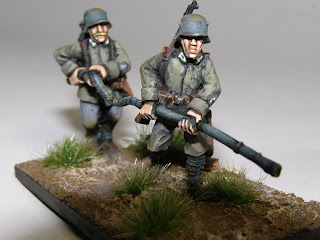 The black epaulettes with red lacing for the pioniers, Garde Litzen lace on the collars and flamethrower specialist badges on the sleeves identify the troop type. 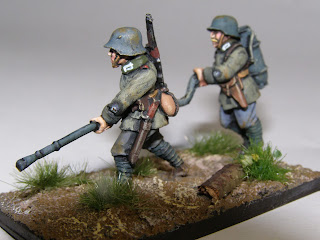 I must admit to not getting bored with painting German WW1 troops.  There is a lot of potential to make little changes in leather and fabric colours.  So far the AK paints WW1 German Uniform shade is pretty spot on, though I find the highlight a touch too light so I apply a light wash of the main colour just to tone it down a fraction and also help to give a more woollen look.
With the chronic fabric shortages, re-issues of the older tunics was quite likely and much patching and repairing to keep uniforms going longer. So some of my 1918 troops (such as the Junior NCO with the gunners) has the older tunic of a greyer shade. 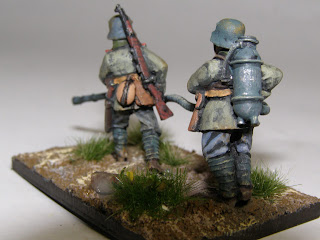 There will be more German to follow soon and then I might have enough troops - a platoon each side plus supports, to modify the Chain of Command rules for the Great War and give them a go.

Note mainly for self on photography: First pic used the 'M' setting and flash with daylight bulb above and in front.  Seemed to be much brighter and clearer than the usual settings. More experimentation seems to work as it might mean that buying a light box is unnecessary!