This has to be my first non-historical post!  Though I will use the reasoning that 'Little Wars TV' used to explain... Star Wars...it is history. It just happened a long time ago in a galaxy far far away! 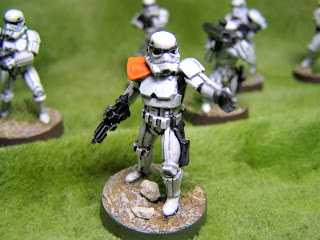 I must confess, I always liked the first 3 Star Wars Movies.  I saw one of them at the cinema when it came out (Return of the Jedi, I think).  I have always been baffled as to why no one has brought out a full battle set of the Hoth battle in miniature. It would be great fun. A missed opportunity I think. 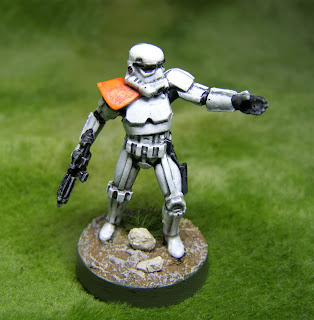 Anyway, I gave in to temptation. I bought the Star Wars Legion set as I have been having so much fun with Star Wars 'X-Wing', I am opening my mind a little bit more to Sci-Fi type games. 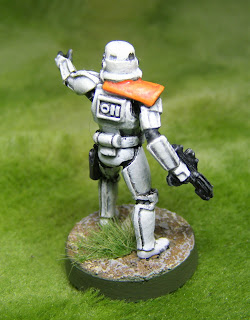 The Imperial Stormtroopers were my starting point. I have painted MG34's and Sterling SMG's before so I felt a bit more on familiar ground! 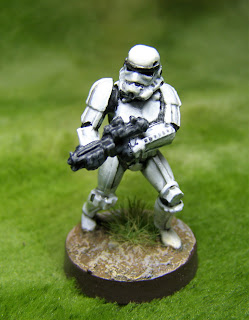 The Star Wars Legion boxed set also contains a squad of Rebel troops, Luke Skywalker, Darth Vader, an AT-RT walker, 2 x 74-Z Speeder bikes and some barricades. In addition there are loads of markers and tokens and cards, as well as dice. 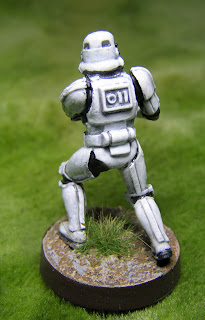 The boxed set is very nice indeed. I was impressed by all of the plastic figures and assembling them was fun. 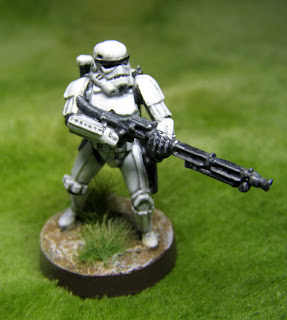 The figures are close to 40mm in height and are substantial and well detailed.  There is lots of character about them. 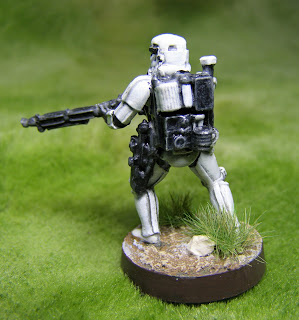 When researching what colours the various equipment should be, I used Google a great deal and was surprised that there are re-enactment units who recreate all of this in great deal.   The images they used helped me enormously 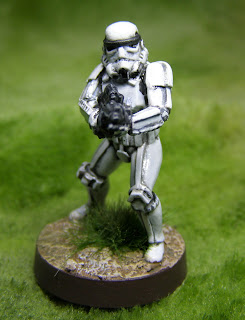 There is as you can see, a lot of white. I realised that I would have to take some care to lowlight items or they would just become amorphous white blobs and appear too toy-like. 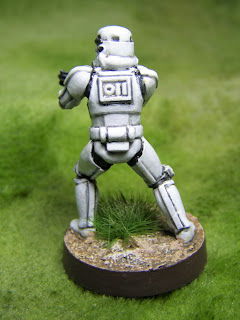 I undercoated with Vallejo Dark Sea Grey and applied matt white as a semi-wet application. I did this twice where it needed it.  When dry I applied a wash of Army Painter Dark Tone over the whole figure to assist me in giving lowlight.
White was re-applied.  The black areas and weapons were painted and dark sea grey was applied as a dry brush.
Final touching up was applied.
I finished with 2 x coats of hand applied Vallejo Gloss Varnish and then when dry, matt varnish on the dull items. 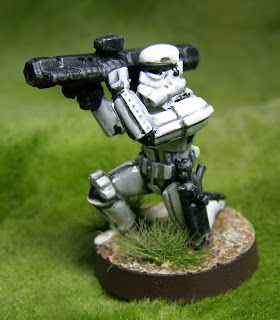 I used my usual method of applying a sand/acrylic paint/water mix for the basing.  This was painted brown and gradually lightened. A few random tufts were added to add interest.  The idea being that the terrain could double for tundra/desert/ grasslands.
I toyed with the idea of painting the grass blue or purple like it was an alien planet...but I think that would have just looked too weird. 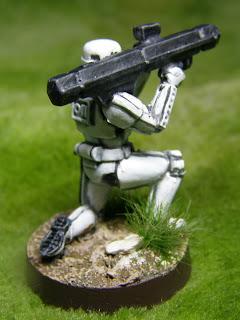 All in all I am quite happy with these.  I have made progress on the Speeder Bikes (which are again, lovely models).  However, I came to a stop as I just needed to paint some 'proper' historical troops. 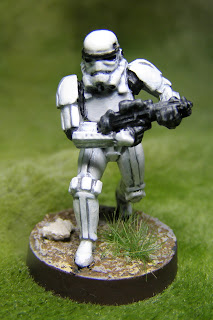 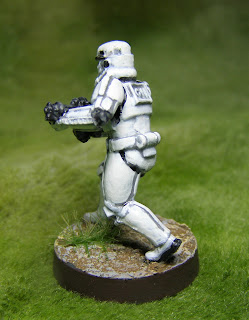 I will get back to doing these again soon though.  I don't plan on having a massive Star Wars collection, but more something I can do skirmish games with, and almost play to a narrative.
I'm inclining to playing these with 'Chain of Command' Rules as there is a group on Facebook who have already produced a lot of excellent information.   I already like the rules and it has the advantage of not needing to cover the playing surface in cards and tokens all over the place.  It might even be that 'Muskets and Tomahawks' can be adapted well, I'm open to trying anything and having some fun with them.
More to follow...! 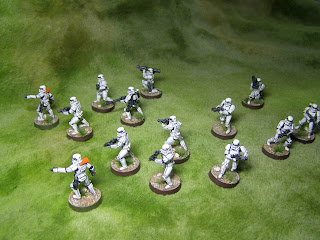