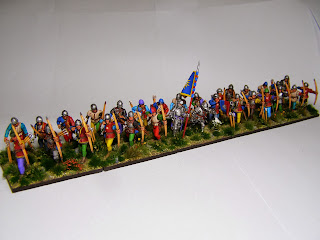 Having enjoyed painting the Duke of Exeter's bowmen recently (see last blog post), my enthusiasm carried me on to paint another box of Perry's Wars of the Roses bowmen.  This time I painted Edward IV's men. For too long now my Edward contingent has been formed of his men-at arms, but backed up with Levy Militia billmen and ad-hoc crossbowmen and handgunners to give him the firepower.  Not any more though! These bowmen are a very welcome addition and further improve my Wars of the Roses collection. 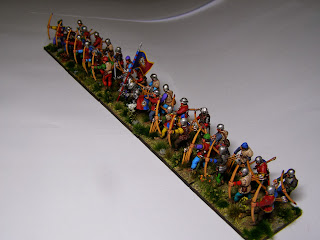 Even though I had just completed a box of the Perry Bowmen, I still found it an immense joy to assemble, prepare and put the colours on them.  I still marvel at the detail of the casting and the characters one creates as they are assembled.  I could carry on with saying how good I think the Perry sculpts are, but I imagine you know that all ready! 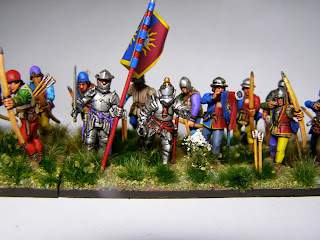 The command group was enhanced by the banner set from Citadel Six.  I have become a big fan of their wonderful flags and banners.  The banners are transfers/decals which adhere to a metal sheet, which is carefully wrapped around the flag pole.  Flag poles are provided in their sets, but I decided to use the existing Perry's pole (largely because I had already painted it up!).  The flag went on with no trouble at all and I really like how it looks. 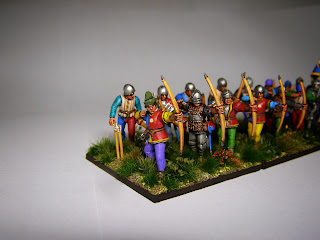 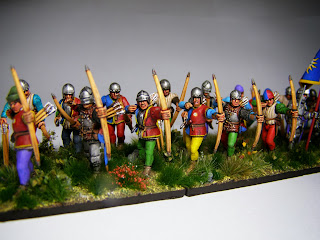 I used my rather labour intensive painting methods as used to paint the Duke of Exeter's bowmen.  It means it takes me a month of evenings (and some weekend days) to complete a 30 man unit but I like to get the figures looking as good as I can.  One can always go further with detail of course - but there is a point where you just have to stop if you want to finish them and see them on the table! 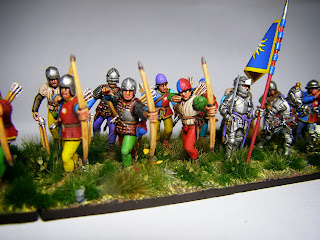 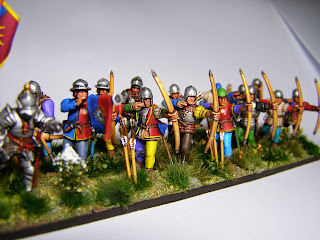 The paints used are mostly Vallejo and Citadel and Miniature Paints.  Basing flora is again by Mini Natur. 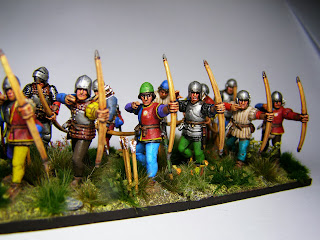 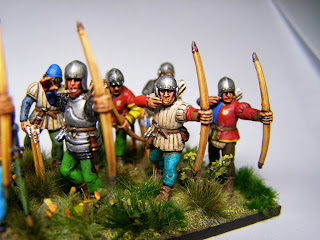 The livery badges on the fronts and rear of the livery coats are again by Citadel Six.  I'm getting much more confident in using these.  Despite their small size, they are easy to use if their detailed instructions are followed, a really sharp blade is used to cut them and decal softener is applied. I'm now happy to slice them apart to use where just a hint of badge shows, whereas a little while ago I would have tried to paint them on instead. 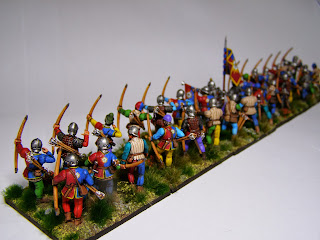 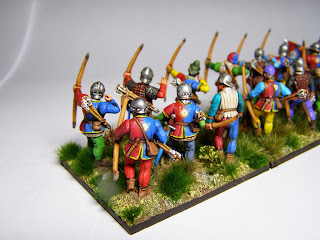 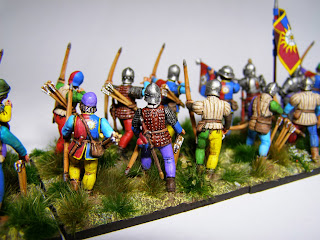 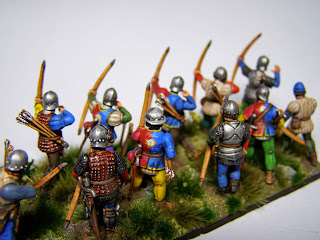 So what to paint next?  Well these were so much fun that yesterday I spent the entire day assembling and preparing the Perry's mounted Men-at-Arms set.  Today was the undercoating phase.  I would like to continue a bit longer with my Wars of the Roses collection before getting side-tracked into something else.

The inspiration comes each month when I drive up past the location of the Battle of Stoke Field.  I would like to have sufficient Irish and Mercenaries to form Lovell and Lincoln's forces, but so far only Old Glory appear to make the Irish and I have yet to examine those figures (O.G. can be very hit or miss!).

I'm also desperate to get into 'Chain of Command' and Spearhead (both WW2 and Modern).  2013 was supposed to see me make more progress with my AWI collection - this might have to wait a little longer. Being given the 'X-Wing' Star Wars game for Christmas is a wonderful distraction too, but thankfully the models being pre-painted it shouldn't impact on my major projects too much.