In the words of Monty Python... 'And now for something completely different!'  After having spent most of the year painting 10mm redcoats, I was desperate for a drastic change.
Looking around my wargaming room I espied a bubble wrapped object on a piece of cardboard...and this is what I found, only it was just undercoated in black having been assembled at about this time last year and left covered to keep the dust off until my painting enthusiasm for large tank models came back. 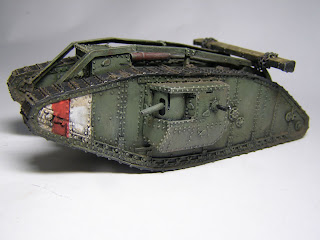 The model is from North Star's Great War Miniatures range.  Unfortunately I can't see tanks shown on the list now, which is a shame as I would really like a Whippet tank to add to my collection.  I think only 1st Corps produce nice Whippets now. 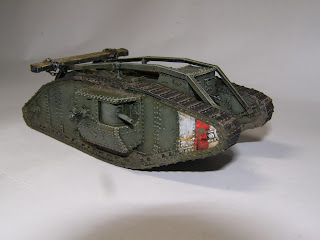 I started applying the paint last Saturday and was unsure which shades to go for.  The best research material appeared to be online. It seems that RAL colours were unknown in 1917/18 (at least as far as modelling forum research has found) and there was a belief on the forums that shades could vary on mixes. 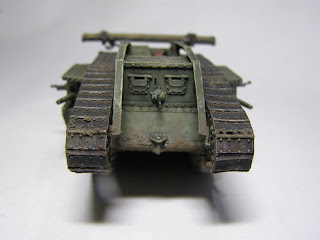 I found a source which showed one of the recently excavated tanks that had been buried by shell fire on the Western Front.  In the less exposed areas there was some green paint showing. Not khaki or brown as often depicted, but quite a strong green, dare I say it not too far off of bronze green. 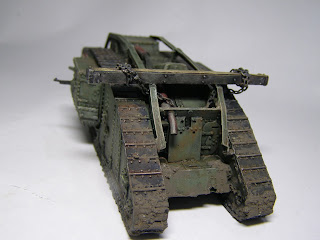 I did try a similar shade on the model and it seemed to over power it.  I changed the shade to make the effect of light more scale, and then with dust and weathering added this is the resulting colour I obtained.  All paints used were Vallejo. 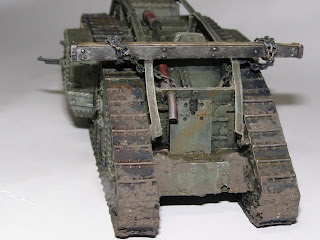 The model was ok to put together. It was a resin model with metal parts. However, the beam tracking was an absolute pig to glue in place and only some bending succeeded in getting it to locate in place.  The chain on the beam was brought as cheap jewellery from Ebay as I thought it might look effective in keeping the beam in place.  Once I scrubbed off the 24 carat gold from the chain (joking), it painted up very nicely. 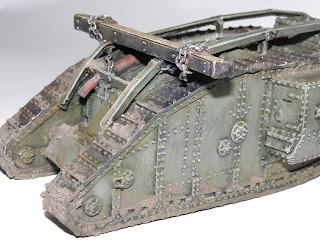 I used some of my mixed basing texture to apply to the vehicle as mud. This also disguised some of the bubbles in the resin so worked very well indeed.  I will apply some decals for number coding when I find a supplier who produces them.  I found some red and white markings online but opted to paint those on instead. 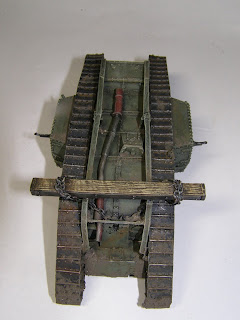 One of the Hotchkiss machine guns is formed from a bent paper clip and green stuff modelling putty and and some glue to form a foresight.  The machine guns are very vulnerable on the model so if the other one breaks I shall use the same method again.  It was good to use the dremel tool which I seem to use far less than I thought. It seemed a good investment at the time! 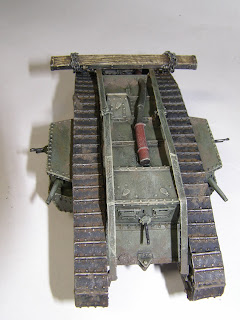 I was amazed to start applying the paint over the overcoat on the Saturday morning and finish it on the Sunday (while also painting 6 x 28mm German 1918 figures).  I seriously thought it was going to take weeks.

This was a really nice fun project, totally different for me and just what I needed.  I think more tanks will follow. There will not be too many in 28mm though, the plan is to use them for a WW1 version of Chain of Command, so platoon sized actions with some supports.  I look forward to seeing it on the field.