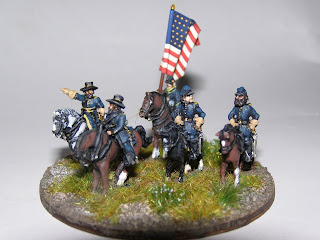 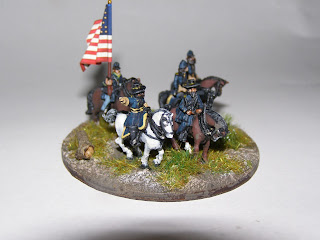 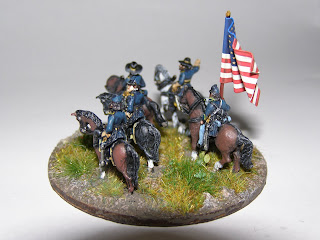 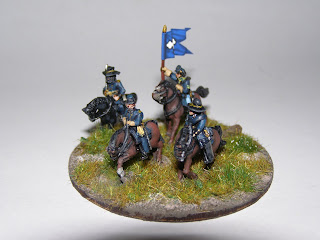 I Corps Commander: Major General Reynolds
The figures are mostly 15mm Blue Moon, especially the staff. The Blue Moon figures are very crisp and are very nice indeed. They are a touch larger than the Old Glory figures who form some of the personalities shown here.  There is even the occasional veteran Minifig painted to the same standard and mingling in surprisingly well. 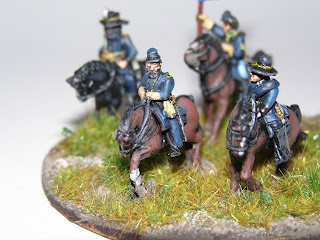 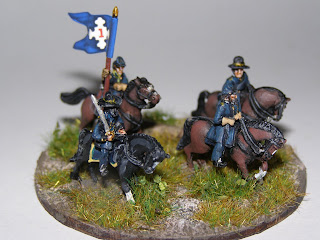 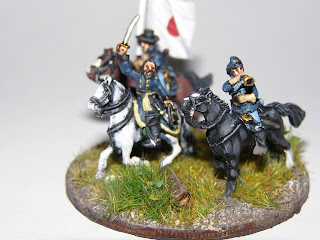 Divisional Commander, 1 Div, I Corps
The flags in all cases shown are from the 15mm range by GMB.  These really are magnificent flags.  I completed nine Brigade command stands today, so I hope the following photos are not too repetitive.  I did shake and blow off the static grass but its only when the photos are enlarged that there is grass clearly visible in some cases, looking quite unsightly too!  I can only assume that the horses must have had a good roll in some grass fodder! 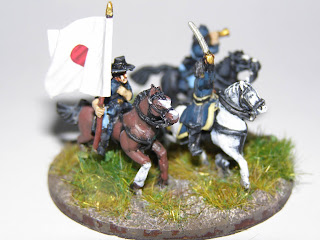 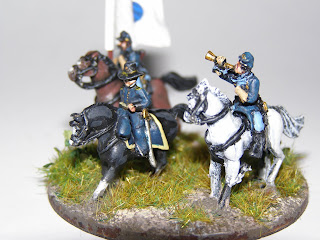 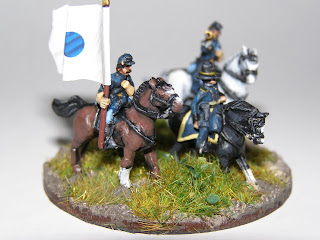 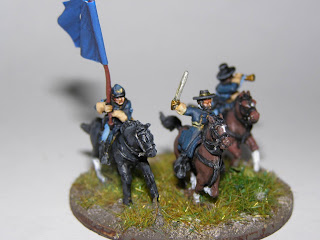 Divisional Commander, 2 Div, I Corps
Out of sequence! I should have posted 2 Div Commander before 3 Div but there we go.  I was just pleased to find a way to get Blogger to post in the correct order and then I messed up these two! 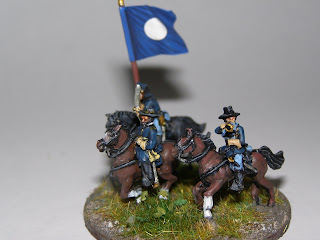 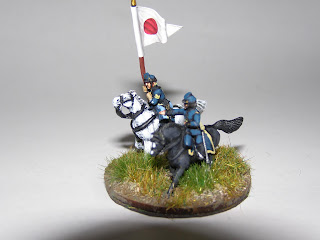 1 Brigade Commander, 1 Div
Flags have been coated with PVA glue. The reason for this was to protect the flag without any of the issues that varnish can cause, such as damaging the ink of the print, or turning the flag glossy.  It also gives strength to the flag, allowing bending without the flag designs cracking. 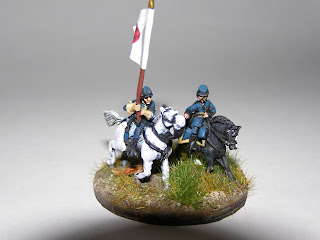 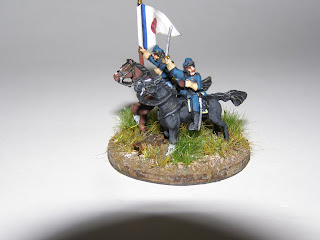 2 Brigade Commander, I Div
I aim to do a photography course this year when the lockdown situation permits.  This will hopefully improve my photographs. I have played with the settings somewhat and this has improved the brightness and removed some of the blur which I normally get.   I tend to balance a day light bulb with one hand whilst trying to take the snap with the other.
If I am too close to the figure then the flash picks up the shape of the lens as shadow (as can be seen above).  I do use flash now and use the 'M' setting instead of the 'Auto' setting. I have no idea what the 'M' stands for, but I think the shutter time is faster now and cuts out my wobble!  I try to keep at least 6" back from the figure and use the zoom on the lens as necessary. 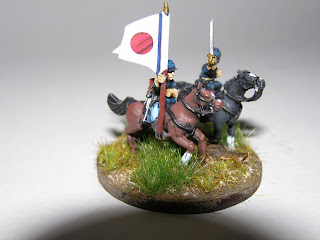 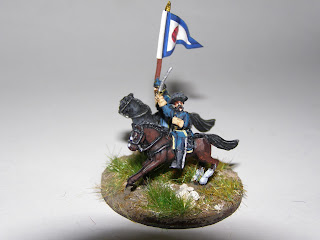 3 Brigade Commander, 1 Div
I plan to use these figures for both Fire and Fury, THE ruleset that made wargaming fun for me all those years ago, and also my much modified Black Powder rules.  It will be Regimental Fire and Fury that I think will be played and maybe some modified command rules as necessary.
I do have the Black Powder ACW supplement, which is a lovely thick book with great information, though I do take issue on some trivial points in it. I also think that by not naming regiments in the scenario unit lists it devalued itself a little. Ah well, I guess it means I'll just have to do more research.
I will not be using their 'smoothbore shoots faster than rifle' rules though, as I have fired thousands of Minies through my Enfields and know just how quick and easy they are to load. 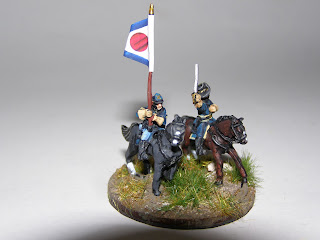 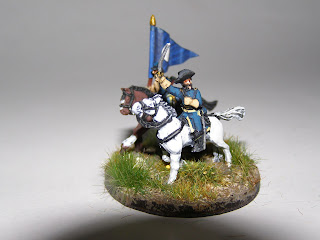 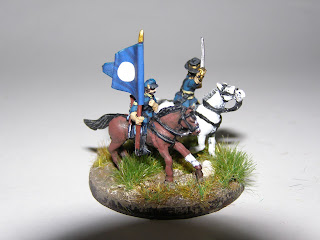 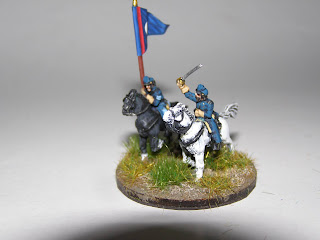 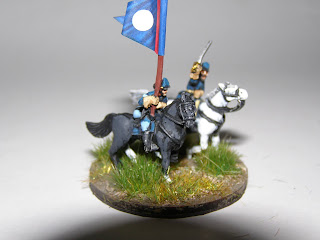 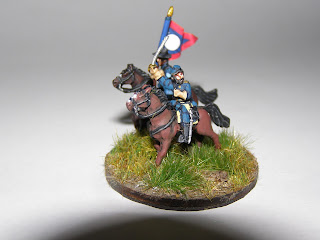 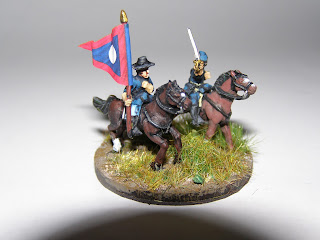 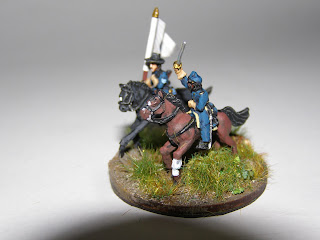 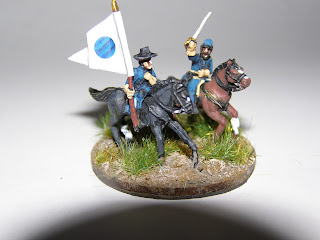 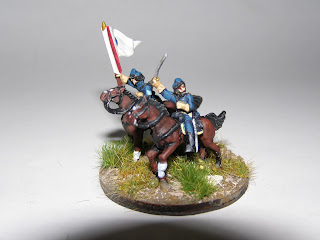 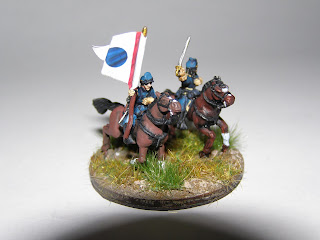 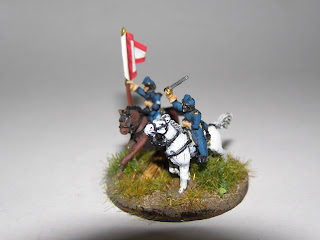 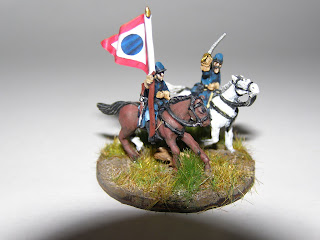 I think that will do for now.  I have Confederate commanders on order, and a Whippet tank for my WW1 British in 28mm.  However the post system is currently badly delayed so I might have to start another unit of something rather than hang on for those to arrive.  I'll decide tomorrow!
Posted by Jason at 02:21